Your Name wasn’t just the biggest movie in Japan last year, it’s the second highest-grossing movie in the country, ever! This film is also the most successful anime feature ever worldwide, ahead of Spirited Away (2001), Howl’s Moving Castle (2004), and Ponyo (2008) from Studio Ghibli. Arriving with widespread critical acclaim, Your Name absolutely lives up to the hype. It’s a stunning work of storytelling that’s captivating, beautiful, and charming. You’ll feel transported when you see it, as its gorgeous animation and spellbinding soundtrack pull you into its world.

It’s a story about a boy and a girl, a tale of separation and connection told through the lives of two teenagers. Mitsuha (Mone Kamishiraishi) is a girl from a small town who dreams of the city, while Taki (Ryunosuke Kamiki) lives in Tokyo and is defined by his awkwardness. The two of them have never met, and don’t know each other, but both begin to experience strange dreams. It doesn’t take long to work out that he’s waking up in her body, and she in his. They’re living out days of each other’s lives before waking up again with no memory of what happened. It’s a bit like a rom-com take on Freaky Friday (1976), before it develops into something much more powerful and emotional.

The animation style uses clever transitions and crosscutting, with particular motifs to keep us aware of which perspective we’re seeing the story from. Your Name has a real rhythm to it, and director Makoto Shinkai has come up with ingenious ways to show information and character development onscreen. But, ever the perfectionist, Makoto has said the film could be even better. “For me it’s incomplete, unbalanced,” he said. “The plot is fine but the film is not at all perfect. Two years was not enough.” Any audience will have a hard time spotting the flaws the director is talking about, though. This is a seamless work of anime that feels deliberate and delicately crafted. 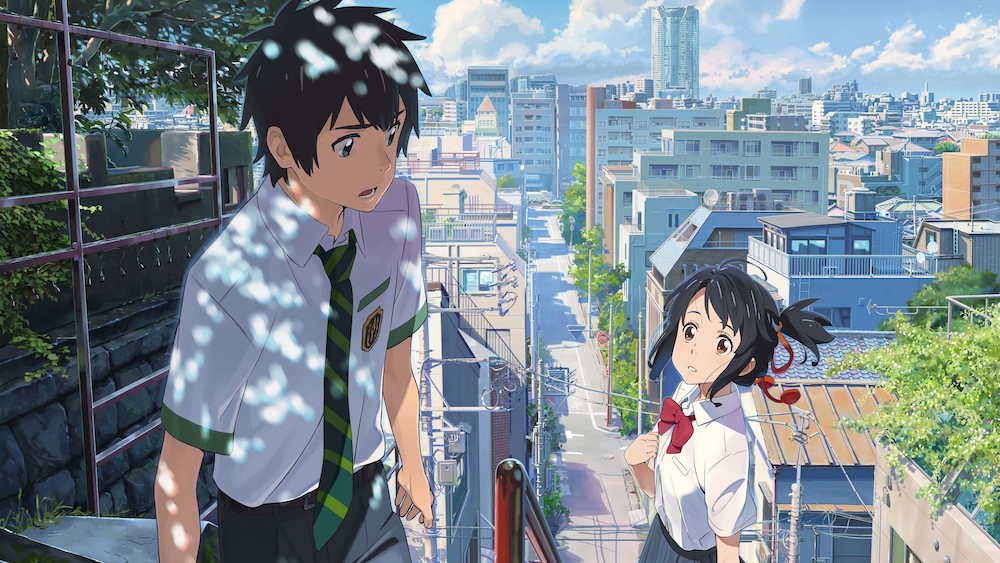 What really elevates Your Name is its emotional depth and nuance. The young characters are treated with respect and never portrayed as naive kids, and that’s what makes this film such a hit with younger audiences. It’s a story about hope, love, and what it feels like to know someone intimately. The film also takes its magical construct seriously, and handles these events with realism rather than contrivance. This is a highly unconventional romance. There are even times when you might forget it’s a love story, because of how committed the script is to develop the characters as individuals rather than as a pairing.

Your Name has a clever story that becomes remarkably complicated but still works because it’s built on simple emotions. The screenplay is designed in such a way that it’ll never take the easy way out of a storytelling conundrum. There are numerous times when it goes for a different and bolder path instead of the simpler or narratively expedient one. There are also a couple of moments where you’ll feel like you might be able to predict what’ll happen next. Only a few elements of the conclusion are unsurprising, and you’d otherwise have a hard time guessing what’s round the corner. 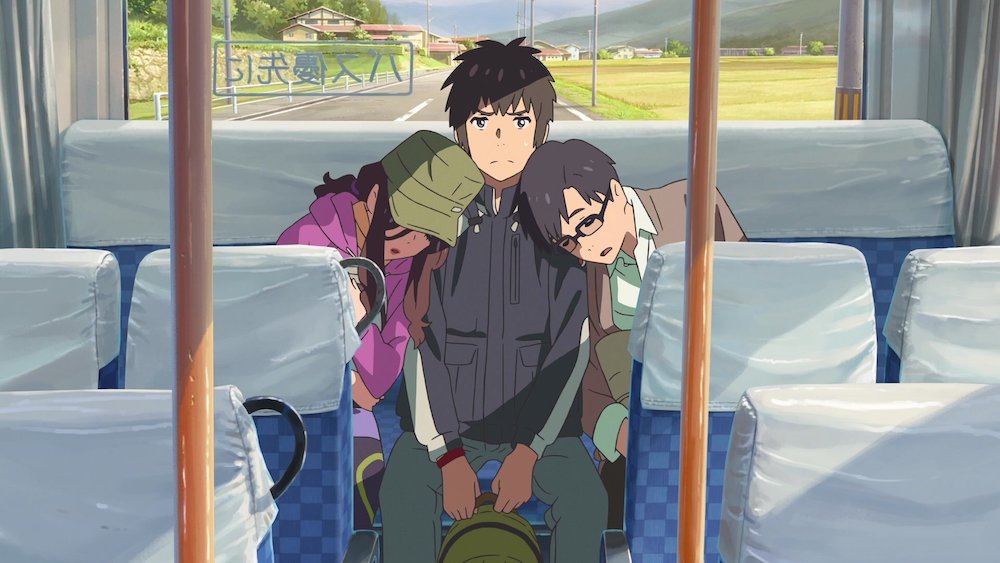 The kind of smart twists and turns that you definitely wouldn’t want to have spoiled beforehand are built into the way the film unfolds, and it consistently keeps you on your toes. This is a movie that challenges you to keep watching for details and clues, trusting its audience to be intelligent enough to make sense of what’s going on. The film also has a larger scope than one might expect. This isn’t just a body-swap, it’s an exchange between different cultures and viewpoints. It’s worth knowing that the themes and story of the film were very much inspired by the reaction to recent natural disasters in Japan, so Your Name’s take on the government, economy, and media should definitely be seen through this lens.

The way Your Name looks at the rural Japanese experience, juxtaposed with a hectic life in the city, makes it an interesting exploration of divergent attitudes, traditions, and behaviours, as well as a rumination on the past and the future of life in the country. Mitsuha often complains of her lack of opportunity, and we see that Taki rarely gets to engage with anyone properly in the big city. The traditions that are kept alive by rural communities are unknown to city dwellers, and ambition is discouraged in the small town Mitsuha calls home. 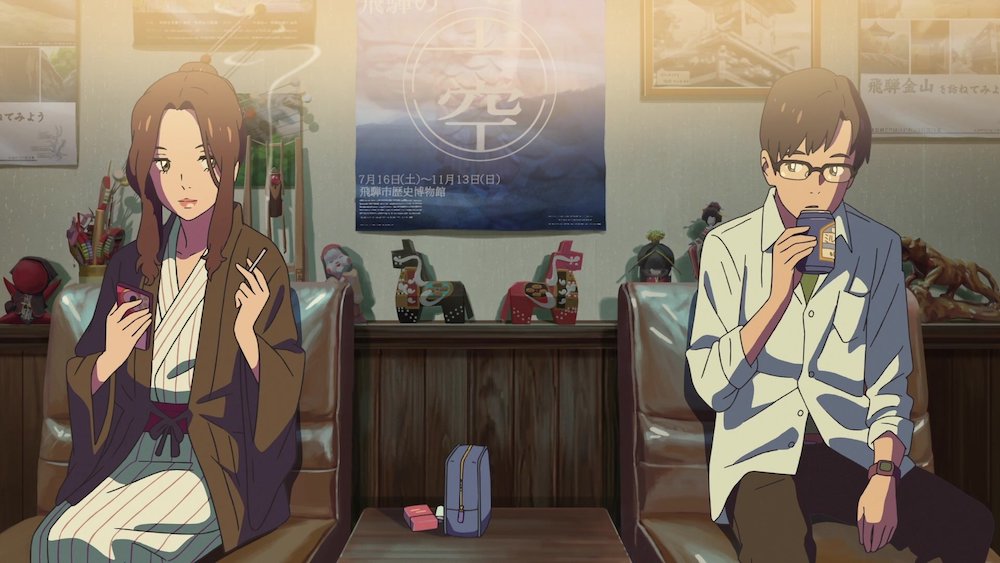 While its mind can often be on weighty things, this is no solemn affair. The movie has a lightness and charm to it that comes straight from the characters, and there’s a lot to love in its delightful sense of humour. There are fun side characters in both strands of the plot, and a lot of enjoyment to be had with the body-switching concept to begin with. Once Mitsuha and Taki work out what’s happening to them, they start communicating by leaving each other notes written on their arms, while also messing with their lives in unintended and amusing ways.

In the end, this is a film that’s refreshingly optimistic about what the future might hold, because it’s hopeful about young people with ambitions and conviction. It may have a lot of critical things to say about the state of Japan in the present, as well as the past, but the film also seems to have hope that change will come. Faith is a major theme here, too, and the climax hinges on a series of improbable leaps of faith that heighten the tension and the stakes at the end.

If you’ve heard the buzz, rest assured that Your Name doesn’t disappoint. It’s a colourful, stunning, smart, delightful little film that also happens to now be the highest-grossing anime ever made. It surpassed my high expectations, and will likely give you the kind of special and rewarding experience one struggles to find in Hollywood movies on the big screen.