There’s a compelling argument against doing a “Mirror Universe” episode of Star Trek: Discovery this early, as it’s less fun seeing bizarro versions of characters we don’t know very well. Thankfully, “Despite Yourself” seemed to agree, because the crew of the USS Discovery didn’t encounter any of their counterparts throughout the entire episode, beyond a viewscreen image of Captain Tilly (Mary Wiseman), who Cadet Tilly had to impersonate.

It made sense to have Tilly be the one instance of “evil twin” fun, as she has the strongest personality “type” there’s entertainment in flipping a switch on — so this Starfleet mouse was given a chance to roar. It has also been nicely foreshadowed that Tilly’s ambition is to sit in the captain’s chair one day, so this was her big chance to show the crew there’s a tough cookie deep inside her. Or a fascist bitch, I guess. 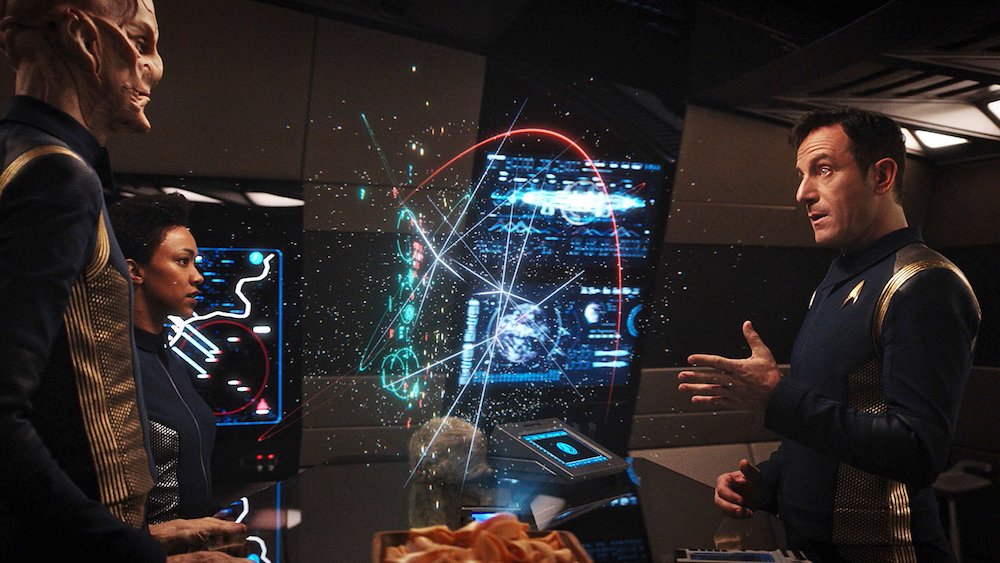 I was worried when rumours circulated that Discovery would be making a trip to the parallel universe famous visited in the original series episode “Mirror, Mirror”, then returned to for instalments of Star Trek: Deep Space Nine (“Through the Looking Glass”, “Crossover”, “Shattered Mirror”, “Resurrection”, “The Emperor’s New Cloak”), and Star Trek: Enterprise (the “In a Mirror, Darkly” two-parter). Both for the reason above, but also because the season’s gone to great lengths to establish itself as a more serious interpretation of Trek, but visiting a parallel universe where the heroes are villains is inherently fun. I needn’t have worried, because writer Sean Cochran managed to bring some weight and credibility to the Mirror Universe than its camp reputation would have you expect. There was a genuine feeling of intrigue and unease about the Discovery crew finding themselves in this topsy-turvy universe, not least when it became clear to them the Federation’s been replaced by the xenophobic Terran Empire.

And while it may have been entertaining to see strange versions of the main characters brought into the story, perhaps wearing beards to denote their evilness, “Despite Yourself” played things more realistically. Although the story’s not over, so maybe things will be played more predictably next week. 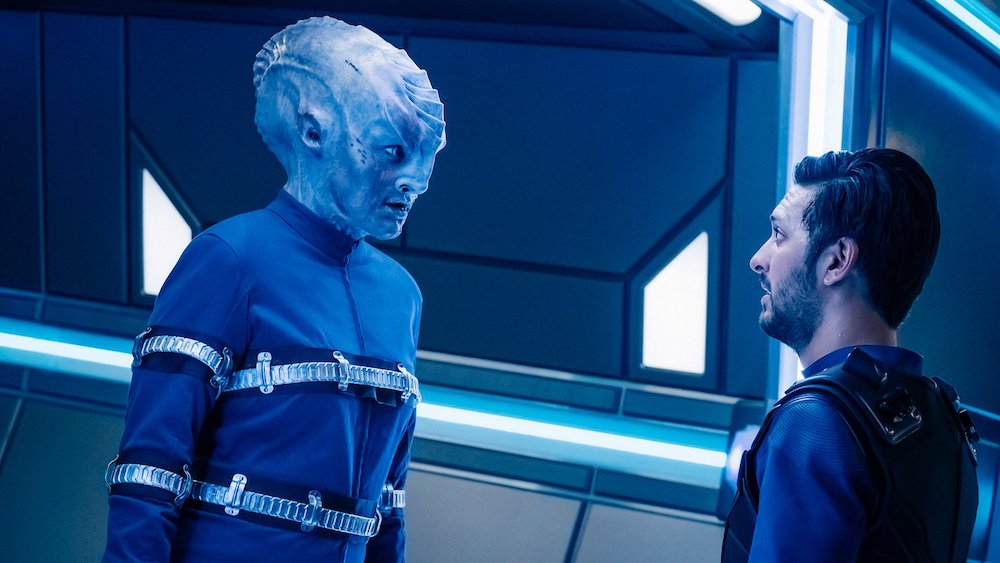 It was a particularly good idea to have Michael Burnham (Sonequa Martin-Green) and Captain Lorca (Jason Isaacs) pretend to be their alternate selves, as both are missing in the Mirror Universe, and thus beam across to the USS Shenzhou as a returning captain with her prized bounty.

Interestingly, a lot of the identity dilemma one expected from a parallel dimension tale came from a different source entirely. It was Lt. Ash Tyler (Shazad Latif) who had to deal with the realisation there’s another version of himself, only this one’s lurking deep inside his own damaged psyche. The idea that Tyler is really the surgically altered Voq (the albino Klingon whose rise to greatness as the next “Torchbearer” was cut short when rivals snatched away his importance), was all but confirmed weeks before the season got around to delivering this twist. That’s a shame, as the producers went to some lengths to keep it a secret, but it was always too narratively suspicious that Voq (in his Klingon form) vanished from the plot shortly before Tyler made his debut… and hasn’t been seen since.

It’s kind of like introducing Lord Voldemort in the first Harry Potter movie, then never seeing him again, but Ralph Fiennes is now playing a new teacher at Hogwarts… 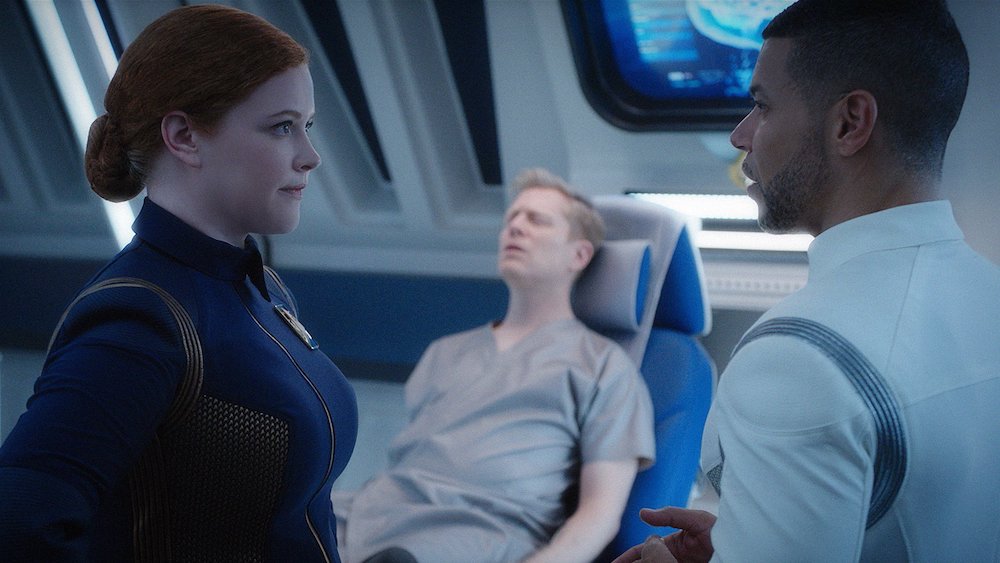 The execution of the Voq/Tyler deception didn’t work as intended, sadly, and requires viewers to ignore logical thoughts that tears the premise apart. Was there a real Tyler before Voq took on that face? And if he was a prisoner the Klingons killed so Voq could assume his identity, has this imposter not communicated with his family since he was rescued from the Klingons? Can’t his family or close friends tell their son isn’t quite himself? Is it enough to explain any changes in his speech and body language as aftereffects of the torture he experiences? Also, is it really believable that young Voq could pretend to be human so unerringly, considering Klingons haven’t been around humans for generations?

Still, I do quite enjoy the fallout of this bonkers situation for Tyler, because he’s a false personality that can’t be shaken off, making him a fascinating mix of a devious enemy who’s been hamstring by his own devious plot, and a likeable guy having to accept he’s his own worst nightmare. And it seems even Voq’s imprisoned associate and lover L’Rell (Mary Chieffo) can’t get through to him now, despite purring a phrase designed to wake him up into his ear. 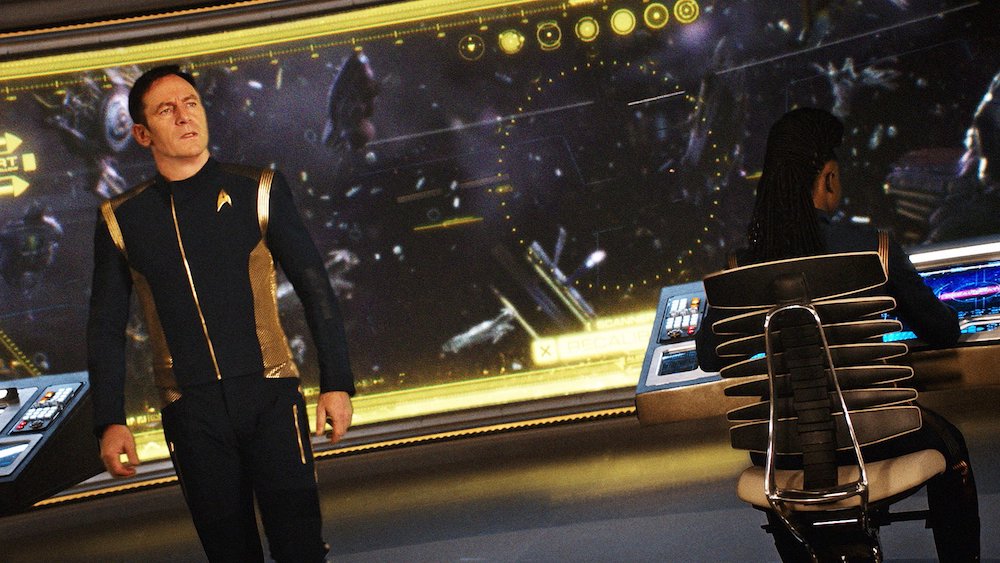 “Despite Yourself” suffers from the fact its two big reveals were guessed ahead of time, but that didn’t stop this hour being a good example of the Mirror Universe strand the franchise has poked around in occasionally. There are bad-ass costumes, the USS Discovery was disguised to resemble a ship from the Terran Empire, some of the characters got to behave unlike themselves (Tilly, Burnham — Lorca doing a Scotty impersonation!), and there were some sinister overtones to how awful the Terran society works (high-tech torture chambers in the brig, and Burnham getting a round of applause from her bridge crew after murdering a subordinate in a turbolift).

Trekkers will also appreciate knowing this hour was directed by Jonathan Frakes (William Riker on Star Trek: The Next Generation), who’s been behind the camera for numerous other Trek TV episodes, plus a few of the movies like fan-favourite Star Trek: First Contact (1996). I won’t say his direction was dazzling or stood out for any particular reason, but it’s nice to know the show is keeping that sense of there being a behind-the-scenes family.

While this mid-season premiere was quite perfunctory in many ways, it again edged closer to what traditionalist fans want from Star Trek, but with a few edgy twists to keep things fresh and modern. I was especially surprised by Tyler snapping the neck of Culber (Wilson Cruz), after the ship’s doctor began to realise what the Klingons did to Tyler was more transformation than torture. Cruz wasn’t technically listed as a main cast member on Discovery, but one assumed he was in this series for the long haul because of his relationship with Stamets (Anthony Rapp), so that was good misdirection. It keeps things exciting and unpredictable, knowing characters are more disposable on Discovery, but there are a few ways Culber might return. Or a version of him, at least…