This week on Game of Thrones, there were two heartfelt reunions, two clever manipulations, a secret plan was put into motion, and everything ended with a fiery finale. Oh, and some people died. Of course. 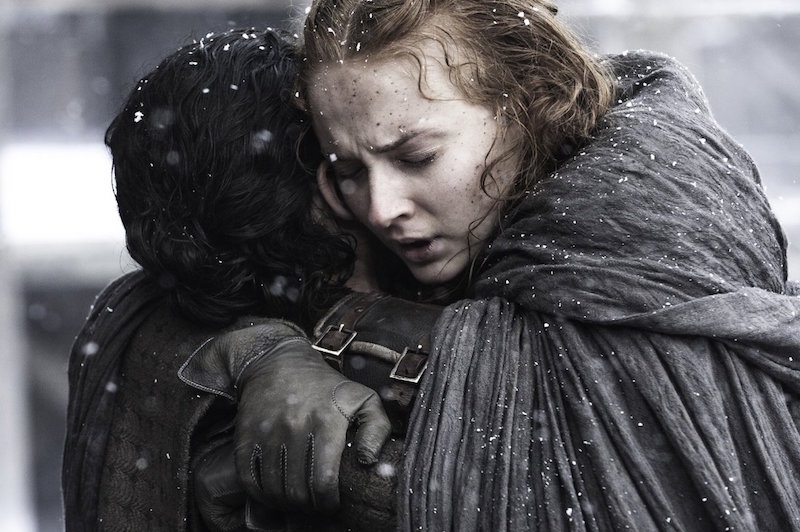 It looked like Jon Snow (Kit Harington) had decided to retire and leave Castle Black immediately last week, but that assumption was wrong. He’s still around for a ‘handover’ with his chosen successor Edd (Ben Crompton), where we learn he plans to head south because he’s done everything he can in the north to try to prepare for the coming White Walkers. Another reason to stay rode into the courtyard soon after, as his half-sister Sansa (Sophie Turner) arrived with Brienne (Gwendoline Christie) and squire Podrick (Daniel Portman) at her side. This marks the first, long overdue reunion of two Stark children, separated way back in the first season, and it was a very touching moment. Sansa’s been through hell since leaving Winterfell (marrying two of the worst human beings alive), and Jon was literally killed for his unorthodox leadership. It’s about time they had a bit of happiness, and it was such a relief to see Sansa safe at last. It was a bit unclear if Jon told Sansa he was recently brought back from the dead during their catchup, but if he did she took that crazy news extremely well.

Anyone else find there’s sometimes a disconnect with the supernatural goings-on during Game of Thrones, as characters who’ve never seen any magic or dragons are surprisingly relaxed once they’re told such things aren’t just myth and superstition?

I’d also completely forgotten the awkward connection between Brienne, Davos (Liam Cunningham) and Melisandre (Carice van Houten), until that very amusing scene when Brienne mentioned she was Renly Baratheon’s bodyguard — who was killed by Melisandre’s dark magic, which triggered Brienne’s entire storyline. Or that Brienne was the one who executed Stannis Baratheon, Davos’s friend and erstwhile leader. Their meeting didn’t descend into a scrap over their conflicting ideals, but I’m interested to see if Brienne has any desire to avenge Renly by killing Melisandre. Also, finally, Davos asked Melisandre what happened to Stannis after realising she now believes Jon Snow is the “prince” who was promised. It does seem odd to have taken four episodes for Davos to ask such an obvious question, as Melisandre’s very presence at Castle Black suggests things didn’t go to plan.

Later in the episode, welcome direction was given for both Jon and Sansa — who became united in a desire to take back Winterfell from Ramsay Snow (Iwan Rheon) after he sent a messenger to Castle Black with a scroll threatening the Stark siblings with torture, gang-rape and GBH unless his wife Sansa’s returned to him immediately. It’s not an unexpected development, but the chance for some vengeance agains Ramsay is going to be worth savouring. Can Jon and a Wildling army of 2,000 beat Ramsay’s 5,000 soldiers?

Oh, and the suggestion that Tormund (Kristofer Hivju) finds statuesque Brienne very attractive was absolutely brilliant. I sort of hope the feeling’s mutual, although Brienne looked uncomfortable being gazed at by the bearded Wildling leader at the dinner table, didn’t she. 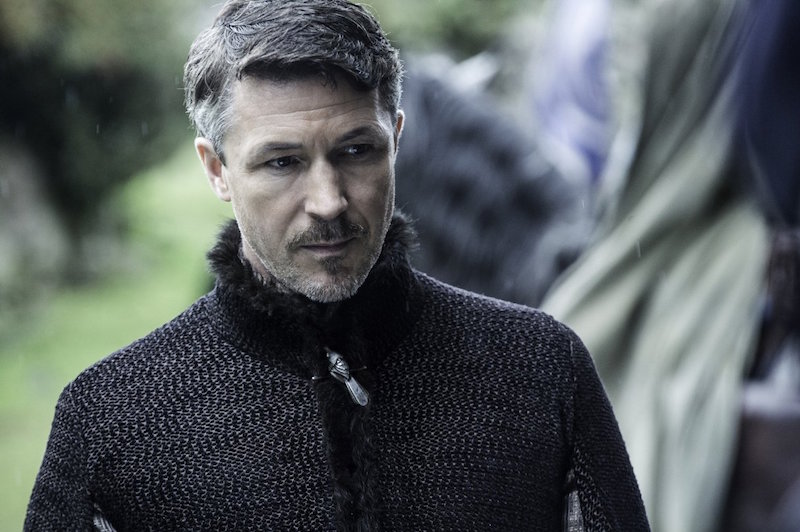 Littelfinger (Aiden Gillen) made his debut in season 6, arriving at Runestone in the Vale, with a plan to persuade the Lord of the Eyrie—his ineffectual little nephew Robin Arryn (Lino Facioli)—to help him protect Sansa at Castle Black from Ramsay Snow’s men. I guess having the knights of the Vale as allies is going to prove useful for whatever Jon Snow has planned, and it feels like a Bolton vs. Stark land battle could become this year’s allotted ‘expensive, action-orientated hour of bloodshed’, no? 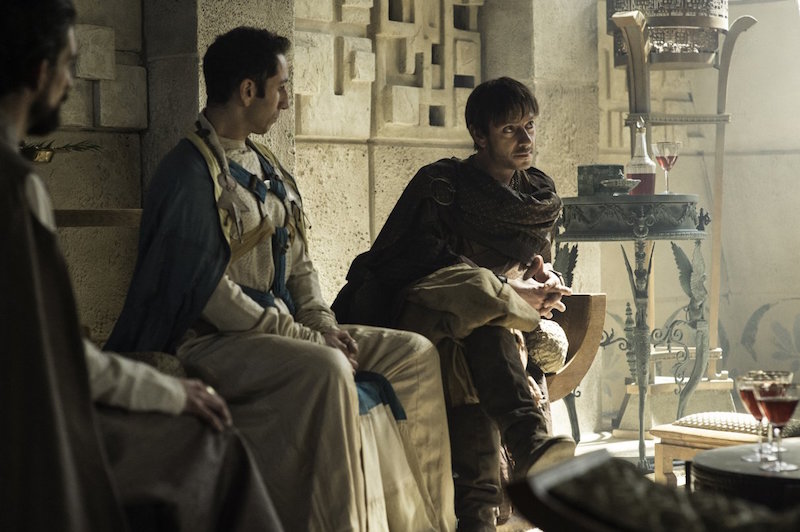 It was great to see Tyrion (Peter Dinklage) continue to flex his diplomatic muscles, with a clever plan to persuade the masters of Slaver’s Bay to stop funding the Sons of the Harpy. Always a clever fellow, Tyrion simply agreed to give their neighbouring cities a seven-year deadline to slowly end the practice of slavery, with the masters compensated for any loss of income. The mention that Westeros abolished slavery centuries ago, and wealthy families like the Lannisters continue to thrive, appeared to seal the deal. Or was it the prostitutes Tyrion threw in as a sweetener? Whatever, it was a clever tactic, and even Grey Worm (Jacob Anderson) and Missandei (Nathalie Emmanuel) had to reluctantly agree with the whole idea, leading them to assure a group of ex-slaves that outsider Tyrion’s plan is the best way forward. Tyrion’s on a high, but we’ll see where things are in seven years… 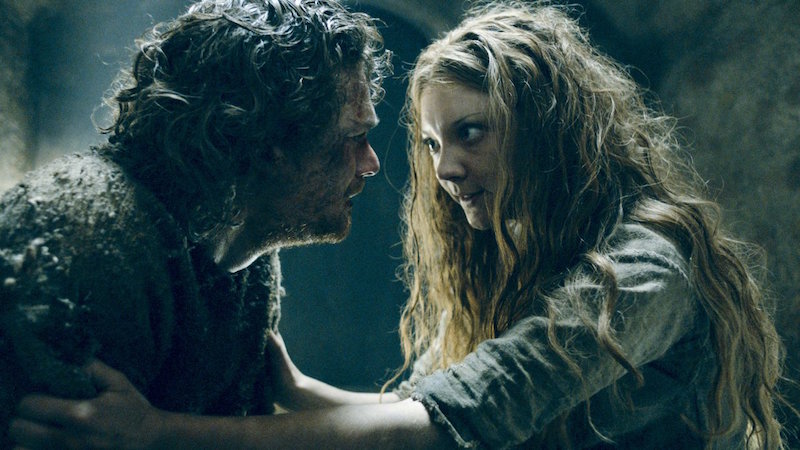 I still find the scenes in King’s Landing a struggle to sit through, because the Faith Militant and High Sparrow (Jonathan Pryce) storyline is severely testing my patience. I just hope Jaime’s (Nicholaj Coster-Waldau) plan to snatch back Margaery (Natalie Dormer), before her own ‘walk of atonement’, using the Tyrell army, will work. I’d like nothing more than to see that sanctimonious High Sparrow’s head on a spike within a few episodes, or perhaps being made to walk naked through the streets himself. Or the Mountain could just smash his skull against a stone wall. Just, please, the characters in King’s Landing need a more enjoyable storyline. Ever since Tyrion left the scene, it’s been a drag. 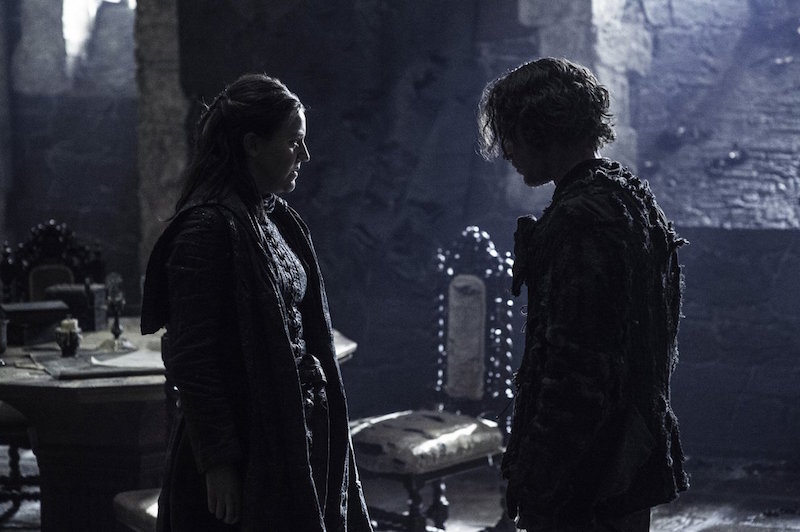 Is it plausible Theon (Alfie Allen) got back to the Iron Islands, by boat, just as quickly as Sansa reached Castle Black from the outskirts of Winterfell by horse? I’ll consult my map of Westeros later. Regardless, it got the story moving forward nicely. I really liked the scene where the humiliated Theon arrived back home, to face his stern-faced sister Yara (Gemma Whelan), who isn’t happy about the debacle her rescue mission turned out to be. The people of Westeros aren’t too sympathetic about notions of brainwashing, but it seems Yara is willing to forgive and forget now her brother’s agreed to support her candidacy to lead the Iron Islands. 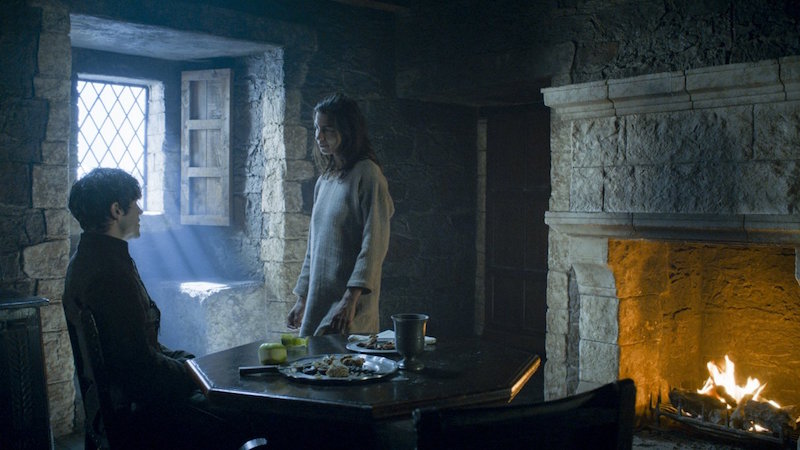 I must confess, not for the first or last time on Game of Thrones, that I didn’t recognise Osha (Natalie Tena) when she was brought before Ramsay, or quite remember who she was. But it was clearly going to end badly for her. Turns out she was the person who helped Theon escape, which I still don’t fully remember happening, but she got herself a knife through the neck nevertheless. There was definitely a moment there when I thought Game of Thrones was going to cause a huge upset by having her succeed in reaching for a knife and killing Ramsay, denying Sansa the pleasure, but thankfully not. 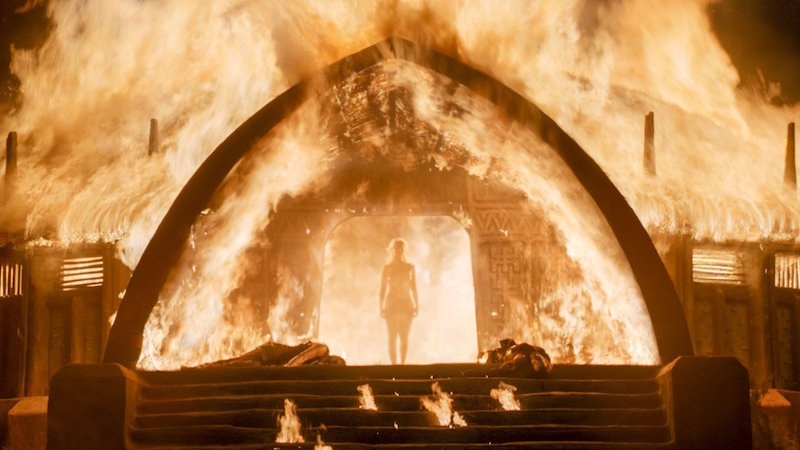 Finally, the episode’s best moments were found in a storyline I wasn’t very interested in before this week. And, to be fair, I still think it’s been a four-part remake of the same story arc Daenerys (Emilia Clarke) went through in season 1 — going from possession of the Dothraki, to their eventual ruler after proving she has fireproof skin. I can see it’s being done so that Daenerys remembers the raw power she wields as one of the few openly supernatural beings in the world, but still.

Before that, however, I once again liked the bickering between Daario (Michiel Huisman) and Jorah (Iain Glen) this week. It’s clear they might have been great friends if they were the same age. Daario also noticed Jorah’s greyscale on his forearm, so things are definitely going to get trickier for Jorah when he’s putting other people’s health at risk by being around them. Does exile await him this season?

The thrilling final moments of this episode contained all the images that’ll swirl around your mind for the next week, of course. I love it whenever Dany asserts herself on powerful but stupid men, who always seem to underestimate her to their cost. It was a delightful moment when she proclaimed herself ruler of the Dothraki, in front of the khals, eliciting nothing but laughter from her captors, then set the whole temple on fire by pushing over two brazier — leading to Carrie-style scenes of the khals screaming for their lives inside the locked temple, as Dany walked around unburnt through the flames. And the final shots of the straw template ablaze, surrounded by thousands of astonished Dothraki men and ex-Khaleesi women, who fell to their knees when the godlike vision of a naked Daenerys appeared at the flaming temple door? Spine-tingling.

One presumes Daenerys will now return to Meereen with the Dothraki by her side, increasing her power and influence enough to dominate that whole region, and turn her attention back to the Iron Throne…

TRIPPED – Series One, Episode One