After the high of last week, similar quality awaited viewers of “The Door”, as this sixth season of Game of Thrones establishes itself as one of the HBO drama’s best. Great news for book-readers awaiting George R.R Martin’s latest opus, although many surprises are inevitably being spoiled by the TV series now. “The Door” delivered another thrilling climax, and one with perhaps the most heart-breaking moment the show’s delivered. 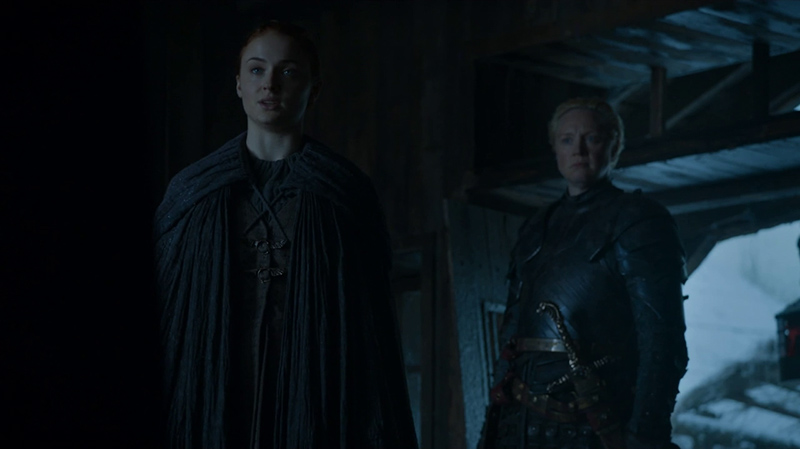 I like how quickly events are happening and, as per usual for Game of Thrones, never quite going to way we expect them to. Littlefinger (Aiden Gillen) arrived with the knights of the Vale, but his secret rendezvous with Sansa (Sophie Turner) at Mole’s Town didn’t go the way anybody was expecting—as his incompetence in allowing Sansa to marry a sadist wasn’t going to be brushed under the carpet. It was also further evidence that, at last, Sansa’s growing up and realising she had to stand on her own two feet. People like Littlefinger may say they have her best interests as heart, and maybe it’s true to an extent, but she’s mainly been a pawn in other men’s games. Enough’s enough. It was a great moment seeing Sansa take charge of the situation, and a surprising move to decline his assistance—as they really need all the men they can get to take back Winterfell from the Boltons.

Indeed, the meeting to draw up their plan of action was very interesting. Jon Snow (Kit Harrington) and Sansa know they need a combined force to even have a chance against the Boltons army, which also includes traitors like the Umbers and Karstarks. A lot of northerners remain loyal to the Stark family, but in further evidence Sansa’s going to be instrumental there was a polite reminder that Jon will always carry the bastard name of ‘Snow’. Can Sansa Stark convince House Manderly of White Harbour, House Mormont of Bear Island, and her famous great-uncle Brynden “Blackfish” Tully to ally themselves with her? I don’t see why not, so Brienne (Gwendoline Christie) now has a mission to personally ask Brynden to join Team Stark. 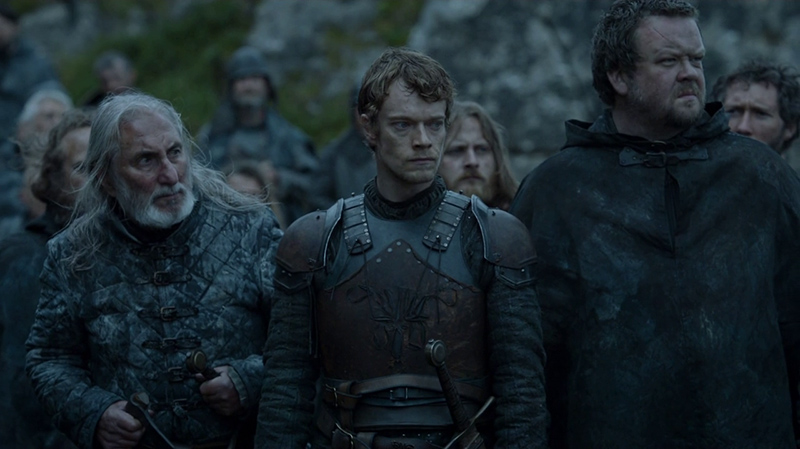 In stark contrast to Sansa’s rise to prominence, pardon the pun, the same cannot be said of Yara Greyjoy’s (Gemma Whelan) predicament on the Iron Islands. It was the day of the Kingsmoot to elect a leader after her father’s murder, and despite a good speech and rousing support from her brother Theon (Alfie Allen), the rightful male heir, Yara failed to convince everyone she deserves to be the very first Queen of the Salt Throne.

Instead, Euron Greyjoy (Pilou Asbæk) stole her thunder by admitting he killed Balon for the greater good of his fellow Ironborn, and that he has greater life experience than his niece and nephew combined. I’m really enjoying getting to see the culture of the Ironborn people this season, who’ve lurked in the background of events beforehand, and in particular Euron’s fascinating ‘coronation’ by drowning him in the sea then dragging his body to the beach and hoping he resuscitates as ‘proof’ the Drowned God gives his blessing. Euron’s plan even made sense: build a thousand ships, sail them over to Meereen as answer Daenerys’ (Emilia Clarke) prayers for an armada, then travel together back to Westeros to take the Iron Throne. Unfortunately, Euron’s plan was dealt a blow by Yara and Theon leaving the Iron Islands with their own loyalists, stealing the Iron Islands best ships, forcing him to build everything from scratch. I know the show cuts corners sometimes with the passage of time and distances being covered, but building a new fleet by hand is going to take months, if not years, right? 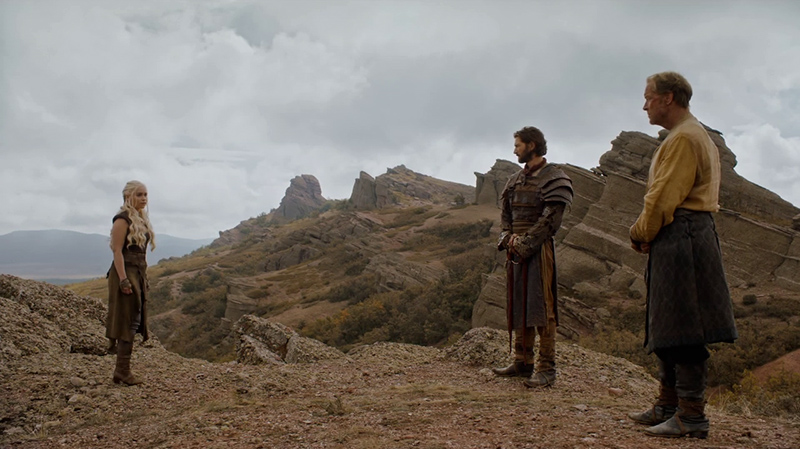 There was only a very small scene this week, but it was thankfully a very moving one. Jorah (Iain Glen) revealed his greyscale to Daenerys of his own volition, and was poised to exile himself to prevent any chance of contamination, only to be given one last mission by his Queen: find a cure for his affliction, somehow, and be at her side when she conquers Westeros. Wishful thinking? A way to give Jorah a sense of purpose while in exile? I desperately hope he’ll find that cure, but knowing Game of Thrones it’s more like Jorah’s going to be killed during his travels or run out of time and commit suicide. But I still want to believe in happy endings, don’t you? We need more of them on Game of Thrones. 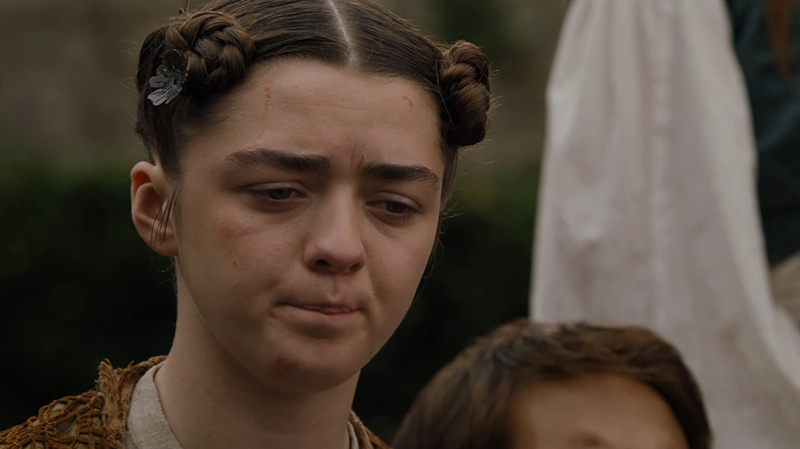 It’s still my least favourite storyline right now, and has been for awhile, but at least Arya’s (Maisie Williams) back in Jaqen’s (Tom Wlaschiha) good books and being sent to kill folk who apparently deserve it. It’s a bit annoying to realise we’re effectively back where we were in mid-season 5, but I still enjoyed the sequence where Arya followed her next intended victim—an actress called Lady Crane (Essie Davis) whose profession pays for her family’s upkeep. This was mainly because it involved an amusing parody of past events we’ve seen happen on the show, as this world’s primarily source of entertainment is telling historical stories—and the tale of Robert Baratheon’s ignoble death, gored by a boar, and the beheading of Nedd Stark, have become comedic performances the crowds come to laugh at. Seeing Arya have to once again witness her own father’s execution, seeing that he’s portrayed as a power-hungry idiot by those who never knew him, was an emotional link way back to season 1—which this season seems particularly keen on back referencing. It was also fun for British viewers seeing sketch comedy legend Kevin Eldon playing the gurning Nedd. 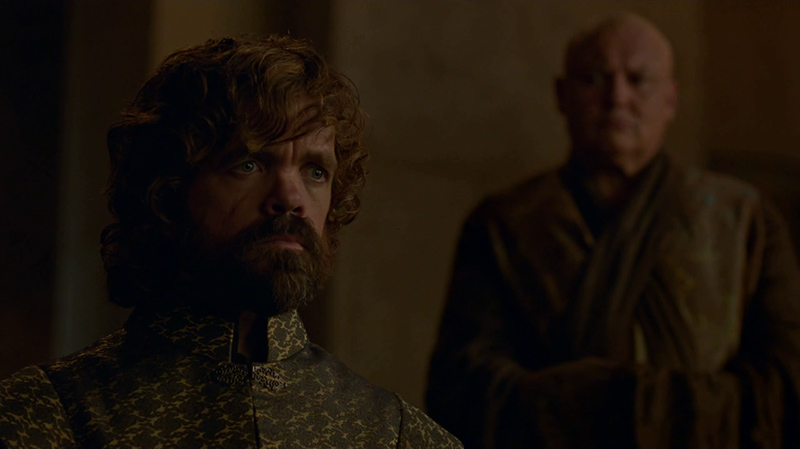 It seems that Tyrion’s (Peter Dinklage) plan to end the Sons of the Harpy’s tyranny by cutting off their finances with the neighbouring slave masters has worked, but the people of Meereen still need to be told their Queen, Daenerys, was responsible for the peace they now enjoy. To aide this, Tyrion recruited the assistance of a Red Priestess, Kinvara (Ania Kukstein), who reveals her faith believes Daenerys is the ‘chosen one’ the Lord of Light has sent them. It makes sense, given Dany’s connection with fire, but presumably these Priestess’s don’t share notes, because Melisandre’s (Carice van Houten) is convinced the chosen one is Jon Snow. Maybe it’s evidence Jon and Dany are fated to share power? Also interesting was Kinvara giving skeptical Varys (Conleth Hill) pause, as she somehow knew the exact details his castration by a magician—which only himself and Tyrion know about. 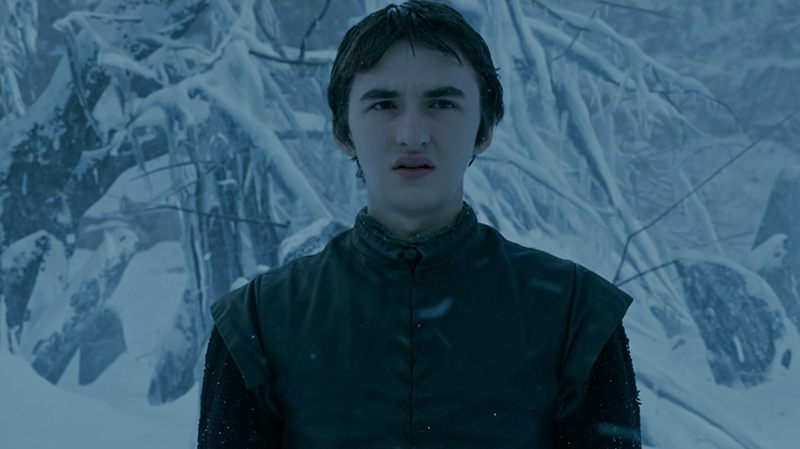 This was where the real heart and power of “The Door” was to be found. Firstly, Bran’s (Isaac Hempstead Wright) journey through Time & Space with the Three-Eyed Raven (Max Von Sydow) revealed a fascinating new piece of information about the White Walkers: they were created by the Children of the Forest, centuries ago, as warriors to protect them from the ‘First Men’. Specifically, Leaf (Kae Alexander) was the person responsible for creating a race of beings they presumably lost control of, by piercing the chest of a captured soldier with dragonglass.

Unfortunately, Bran’s tutoring came to a premature end after an unsupervised trip into the past, where he saw a large army of wights and was touched on the forearm by the fearsome Night’s King (Vladimir Furdik). It was a classic, foolish mistake. The Three-Eyed Raven had to expedite his teachings, knowing the present-day Night’s King would now know their location by making a physical connection with Bran in the past, and the stage was set for an edge-of-your-seat action set-piece as a huge White Walker army arrived at the mouth of the Three-Eyed Raven’s secret cave.

What happened next was a major highlight of season 6 so far, and led to one of its most sorrowful endings. With Bran stuck in a vision with the Three-Eyed Raven during the White Walker’s attack, presumably hastily transferring all his knowledge, it was down to Leaf and Meera Reed (Ellie Kendrick) to try and keep the undead horde at bay and usher the disabled Bran to safety. Easier said than done.

So let’s cut to the chase: “The Door” revealed why Hodor (Kristian Nairn) says nothing but ‘hodor’ all the time, and it was an absolutely gut-wrenching explanation. To escape the White Walkers, Bran found he could ‘warg’ into present-day Hodor and command him to carry him to safety, but via the evidently dangerous means of ‘warging’ into past-Hodor’s mind to create a kind of temporal shortcut whilst unable to break his vision. The result was a necessary escape in the present, but at the expense of young Hodor’s sanity in the past. And as Bran and Meera escaped the cave, swarming with wights, closing the titular door behind them, poor Hodor was left to keep it closed as the undead broke through the wood, as his past self was seen having a fit on the courtyard floor, repeating the phrase “hold the door, hold the door” —which was eventually slurred into ‘hodor’.

It was utterly devastating.

Hodor is a popular character. A gentle giant built for cult worship given his simple kindness and likability. That his story came to an end, in such a tragic but also noble and brave way, created a rich mix of emotions. It’s exactly the reason I love long-form television drama, because it was the culmination of six years spent enjoying a character’s presence. The whole situation is even stranger, when you think about it, because Hodor (or Whyllis) didn’t have any agency at the end. He didn’t choose to help Bran in the future, and his simplemindedness was caused by someone who didn’t exist at the time. Hodor’s a sort of unwitting hero, fated to be an invaluable part of Bran’s experience and ascension. 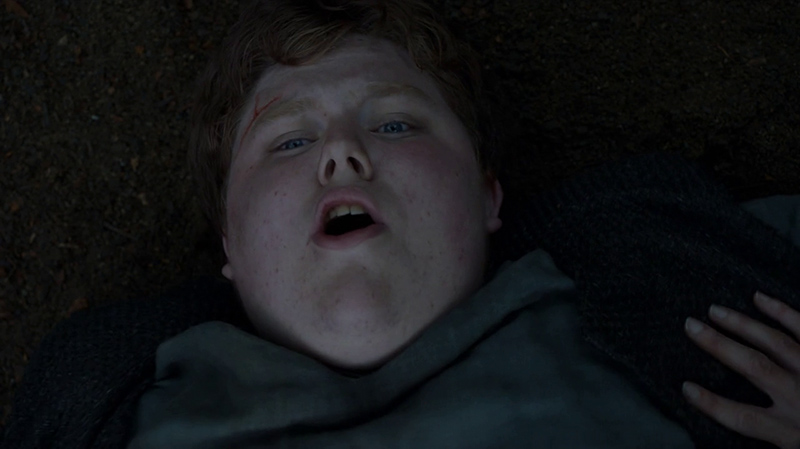 Sometimes, episodes soar because of just one storyline, and “The Door” delivered a wealth of important explanations about the White Walker/Children of the Forest mythology, then capped it with a thrilling piece of action (brilliantly directed by Lost veteran Jack Bender), climaxing with the noble sacrifice of a fan-favourite. There wasn’t a dud subplot anywhere else, and it was frankly nice to get a week’s rest from the dull goings-on at King’s Landing. As we enter the second half of this season, Game of Thrones is having a fantastic year.