It’s the post-Vietnam United States of America. The 1960s have died a bloody death and a collective dream of a hopeful future’s been crushed under the boot of conservatism and greed. You’ve bought the ticket and taken the ride… now what?

Fear and Loathing in Las Vegas (adapted from Hunter S. Thompson’s landmark 1971 novel) isn’t interested in how America found itself in such a predicament, but rather the lost and empty wandering that came afterwards. How does culture, or a sub-culture, react to the rug being pulled out from under it? For some, it was soul-searching; for others, denial. For Hunter S. Thompson and his generously titled ‘attorney’ Dr Gonzo, it was hedonism. A deep dive without a safety net into debauchery and self-abuse.

If that sounds like a dark path to consider, Terry Gilliam’s film leavens any potential heaviness with absurdist comedy and deliriousness. The story, slim though it is, follows Thompson (Johnny Depp) and Dr Gonzo (Benicio del Toro) on a drug-soaked binge through Las Vegas, in a vain attempt to take the country’s pulse and report their findings to milquetoast readers. This approach claims an attitude of ‘I’ve been there so you don’t have to’, but in reality (if there is a reality to this story) their intentions feel murkier and less noble. Thankfully this makes the film less of a didactic sermon and more of a funhouse nightmare.

It’s a road trip movie, essentially, but as the two men speed along desert roads in a beat-up convertible, it soon becomes clear this one has no destination besides the literal. It only has fuel, and that fuel is drugs and booze. Popping the trunk of their car, Thompson rattles off his cache of stimulants like it’s artillery and they’re two soldiers heading into battle. His bucket hat is his helmet and cocaine his gunpowder. In different hands, audiences might be asked to show concern for these crazy characters…. but with Gilliam’s anarchic spirit, we’re invited to laugh at the degeneracy. And that’s not hard, as the film is incredibly funny.

Depp and Del Toro play off each other like a modern-day Laurel & Hardy, each taking turns to be the straight man, neither ever fully achieving coherence. Following Cry-Baby (1990), Ed Wood (1994), and Dead Man (1995), by the late-1990s Depp was proving to be an adaptable Hollywood star who worked extremely well with auteurs. Fear and Loathing in Las Vegas feels like a culmination of his work until that point, as well as a hint towards the large, mannered, inebriated performance that would define his career in the next decade. It wouldn’t get this good again, sadly. Gilliam uses Depp’s chameleonic qualities to make him look less like a movie star and more like a tourist from Arizona. And, more impressive still, he capitalises on Depp’s excellent grasp of physical comedy.

Depp’s Thompson bleats, shouts, flaps and falls—in a slapstick performance which the film is all the better for capturing. We’re never granted access to a fully sober Thompson, and one wonders what teetotal Thompson would resemble. Perhaps he only exists in this state. Del Toro is similarly unrecognisable. He put on 40lbs for the role and grew out his hair. With a potbelly poking out of his tiki shirt and his moustache lying dead across his top lip, Del Toro looks very much like a cartoon. In fact, the pair’s dynamic and energy often resembles a live-action cartoon. Maybe that’s unsurprising given Gilliam’s history with the medium on Monty Python.

One hilarious encounter sounds less funny on paper—Gonzo is lying fully clothed in a bath begging Thompson to throw a tape player into the bath to electrocute him when Jefferson Airplane’s “White Rabbit” reaches its crescendo. It might sound bleak, but Thompson’s sudden sobriety and frustration, and Gonzo’s nonsense is hysterical to watch—helped by Thompson pelting a piece of fruit at his attorney’s head before running out of the room.

Another scene sees the friends attempting to debark a bar located on a carousel… while highly intoxicated, naturally. It’s simple, childish, and a perfect example of physical comedy. It’s not so much that Gonzo can’t leave it, it’s that he’s worked himself up so much about it that he won’t do it. It’s not about what’s happening, it’s about the fear of what might happen.

Fear and comedy go hand in hand throughout the film, such as one striking scene which sees patrons of a glitzy bar transform into reptiles. It’s an excellent moment of practical effects and puppetry—not lifelike, just odd enough to be disconcerting. Perhaps more disorienting than the VFX is Gilliam’s willingness to completely overwhelm our senses. Music is almost constant, characters speak in non-sequiturs, and we’ve jumped to the next location before we can even figure out where we were before! It has a heady effect and before long you feel drunk on it—but the unpleasant kind of drunk, when you know you’ve had one too many, you can’t understand what people are saying, and you don’t remember how you got to where you are. It’s overwhelming, certainly, but this was never meant to be a pleasant trip. It’s not called Chilling and Vibing in Las Vegas.

During a bike race through a sandstorm, Thompson notes that it’s no longer a race but an endurance test. This describes the film itself. Its episodic sketch-like nature is fatiguing, but just when the film starts to come down it reminds you that it’s not all so funny. A wistful Thompson sits at his typewriter, musing that if you look closely enough in the California basin you can see the high watermark that was left. Before too long he’s ankle-deep in filthy water, his hotel room flooded and trashed. Talk about a low watermark. One seemingly peaceful dinner at a local diner turns ugly when Gonzo violently intimidates the waitress because she turned down his advances. Thompson might not condone his friend’s actions, but he doesn’t stop them either. It’s not until now that we begin to realise we have no idea who these men really are, or what they believe in. And that really is the crux of the film. We don’t know anything.

Thompson is the quintessential unreliable narrator, so out of his mind that he doesn’t even know whether he’s thinking things or saying them aloud. America is a country founded on myths, legends and outright lies, and if this is the counter-cultural B Side of American history, perhaps it has just as many falsehoods. If we can’t trust what Thompson is seeing, then how can we trust what he’s saying?

Gilliam’s film has the same wandering looseness of films from the 1960s and 1970s like Easy Rider (1969) and Two-Lane Blacktop (1971), but it also has their rebellious nihilism that feeds off the understanding that everything fed to them is bullshit. The events of Fear and Loathing… are what happens when you go looking for some sort of answer in all that bullshit. And in typical ’60s fashion, there is no answer: it’s about the ride, not the destination.

Fear and Loathing in Las Vegas is so filled with delights, strangeness, and oddities that one can watch it a dozen times and still notice new things. And it’s those details, the sublime experience of watching it, that makes it so special. 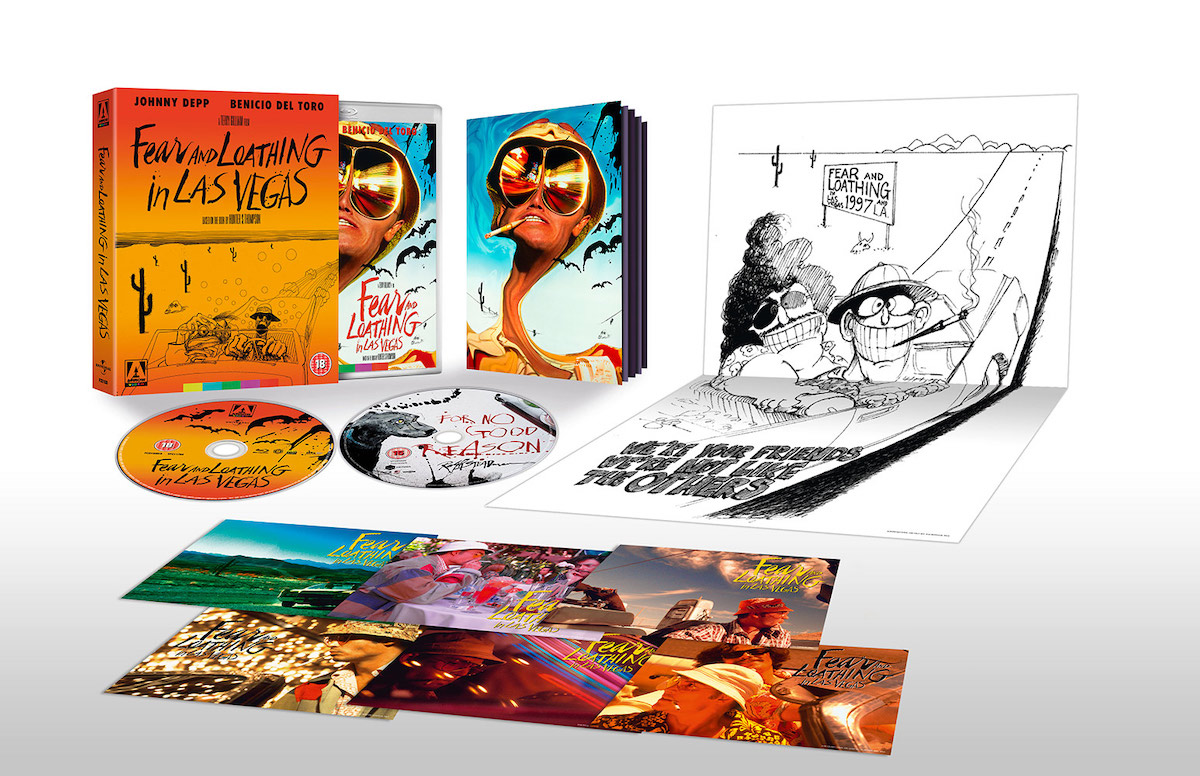