There have been many American movies specifically concerned with the country itself. Few are as biting, inventive, and also endlessly relevant as Easy Rider. It’s not hard to see why the release of Dennis Hopper’s film, about the volatility and polarity of American society, seems as prescient today as it was at the end of the 1960s. But at the same time, the film is very much of its time. This is a film about the ’60s and what the end of that decade meant going forward. The director’s conclusions are anything but positive.

Easy Rider followed a spate of low-budget biker movies made in the ’50s and ’60s in America, many of them starring Hopper. But in truth the film feels more like a western inflected with the European arthouse tendencies of the time. The horses are, of course, replaced by motorcycles. And the cowboys are now drug-dealing hippy types, hell-bent on finding freedom within the confines of the US. That search for freedom was nothing new in the western genre, though. There are countless films from the ’50s about cowboys running from the advancing civilised society. Wyatt (Peter Fonda) and Billy (Dennis Hopper), and their rejection of conformity, recall Kirk Douglas’s cattle herder in 1955’s Man Without a Star. In that film, it’s the barbed wire and fences that divide up the land and constrict him that are the enemy. Wyatt and Billy, on the other hand, simply need to keep moving in order to evade the conservatism of the society that’s already been built around them. 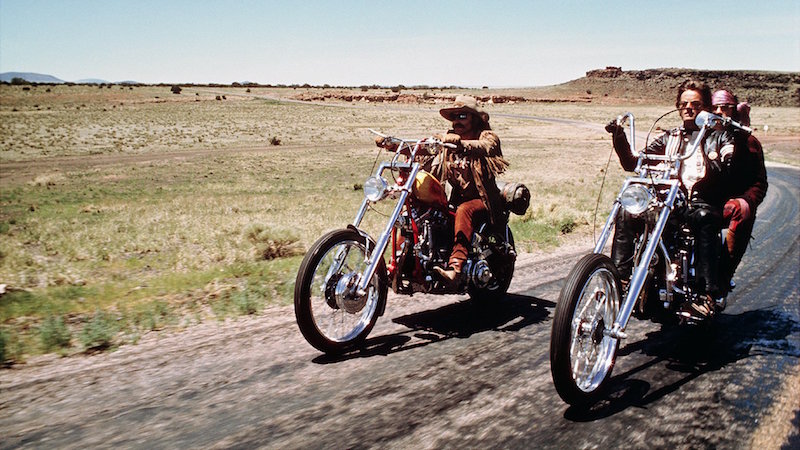 Once they’ve offloaded their drugs to a buyer (played by record producer Phil Spector), they simply want to get to Mardi Gras in New Orleans. The people they encounter on the way shape their journey and provide the contours of the film. The journey is never much fun, though. There’s always a dread and unease that hang heavily over every scene. The first person the pair encounter is a fellow hippy credited as Jesus (Antonio Mendoza), who takes them to a hippy commune that doesn’t appear as free-wheeling as you might expect. There’s a tired eeriness to it, and it’s not long before Billy is freaked out and needs to leave.

Before the commune is abandoned, though, there’s a 360-degree panning shot that surveys the faces of all the men, women and children who live there. Cinematographer Laszlo Kovacs compared it to a renaissance painting. It’s one of many interesting decisions taken by Kovacs and Hopper in the shooting of the film. Instead of cutting cleanly between two scenes, Hopper often cuts back and forth between the next seen and the current one, foreshadowing what we’ll see next before leaving the last sequence. Foreshadowing is used even more effectively later on in the film, and it gets mixed up with the hallucinatory images that are captured when Wyatt and Billy start drinking and popping pills with a couple of prostitutes in New Orleans. 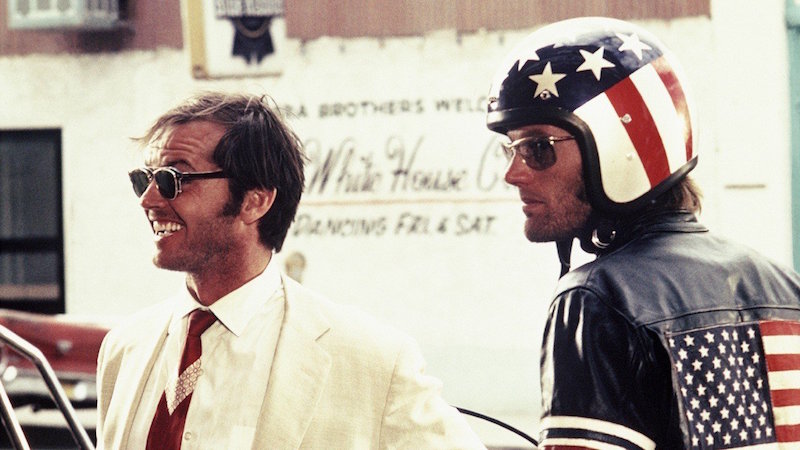 Easy Rider is given a new lease of life when the pair are thrown in jail for “parading without a permit”. It’s here that the great Jack Nicholson makes his appearance and proves why he’s one of the greatest actors of his generation. His character, George Hanson, is a man apart from Billy and Wyatt, while sharing a common spirit with them. He’s a lawyer with a drink problem, and Hopper says he put the character in the film to show that America can even destroy one of its own (i.e. someone who isn’t a long-haired hippy). One of the greatest scenes in the film comes when George smokes weed for the first time with Wyatt and Billy. He refuses it at first, but there is never any doubt in the mind of the audience that he wants to and is going to smoke the weed. It’s a scene acted in a way no one could do better than Nicholson. But he’s not in the film for long before he’s beaten to death for doing little more than fraternising with hippies.

Criterion have now released a few Blu-rays in the UK, and you get the comprehensive package as you’d expect from the brand. The image quality is as perfect as one could ask for a home release and there are plenty of extras to enjoy. Dennis Hopper’s audio commentary from 2009 is illuminating, even if he isn’t exactly in chatty form. Two documentaries from the 1990s give perspectives on the film from cast and crew members, and there are clips from Hopper’s experience of screening the movie at Cannes. The end of Easy Rider is famous for the bleak future for America it points towards, but it (as well as the stunning scene between Wyatt and Billy immediately preceding it) still has the desired impact, no matter how many times you’ve seen it before.

Written By
Ryan Gumbley
More from Ryan Gumbley
A committed film director struggles to complete his movie while coping with...
Read More