A detective investigates a series of murders with the hallmarks of the deceased Gemini serial killer, leading him to question the patients of a psychiatric ward...

William Peter Blatty’s bestselling 1971 novel The Exorcist was turned into a seminal horror movie by William Friedkin in 1973, which Blatty himself wrote the screenplay for. Still regarded as one of the scariest films ever made, The Exorcist was also a rare Academy Awards success for the horror genre which became a genuine pop-culture icon. Its sequel, Exorcist II: The Heretic (1977), had the opposite impact and is considered one of the worst films ever made.

Blatty had nothing to do with The Exorcist II debacle, but in 1980 he began to develop an idea for a film sequel following a prominent character from his Exorcist novel, Lieutenant Kinderman —who was only a minor player in the subsequent movie. Sadly, the two men couldn’t agree on the best way to proceed with the idea, so Blatty turned it into a best-selling 1983 novel called Legion. 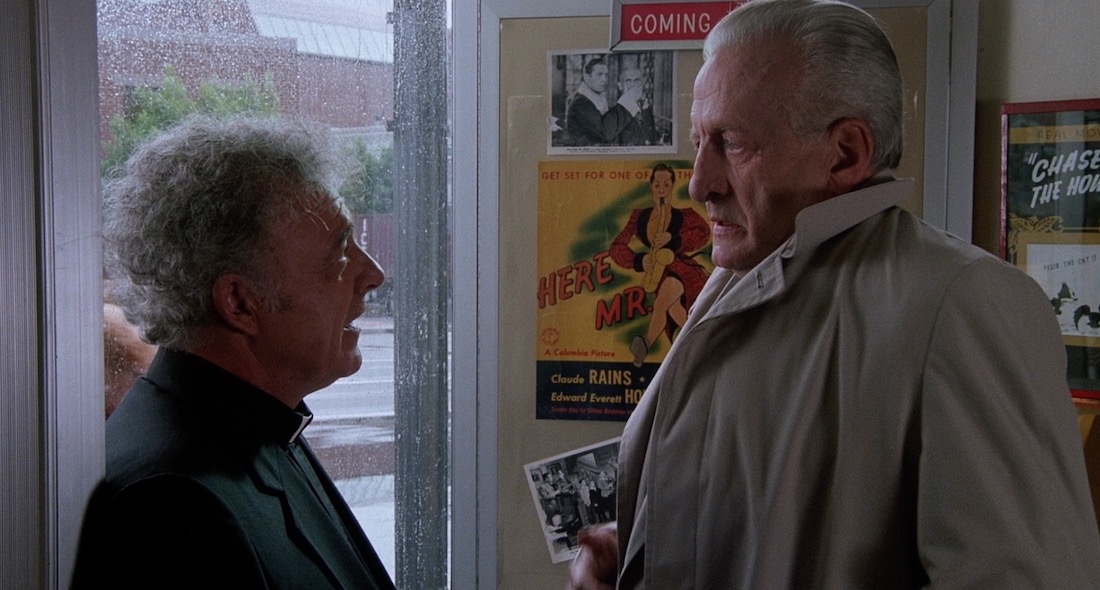 Film studios immediately circled, wanting to adapt Legion for the big-screen. Carolco suggested ditching the idea behind the book and instead basing the story on an adult Regan MacNeil (the girl played by Linda Blair in The Exorcist) giving birth to possessed twins. Blatty opted to grant Morgan Creek the rights instead, but fearing studio interference, he also decided to helm the film himself after his experience making The Ninth Configuration (1980), despite luminaries like John Carpenter (Halloween, The Fog) being in the frame.

Lee J. Cobb had portrayed Lt. Kinderman in The Exorcist but he’d died in 1976, so Oscar-winning George C. Scott (Dr Strangelove) agreed to take over the role after reading the screenplay. He’s never seen The Exorcist but Scott was impressed by the nuances and drama of Blatty’s script and thought it was a cut above most horror films of the time (which were deep into the ‘video nasty’ slasher period triggered by Halloween). A number of actors from Blatty’s first movie The Ninth Configuration also took roles, such as Scott Wilson, and Ed Flanders as Father Dyer (replacing William O’Malley). 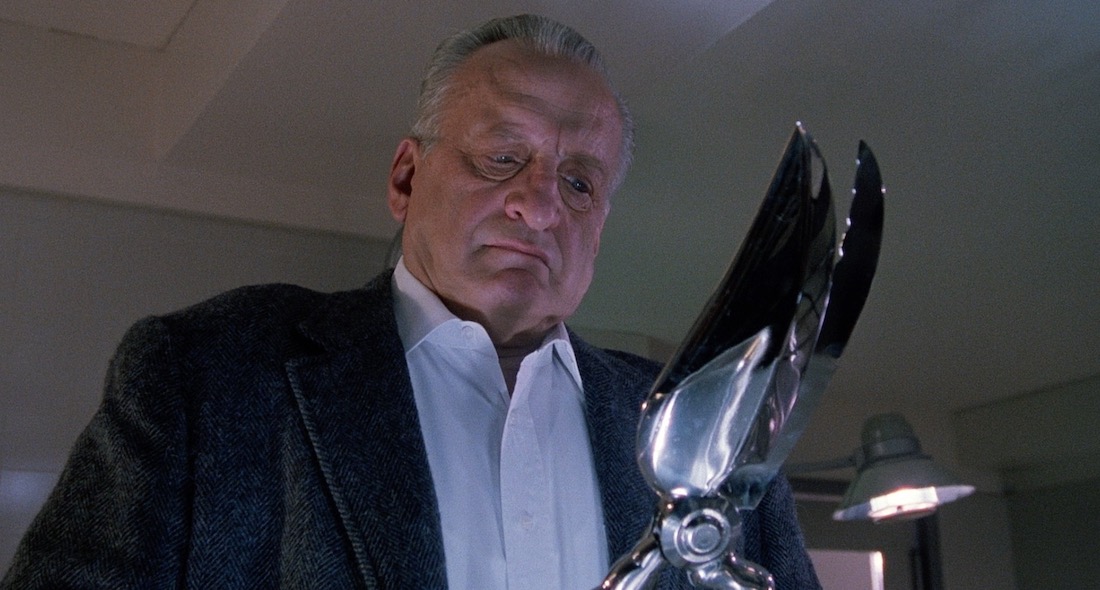 Exorcist: Legion, as it was then being referred to, was shot on location in Georgetown, Maryland, over eight-weeks in 1989. George C. Scott and Blatty didn’t get along during the shoot, but put aside their differences for the sake of the movie. The production went slightly over budget at $11M but was completed on time, although Morgan Creek wasn’t happy with it. It seemed to belatedly dawn on them the film didn’t involve an exorcism, begging the question if anyone had read the script before bankrolling it. You can’t have a movie with ‘Exorcist’ in the title without one, right? Blatty had already altered his novel’s ending but agreed to reshoot the climax to satisfy the studio’s concern. He added a character called Father Morning (Nicol Williamson, another Ninth Configuration alum) to perform a grandiose exorcism towards the end. The reworked climax cost an extra $4M to produce.

The Exorcist III follows veteran detective Lt. Willliam Kinderman’s investigation of a 12-year-old black boy’s murder, on the 15th anniversary of the infamous death of Father Karras (Jason Miller) after he assisted in the exorcism of local girl Regan MacNeil. Then a priest is decapitated and Kinderman’s friend Father Dyer is hospitalised, only to be murdered the next day in his private room by exsanguination. Kinderman’s perturbed once he realises the killings fit the modus operandi of ‘The Gemini Killer’ (Brad Dourif), a psychopath caught and executed 17 years earlier but whose m.o was never accurately revealed to the public in order to wheedle out hoaxers and nutjobs. And things take a bizarre turn when Kinderman’s introduced to a disturbed psychiatric patient claiming to be the late Father Karras himself, who says he’s responsible for the spate of murders despite being isolated in a high-security medical facility. 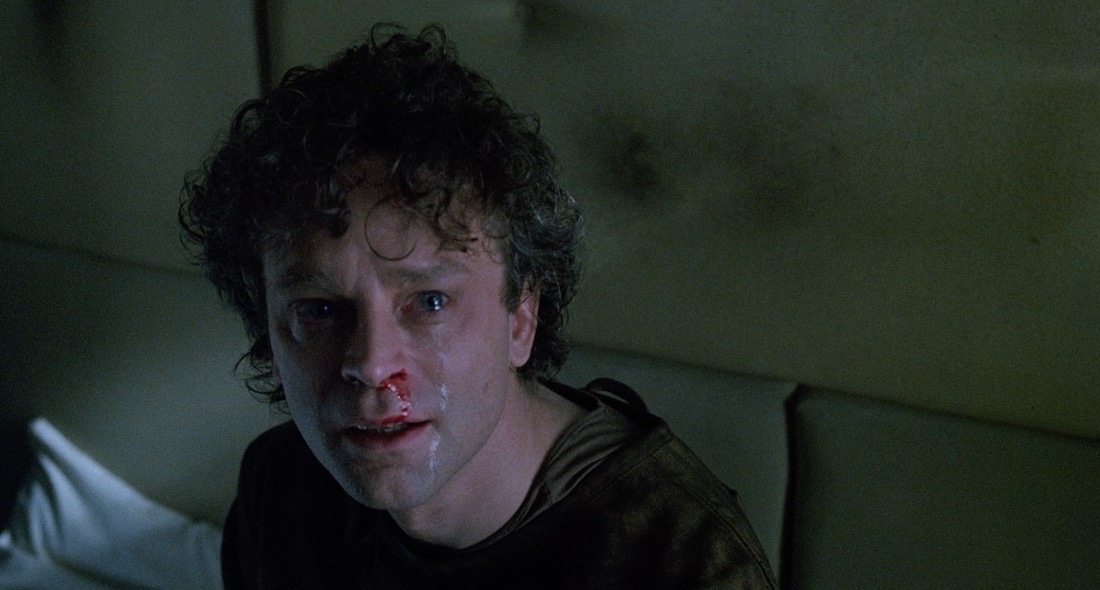 When The Exorcist III, as it had been retitled, was released in 1990 it opened at №1 and grossed $9.3M over its opening weekend. But critics weren’t kind and it stalled thanks to bad word-of-mouth with filmgoers, so only ended up earning $39M globally. Blatty blamed its poor performance on the studio marketing it under the ‘Exorcist’ brand name, rather than simply as Legion—claiming it was either doomed to be unfairly compared to the Oscar-winning original or expected to be a cash-in disaster like Exorcist II. It also didn’t help that a spoof of The Exorcist called Repossessed (1990), starring Linda Blair herself alongside spoof maester Leslie Nielsen, was also in production and hastened the studio to get Exorcist III into cinemas first. It managed to do so and pushed Repossessed’s own release back a month, but having a franchise that had become the subject of open ridicule didn’t help matters at the time.

Blatty was mostly satisfied by how his film turned out, however, even if studio meddling had caused aspects of the story to deviate from what planned. Dourif was intended to play “Father Karras” throughout, but the studio wanted to overtly link the sequel back to the original so they hired Jason Miller to reprise his Exorcist role for some scenes. The compromise was Miller would appear on camera whenever Gemini was channelling Father Karras’ tormented soul, but Dourif would otherwise appear as the mysterious “Patient X” when the Gemini Killer was in control of the host body. 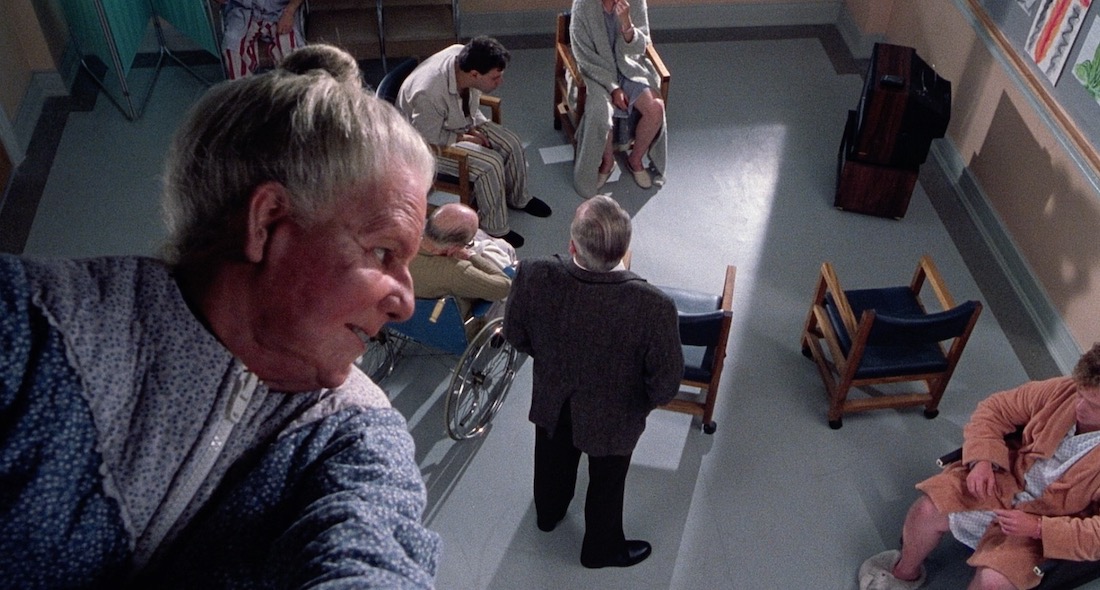 The switching worked well enough, but Blatty preferred his original idea and had to ditch a lot of shot footage with Dourif to make Miller’s appearances work. Dourif later claimed Miller’s role was only limited because the actor was struggling with alcoholism and couldn’t remember many lines—which is why Dourif wasn’t completely erased from the movie. He was the only one who could remember Gemini’s long monologues!

Blatty wanted to release a better Director’s Cut of the movie in the years after its lacklustre release, partly to salvage its reputation with the critics. But, unfortunately, Morgan Creek had lost his unused footage. In 2007, Blatty’s wife issued a statement confirming this ‘Legion’ cut would never be released. However, in 2011, a fan-edit called “Legion” was uploaded online that removed the film’s overblown exorcism and tried to follow the intended arc of Blatty’s story faithfully. It became so popular that Brad Dourif even agreed to host a public screening of this homemade cut in 2012. 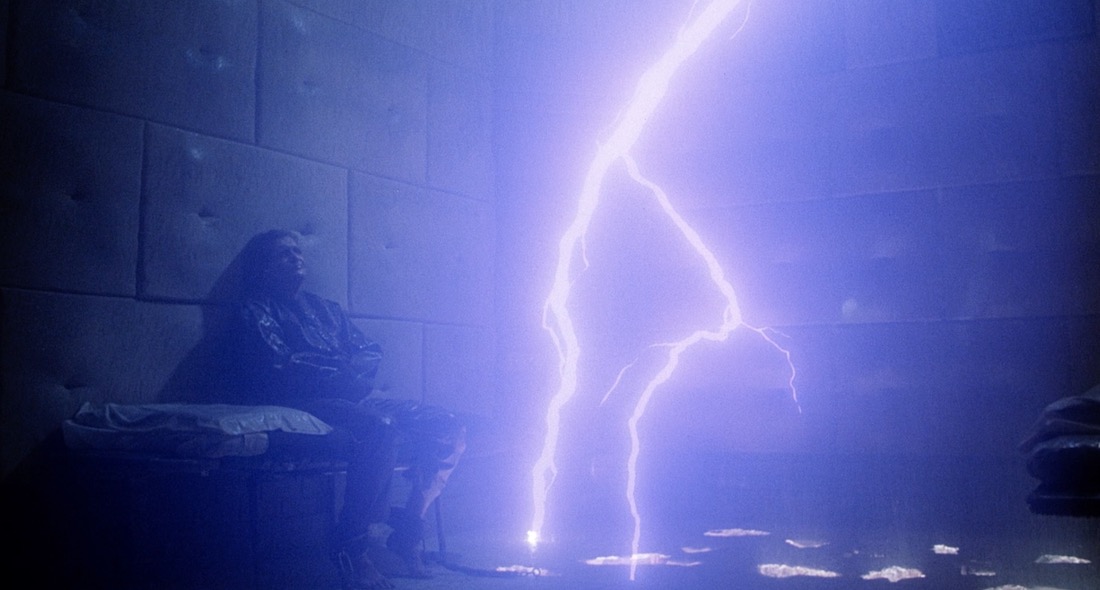 Then, in 2015, something remarkable happened: video footage of Blatty’s dailies were recovered by Morgan Creek. It was now possible to splice those missing scenes back into The Exorcist III, to create what’s become known as The Exorcist III: Legion. There are a number of differences between the two versions, but it boils down to the Legion cut having additional scenes with Kinderman and Dyer to cement their friendship, a complete absence of Father Karras, the restoration of all Dourif’s deleted scenes in his cell, and the loss of the climactic exorcism in favour of a more abrupt ending with Kinderman executing Gemini with a revolver.

It was first released by Scream Factory in 2016 and now arrives in the UK courtesy of Arrow Video. But while fans have celebrated this new version (which Blatty’s lived to see before his death in 2017), there are many who prefer the original version because it’s weirder, gorier, and perhaps more entertaining as a result. But the Legion version is also shorter, which isn’t the norm for a Director’s Cut, mostly because the exorcism scene doesn’t happen. 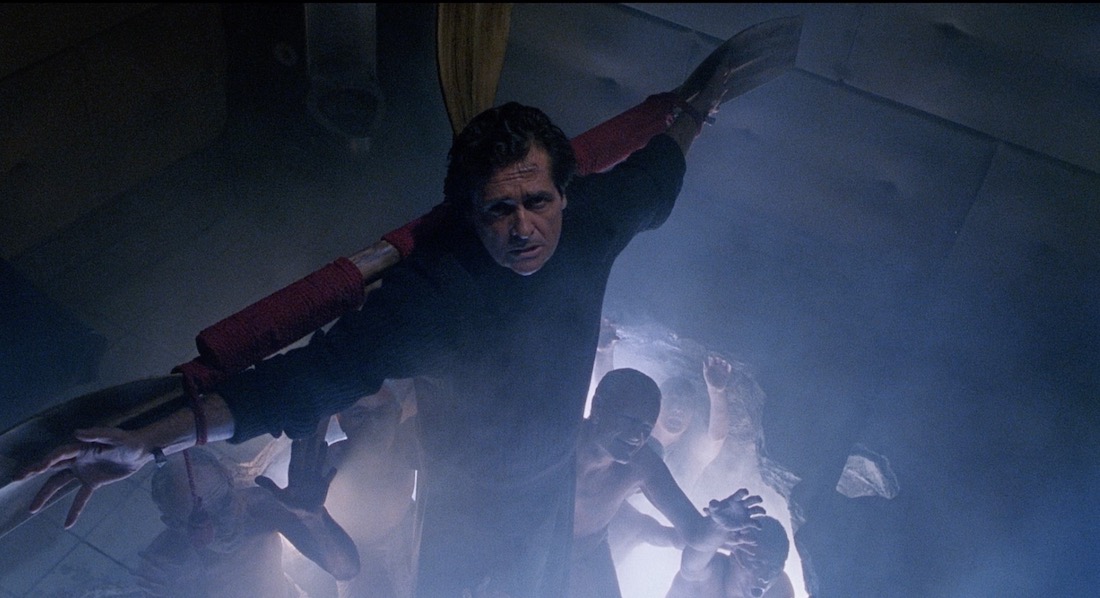 Of course, this still isn’t quite the Holy Grail for Exorcist III aficionados, because a number of missing scenes are still lost. Many of which we only know about thanks to lobby cards showing moments from Blatty’s shoot that have never been recovered on video or film (most famously one with a beheaded priest). Maybe one day those extra scenes will be found, too, so there might still come a time when audiences are again asked to reassess this divisive sequel.

Whatever version you choose to watch (I recommend the more enjoyable and less confusing theatrical cut, then visit the Legion version for an interesting ‘what-if?’ comparison), Exorcist III isn’t a great movie. But it’s a fascinating failure with good moments. There are two main problems: the story didn’t need to be tied into The Exorcist (and would be stronger if it told a separate supernatural story), but even then the plot is haphazardly put together and never rings true. I kept wondering why there isn’t more of a police presence at the mental ward, where people are clearly being murdered in ghastly ways. A lot of questions arise from the investigation that isn’t adequately explored, and when you think about what’s going on, and why, things don’t make a lot of sense. 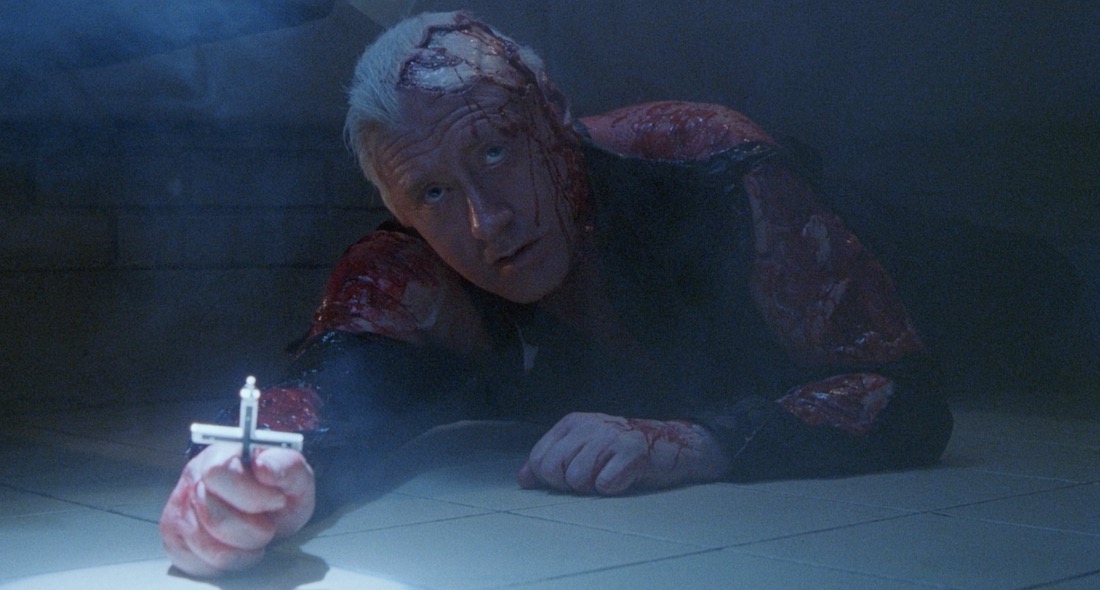 It always seems strange to have an Exorcist sequel that concerns the “haunting” of a serial killer who wasn’t even part of that movie. It’s more like a sequel to a movie that never existed, tangentially connected to The Exorcist because that makes it easier for studio bosses to greenlight. It seems strange Blatty disliked the studio for forcing an exorcism sequence on him because he could have just ensured the source material didn’t have anything to do with The Exorcist. Nobody would have then applied such pressure on him, but perhaps he didn’t want to admit the possibility Legion was only a best-seller because of its esteemed pedigree.

Exorcist III does contain some positives. Brad Dourif’s an engaging and creepy presence as the Gemini Killer, in another of his many lunatic roles. Scott also brings a lot of world-weary gravitas as the lead, making me wonder if he was a minor inspiration for Lance Henriksen’s character in TV’s Millennium (1996–99). And, best of all, the movie elicits a few excellent moments of dread and logic-defying horror —a fantastic jump-scare involving a nurse checking weird noises behind some doors, and a sequence where a possessed old lady with a creepy grin goes unnoticed crawling on a ceiling. The atmosphere is also appreciably thick and unnerving when it wants to be, thanks mostly to some weird sound design with groans and rumbles announcing a demonic presence in the air.

And while the theatrical version’s exorcism sequence in Patient X’s padded cell is ridiculously overblown and bloody, it’s undoubtedly fun if you have a penchant for Bible-thumping hamminess and pretentious hokum. It’s just a shame little else stands up to scrutiny, making The Exorcist III one of the weaker entries in the body-hopping boogieman subgenre popular at the time (Shocker, The Hidden). I’m unconvinced Blatty’s untainted vision would erase its fundamental problems. 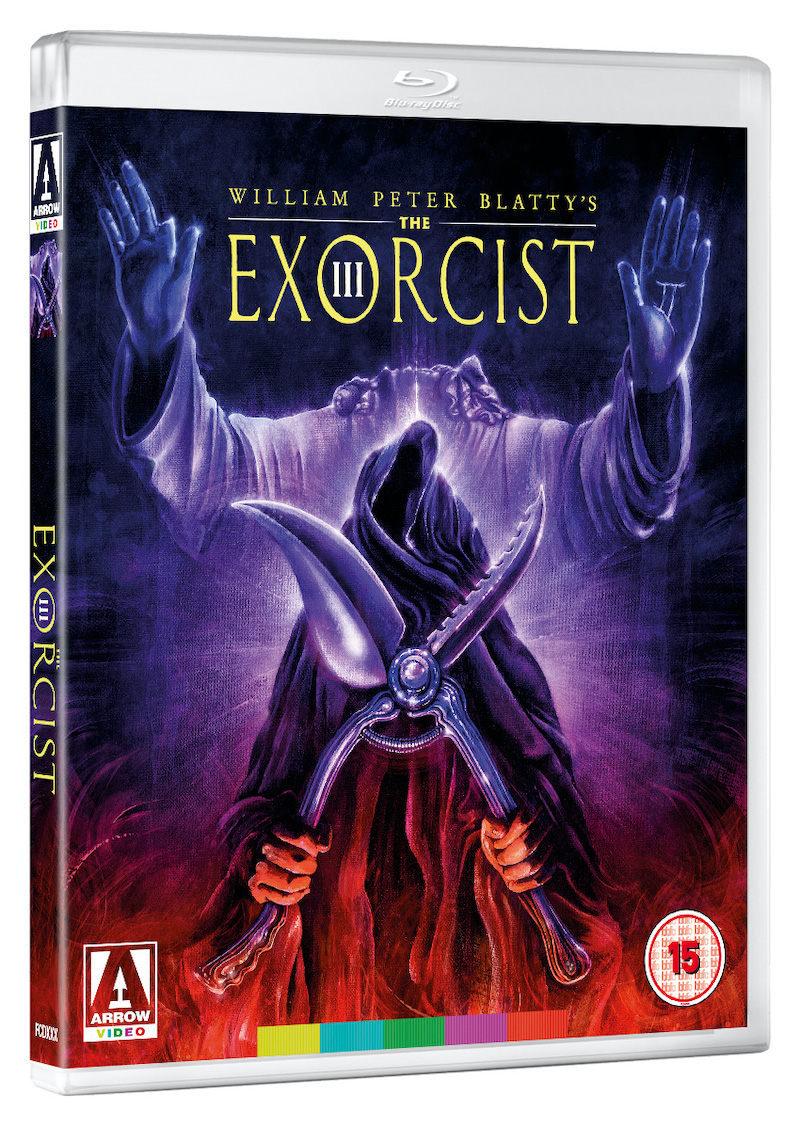 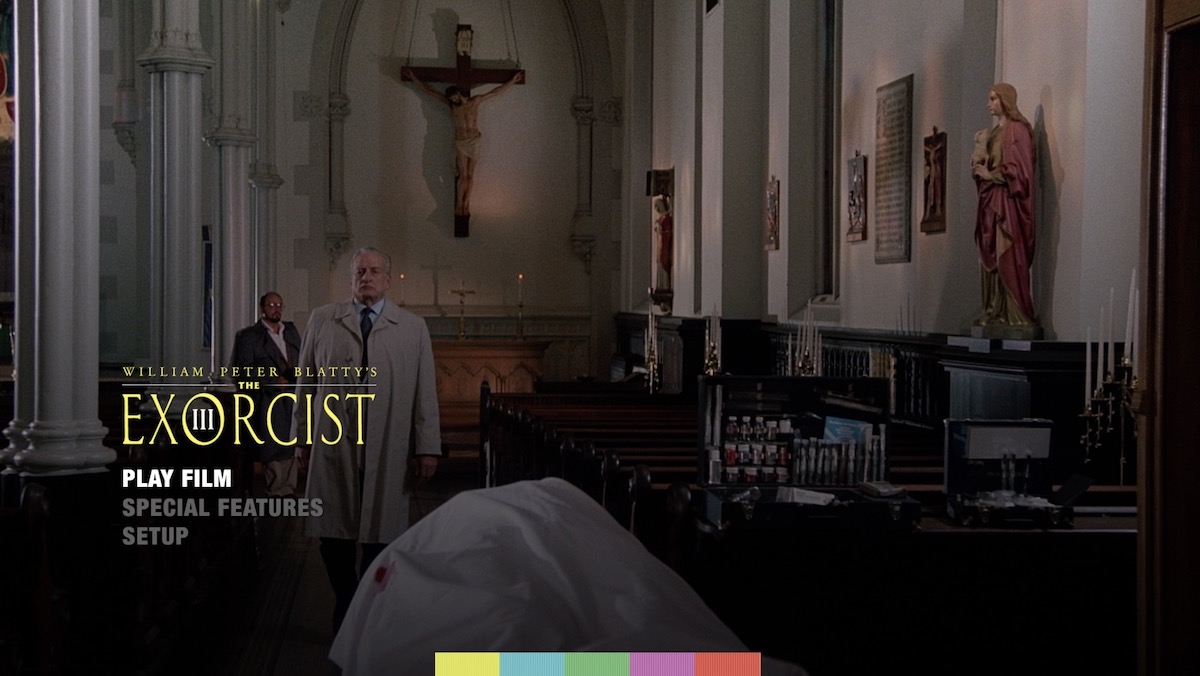 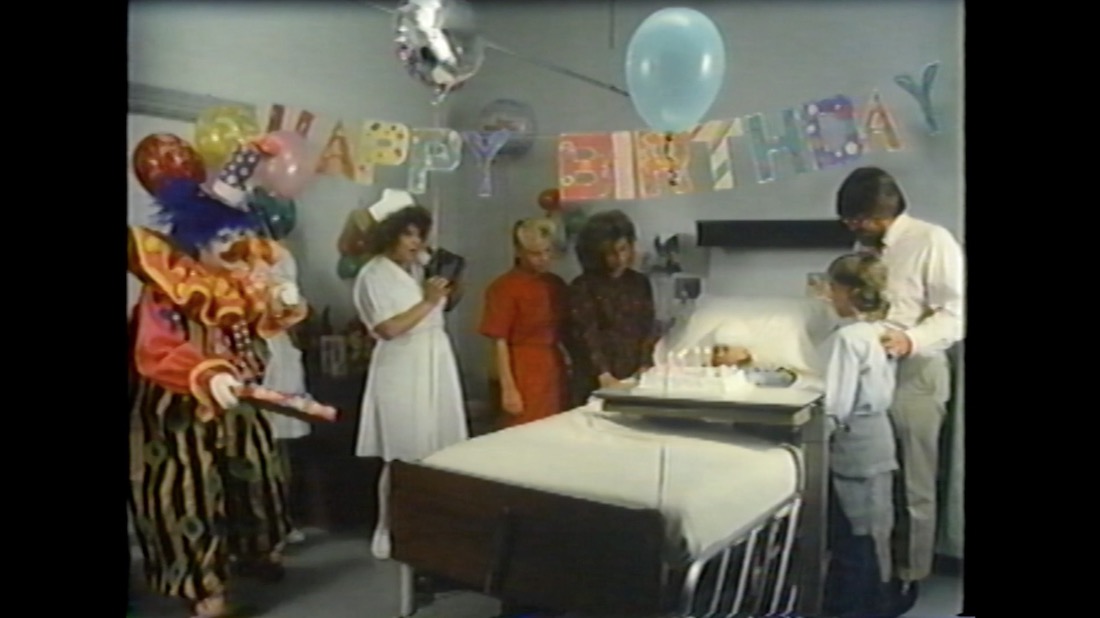 Written By
Dan Owen
More from Dan Owen
I wish Ryan (Manish Dayal) had been written with more nuance, as...
Read More