Up until 1990’s Home Alone, director Chris Columbus was best-known for writing two seminal adventures for kids of the ’80s, Gremlins and The Goonies. We’ll gloss over his directorial debut Adventures in Babysitting, which doesn’t stand up to scrutiny—but all three films exhibit an interest in stories about children without adult supervision, and the trappings of Christmas—so it’s little wonder Home Alone made Columbus’s career, as it combines both his fascinations.

Kevin McCallister (Macaulay Culkin) is the precocious youngest sprog of a large, affluent family in those idyllic Chicago suburbs we know so well from Amblin-produced films of the ’80s. With so many siblings swarming the place, Kevin’s either picked on (particularly by older bro Buzz), ignored amidst the domestic chaos, or underrated because everyone’s convinced little Kevin has it easiest and never bears the brunt of anything. 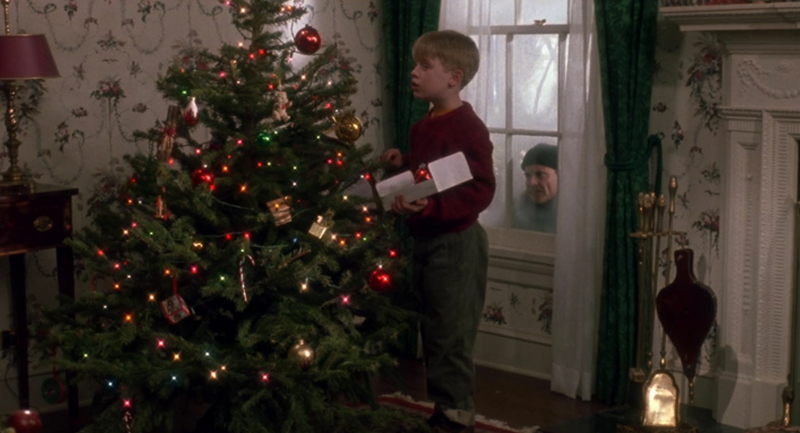 After ironically wishing his relatives away after being exiled to the attic for a misdemeanour by his mother (Catherine O’Hara), Kevin wakes the next morning to discover his entire fifteen-strong family have rushed to the airport for a holiday to Paris, and in their haste have forgotten to bring Kevin along. Of course, while it’s a nightmare for his parents when the penny drops somewhere over the Atlantic Ocean, for awhile Kevin believes being ‘home alone’ is the perfect early Christmas present: he has the freedom of the house, can eat whatever junk food he wants, read a hidden Playboy, watch grown-up movies, play with an air rifle, and generally hang out as the master of his own tiny world. Unfortunately, Kevin’s going to have to contend with Harry (Joe Pesci) and Marv (Daniel Stern), two dimwitted men currently burgling his neighbourhood, scouting rich homes that are empty for Christmas, with the McCallister residence their next target…

Home Alone was a massive hit upon release, becoming the third highest-grossing movie of all time in 1990 (behind Star Wars and E.T – The Extra-Terrestrial), and it remained the highest-grossing live-action comedy film of all time until The Hangover Part II came out in 2011. Keeping a record for 21-years is no easy feat, so people clearly responded very favourably to this film. I think it’s mainly down to how it successfully captures a childlike view of the world, and riffs on every kid’s fantasy of being left to their own devices, coupled with the dependable fantasy feel of all-American Christmases, and the extra anarchic bite of the final half-hour becoming a live-action Looney Tunes cartoon. 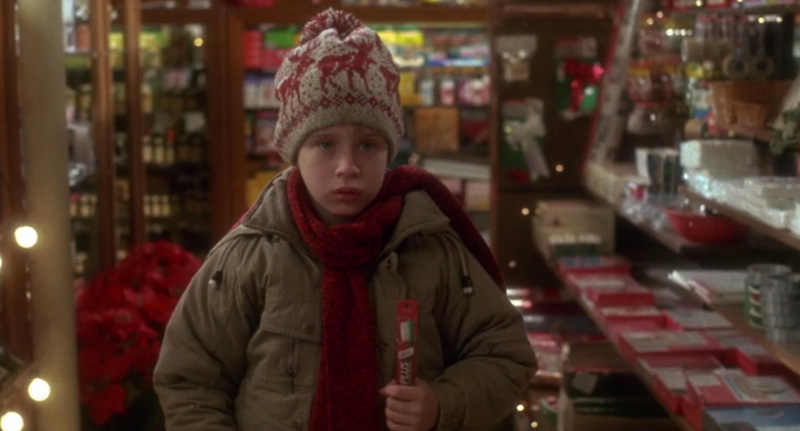 I first saw this movie on VHS and television broadcast in the early-’90s, and to be honest don’t think I’ve sat down to watch Home Alone from beginning to end very often. For me, it’s always been one of those movies (certainly when I was in my early-teens) that you’d fast-forward to get to the third act—where most of the crowd-pleasing material can be found, as Kevin rigs his house with homemade booby-traps and essentially tortures an ‘evil Laurel & Hardy’ with red-hot door knobs, a blowtorch, falling irons, paint cans on swinging ropes, and an escaped tarantula. Those moments are what Home Alone is known for, but it’s led to the much of the film’s preceding story being forgotten about.

For instance, until this latest full viewing, I had no memory that Pesci appears in the opening scene as Marv—disguised as a cop checking the McCallister residence for security flaws, whilst actually on a recce so he can rob it while they’re on holiday. And a number of things about the structure of the film pleased me more as an adult than I remember as a teen, like how Kevin matures over the course of the film and becomes self-sufficient.

It’s Kevin who overcomes his fears—symbolised by the ‘spooky next-door neighbour’ he’s been told is a serial killer, but discovers is just a lonely old man who also doesn’t have a family this Christmas. By the end of the film, Kevin’s earned the respect of his family for surviving without them (saved their community from two robbers, although his bravery actually goes unmentioned!), and was the one with the wise words that led to his old neighbour making amends with his estranged son. 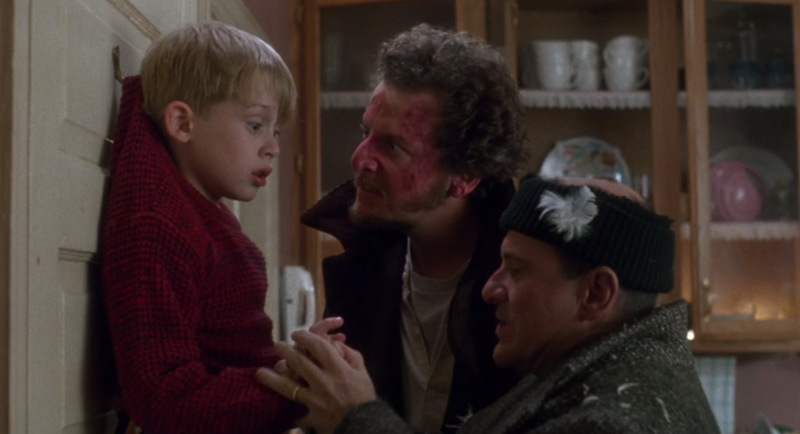 It’s a pretty simple story, really, but John Hughes’ script hits its marks. I wasn’t as bored as I thought I might be before the cartoonish climax begins, although tastes have changed in the intervening years and I found quite a lot of Home Alone’s traps rather sedate by today’s standards of on-screen mayhem—although God bless Daniel Stern for having one of cinema’s most hilarious high-pitched screeches, which keeps his moments something to savour. (His reaction to getting that big spider on his face is one for the ages.) But if they ever remake Home Alone, one suspects the violence would be ratcheted up several notches. I hope they never do that, though—not least because the narrative contortions required to tell this story in the era of mobile phones and video-calling wouldn’t be pretty!

You can’t review Home Alone without mentioned child star Macaulay Culkin, of course. There are moments when his performance has the feel of a kid being told to say something seconds before the camera rolls, or when his inflections don’t sit quite right, but otherwise it’s easy to see why this was a breakout movie for him. It’s just a shame Culkin’s fame only resulted in a weird friendship with Michael Jackson (cameoing in his “Black or White” video), a sequel, and a few other non-Home Alone projects of mixed quality… until his cuteness got warped by adolescence and people began to realise his talent wasn’t much beyond being able to raise-and-dip his eyebrows on cue and scream into the lens.

It was inevitable a sequel would be made after the original’s incredible success, and Home Alone 2: Lost in New York daren’t alter the winning recipe. The storyline may call into question the title—Kevin’s never ‘home alone’, per se—but almost everything about Home Alone 2 cleaves close to the first film’s events. History repeats itself, in occasionally unlikely and preposterous ways.

One year after the events of Home Alone, the McCallister’s are destined for sunny Florida for their Christmas break, and the sequel has early fun teasing us over exactly how and when Kevin’s going to part company. Their youngest at least makes it to the airport this time, but in a moderately plausible turn of events (involving a lookalike of his father, and a foreign passenger he ignores with headphones) Kevin winds up on a different plane destined for New York City. Arriving in the Big Apple all by himself, our little hero once again makes the best of a bad situation by using his father’s credit card to finance a stay at the luxury Plaza Hotel—where he’s eyeballed with suspicion by supercilious concierge Mr Hector (Tim Cury), but nevertheless bluffs his way through a few day’s city break. 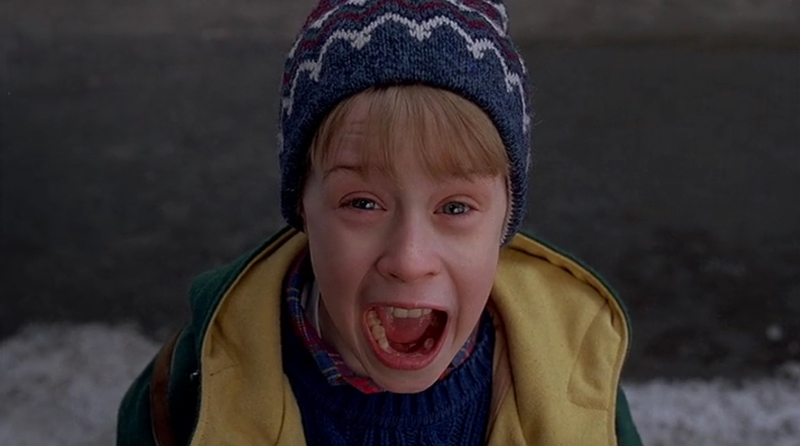 It’s around this point in proceedings that Home Alone 2 admits it has nothing new to offer returning audiences, so becomes less a sequel than a remake. Helping ease the situation, it’s undeniable that having New York as a backdrop gives the film a much larger canvas to paint on, and for that alone I can understand the small but vocal opinion that Home Alone 2′s the better of the two movies. When you think back to what Kevin actually did for the majority of the first film (order a pizza, bounce on the bed, read a naughty magazine), there’s simply more for Macaulay Culkin to be occupied with here—and I must admit the hotel hijinks alone greatly benefit the second act. 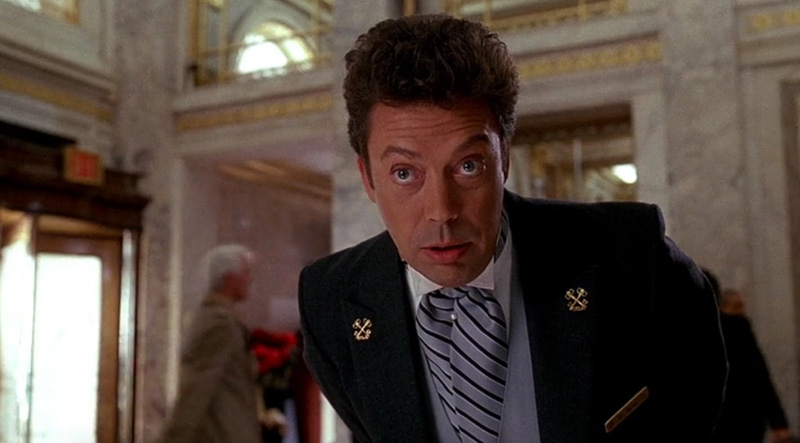 Things get stupid once Harry and Marv enter the story, fresh from escaping prison during a riot. It’s hard to swallow the unlikeliness of them every bumping into Kevin again, let alone in a completely different part of the country in a city with a population of 8 million, but their destinies seem entwined. This time, the Wet Bandits plan to rob a toy store of its money that’s going to a children’s charity for Christmas, but Kevin takes it upon himself to teach them another lesson—this time rigging an abandoned town house with booby-traps, to lead the hapless thieves through another half-hour of cartoonish violence.

Indeed, this is a far more cartoonish movie than the first. There’s actually a shot where Marv’s being electrocuted and Columbus throws in a shot of a skeleton wearing a fake beard and wig. And it’s not just the third act where the film feels like live-action animation, either. There’s match-cut to Tim Curry from The Grinch on television, seconds before his character has an idea and a light bulb literally turns on above his head. 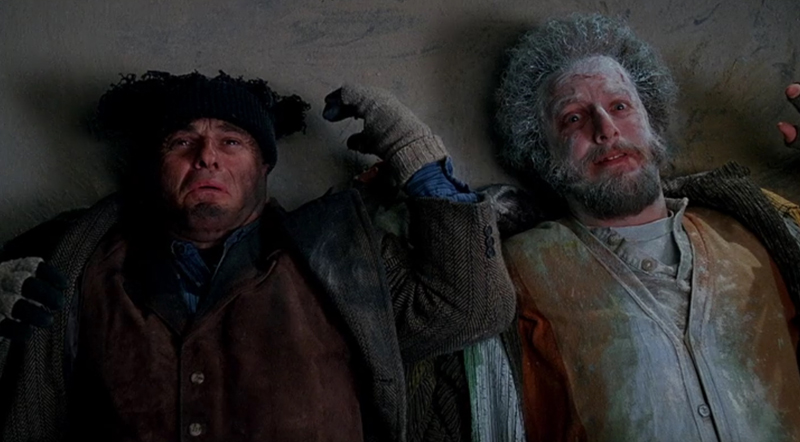 Like a lot of sequels, Home Alone 2 knows what its audiences responded to most last time, and is happy to deliver more of the same. The locations are fancier and more elaborate, the focus rarely leaves Kevin’s exploits (his parents don’t seem half as worried about his loss this time), and the ways in which Harry and Marv are assaulted are much nastier. Although only one sequence feels genuinely clever this time, when Harry and Marv think they’ve got the measure of Kevin’s reprise of the ‘swinging paint cans’ ploy (faking the sound of being hit when running up the stairs after him), but don’t count on the boy also flinging a huge metal post. The sound design of the two men being brutalised also ups its game, with bones and noses audibly cracking.

There are things I prefer about Home Alone 2, but ultimately the first film is where the story’s fresher and the concept glues together much better. The sequel is just a city-set retread—even going so far as to swap out the Old Man next-door with a Pigeon Lady (Brenda Fricker), who likewise gets some wise words from Kevin during a quiet scene. There’s nothing new here, but Home Alone 2 was nevertheless a big success—making $358m worldwide, from a surprisingly low budget of $20m. While that was way down on the original’s $476m haul, it can’t be sniffed at. I’m pretty sure 20th Century Fox would’ve done another ‘true sequel’ (everyone ignores those straight-to-video, Culkin-less stinkers), but thankfully common sense prevailed because—to paraphrase another sequel-rich franchise, ‘the same shit couldn’t happen to the same kid thrice’.