I find enthusiastic claims made by the creators of any film or television episode that it’s going to be scary rarely ring true, and my expectations often evaporate into disappointment. “Sleep No More” is, alas, just that—even though there’s a huge amount to admire about its intriguing ideas and ambitious story. However, the story doesn’t really begin until about 45-minutes into the running time, when everything you’ve just seen literally crumbles into dust before your very eyes.

Horror and science-fiction have always tapped into our most personal fears, but the real crux is how you can avoid repeating established aesthetic and thematic conventions. Writer Mark Gatiss stakes out the territory already relentlessly explored by showrunner Steven Moffat: his ‘corner of your eye’ fears and the uncanny notion of monsters possessing typewriters, telephones, television sets, and looming out of surveillance camera footage. The uncanny has been a repetitive obsession in the revived Doctor Who. Gatiss previously dipped his toe into this particular area with Maureen Lipman terrorising us from within TV broadcasts in 2006’s “The Idiot’s Lantern”. 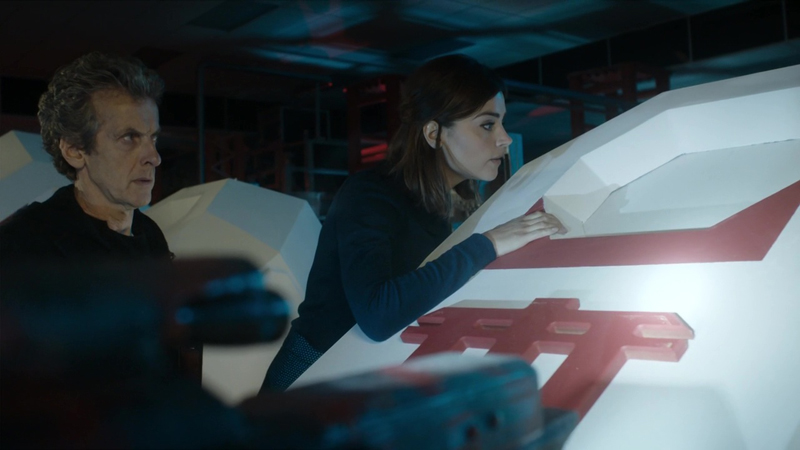 Gatiss returns to this theme in the fate that befalls the 38th-century Le Verrier science lab, in orbit around Neptune, but forsakes his comedic and Gothic horror inclinations for something altogether more contemporary with “Sleep No More” mapping the horrors of the postmodern technological realm and its ties with globalisation and innovation.

However, we’ve seen the episode’s aesthetic conceit before in the dozens of found footage horror films that have saturated the market since 1999’s The Blair Witch Project. In fact, the concept of constructing verisimilitude and a sense of documentary authenticity around horrifying events had already provided a boost to Orson Welles’ career with his landmark radio production of War of the Worlds in 1938. It has continued within the horror genre, specifically marked out in the post 9/11 era by Cloverfield (2008), Diary of the Dead (2007), [REC] (2007), Quarantine (2008) and Paranormal Activity (2007). 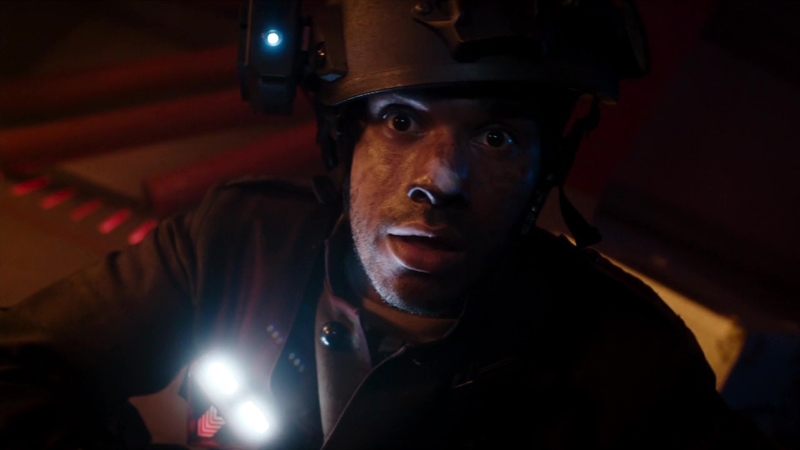 Today, audiences recognise the ubiquitous conventions of found footage horror: an aesthetic constructed with hand-held cameras, disruptions and exaggerations in sound and vision, simulated surveillance feeds, time-coded images, night vision, and low lighting. These invite us into a space where the boundaries between fact and fiction are blurred, where we feel present within actual events. It’s also reinforced by the television ‘mockumentary’ genre, equally adept at playing with the appearance of reality and with a tradition that stretches back as far as The War Game (1965) and 1977’s Alternative 3 that now underpins the reality TV genre.

“Sleep No More” plays on these conventions and in itself becomes a media artifact; a last broadcast put together by a rogue scientist to fool you into thinking that if these events were to occur this is what they might look like. Only at the end does the whole idea of found footage about monsters made from dust register as his manipulation of his subjects’ inner fears as they slumber inside Morpheus, his instant sleep machine. 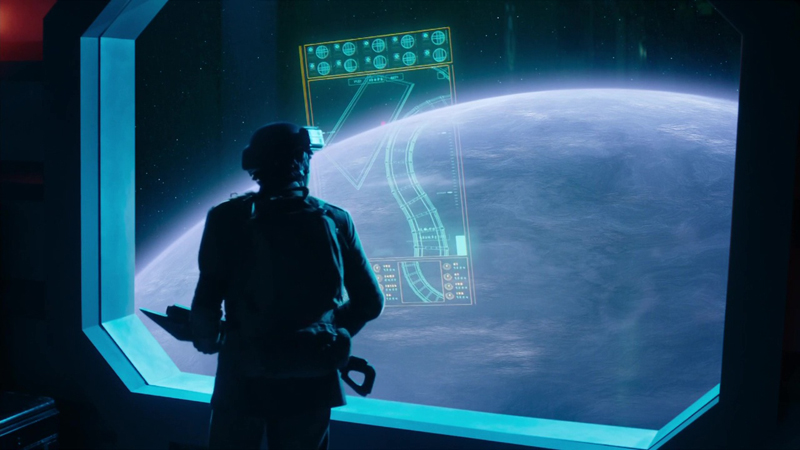 Like The Blair Witch Project, which only opened with a title card, this episode has no opening titles, reinforcing a sense of authenticity by removing the recognisable structures of opening titles and title music. Personally, I thought keeping the traditional ‘Next Time’ trailer and end credits was a mistake as they dissipated the effect of a rogue broadcast. Clearly, contractual obligations must ensure everyone gets their due credit, but aesthetically it fails to match the opening on-screen text that subtly highlights the title of the programme.

“You must not watch this,” teases Gagan Rassmussen (an effective Reece Shearsmith who steals the episode) directly into camera, meaning of course that you’re invited the do exactly the opposite. This sets up the narrative involving the rescue team arriving on Le Verrier to investigate its long silence. Featuring officers Chopra (Neet Mohan), Nagata (Elaine Tan), Deep-Ando (Paul Courtenay Hyu) and cloned ‘grunt’ 474 (a criminally under-used Bethany Black), this introduction establishes 474’s crush on Chopra but beyond this there is little character development. They are slasher film fodder; the interchangeable victims of whatever horror is about to unfold and, apart from Chopra and 474, I had no empathy for them. 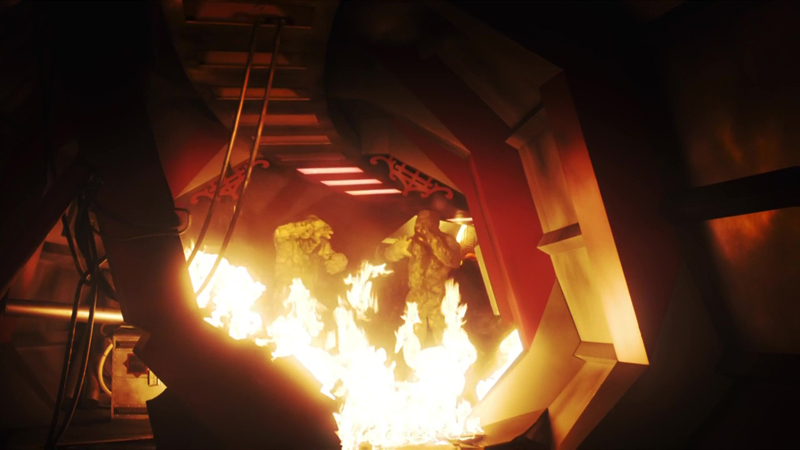 Buried in this setup is the intriguing idea this is a society where work, rest and play have been absorbed by capitalism; the human subject’s need for sleep colonised and harnessed to a massive engine of profitability, the Morpheus device. Only by the end of the story are the “terms and conditions” of surrendering yourself to the arms of Morpheus and “leaving the Rip Van Winkles behind” made horrifyingly clear.

Into this maelstrom of subjective camera and doctored feeds, emergency red lighting, and piercing torch light, The Doctor (Peter Capaldi) and Clara (Jenna Coleman) arrive to “assess the stress”. Again, the aesthetics of found footage horror collide with a vision of dystopia in space seen in everything from Alien (1979) to Prometheus (2012). Director Justin Molotnikov skilfully marshals these qualities, generating a sense of claustrophobia by plunging most of the action into shadow and using juxtaposing surveillance viewpoints with circling subjective camera to make this a distinctive enough episode of Doctor Who. The problem is it’s often too confusing to register what exactly is happening to the characters during various attacks. 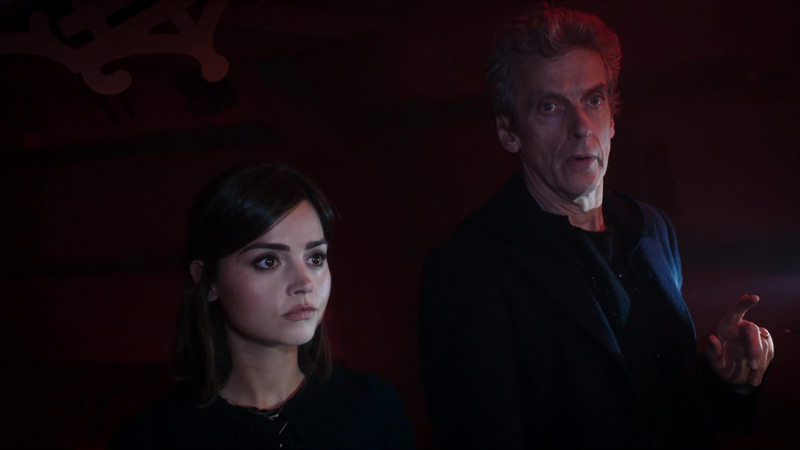 What emerges is a very abstract, impressionistic vision; an off-kilter, disorientating experience that regularly breaks the fourth wall with characters addressing the audience, either in voice over or direct to camera. The Doctor’s haunting speech about sleep keeping us “safe from the monsters inside” is particularly effective. Characters and audience are wrapped together, sharing the reality of this episode as it progresses.

I discussed last week how the series had moved to explorations of ‘inner space’, physically and psychologically, by confining small groups of characters to a minimum number of sets. “Sleep No More” is a further iteration of how clever production design, lighting and minimal visual effects respond to constraints of budget. Gatiss also defers ambitious effects, legions of monsters and location filming to concentrate on the interesting premise but tends to abandon his characters. I also wanted to see more of the Indo-Japanese influenced design of the station as there’s barely enough here to establish the 38th-century milieu. 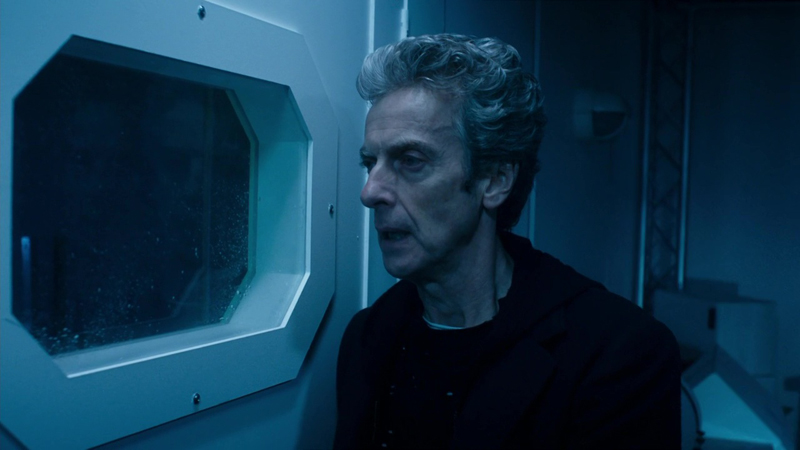 Talking of monsters, The Sandmen are well realised and, as a sentient agglomeration of mucus, oil, skin cells and other debris, are a creepy extension of body horror and underline the idea of monsters lurking within while we grab forty winks. They also benefit from the lullaby counterpoint of Pat Ballard’s song “Mr. Sandman“, acknowledging the figure from European folklore who dropped the sleep into children’s eyes to initiate pleasant dreams.

E.T.A. Hoffman turned this into a nightmarish tale where the Sandman would throw dust in children’s eyes, their eyes would fall out and he would feed them to his own children. We are also only a step away from Morpheus, the Greek God of dreams, mentioned by Clara. It’s interesting that Clara is dragged into one of the Morpheus machines, induced into sleeping (perhaps even dreaming the entire series?), and that Rassmussen hides in one of the pods, planning his scheme from within as a form of insidious dream. 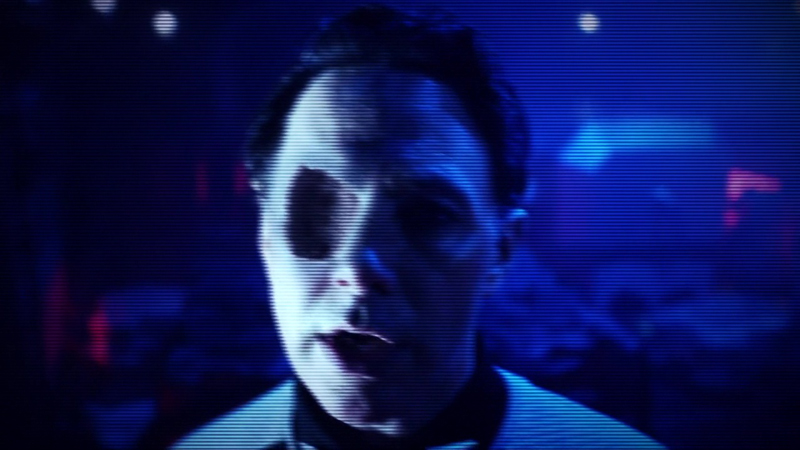 The Doctor works out that all of this has a connection to the Morpheus pods. Each of the crew, apart from Chopra but including Clara, have been in the pods. He concludes that all the viewpoints the characters and the audience are seeing are being gathered together by Gagan Rassmussen as a statement for the authorities when they pick him up in a rescue ship after he has disposed of them all. He’s the company Sandman trying to smuggle the deadly monster back to civilisation.

Rassmussen’s confession plays out as found footage, disrupted by spikes in the video feed, and all the monsters and the running up and down corridors no longer make any sense. When the TARDIS departs and the lab self-destructs it’s a false ending and Rassmussen appears again on screen to dismiss everything we have just seen. Echoing E.T.A. Hoffman, he plucks out his eye as he crumbles to dust and utters his chilling curse.

The only constant is the Morpheus machine’s ability to plug into the brain and “Sleep No More” is nothing but a viral recording; a comment on the nature of Doctor Who’s own “death defying scrapes, monsters and a proper climax with a really big one at the end!”, to spread the infection gathering in the corner of your eye as you snooze. This is horror reconfigured around our interactions with technology, and how it exposes our private selves and inner fears. It’s just a shame that in its bold execution it’s missing that vital element: it isn’t particularly scary.