We return to The Americans in the middle of a nightmare, as Philip (Matthew Rhys) dreams about the time, as a child, he beat a bully to death with a rock. When he wakes up, Elizabeth (Keri Russell) asks what’s wrong, and he tells her that he has to let Martha (Alison Wright) know about Gene—the FBI computer technician he murdered and framed for the bug in Martha’s office in last season’s finale—before she finds out at work. He does, but that he’s using a truth to hide what’s really bothering him—and that, by the end of the episode, he’s opened up about his memory to the wife that only recently discovered he’s pretending to be someone else, instead of the one who’s always known that he isn’t who he says he is—is one of those perverse twists on the notion of intimacy that The Americans does so well. The show was originally sold to audiences as an espionage thriller set in the waning days of the Cold War, and it is that, but for all of its plotlines involving missile defense systems, double agents and, now, chemical weapons, at its heart, it’s fundamentally a show about marriage, relationships, and whether you can ever really know the person sleeping next to you (or anyone else).

Martha is much of the focus of this episode, and at this point, she’s perhaps the saddest character in a show that’s filled with characters that aren’t exactly chipper. She married “Clark” back in season one, even though he was frequently out of town and wasn’t really living with her or sharing anything like a normal day-to-day life—from the start, it was impossible to not feel for this sweet, needy woman who was glad to accept whatever companionship she could get and was always bound for heartbreak (or worse). Wright is excellent in this episode, as Martha’s emotional reaction when she finds out Gene was killed to keep her safe is complicated—she’s horrified and sad, of course, but there’s also a sense that she’s moved by how far “Clark” (who no longer bothers with the wig and glasses) is willing to go to keep her safe. By episode’s end, Martha is willing to keep helping “Clark” with his mission, and as so much of the show’s first three seasons hanging on the suspense of what would happen when those most (unwittingly) involved in Philip and Elizabeth’s mission would respond when they inevitably found out, I’m simultaneously excited and apprehensive now that the cat’s out of the bag. 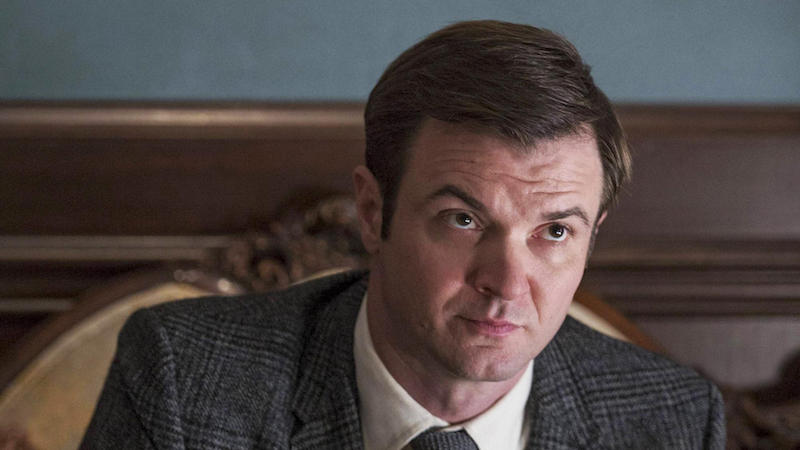 That’s especially true of Paige (Holly Taylor), who confessed her parents’ secret to Pastor Tim (Kelly AuCoin) in last season’s cliffhanger. In their meeting in this episode, Pastor Tim asks her to gather more details about her parents, presumably so he can determine if Paige is right and, if Philip and Elizabeth have harmed anyone, whether he’s justified in sharing Paige’s confession with the authorities. While Tim’s office is bugged, it would seem that Philip and Elizabeth are listening to the wrong tapes, or that they haven’t gotten to this one yet (this point confused me a bit, if anyone would like to clarify in the comments). I’ve read speculation about whether Pastor Tim is a CIA agent or another KGB mole, and that’s obviously not out of the realm of possibility in a show about spies, but I’d guess he is who we think he is (and that he’s not going to be around for much longer). I doubt that Tim is the one that will bring the show’s house of cards down; he’s more of a way to allow Paige to articulate a conflict that is otherwise totally internal. We see her act boldly earlier in the episode, when she directly asks Elizabeth where her father is and gets a straight answer. But there’s also the brief but touching scene where Paige stands outside her classroom while her friends recite the Pledge of Allegiance, not knowing whether she still belongs; it’s a bit on the nose, perhaps, but it works.

Much of this episode was devoted to re-establishing whether the characters exist in relation to each other after the many plot upheavals towards the end of last season. In addition to Paige and Martha, we check in with Tatiana and Nina (who has a husband!), as well as Gabriel, who introduces the prospect of chemical warfare. The great Dylan Baker joins the cast as a mysterious operative who provides Phillip and Elizabeth with a vial of “Glanders”, which, he tells them “is to meningitis what bubonic plague is to a runny nose.” As with other potential catastrophes that Phillip and Elizabeth have been involved in, that we know it never happened (and how the big picture story ends) adds a weird sort of pathos to the plotline—it’s no less tense, particularly when a jealous Stan (Noah Emmerich) almost breaks the vial in Philip’s pocket, but that Phllip and Elizabeth have devoted their lives to a cause that is on the verge of extinction casts a sense of futility over every character that dies in the name of their cause.

I’ll admit that having Elizabeth relegated to a peripheral role for most of the episode had me anxious to get back to her and Philip; while “Glanders”—which was co-written by series creator Joe Weisberg and Joe Fields, and directed by Thomas Schlamme – does a fine job of reintroducing us to the Jennings family, the show is at its most electric when it’s about the strange partnership between the two main characters. At the same time, it hardly seems an accident that Elizabeth isn’t the focus; the show has always been great at taking its time and building towards well-earned payoffs, and with Philip growing less committed to the cause than Elizabeth (and Paige’s allegiances still uncertain), it already feels like the season is building to a major turning point. As much as I’m dreading what that might be—there aren’t a lot of happy endings on The Americans—I’m glad it’s back.