The TARDIS feeling grumpy about temporal anomalies, and the tolling of the Cloister Bell, do not prepare you for the mind-scrambling deconstruction of the ‘bootstrap paradox’ The Doctor (Peter Capaldi) serves up in the pre-titles of “Before the Flood”. Rather than info-dump the nature of recursive time loops (a staple of SF literature, with said paradox named after a 1941 Robert A. Heinlein story) in the middle of the action, the episode breaks the fourth wall with a cosy chat about Beethoven.

This generated a sense of déjà vu after I watched 1978’s The Invasion of Time last week, which features another fourth wall moment as Tom Baker turns to camera in episode two and declares to 11 million viewers “even the sonic screwdriver won’t get me out of this one.” Of course, Hartnell got there first with his 1965 Christmas greeting to us in “The Feast of Steven” episode of The Daleks’ Master Plan. 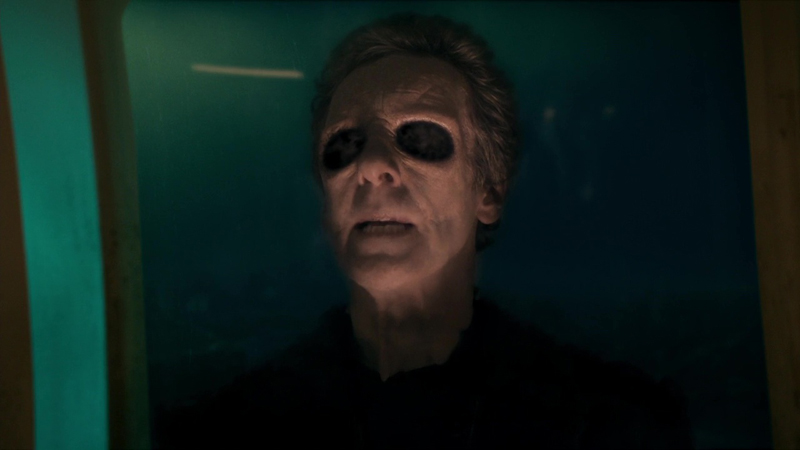 Mind you, Hartnell didn’t strap on a guitar and thrash out a medley of Ludwig Van’s Fifth Symphony and the Doctor Who theme. The existing theremin-based, rather weedy pots n’ pans version got a well-deserved kick up the backside, but I find The Doctor as aged rock star is rather like watching Keith Richards pilot the TARDIS.

The opening Beethoven conundrum is a preamble to the events of “Before the Flood” and adroitly explains the theoretical physics of closed timeline curves. Essentially, all you need to know is The Doctor goes back to 1980 and reverse-engineers the narrative. Everything we saw in “Under the Lake” was caused by The Doctor slipping back into history to set everything up. We’re just left to ponder when exactly on the timeline curve he had the initial inspiration to do so.

Along the way, the story recycles the similar themes of Paul Cornell’s “Father’s Day” and Steven Moffat’s “The Big Bang”: The Doctor, Bennett (Arsher Ali) and O’Donnell (Morven Christie) observe themselves meeting the Tivolian undertaker Prentis (Paul Kaye), thirty-minutes prior to the event and, rather like how The Pandorica saved Amy, The Doctor uses the Fisher King’s statis chamber to escape the climactic flood and emerge back in The Drum in 2119. 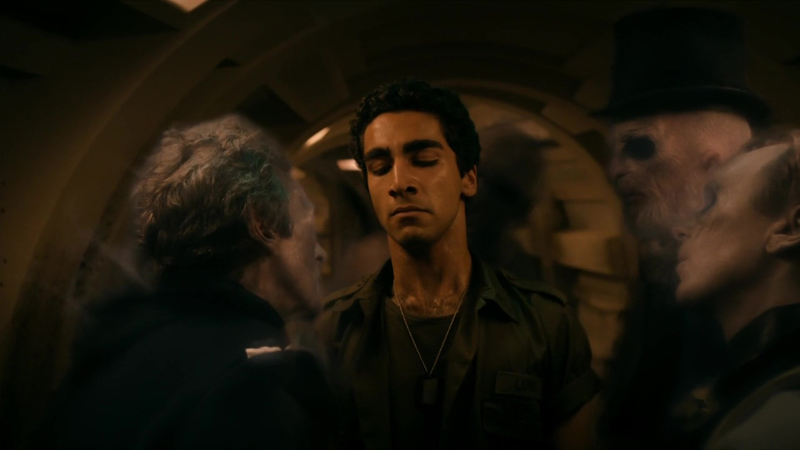 Perhaps the idea is a little bit too clever for its own good, as there’s often a tendency to suck any joy out of the story when the paradox indicates the jeopardy is already resolved by the time The Doctor pops out of the stasis chamber rather than monster-of-the-week the Fisher King. However, the Fisher King is probably the episode’s biggest downside.

This deceased conqueror is named after the Arthurian and Holy Grail legends; a figure of supernatural power and an emblem of the life force. Analogous to the gospel’s ‘fisher of men’ motif, the alien creature uses its power to draw in disciples with a message that re-wires the synapses of anyone who reads it. It has everything going for it as a Doctor Who monster and the glimpses we get of it in the abandoned church, beautifully back lit, are well realised.

However, the combined physical and vocal talents of Peter Serafinowicz (who undertook similar vocal duties for Star Wars‘ Darth Maul), seven-foot tall ex-basketball player Neil Fingleton, and Slipknot’s Corey Taylor do not, alas, save the Fisher King from a common problem in Doctor Who. Despite an interesting creature design, it’s painfully clear this is a man in a not particularly mobile rubber suit. Director Daniel O’Hara tries to obscure it with shadows, but his good work comes undone in close ups and, later, as the creature is lured out of the church into unforgiving daylight. 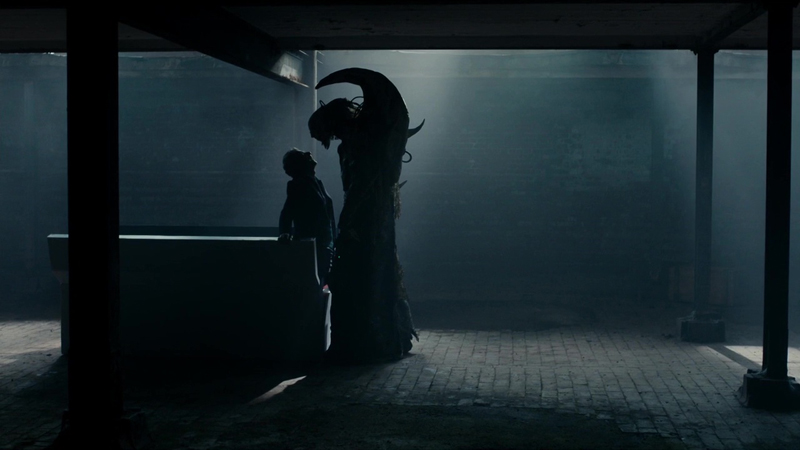 Conundrums and creature costumes aside, there are more intriguing matters to attend to here. After O’Donnell arrives with The Doctor and Bennett in 1980, she notes that this is “pre-Harold Saxon. Pre-the Minister of War. Pre-the moon exploding and a big bat coming out.” The Doctor questions her about the Minster of War but, realising this may be of future origin, intriguingly concludes: “I expect I’ll find out soon enough.”

This seems appropriate when the Scottish village they find themselves in is an abandoned Cold War training ground; similar to the MoD facilities on Salisbury Plain (such as Imber Village), where the supposedly dead alien warlord is to be buried. It’s a surreal setting, redolent of ideological battles long since over, its remnants offering a military memento mori for the occupants of The Drum, the conquered Tivoli, and the fallen Fisher King.

O’Donnell excitedly jumps up and down after her trip in the TARDIS, and gleefully marvels at its dimensional transcendentalism. It’s a transitory joy, but her fate is sealed. When she splits up from The Doctor and Bennett, the Fisher King claims her. Her needless death reminds us of the Twelfth Doctor’s callousness. Bennett angrily accuses the Doctor of using her death to test a theory about the ghosts and observes that only now, with Clara (Jenna Coleman) next on the list of victims, will he make the effort to save anyone. 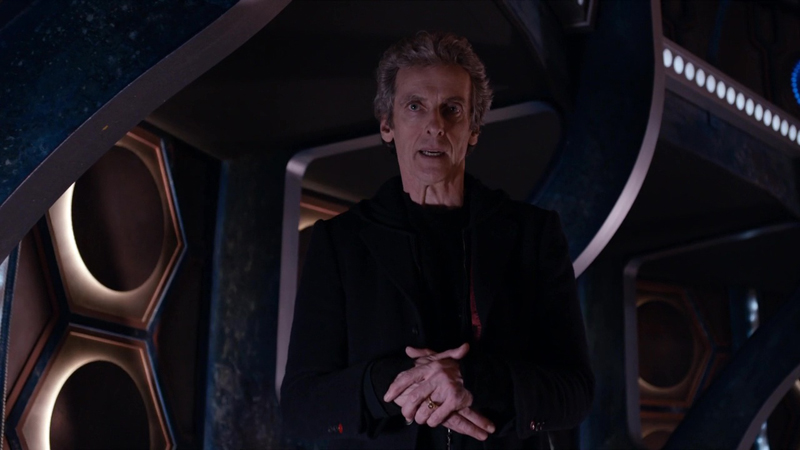 It’s also a reflection of how Clara has normalised her own travels in the TARDIS by gradually taking on The Doctor’s qualities by osmosis. Her phone conversation with The Doctor about the inevitability of death underlines how he is essential to her, and provides her with a reason to carry on after the demise of Danny Pink. Testing their friendship, she is brutally honest with her demand he comes back and saves her: “I don’t care about your rules or bloody survivor’s guilt. If you love me in any way, you’ll come back.” Perhaps, bearing Clara’s imminent departure from the series in mind, he may not be able to fulfil that request in the near future.

The implications of this resonate in the scene where Clara figures out that Lunn (Zaqi Ismail) is the only one who’s not been programmed to see the message left by the Fisher King in the spaceship, so will not be harmed by the ghosts. When Clara asks him to retrieve the phone taken by O’Donnell’s ghost, Cass (Sophie Stone) suggests Clara’s travels in the TARDIS have changed her to such a degree she is “always happy to put other people’s lives at risk.” 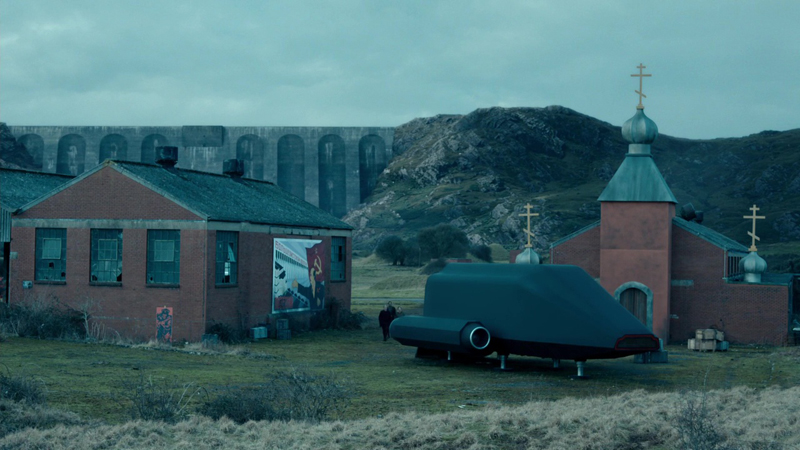 Naturally, there are rules to this time-travelling business and even the TARDIS prevents The Doctor from returning to The Drum to rescue Clara. Arriving half an hour in the past does not allow him to save Prentis and O’Donnell and, as with Rose in “Father’s Day”, he reminds Bennett that “you can’t just go back and cut off tragedy at the root.” However, a few lies can lure an alien out into the open, blow up a dam, and create a ghost-Doctor to save the future.

In perhaps the episode’s best sequence, when Bennett is trapped by the ghosts after he finds the phone and Cass and Clara set out to rescue him, Cass is haunted by the axe-wielding Moran (Colin MacFarlane). Daniel O’Hara astutely and effectively cuts between the grating noise of the axe as it is dragged along the floor behind her, and to her own sense deprived world of silence. Compensation is found through her other senses and her hand feels the vibrations through the floor and alerts her to her murderous pursuer.

Ending on a bittersweet note, where Bennett mourns the loss of O’Donnell, takes Clara’s advice that life does go on and impresses it on Cass and Lunn, “Before the Flood” is a clever time paradox episode that questions our ideologies about war, fate, life, and death. Despite all the brilliant efforts of director Daniel O’Hara and his director of photography Richard Stoddard to give this episode a distinctive look and feel, it’s hampered by a monster that isn’t terrifying enough when we eventually see it. There’s also the use of the glasses as a sonic screwdriver proxy, providing a handy way of creating the ghost-Doctor to lure the others into the Faraday cage and deprogram the surviving humans. I now long for a scene where Peter Capaldi turns to camera and admits “even the sonic sunglasses won’t get me out of this one.”