“As you come into this world, something else is also born. You begin your life, and it begins a journey towards you. It moves slowly but it never stops. Wherever you go, whatever path you take, it will follow,” intones The Doctor (Peter Capaldi) over a slow montage of endless corridors swept by the passage of the sun, the churning of cogs, and the dissolving of flesh. Like Dante’s narrator, who “woke to find myself in some dark woods” in The Divine Comedy, The Doctor addresses the viewer directly, as he too takes the path from despair to enlightened awareness in Steven Moffat’s “Heaven Sent”.

Operating as a recurring flashback, the episode sees The Doctor as both narrator and protagonist, for a tale unfolding like a Groundhog Day recollection and expansion of the opening montage—and, most importantly, that shot of the dissolving hand followed by The Doctor’s arrival in the teleport chamber. The end is the beginning in this intricately plotted and beautifully directed puzzle box of an episode. 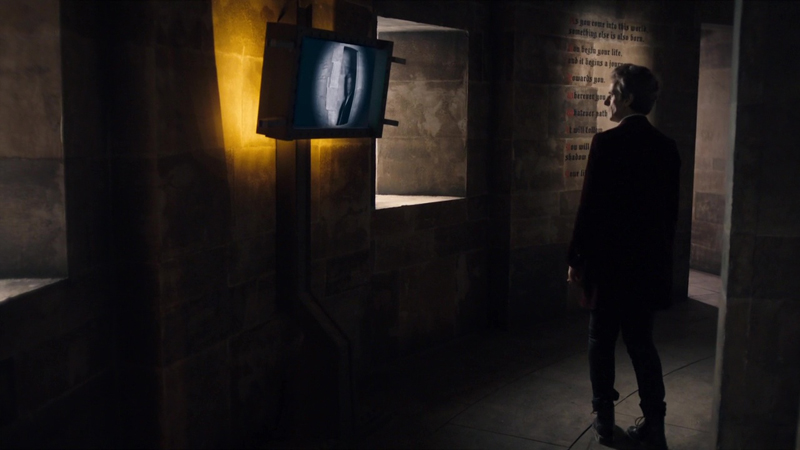 In the Gothic space of an isolated castle, The Doctor is stalked by a fly-blown, shrouded spectre after arriving via teleport. He observes the spectre’s viewpoint on a series of screens around the empty corridors and, in another of Moffat’s uses of technology as a receptacle of the uncanny, witnesses his own haunting on television; alerted to the approach of the creature, measuring out each encounter. It’s almost like having eyes in the back of your head.

In the agglomeration of graveyard, stone vaults, corridors and cellars, Moffat returns to his abiding Gothic fairy tale motifs. The castle is a Kafka-esque realm where The Doctor faces self-doubt and self-judgement—perhaps manifested in the shrouded creature which constantly shadows him, as he attempts to retrieve the facts, understand the logic of his incarceration, and assuage his grief over Clara’s (Jenna Coleman) death. 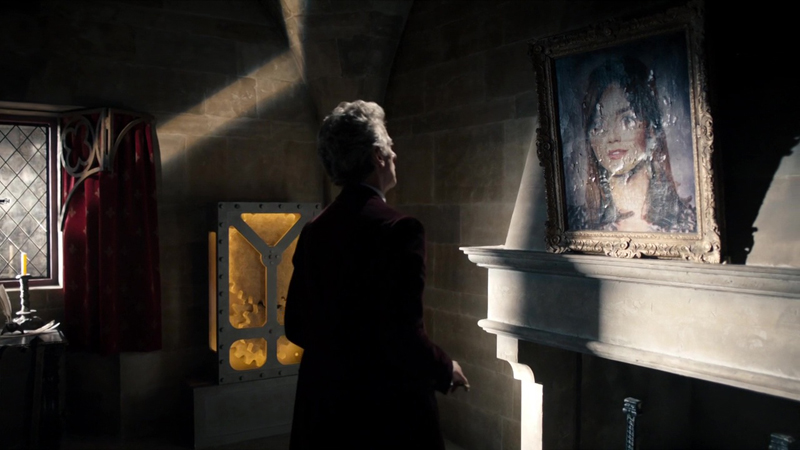 The purpose of this trap is to extract from The Doctor the truth of his confession, and at the same time frighten him into submission with a decomposing figure of death and corruption from childhood nightmares. He eventually realises that a drip feed of revelations temporarily stops the creature in its tracks and reconfigures the architectural space of the castle he’s trapped in.

“Heaven Sent” is fairly unique in that it features only The Doctor. The dreamlike imagery conjured up by director Rachel Talalay initially reminded me of The Doctor’s surreal descent into ‘hell’ as he fought corrupted Time Lords in the Matrix during “The Deadly Assassin” and “The Ultimate Foe”. There is also the recursive occlusion of the Escher inspired “Castrovalva” to consider as a forerunner to The Doctor’s ceaseless return to the same corridors and rooms of the empty castle. His modernist take on architectural space is full of the uncanny shifts and hidden meanings tracked by this episode. 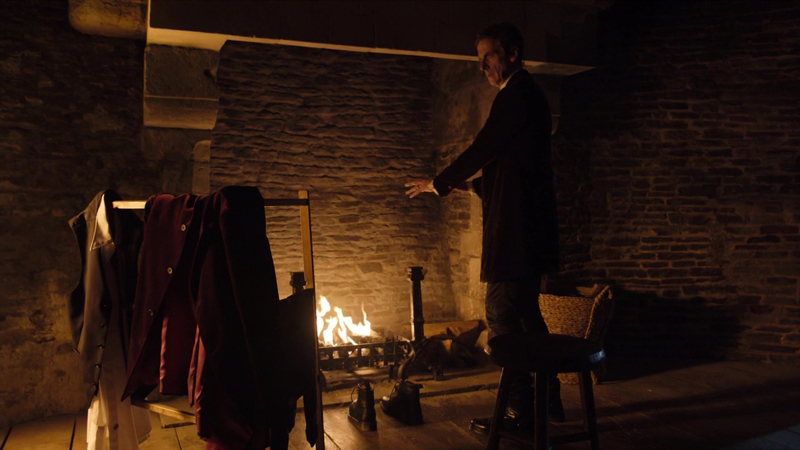 Moffat also transposes Sherlock’s concept of the ‘memory palace’ onto The Doctor’s regression into the ‘TARDIS of his mind’ and the conversations with dead companion Clara Oswald. Thomas Harris’s Hannibal Lecter also employed the same technique, and as a device it dates back to Cicero’s rhetorical treatises. It’s used in two ways here; for The Doctor to deal with his grief at the loss of Clara and reconnect with her as his conscience and as a way of organising and deciphering his uncanny environment.

It’s highlighted wonderfully by the very Sherlockian deductions he makes about atmosphere, gravity, and distance by using a flower, an eyeglass, and throwing a stool through one of the castle windows in order to ascertain the drop from the window and the nature of his landing. “If they’re going to threaten you with death, show them who’s boss. Die faster!” he explains during the “storm room” conversations he has with Clara in the TARDIS. There’s also a delightful breaking of the fourth wall as he explains his survival and acknowledges the viewer with a look to camera: “I’m nothing without an audience.” 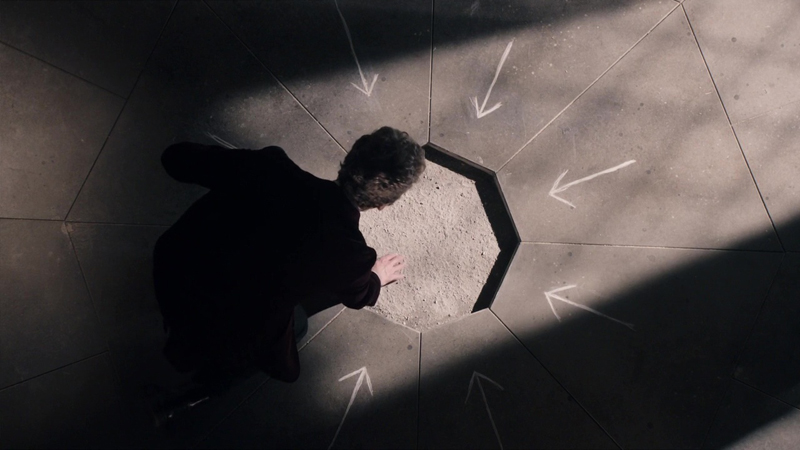 He is aided by the presence of Clara who, in a reference to The Doctor’s earlier reflection on memory in last year’s “Listen”, scrawls her observations down on a chalkboard. From the cracked portrait (“very, very old”) to the chalkboard messages, she oversees The Doctor’s journey out of grief and into survival. As Clara’s questions appear, he acknowledges his frailty: “Can’t I just sleep? Do I have to know everything?” He almost confesses (there’s that word again) that he can’t always win.

The Doctor warns us at the start of the episode he “will never, ever stop” to find his nemesis. By the last ten minutes of the story, Talalay vividly show his tenacity in a forceful montage that builds on Moffat’s use of looped narratives as The Doctor constantly renews himself in order to erode away the spatial authenticity of his prison cell. Through his mind’s ability to divide and arrange space and use visual associations, such as the word ‘bird’ written in the dust to remind him of the tale of The Shepherd Boy, The Doctor gradually understands the nature of his task. 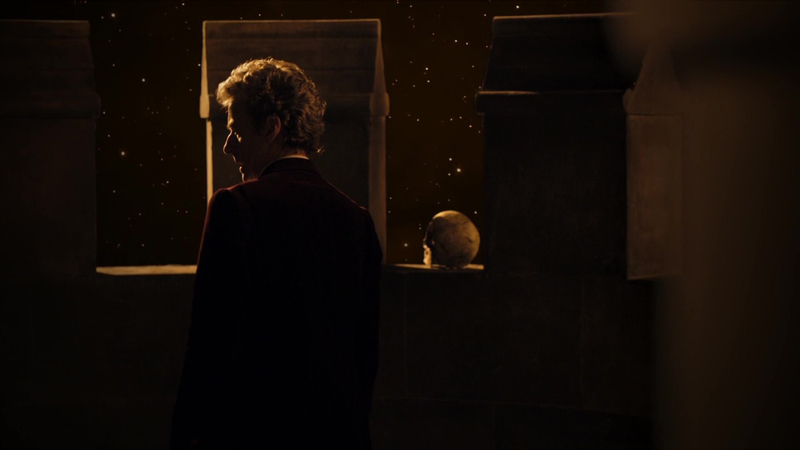 It’s entirely apt that Moffat turns to the Brothers Grimm to underline the message The Doctor leaves himself. The Shepherd Boy is a rumination on “how many seconds of time are there in eternity” and, with its little bird that gradually erodes away a mountain made of diamond over thousands of years, our perception of a process moving so slowly that we can barely begin to consider the gigantic span of time it occupies.

The cycle of life and death and the wheel of time feature prominently throughout as a symbol: the revolving sections of the castle, the spinning cogs, the layout of the garden, as well as the cyclical nature of the narrative revealed when The Doctor emerges from the sea and finds his wet clothes already drying by the fireside. There’s a sense that this is tapping into the stories of Jorges Luis Borges too, where his metafictions twist and fuse the fantastic and mythical with meditations on reality and eternity. 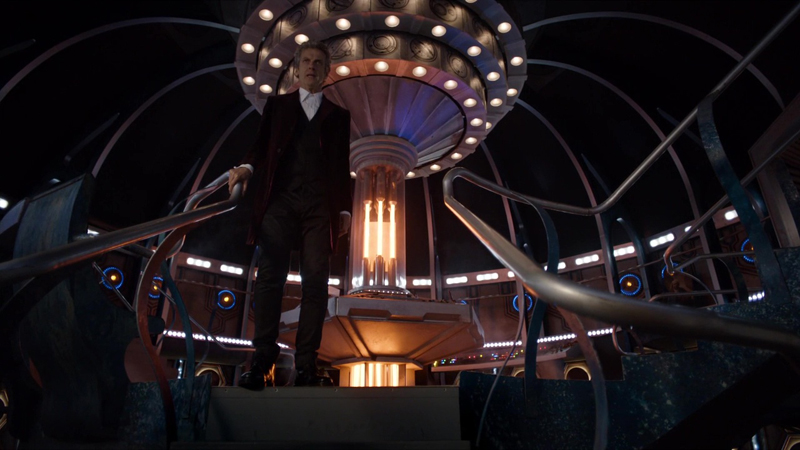 The temporal riddle of “The Garden of Forking Paths“, which mixes horticultural design with a textual labyrinth, mirrors The Doctor’s attitude to gardening and his digging for clues. “The Library of Babel” is an allegory about a library as a universe; an infinite labyrinth constructed from a series of hexagonal galleries where a traveller will find “after untold centuries that the same volumes are repeated in the same disorder—which repeated, becomes order: the Order”. The latter is particularly resonant as it’s theme of order from repetition parallels the narrative loops of “Heaven Sent”.

“Heaven Sent” turns into a philosophical detective story about eternal life, grief, sacrifice, survival, and confession. As The Doctor reflects on Clara’s loss—”It’s funny, the day you lose someone isn’t the worst. At least you’ve got something to do. It’s all the days they stay dead”—he’s also considering the pain of eternity and, as a prisoner, how to fill his days with a plan to escape, to find release from pain and sorrow, and win the freedom to track down his jailer. 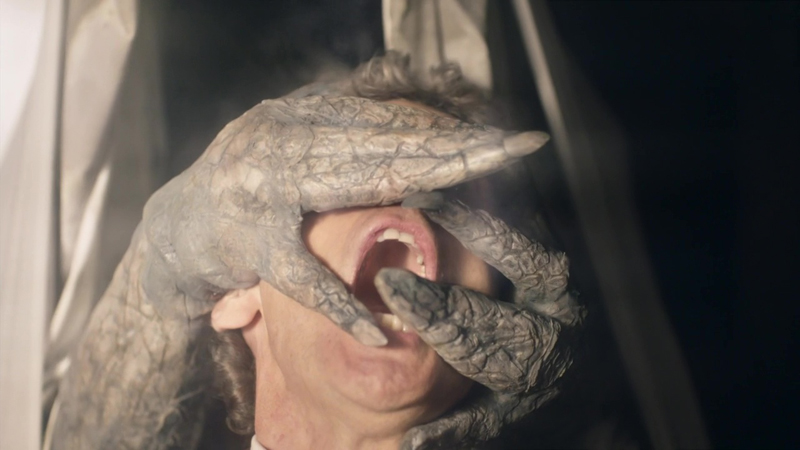 ‘Confession’ is the key word uttered 25-minutes into the episode. At this point I was thinking “confession dial” because, of course, that’s what all of this is connected with. It becomes clear that “truths I’ve never told before” are probably on The Doctor’s confession dial, last seen in the hands of Mayor Me/Ashildr. By the time he’s found his way to room 12 and punched that harder-than-diamond Azbantium wall for two billion years, all we know is he’s terrified of dying, he didn’t leave Gallifrey because he was bored (he ran away because he was scared), and the Hybrid is real and he knows what it is.

Talalay handles this material with immense skill, capturing The Doctor’s aching loneliness and frustration in those amazing wide shots of the empty TARDIS, and she builds the mounting tension with prowling cameras and quick-fire jump cuts to the shrouded creature leaping out at The Doctor. At the heart of it is a truly mesmerising performance from Capaldi, holding our attention solidly for 50-minutes. Although the frantically edited reveal that The Doctor is constantly burning himself up to recreate himself, repeatedly arriving at room 12 to hack away at the wall, just like the little bird polishing its beak on the diamond mountain, is perhaps maintained a tiny bit too long. 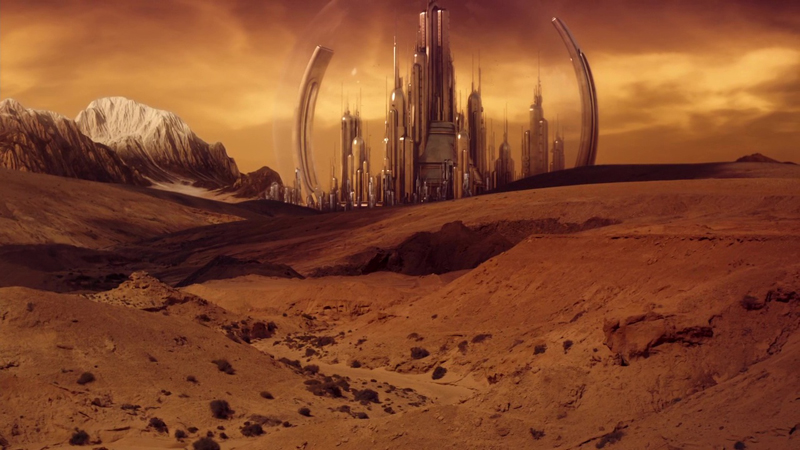 However, this remains an astonishing piece of television. The chilling realisation that all the skulls on the sea bed at the foot of the castle are in fact The Doctor’s is revealed in beautifully poetic imagery. The philosophical perspective on his eternal struggle is encapsulated in the superb dissolve from Capaldi’s face into a close up of the skull and in the tender scene with Clara’s hand on his face and her rejoinder to “get up off your arse and win!” The assured visuals are further enhanced by composer Murray Gold rising to the occasion with a powerful score mixing classical influences and acoustic guitar with some old school Radiophonic Workshop electronica.

Through sheer determination and constant pain, punching away at that diamond over billions of years, The Doctor undergoes a moral rebirth, rather like Dante’s narrator travelling through Hell, Purgatory and Heaven in The Divine Comedy. He emerges from the confession dial as a conflicted Time Lord aware of his weaknesses, who has now discovered Gallifrey the long way round just as he suggested back in “The Day of the Doctor”. Is he about to leave The Doctor behind and become the warrior again?

And who is the Hybrid destined to conquer Gallifrey? “It’s me,” claims The Doctor. Is Moffat pushing our buttons about the long contested idea of the Doctor’s half-human origins? Yes, I think so because she’s been in plain sight all this time and the Hybrid is Me.