A lot happened in the third season finale of Better Call Saul, although many of the big events didn’t get complete pay-off here, as many subplots were left dangling for later. It’s getting a little comical how the show is dragging things out, to some extent, but it’s so well-written and performed that I can’t deny it’s always a pleasurable slow-burn. And that’s not a very bad taste reference to how “Lantern” ended…

The weakest part of the finale was the situation with Kim (Rhea Seehorn), who’s been the character least served by season 3. With the introduction of Gus (Giancarlo Esposito) and added screen time for Nacho (Michael Mando), some room normally reserves for Kim and her storyline was sacrificed. She’s a good colleague/love-interest/friend for Jimmy (Bob Odenkirk), but because Jimmy’s situation with Chuck (Michael McKean) dominates that character’s arc somewhat, Kim often feels like a handy support when Jimmy needs a sounding board.

I can’t even remember much of anything Kim was involved with this year, so having a chunk of the finale revolve around her recovering from last week’s car accident felt… like a last gasp attempt to do something, anything, to suggest better things are to come with her. And having now broken her arm, which has forced her to stop and smell the roses (and get down to Blockbuster video), it seems likely that her sabbatical from practicing law’s going to benefit Jimmy. I just don’t know how long she’s going to be away from work, if Mesa Verde need her services and she’s a one-woman operation. By the end of “Lantern”, Kim’s moved out of her offices with Jimmy, to cut costs at home, and this seems like a big backwards step to me. Indeed, was there really any point to Jimmy/Kim moving into this office space for this season? Not a lot ever seemed to happen there, beyond Jimmy painting the wall. 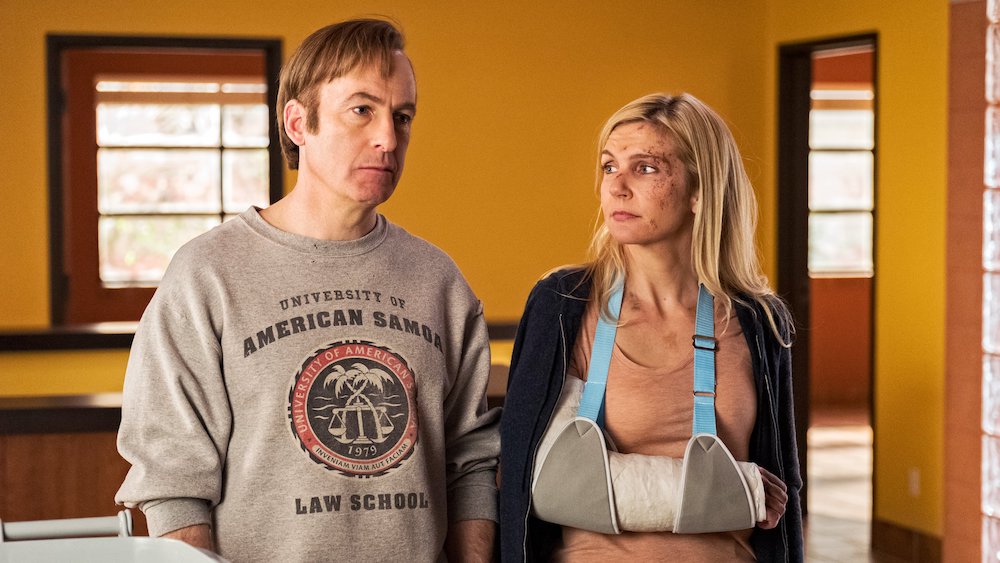 A little underwhelming was the storyline with Hector Salamanca (Mark Margolis), which didn’t offer any real surprises or subversions. I enjoyed the scene where Hector arrived at the shop owned by Nacho’s father, who’s quietly angry he’s been forced into this situation by his own flesh-and-blood, but the moment when Hector collapsed after being told by Bolsa (Javier Grajeda) that Don Eladio wants the drug smuggling to go through Gus Fring’s trucks permanently, wasn’t so great. It followed exactly the path I expected it to, despite a few moments when I thought the story was going to do something unexpected — with Nacho deciding to shoot his boss dead instead, rather than wait for his pill-swap plan to work. But then, that would have meant the business with the pills was a big waste of time. So the writers stuck to the obvious outcome, which was fair, but disappointing.

The only moment that felt surprising to me was seeing Gus come to Hector’s rescue, giving him CPR until an ambulance arrives, which probably saved his enemy’s life. We know, of course, that Gus just wants to keep Hector alive so he can be put through a ‘fate worse than death’, by his own hand, but nevertheless it made me raise an eyebrow. I wonder if Hector will perhaps reconsider his opinion of Gus (at least temporarily) next season, in light of what happened here? I guess it’s possible, if extremely unlikely because of Hector’s temperament and ability to hold a grudge. It looked like Gus noticed Nando’s switching back the pills, though, so maybe Nando’s going to be playing double-agent for whatever the Chicken Man has planned for Hector now? 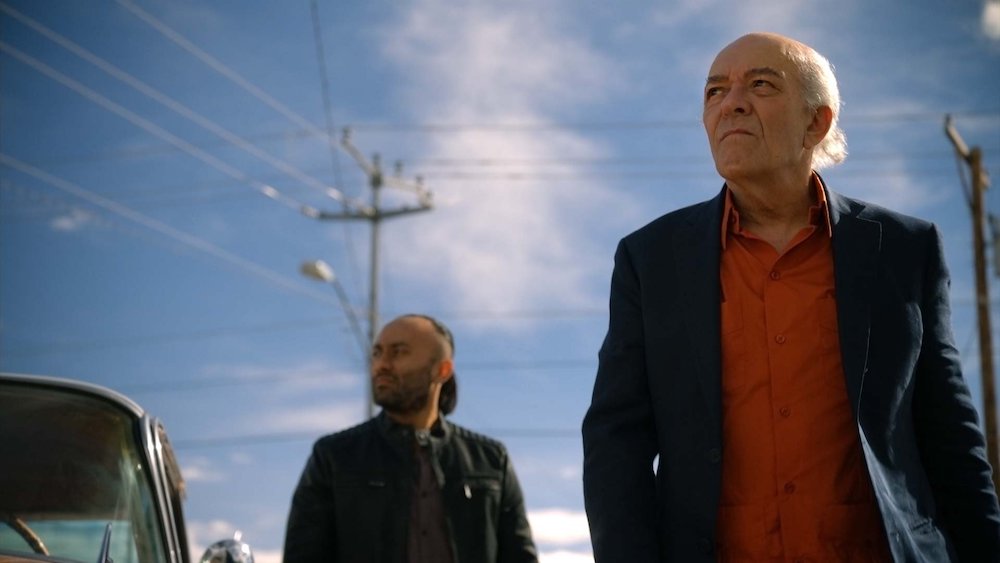 The best subplot was Jimmy’s, thankfully. It isn’t always the way, but I’m glad when the lead character gets an episode’s best material. It was a painful moment when he went to see Chuck, who told him in no uncertain terms that he’s never really cared about him. Those harsh words stung, as did Chuck’s speech about Jimmy always hurting the people around him, despite never meaning to. And he got a taste of exactly what Chuck meant, when he realised sweet Irene (Jean Effron) is still ostracised by her friends after deciding to settle the Sandpiper class action. Jimmy thought he’d manipulated the situation so beautifully that everyone would be a winner (the old folks get their big cash pay-out to spend in retirement, he gets his fair cut to solve his financial problems, and Irene gets her circle of friends back), but it hasn’t turned out that way. And in a sequence I really enjoyed, because it proved Jimmy’s a good person at heart, and maybe always will be, he destroyed his own reputation with the senior citizens to restore the status quo.

It was a fun moment, too, with Jimmy “accidentally” leaving his mic on while teaching them a yoga class, then allowing himself to be heard over the speakers admitting his fraud and underhanded scheme with Irene to line his own pockets. I felt sorry for Jimmy (who does seem to like those old timers, as much as his geniality is driven by money), but it also means he’ll have to find a new “business model” when he resumes being a lawyer. So, we’re a step nearer to Jimmy deciding to help criminals with their legal problems for big fat cheques. I’m sure this change of clientele’s going to drive a lot of season 4’s concerns. 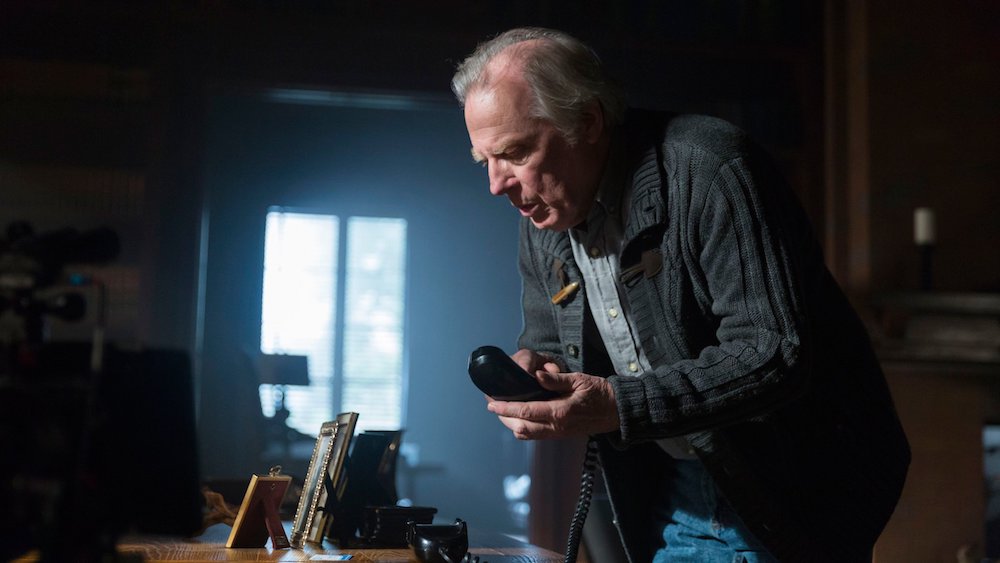 Chuck is the person who bore the brunt of this episode. Howard (Patrick Fabian) called his bluff over having to pay him $8 million to leave HHM, by financing the money personally, rather than go through the company and risk bankrupting it. And while Chuck has appeared to be doing well to overcome his electro-magnetic hypersensitivity, with Jimmy marvelling at the lights on in his once gloomy house, we later saw Chuck go through a very painful and protracted relapse. He spent hours ripping out every electrical device from his home, obsessing over something drawing power from the meter, and eventually resorting to tearing open walls to yank out electrical wire. And in the episode’s biggest shock, Chuck capped the season by committing suicide after setting fire to his half-destroyed home by kicking a gas lantern off a table.

It remains to be seen if this is the end for Chuck, or if he’ll escape the blaze, but it’s increasingly hard to see the relevance of his character going forward. The McGill brothers’ strained relationship has been at the core of the show since the beginning, sure, but is there anything left to add now? It would perhaps benefit Jimmy to move forward, unburdened by his love/hate relationship with Chuck, and yet still haunted by the truth behind his  brother’s words.

It’ll be a shame to lose the wonderful Michael McKean (who’s made Chuck such a complex villain/voice of sanity), but it may force the show to evolve quicker towards its end goal, while opening up space for characters like Kim to flourish…