It’s never good to be complacent about Twin Peaks: The Return. The unfolding of “Part 14” this week manages to clear up questions left unanswered after two episodes where, on the surface, the narrative was hardly moving forward and Lynch was accused of becoming over-indulgent. If you’re desperate for Lynch to start making connections, then this is as good a place as any. Just don’t expect all the ambiguous and inconclusive narratives to get a resolution by the end of the series. Lynch will not tie it all up with a neat bow.

At the same time, Albert Rosenfield (Miguel Ferrer) indicates past connections with their current case to Tammy Preston (Chrysta Bell). He traces the origins of the first Blue Rose case, an investigation into Lois Duffy undertaken by Cole and Phillip Jeffries in Washington in 1975. Duffy was shot by her own double. Her dying words, “I’m like the blue rose” and disappearing body clearly set the template for many of the strange deaths we’ve seen in the series, the last being the similar return of Ray Monroe to the Black Lodge. 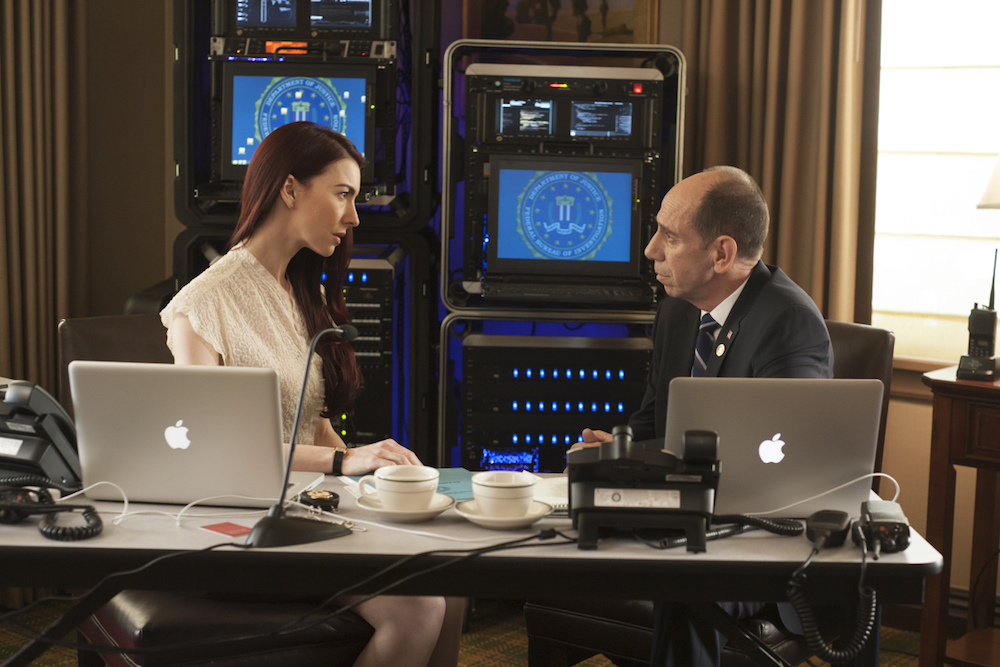 The significance of the Blue Rose, as Tammy points out, is that it doesn’t occur in nature. It’s as unnatural as these strange deaths and doppelgängers. Tammy describes these doubles as “a tulpa”, a word used in Tibetan Buddhism for a creature created through spiritual or mental powers; an emanation that could be described as a sentient imaginary friend. In this case, it seems, it’s a vehicle for the Lodge entities to exist in our world as numerous duplicates of an original body. Belgian-French explorer, spiritualist, and Buddhist Alexandra David-Néel describes the Tibetan belief thus: “Once the tulpa is endowed with enough vitality to be capable of playing the part of a real being, it tends to free itself from its maker’s control. This, say Tibetan occultists, happens nearly mechanically, just as the child, when his body is completed and able to live apart, leaves its mother’s womb.” I’m sure this is what we’ve seen throughout the series.

So, we have an explanation, of sorts, for Mr. C’s (Kyle MacLachlan) creation of Dougie to avoid his recall by the Lodge, and how Dougie became the refuge for Dale Cooper after his escape from that dimension. And remember, of course, that Dale himself dreamed about and employed Tibetan knowledge and techniques in his investigation of the Laura Palmer case back in Twin Peaks episode 2. Tulpas don’t necessarily have to be a duplicate of the original creator. They can be formed into anyone, and the series has been populated by many of these beings. It’s worth bearing in mind when we get to this week’s extraordinary scene with Sarah Palmer…

There is a strange interlude where the squeaking made by a shadowy window cleaner attempts to disrupt Gordon’s deductions. This felt like an attack, using sound frequencies to mess with the FBI’s listening equipment and Cole’s hearing aid, and many fans have suggested the footage of the shadow at the window bears a resemblance to one of the Woodsmen, and is looped and sped up. It heralds a revelation from ‘Deputy’ Diane Evans (Laura Dern) as Cole questions her about the last night she met with Cooper.

When Albert tells her about the ring inscribed to Janey-E that was found in Major Briggs’ stomach, she confesses that Janey-E is her estranged half-sister (E for Evans surely?), is married to Dougie Jones and lives in Las Vegas. Suffice it to say, the Las Vegas office is alerted and a perplexed agent Wilson (Owain Rhys Davies) is berated by his desk-thumping director (Jay R. Ferguson) for finding the right Jones among 23 others as too difficult: “Wilson, how many times have I told you, this is what we do in the FBI!” Another of those funny, essential Twin Peaks moments. However, let’s not forget that Gordon and Albert already know that Diane is keeping quiet about what is probably a trap being set up for them in Vegas. 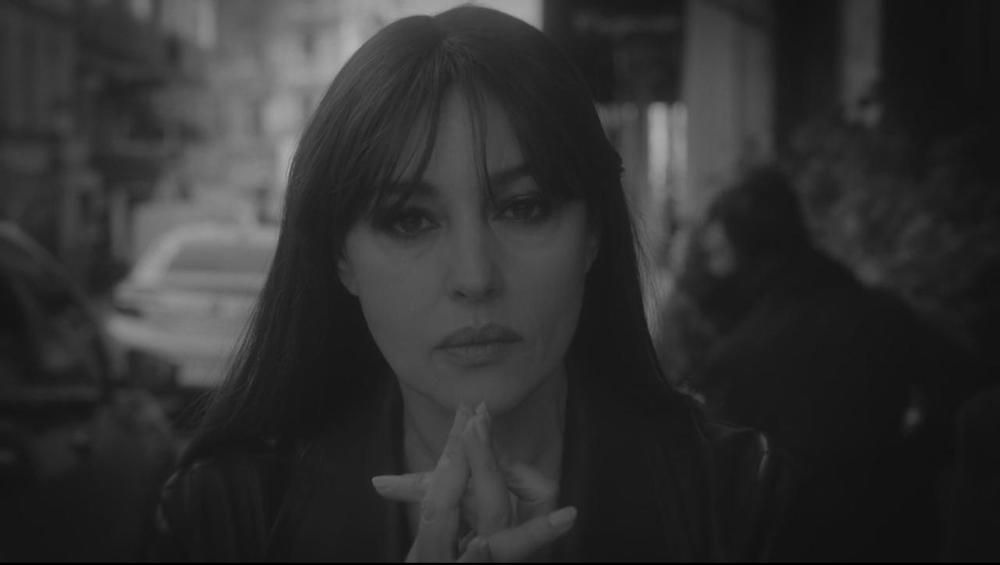 Gordon crowns these revelations with “another of my Monica Bellucci dreams”, and there is Ms. Bellucci, significantly rendered in black-and-white drinking coffee with Gordon and Dale in Paris. Cooper materialises out of thin air, the top of his head obscured by the frame of the composition. It aptly suggests we and Cole can’t fully identify the real Cooper in this dream, that his true identity is masked. Monica intones an ancient phrase — part Poe’s “A Dream Within a Dream” and part Upanishad prayer —  “we’re like the dreamer who dreams and then lives inside the dream.” And then, emulating her role as Persephone in the simulated reality of the Matrix films, she asks us, “but who is the dreamer?” The audience may also want to question whose dream we are in as that’s the Inception-like structure Twin Peaks: The Return is repeatedly taking on as it constantly unravels the reality we’re presented with each week.

Strikingly, the nature of Cooper’s identity is referred to in the dream, as Cole enters a flashback to a sequence in the old Philadelphia office in Twin Peaks: Fire Walk With Me. In an episode dedicated to him, David Bowie returns as the mysterious, long lost Phillip Jeffries to point at Dale Cooper and state: “who do you think that is, there?” It’s a meta-textual moment because even Gordon didn’t remember that bit from the film and it’s perfectly aligned, many years later, with all of our own questions about Mr. C, Dougie and Dale and the subversion of true identities. “Damn, I didn’t remember that,” cries Gordon, along with most of the audience I should think. Something interesting to think about, indeed, as a collective amnesia is lifted from Gordon and Albert’s memories and we all rush to find our copies of Fire Walk With Me. 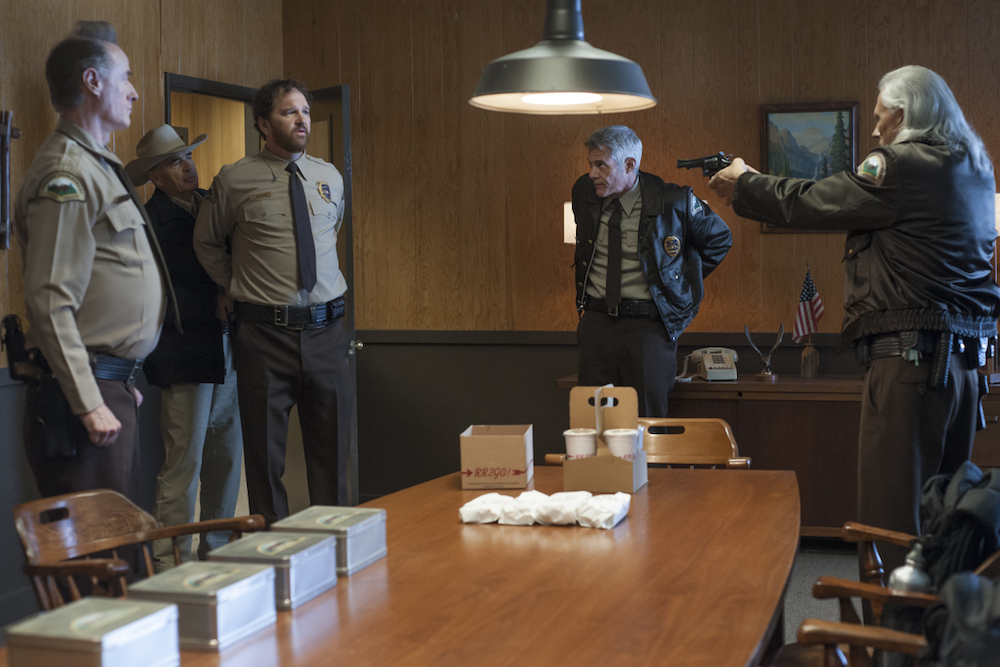 If you go down to the woods today, you’re sure of a big surprise. Certainly, Truman, Bobby Briggs (Dana Ashbrook), Andy (Harry Goaz), and Hawk (Michael Horse) get more than they bargained for when they follow Major Briggs’ posthumous directions to Jack Rabbit’s Palace deep amidst the Douglas firs. A little bit of house cleaning prior to this sees them arrest Deputy Chad (John Pirruccello), partly on the advice of Lucy (Kimmy Robertson) who observed him stealing the letter from Miriam that implicated Richard Horne for the hit and run and, by extension, her own assault. Truman simply states, “we’ve been watching you for months”.

Deep in the woods, pockets full of soil and 253 yards due east, they reach the magical spot where young Bobby listened to his father’s tall tales. The flashing of light, the sound of crackling electricity, the rising mist and a pool of oil suggest it’s a dimensional crossroads. A crossroads where the creature Naido (Nae Yuuki), whom Dale Cooper first encountered back in the purple room in “Part 3”, finds herself after her launch into space. 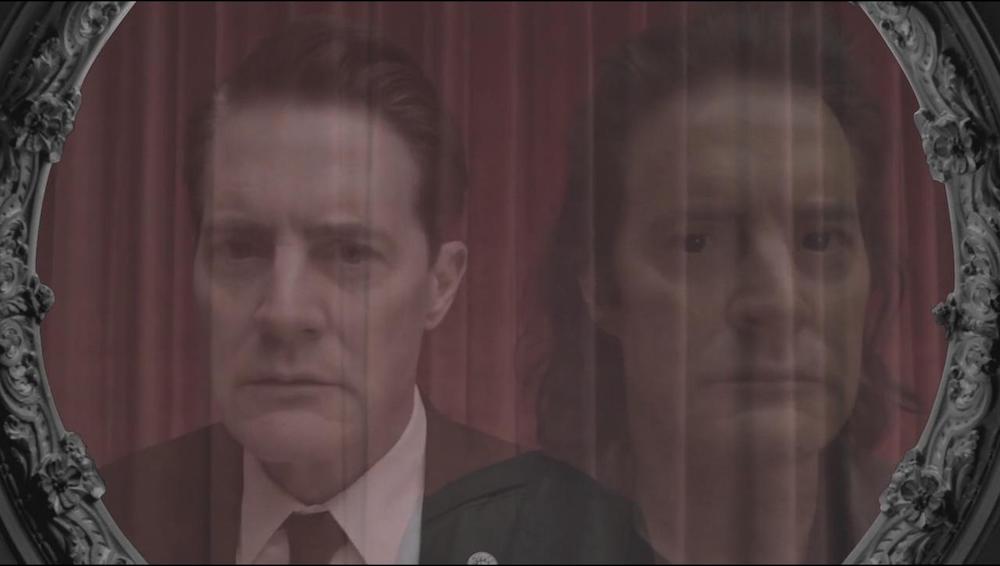 It’s also a portal, a white vortex similar to the black vortex that Gordon saw in Dakota, that swallows up Andy at 2:53pm and displaces him to the White Lodge to encounter The Giant, who now calls himself The Fireman (Carel Struycken). The Fireman reveals the hidden history to Andy — the Trinity test, the creation of BOB, the Woodsmen and the convenience store, Laura and her angels, the two Coopers, the telephone pole (flashing the number 6 three times), and the recap to the screaming girl from the original Twin Peaks pilot.

Time is displaced again and the figures of Bobby, Hawk, and Truman appear as ghosts in the woods, like a positive iteration of the Woodsmen, before reality snaps back into place and Andy appears, carrying Naido. He determinedly tells the others, “she’s very important and there are people that want her dead” before taking her down from the mountain. Andy, the bumbling, sensitive, innocent policeman, has been gifted with knowledge and purpose. It’s a return to the idea of good versus corrupted innocence that permeates Lynch’s work. 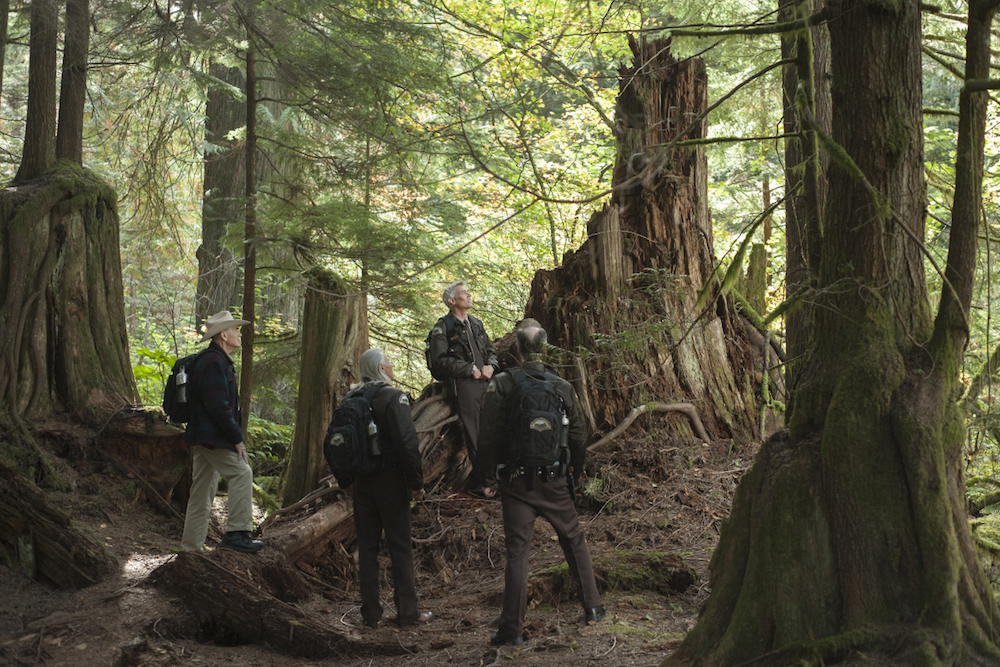 Naido is cared for and placed in a cell next to Chad, the “very bad person” who gives “good policemen a bad name” according to Andy, and a bloodied, battered drunk (Jay Aaseng) who simply repeats everything Andy and Chad say and copies Naido’s strange mutterings. There’s much speculation that the drunk is Billy, mentioned by Audrey and Tina’s daughter, both describing him bleeding from the nose and mouth and the blood pooling up on the floor. Remember that phone call Charlie made to Tina? At the end of this episode, in the Roadhouse, Tina’s daughter Megan (Shane Lynch) reveals what was said on the phone to Charlie about Billy. He apparently jumped over a fence, ran into their kitchen, and bled into their sink before running out of the back door. Take a look at the bloody state of the cell’s floor.

We next meet James Hurley (James Marshall) and walnut-pulverising Freddie Sykes (Jake Wardle), working as security guards over at The Great Northern. Freddie relates his own encounter with the vortex and The Fireman, when James asks about this talent for crushing walnuts with his green-gloved right hand. The gardening glove possesses “the power of an enormous pile driver” and was bequeathed to him by The Fireman who gave him specific instructions about its purchase. 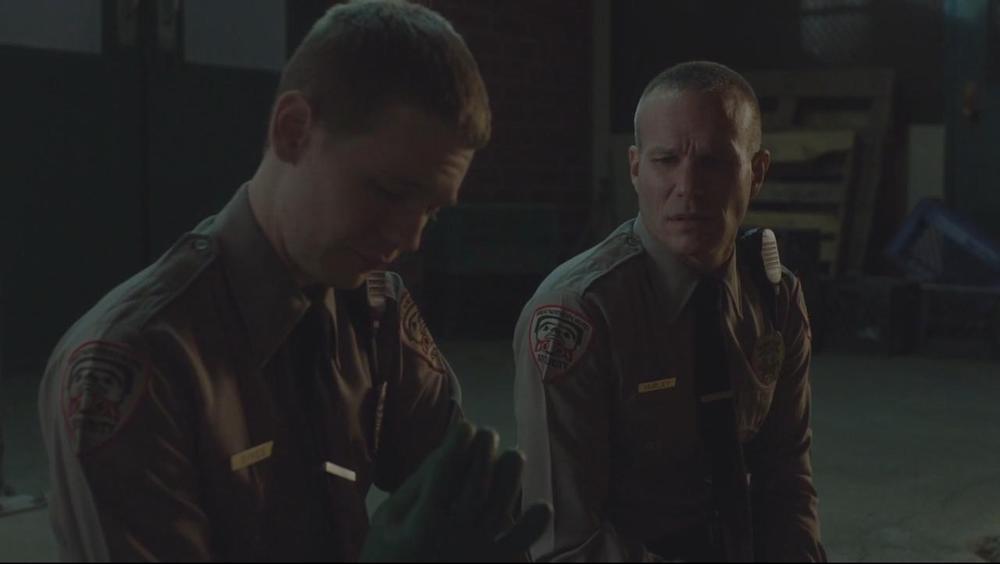 “Once you’ve got the glove on go to Twin Peaks, Washington, United States of America. And there you’ll find your destiny,” Freddie was told by The Fireman. And here he is, and why not. Is he there as the only one, another innocent, who could possibly kill Mr. C, that champion arm-wrestler equally possessed of mysterious powers? They go to check the furnaces at The Great Northern and James comes to a halt in front of a door. The odd whine, that Ben and Beverley have heard emanating from the lamp in Ben’s office, swamps the soundtrack.

Over at the Elk’s Point #9 Bar, Sarah Palmer (Grace Zabriske) settles down to a Bloody Mary at the bar but is hit on by a long-haired man in a ‘Truck You’ T-shirt (John Paulsen). She rejects his advances and he hurls abuse at her. Sarah’s another damaged female character in the Lynchian universe, and as we’ve seen she’s deeply troubled, still traumatised by the incidents of 25 years ago, but also affected by too close an encounter with the Black Lodge. She’s the wrong person for any man to verbally brutalise. “I’ll eat you,” Sarah responds when he asks her if she likes to “eat cunt.” 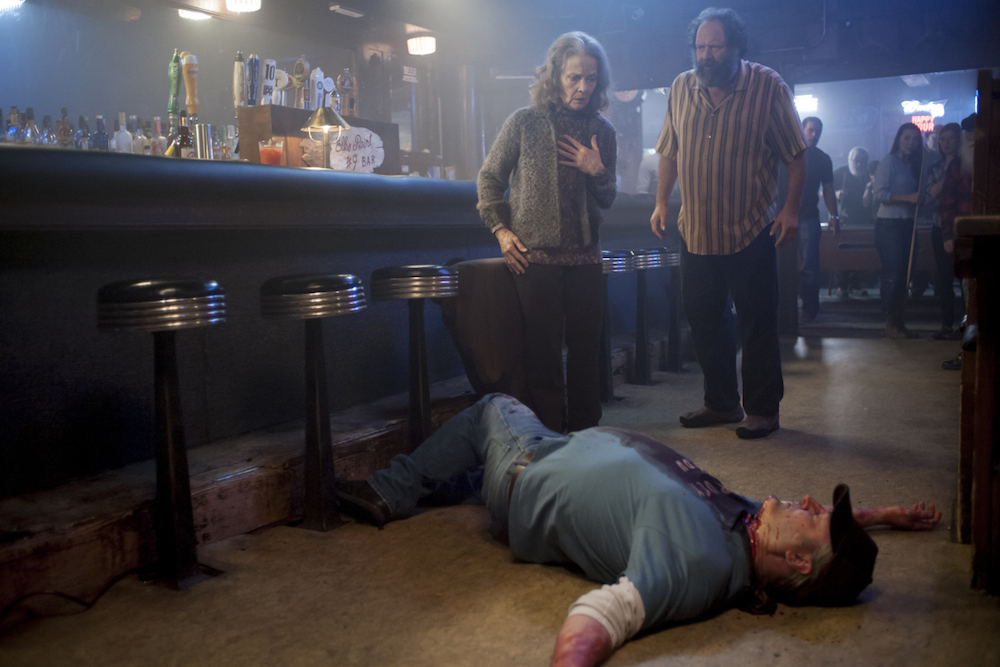 And she removes her face. Just pulls it off.

Yes, she takes her face off just as Laura Palmer (Sheryl Lee) did to Dale Cooper in “Part 2”. Except that the void where Sarah’s face was is dark and full of smoke, electricity sparks or blades flash, a hand floats by with its ring finger blackened (a nod to the significance of the ring finger and the owl ring wearers I’ll bet) and, as an evil smile fills the space, Sarah rumbles, “do you really want to fuck with this?” Her face snaps back and she bites a chunk out of the man’s neck and leaves him bleeding, dead on the floor. Has she been revealed as the Mother creature who attempted to stop Cooper leaving the Lodge? Is she part of The Experiment and the creature that killed Sam and Tracey back in “Part 1”? Whatever she is, it’s a shocking and disturbing scene.