Would you leave a child to die on a battlefield? Well, you might have second thoughts if that child was Davros (Joey Price), the future creator of the Daleks. That’s the dilemma for The Doctor (Peter Capaldi) when he inadvertently drops in on the Thousand Year War between the Kaleds and the Thals in “The Magician’s Apprentice”, which opens the new series of Doctor Who with a pre-titles sequence guaranteed to make you pay attention. It returns to a moral question posed long ago in “Genesis of the Daleks”; that “if someone, who knew the future, pointed out a child to you and told you that that child would grow up totally evil, to be a ruthless dictator who would destroy millions of lives… could you then kill that child?” Or do you bequeath him your sonic screwdriver and hightail it out of there?

It also delivers a good sketch of that war, the war of attrition Harry Sullivan once believed would see the Kaleds and Thals fighting each other with with bows and arrows. In this instance, it’s bows and arrows and biplanes spitting lasers. Add to these the deadly ‘hand mines’ that grab your ankles and pull you under the mud which, for young Davros, are a parallel to The Doctor’s own childhood fear of the unseen in “Listen”. On Gallifrey facing fear becomes a force for good, but on Skaro it leads to a determination to survive amid the destructive and chaotic forces of the battlefield where “you have got to make a choice” to live or die. The visuals are appropriately stark and resonant; evoking evil eye symbolism, psychic deconstruction, and horror cinema’s oft-replayed trope of the resurrection of the dead. 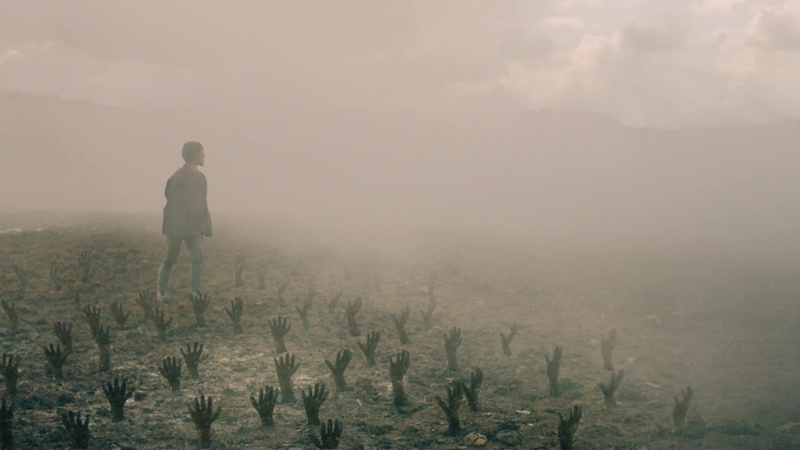 So The Doctor’s making a moral choice again; one so important he flees in shame, burying himself away from the summons issued by Davros’ gliding reptilian associate, Colony Sarff (Jami Reid-Quarrell). Sarff searches the Maldovarium, The Shadow Proclamation, and Karn (the latter location used in the brilliant “Prologue” where The Doctor asked Ohila (Clare Higgins) to deliver his confession disc to Missy).

Moffat continues with this accumulation of references and, before Missy (Michelle Gomez) self-indulgently attracts UNIT’s attention to The Doctor’s plight, he reveals an ancient, dying Davros (the wonderful Julian Bleach) clutching The Doctor’s sonic screwdriver and sending Sarff off to pursue The Doctor’s friends. As he well knows, The Doctor’s friends will be able to tease him out of hiding. It’s a replay of Tolstoy’s The Death of Ivan Ilyich and a reckoning between the powerful forces of life and death, compassion and revenge, on a cosmic scale.

Clara (Jenna Coleman), teaching Jane Austen to her class, offers a different view of childhood—the obverse to the war on Skaro—one of hashtags, Twitter, and rolling news. Moffat again acknowledges Russell T. Davies’ trope of world news as global connectedness when 4,165 planes are suspended in the sky mid-flight. The Doctor is not answering his phone but, as Clara indicates, he doesn’t appreciate gossip and Kate Stewart (Jemma Redgrave) is in an awful flap inside UNIT’s parky Tower of London HQ. The central heating must have packed in so perhaps she should call the British Gas helpline instead. Could someone put Clara in charge of UNIT? “Pardon my sci-fi” but she’s the one coming up with the rationale for finding The Doctor. 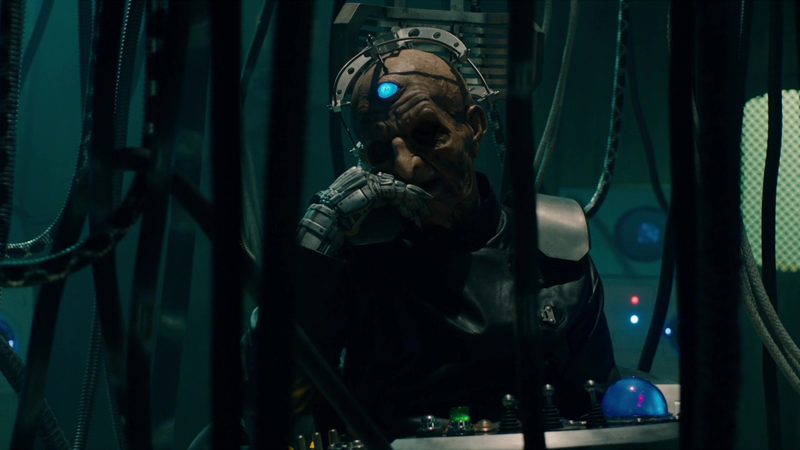 Moffat should take Missy’s advice: stop spinning plates and “cut to the chase”. Michelle Gomez’s performance is once again very bold; a pathological force of nature befitting the Bond vibe to Missy’s meeting with Clara on a Tenerife café terrace. It’s certainly an unusual stand-off and collaboration between “the puppy” and the Doctor’s ruthless enemy, foreshadowing the later tête-à-tête between the repentant Doctor and the resentful Davros.

However, it’s also getting rather tiresome Moffat has to remind us The Doctor can change gender. It’s safe to assume that a female Doctor is the long game being played out in Moffat’s tenure, but it’s become the grit in the oyster he likes to irritate certain fans with. Personally, I think it’s time he had the courage of his convictions…

The detour to Essex in 1138 is another drawn out, tedious exercise—expanding “The Doctor’s Meditation” prologue and lumbering it with self-aware pop cultural shenanigans, terrible jokes, a guitar-wielding Time Lord (playing his own theme tune), and an anachronistic tank. All this medieval Bill & Ted ‘Battle of the Bands’ buggering about just stalls the anticipated encounter between Sarff and the twist The Doctor’s medieval buddy—or should that be ‘dude’?—Bors (Daniel Hoffmann-Gill) is a Dalek agent sent to procure the TARDIS.

The highlight is Clara’s surprise at The Doctor’s charm offensive as a marked man hiding behind a veil of ebullience. “Hugging is a great way to hide your face” again reminds us of how we all lie to ourselves when faced with the deepest of crises. With Sarff’s arrival, the veil drops and Clara and Missy see how ashamed The Doctor is when Davros returns his sonic screwdriver. The child of war knows and remembers… 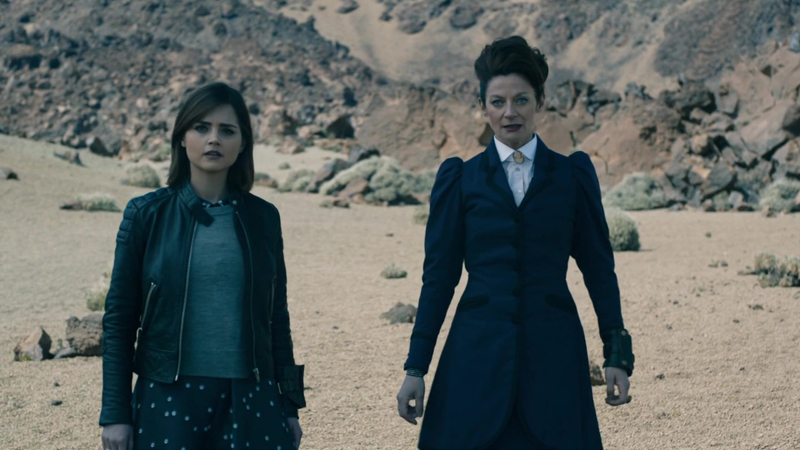 To cut a very long guitar solo short, it’s an elaborate trap playing upon The Doctor’s shame. All three are transported to a hospital ship that isn’t a spaceship—it’s the surface of Skaro—where The Doctor reluctantly meets the ailing Davros for a mutual encounter on the last night of their lives, and Missy and Clara go spacewalking.

Memories, remembrance and redemption are very familiar Moffat themes but they gain a significant resonance here when tied into the fate of an enemy. Presumably, if that sonic screwdriver hadn’t been left behind, then the destiny of the Kaleds and the creation of the Daleks would have taken a different course? The mutant in a tank that never, ever stops may never, ever have started. This takes us back to their powerful origins, to Raymond Cusick’s distinctive Skaro city interiors, and to their status as victims of war, of such rampant xenophobia and hatred that their chief scientist is scared enough to “seal everyone of your own kind inside a tank.” The Doctor’s fear is that he allowed Davros to survive and, by abandoning a child at its most vulnerable moment, he became his inspiration.

Davros and his children wait for their parent-by-proxy to return, and the scenes between Peter Capaldi and Julian Bleach are the absolute highlight of this episode; peppered with little touches that fans will appreciate, from the replay of previous encounters, including the iconic Tom Baker scene from “Genesis of the Daleks”, to the ubiquitous Dalek control room’s sound effects. 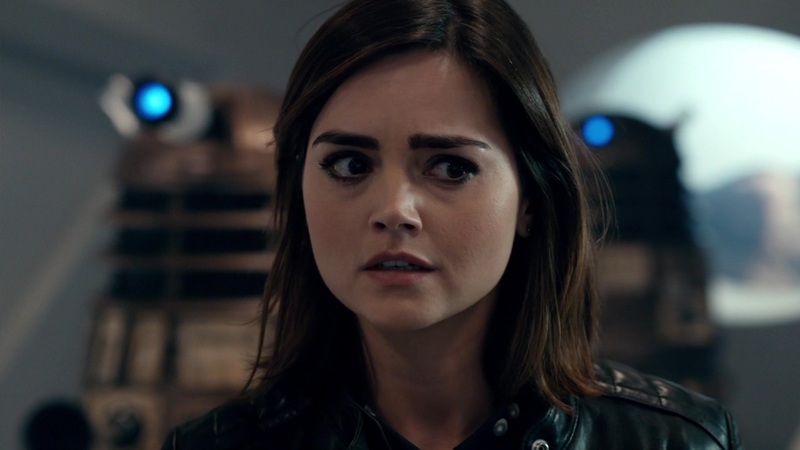 “I believe that for the ultimate good of the universe, I was right to create the Daleks,” reasons Davros, referencing that scene in “Genesis” about creating a virus that would wipe out all other life apart from the Daleks. It’s an argument that begat and survived the Time War and will end on Skaro, as Davros comes home as an old man to die with his children. Perhaps Davros is also talking about The Doctor here too?

In a sensational, tense final scene with “hunter and prey, held in the ecstasy of crisis”, Capaldi shows us a Doctor at the end of his tether: full of fear, begging for mercy, as he witnesses the Daleks murder Missy and Clara, then vaporise his TARDIS. Given the recent news about Jenna Coleman’s departure, is this really Clara’s demise and are we watching the rest of Series 9 as a flashback? And to what higher purpose is this act of destruction intended? To rip out of The Doctor an admission that compassion is wrong; that, like Tolstoy’s Ivan Ilyich, he must recognise in himself an existential reflection of Davros, a creature devoid of compassion and empathetic human connection?

And of course, in disavowing his compassion, The Doctor must surely go back to Skaro and destroy the young Davros? Well, on the surface that’s what the climax to this strong opening episode shows us… but this is a Steven Moffat script and I suspect there’s a smile behind the veil. A narrative reversal in “The Witch’s Familiar” we’re not yet privy to…