It’s fair to say Netflix’s Daredevil was one of 2015’s biggest surprises, because it did something fresh with a superhero indebted to Batman, in a show with conceptual similarities to The CW’s Arrow, while overcoming a negative perception of Daredevil thanks to a misfiring 2003 movie. In going darker and meaner than everything else in Marvel’s Cinematic Universe, Daredevil offered something for the slightly older crowd who crave deeper emotional stakes, narrative complexity, and mature content.

Naturally, expectations for Daredevil season 2 were high for those who fell in love with the adventures of blind lawyer-turned-vigilante Matt Murdoch (Charlie Cox); particularly in the wake of sister series Jessica Jones—which arguably improved on Daredevil’s formula, by digging deeper into emotional and social realism.

Like so many comic-book franchises of recent times, Daredevil takes loose inspiration from Christopher Nolan’s The Dark Knight for how to behave as a ‘sequel’—addressing the repercussions of a street vigilante fighting crime in Hell’s Kitchen. Although it doesn’t follow that movie’s ‘escalation’ train of thought (with villains also now pulling on costumes), as there’s actually no supervillain to defeat. Instead, this season asks ‘do the ends justify the means?’, and ‘what exactly is a hero?’, as Matt finds himself in conflict with two people ostensibly on the side of the angels, but whose methodology is often intolerant and cruel. 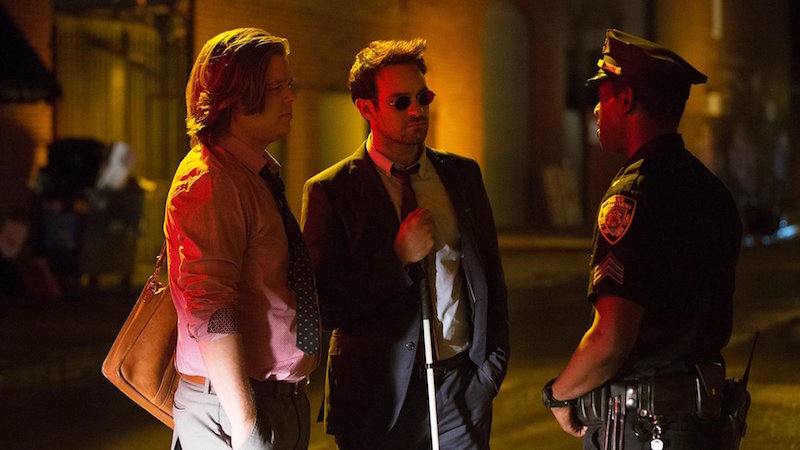 First, there’s Frank Castle (Jon Bernthal), a battle-hardened army veteran who mounts a one-man war against the ‘Kitchen Irish’ mob and ‘Dogs of Hell’ biker gang, after his family are murdered while and a police conspiracy protects the truth of what happened. Quickly nicknamed ‘The Punisher’ by the press, Castle becomes a boogieman for the criminal element, but his brutal methods and penchant for extreme violence frightens the civilian population—not least Matt Murdoch, who’s having to stop a fellow crusader perhaps suffering from PTSD, who’s been tipped over the edge by grief, and now believes like he’s above the law.

Secondly, we have Elektra Natchios (Élodie Yung), Matt’s college girlfriend, who arrives in Hell’s Kitchen just when her old flame’s relationship with secretary Karen Paige (Deborah Ann Woll) turns romantic. Always a feisty and selfish woman, it soon becomes clear that Elektra’s also a highly-skilled assassin and embroiled in a situation with the Yakuza and mystical cult ‘The Hand’. While Elektra’s less of a mystery to Matt because of their shared history, just like Castle she proves to be a dangerous and unpredictable friend because of her twisted desire to kill.

Both characters are recognisable comic-book favourites, that even casual viewers will have heard of. Elektra was played by Jennifer Garner in the aforementioned 2003 movie (plus her own 2005 spin-off), while The Punisher’s already appeared in three flop movies since 1989. Both Marvel characters benefit from appearing in this Netflix series, which simply has more time to flesh them out as three-dimensional beings, while never letting either overstay their welcome because they’re not the sole focus. It also helps that The Walking Dead’s Bernthal is spot-on casting—effortlessly bringing the quiet intensity and psychological turmoil of Frank to vivid life, swaggering around the mean streets in his jarhead haircut and a boxer’s face mottled with colourful bruises. 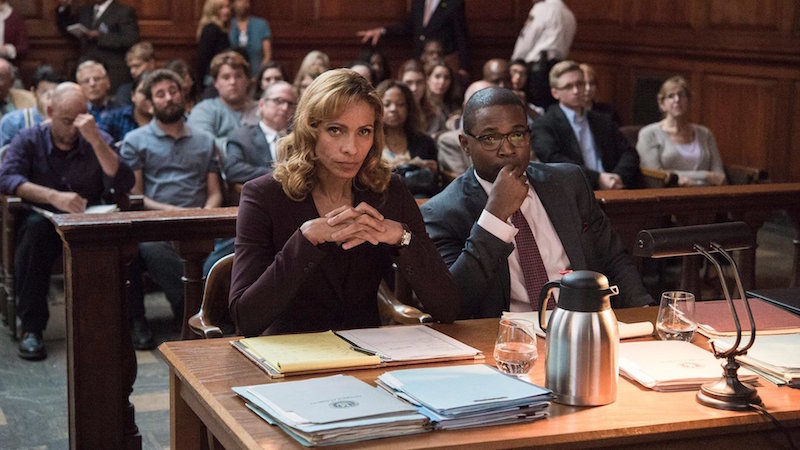 Yung’s take on Elektra is less of a home run. While she’s undeniably an improvement on Garner’s version (thanks to her being a black belt in karate, and the quality of scripts), the French actress’s performance can be a little stilted at times. Most disappointingly, I never got the feeling her relationship with Matt was as intense and passionate as it’s supposed to be. She mostly came across as a ‘psycho ex’ Matt tolerates because it’s currently advantageous to have a sidekick. Their present-day relationship just didn’t feel as sexy or tempestuous as it needed to—but, in all fairness, the writing must also shoulder some blame. Yung’s at her best whenever she’s allowed off the leash for the kinetic action sequences, or asked to tap into Elektra’s wild side, but it’s a shame the actress couldn’t find more gears to play. Or the writers didn’t take note of how Jessica Jones utilised its own sex scenes between Jessica and Luke Cage, which strengthened their bond and our attachment to them as a couple.

It’s only natural to compare and contrast this season to the first. I was pleased some of my concerns were tackled by the new showrunners, Doug Petrie (Buffy the Vampire Slayer) and Marco Ramirez, this year. Most notably, there’s a far more of the courtroom drama sadly absent from the majority of season 1—as the show was so focused on the origin of ‘Daredevil’ and the machinations of crime boss Wilson Fisk (Vincent D’Onofrio). This season, Matt and Foggy Nelson’s (Elden Henson) law firm agree to represent Frank Castle for his trial, which means both of Matt’s identities are involved in The Punisher’s story from different angles. It was a great idea, as was the eventual erosion of the Nelson & Murdoch partnership because Matt’s nighttime pursuits aren’t compatible with the rigorous demands of a new law firm. 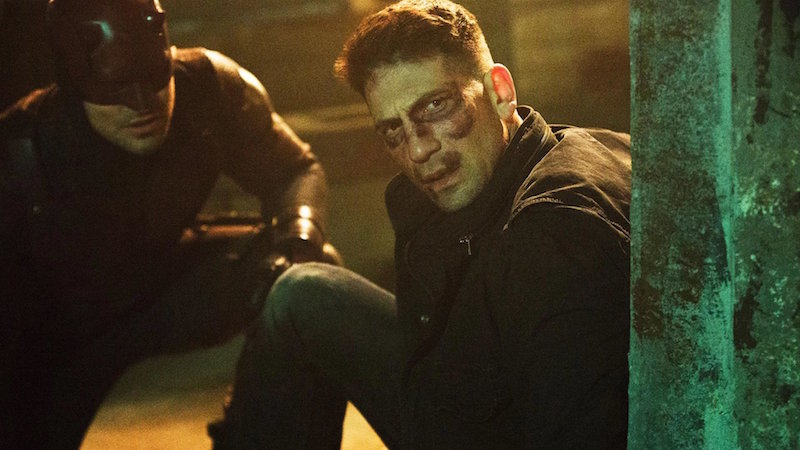 Karen Paige also gets more to do, although it’s a shame her budding romance with Matt was cut short by Elektra entering the picture—although a final scene suggests a more welcome evolution. For the most part this season, Karen became the show’s ‘Lois Lane’—investigating the Castle conspiracy with help from a friend at the New York Bulletin. She’s a key cog in the core mystery (even if the end result of that isn’t so exciting), and her exploits draw her closer to the damaged, isolated Frank in an interesting way. There’s a fascinating component to her story, too, in how Karen’s morals are revealed to be closer to Frank’s own (informed by her decision to kill someone last season), although more should’ve been done to give her controversial views more airtime. It felt like these issues were raised only briefly, then overwhelmed by other demands of the story.

Unfortunately, the most noticeable failing of season 2 is how it lacks a clearly defined villain, as the refreshingly human approach to Wilson Fisk/Kingpin was the single greatest thing about Daredevil’s debut year. Perhaps aware he’s an almost impossible act to follow, there’s nobody analogous to Fisk this time. Instead we have anti-hero Frank Castle, whose approach to crime-fighting rests in a moral grey area, before the plot switches focus to The Hand organisation. The only problem with The Hand is they’re essentially a horde of identical ninjas to be killed, and even the return of a familiar leader didn’t pique my interest. The problem with arcane organisations, doing weird things like filling enormous pits with human blood, is that it’s hard to invest in them beyond simple curiosity. Thankfully, there’s a rousing return for Fisk during a couple of prison-set episodes, but the excitement over seeing D’Onofrio once again steal scenes only highlights how this year’s storyline misses having a baddie to fill his shoes. Hopefully this won’t be an ongoing problem, and they’ll bring a worthy adversary to the fore for season 3. 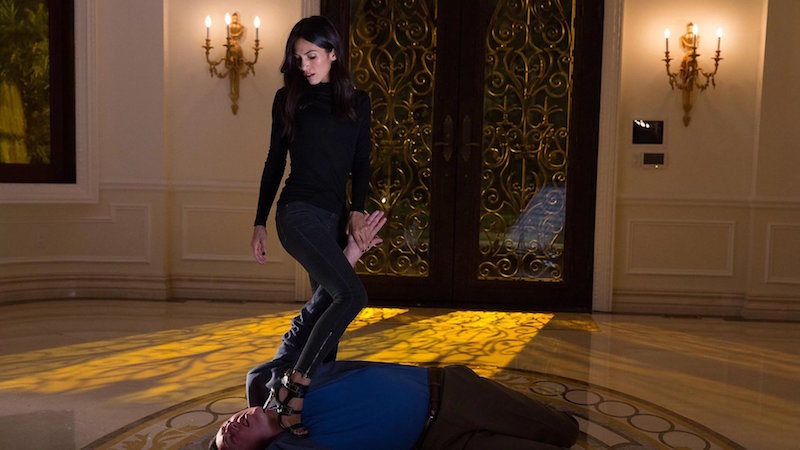 Daredevil’s existing strengths remain, although understandably things don’t feel as fresh and exciting second time out. We were introduced to a very unique corner of Marvel’s universe last year, with new characters to meet, and an excitingly dark and violent tone to savour, so it was obviously harder for season 2 to match that sense of discovery. The bruising fights remain as plausible and wince-inducing as always, with terrific choreography and weight to them, but I’d be lying if I said there was anything that improved on the formula. It’s more about seeing slightly different approaches to the violence, as Daredevil tends to have assistance from Elektra this time, and Frank’s fighting style isn’t based on martial arts.

Strangely, while there are flashbacks that elucidate aspects of the present-day story (mainly for Elektra and Matt’s backstory), these aren’t as commonplace as the trips into the past last year—which was obviously more of a twin origin story for how its hero and villain were shapes by their environments and upbringings. The only reason I mention it is because flashbacks would’ve been appreciated when it comes to Frank Castle’s history (as both a hero soldier, then family man back from war), but these never happen. It does makes sense to avoid flashbacks when a large part of the story revolved around Frank’s enigmatic background and motivation (although it’s not very mysterious if you’ve The Punisher films), but it also means we never get to see Frank as anything other than a violent killer. I was disappointed and surprised that, even once the conspiracy involving his family was explained, we were denied ever seeing another side to Frank—to let us see how losing his wife and kids transformed him..

While this season wasn’t as involving and exciting as the first, on the whole, it was still a very entertaining follow-up that corrected some mistakes. I was particularly relieved the writers avoided having a damp squib finale this time, and there’s no denying it delivers a fantastic mid-season run of episodes that are on par with the best season 1 offered. Daredevil is still the best small-screen venture from Marvel Television, and a benchmark for live-action comic-book storytelling in general.