Whereas Agents of S.H.I.E.L.D is tethered to the unfolding sprawl of Marvel’s cinematic universe (with The Avengers as elephants-in-the-room), Netflix have found a smarter way to play in the studio’s sandpit. First with the esteemed Daredevil, and now with Jessica Jones, the VOD heavyweight keeps to its own tiny corner of Marvel’s playground—Hell’s Kitchen, New York City—with only occasional wink-wink mentions of “the big green guy” and co’s existence.

This decision to go smaller-scale, focusing on street level crime and its heroes’ personal crises, means both Daredevil and Jessica Jones are tied looser to Marvel’s holistic worldview, and can hone in on characterisation and telling more intricate stories—largely unencumbered by what’s happening beyond their purview. (That said, one wonders how the major political shift fuelling Captain America: Civil War plot won’t impact Netflix’s shows next year). 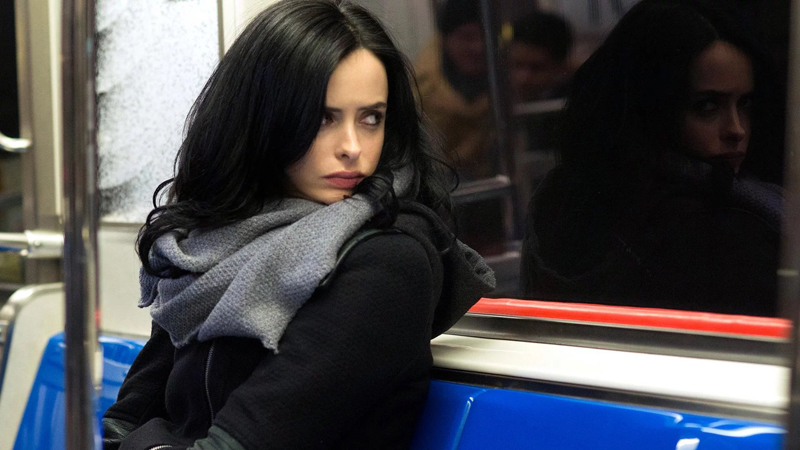 The eponymous Jessica Jones (Krysten Ritter) is a tough P.I working from out of her grotty apartment. Sardonic, clever, and a natural sleuth, Miss Jones is also blessed with amazing strength and the ability to leap so freakishly high it resembles flight (or “guided falling” as she describes it). Her adoptive sister, Patricia ‘Trish’ Walker (Rachael Taylor), is a model-turned-radio-presenter whose beauty belies a feisty woman with Krav Maga training, and Jessica accepts many cases passed her way by high-flying attorney Jeri Hogarth (Carrie-Anne Moss). Of course, Jessica’s life is about to be thrown into turmoil with the return of a devilish rogue from her complicated past: Kilgrave (David Tennant), a rakish Brit with the frightening ability to control people’s minds.

Along the way, we’re also introduced to taciturn barkeeper Luke Cage (Mike Colter), who quickly becomes romantically entangled with Miss Jones. A muscular black man with impervious skin, Luke’s mostly a cipher beyond his loyalty and attraction to our heroine—which is likely an intentional subversion of the sexual power dynamics in most fiction. Luke is Jessica’s ‘boy toy’ for much of the season—a handsome bruiser who rides around on a Harley and is only too happy to satisfy her carnal cravings.

An unavoidable and amusing aspect of Jessica Jones is its strong female gaze, with its males often occupying roles of traditionally lower substance (‘the hot boyfriend’, ‘the cute neighbour’, ‘the sidekick’, etc.) One exception is the story’s supervillain, of course, who configures to every Hollywood cliche: male, suave, and British. 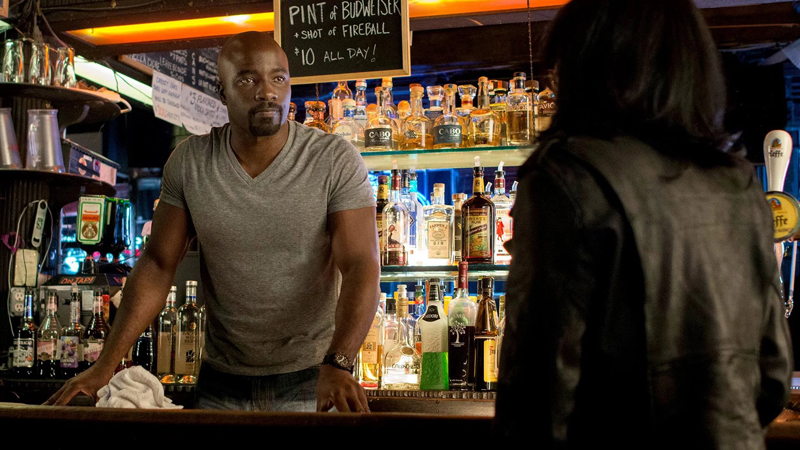 Kilgrave, it’s easy to say, ranks as Marvel’s most interesting and nuanced live-action baddie. Tennant may be known for the cheerful puppy-dog geekiness he displayed in Doctor Who, but here he manages to channel his boyish charisma into an altogether creepier, sinister performance. What’s impressive is how Tennant subtly shifts gears across thirteen episodes: beginning as something akin to Who’s The Master, ironically; before revealing a more insidious and unhinged edge; then ultimately becoming a destructive, lovesick bully. Kilgrave’s ability to impose his will on others isn’t anything new, but it’s rarely been thought through so well. Not only do we see how which Kilgrave uses his ability to gain status and power (winning at high-stakes poker by asking other players to fold), and keep himself protected from attackers (making bodyguards of strangers with a few choice words), but we eventually recognise how his gift has twisted his personality.

It’s not often a mainstream comic-book TV series delves into issues of rape and post-traumatic stress, either—but those are at the core of what Jessica Jones is about. Kilgrave’s difficult childhood gives us a modicum of sympathy for what he’s become in adulthood, but there’s no forgiving someone who’s become so accustomed to having his own way that he can’t handle independent women. (Jessica being an old flame he can’t enslave again because she developed immunity, so it’s her unavailability that makes her irresistible.) 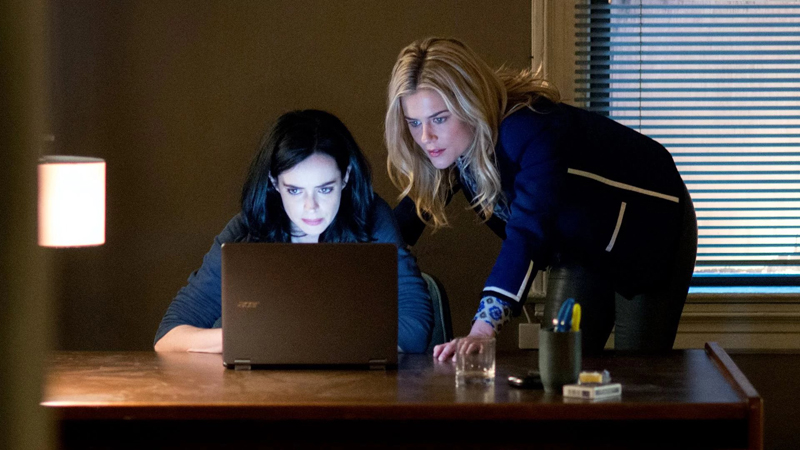 This first season is ultimately a twisted romance between a sexual predator and his favourite victim; a barmy relationship drama about a man-child from a broken home and a formidable woman he longs to ‘own’ as a living doll. An analogy made clearer during the mid-season episode “AKA WWJD?” when Kilgrave ‘plays house’ with Jessica inside a painstaking recreation of her childhood home.

As Jessica Jones, Ritter acquits herself very well and looks great in her signature leather jacket, blue jeans, and jet-black hair. Anyone who saw her being hilarious and gregarious in Don’t Trust the B—- in Apartment 23 will perhaps question this is even the same actress, as it’s such a contrasting performance. In Ritter’s hands, Jones is confident but aloof, sexy but never sexualised, physically strong but emotionally fragile. My only issue is how the season’s storyline doesn’t give Ritter a broad palette of emotions to play, as everything’s so focused on Kilgrave and the negativity his skin-crawling presences evokes.

Indeed, as much I enjoyed Jessica Jones, the season’s structure could have been crafted better. It takes awhile to hit a stride (perhaps too hopeful the audience will binge-watch?), manages a compelling five-episode peak in the middle, then begins to slowly droop before a finale that just isn’t big or climactic enough. If you thought Daredevil went out with a whimper with a lacklustre alley brawl, you ain’t seen nothing yet. We spend so long in circular plots involving Jessica entrapping Kilgrave, only for him to escape or be let go, that by the time he does get his just desserts I was slightly over it. 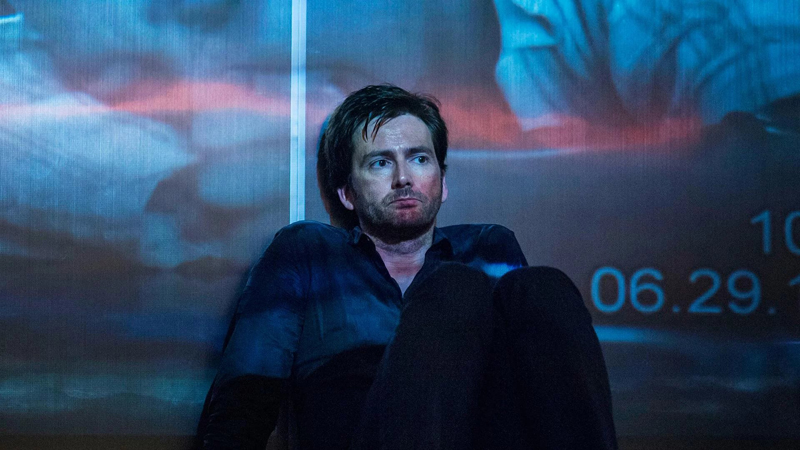 It might have been better to give Jessica a few different cases to work on alongside dealing with Kilgrave, but instead this mind-controller comes to dominate the entire season… and his ubiquity limits the performances we get from the characters under his shadow. Maybe it’s a sign the writers didn’t have a lot of confidence with plot lines beyond Jessica and Kilgrave’s shared history? The subplots that do exist (Hogarth’s acrimonious divorce from her lesbian lover, an annoying neighbour unaware Kilgrave murdered her brother by proxy), feel like half-baked diversions to prevent things getting too stale.

It’s also true this show will have mixed appeal for anyone drawn to it because of Marvel’s branding or its comic-book affectations, because Jessica Jones is easily the least ‘super-heroic’ show of the many on television right now. Kilgrave’s powers get appreciable screen time, which really does help its cause, but there are times when I’d forget Jessica can stop a moving car with her bare hands—and, to be honest, often questioned why her super-strength’s even necessary. It comes in handy for when thugs attack her, but it’s not an essential aspect of Jessica’s character or how she ultimately ends up defeating her nemesis. The show is a psychological drama that uses its superhero underpinnings more like a garnish. 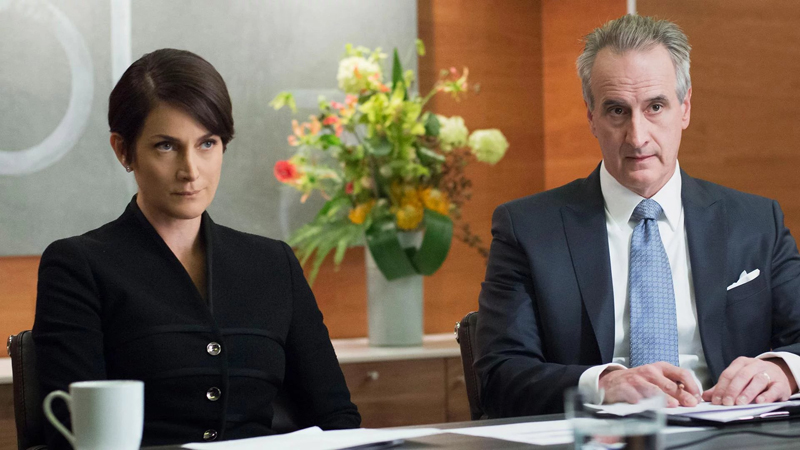 Despite all that, and for all its narrative flaws, it’s easy to recommend Jessica Jones. It’s a great deal more interesting than most other genre shows because of its mature approach to sensitive subject matter, and the casting is a delight. It can also be relied on for a cool visual or clever idea to enhance what’s happening—my favourites being Luke Cage touching a power saw to his stomach to demonstrate his unbreakable skin (which later becomes a curse when a vital injection’s required), a moment when Kilgrave nonchalantly walks into a family’s home and compels their two kids to wet themselves in a closet, and the notion of there being a survivor’s group for people who’ve been ‘Kilgraved’.

I just hope season 2 mixes things up; providing opportunities for its characters to fight over varying problems, lighten up slightly, and get involved in situations that don’t feel like soul-crushing burdens.