I haven’t been blown away by Preacher, and I don’t know many people who are even watching. And of those that are, it hasn’t become a hot topic of discussion. It just sort of exists as a live-action version of the comics; more the result of inspiration than adaptation. The show has had its highlights, a few great moments (most direct lifts from the source material), but has largely been a very haphazard mix of good and bad. I don’t think it’s hung together all that well over ten hours, but I can appreciate the huge challenge involved with having to bring these characters and its world to life—without scaring newcomers away. It’s just a shame that by taking a ‘softly softly’ approach, most people seem to have gotten bored—made worse by Preacher being overhyped by those expecting the graphic novels made flesh?

“Call and Response” was a decent enough finale, all things considered, and with expectations eroded over the preceding episodes. It primed a second season that will presumably follow the comic book’s storyline more accurately. The last scene at the Five Aces Diner is the first panel of Preacher #1. Although, who can really say? AMC aren’t made of money and the first season hasn’t become a Walking Dead-sized smash hit to warrant the expense a cross-country road trip implies. 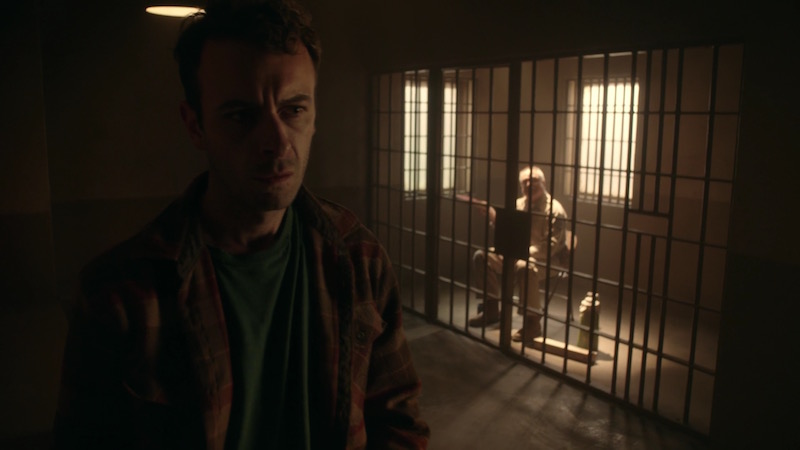 Writer-director Sam Catlin brought most of this season’s storylines to a close in this final hour, to varying degrees of success. I didn’t care for the situation with Tulip (Ruth Negga) capturing their erstwhile partner-in-crime, Carlos (Desmin Borges), and taking him to Jesse (Dominic Cooper) in the trunk of her car for execution. We got more flashbacks to fully explaining who Carlos is, and why he’s so important (he sabotaged Tulip and Jesse’s bank robbery because he was jealous of their happiness as expectant parents), but it was a last-minute info-dump that wasn’t very appealing. We didn’t know Carlos. We didn’t care about Carlos. And it didn’t feel like a big enough revelation to hang such a large chunk of the finale on. The fact Tulip miscarried as a result of what Carlos did made some sense of her prickly demeanour towards Jesse all season, but again… it all came so late in the game. It wasn’t worth the annoyance of being kept in the dark so much for nine episodes, with these flashbacks delivered piecemeal like it was some grandiose mystery. It really wasn’t.

Still, at least the finale delivered on its main promise: Jesse holding a final Sunday service at the Annville church, where he promised his congregation to bring God Almighty down from Heaven to speak to them directly. Using the angel’s phone and a severed hand, Jesse kept his promise and there was a very entertaining and enjoyable goofy sequence where ‘God’ appeared by video-call and attempted to answer everyone’s questions. Only, it was only an imposter in a false beard and fake eyebrows, who Jesse compelled with his power to explain that the real God is missing. A twist that wouldn’t have surprised Preacher fans, but triggered the ‘mission to find God’ road trip by the episode’s end. Hopefully, that’s enough of a hook to draw the TV-only viewers back for next year. 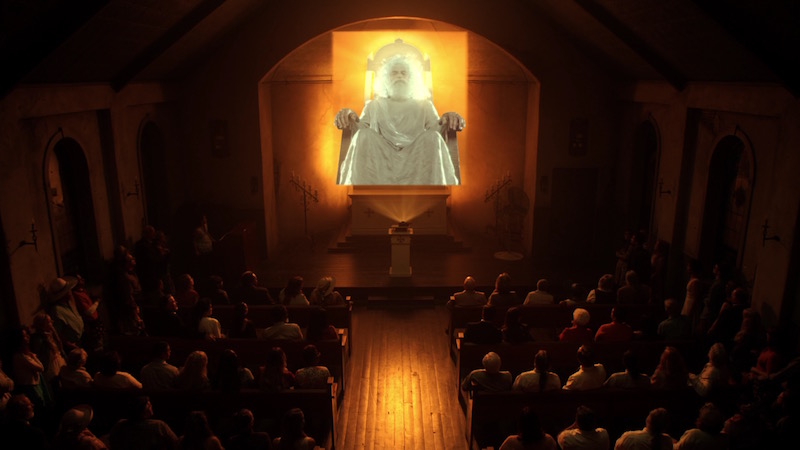 One other moment worked well, too: Sheriff Root (W. Earl Brown) interrogating Cassidy (Joe Gilgun) outside his jail cell, having realised this Irish out-of-towner is actually a criminal vampire he can torture for information about his missing son Eugene (Ian Colletti). It was a tense, dark scene, and I’m glad Root is now a character aware of the supernatural, who will most likely chase after Jesse, Tulip, and Cassidy next year. The only thing that puzzled me is a later with Eugene revealed to be working at a diner, as it seemed very wrong to push that entire subplot into a hasty resolution that didn’t make sense. How did Eugene get back from Hell exactly? Why isn’t Arseface messed up from the experience? Doesn’t he blame Jesse for what happened? And why hasn’t anyone told his dad, Sheriff Root? Maybe I missed something, or the idea is to explain things next year, but it seems like a big oversight for a storyline and character who’s been a big part of the show from the start. 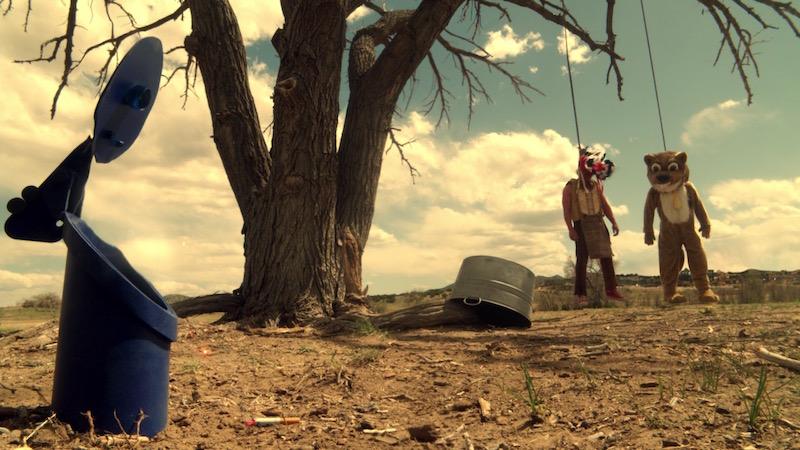 It was also disappointing to see Susan the Seraphim (Julianna Potter) and Saint of Killers (Graham McTavish) were likewise pushed into a denouement, despite the fact last week made it feel like they’d be key figures in the craziness about to hit Annville. Their scene together was absolutely awesome, thankfully, with the SoK getting his first earthly kill and proving his strength because she wasn’t able to resurrect elsewhere. His involvement promises many great things to come, but SoK is a tricky character on the page and will be even more difficult in a live-action context. We’ll see how the writers fare next year. I also didn’t like how Donnie (Derek Wilson) was suddenly back under the control of Jesse’s ‘Voice’, considering the earlier development with him intentionally deafening himself to get the upper-hand. It felt like we’d lost a scene explaining this change in circumstance.

Jesse’s church explodes very early in the Preacher comics, so we always knew this was coming, and likely to form part of the finale. And I liked how they handled it, with the entire town being destroyed after a methane gas leak was allowed to go critical when the guy keeping the system running presumably had a heart attack while fucking a ball-gagged prostitute. (That shot of the Annville church being demolished in a blast wave was a stunning visual effect, too. It looked like they spent a big chunk of the episode’s budget on just that one moment, frankly.) It was a big confusing to then see Jesse, Tulip and Cassidy inside a diner discussing their road trip, but I presume they’d left town by then—so this was somewhere else? Which would mean Eugene’s not employed at Annville then? Not sure it all hangs together. It would’ve made more sense to destroy the town after the scene where they leave Annville in their car. 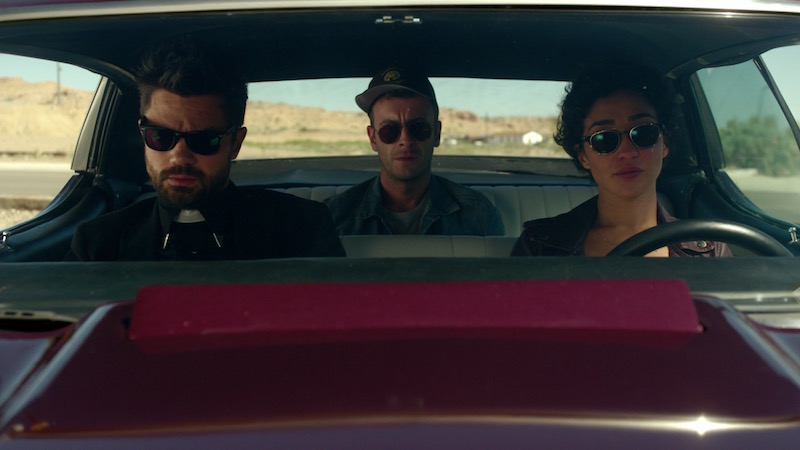 It sounds like nitpicking, and I guess a lot of it is. I just hold certain shows to a high standard, and given the people involved with Preacher it’s not unreasonable to expect things to be watertight. If they’d produced a more knockabout, crazy show, I would perhaps be more lenient. But, from the start, it’s been a quirky show with an ambition to be seen as something deeper and smarter than the scuzzy comics, in some ways, so I’d like to see the writing reach a lot higher: less holes, less random shit, less wasted opportunities, less confusing turns of events, and more cohesion.

To end on a positive, “Call and Response” heralds the end of this prequel/remix of the Preacher comics. I understand and sympathise with why they opted to take this approach, as it allows for more freedom and opportunities for the writers to put their own stamp on the material. I was never against the idea of keeping events in Annville for awhile, in all honesty. I just think we could have reached this climax by episode 6 or 7, and got to the meat of what Preacher’s all about a lot sooner.