Sylvester Stallone had to adapt to the post-Die Hard (1988) world, as audiences began to gravitate more towards the ordinary guy thrown into an extraordinary situation. Rambo III (1988), released the same year as the game-changing Die Hard, underperformed at the box office, then Tango & Cash (1989) and Rocky V (1990) flopped ahead of Stallone making what he considers his worst movie—Stop! Or My Mom Will Shoot (1992). It’s little wonder he got back to basics with Cliffhanger, hiring Renny Harlin (the director of Die Hard 2), and making an effort to present himself as an action hero who made mistakes and could actually be beaten.

In the early-1990s, Stallone was actually circling three movies for Carolco Pictures: a John Hughes comedy with John Candy about feuding neighbours called Bartholomew vs. Neff; a sci-fi horror called Isobar about a mutated creature let loose on a high-speed train, set to co-star Kim Basinger; and a movie called Gale Force, pitched as “Die Hard in a Hurricane”, about an ex-Navy SEAL fighting modern pirates during a storm. Renny Harlin signed on to direct the latter for $3M, but Carolco got cold feet over the movie’s complex visual effects and $40M budget and cancelled the shoot a few weeks before production was set to begin. Harlin got to keep his money, however, and almost immediately moved into Cliffhanger—which was even more expensive at $70M but, presumably, Carolco felt more confident about how to achieve the visual effects (which were Academy Award-nominated, but predictably lost out to Jurassic Park that year). 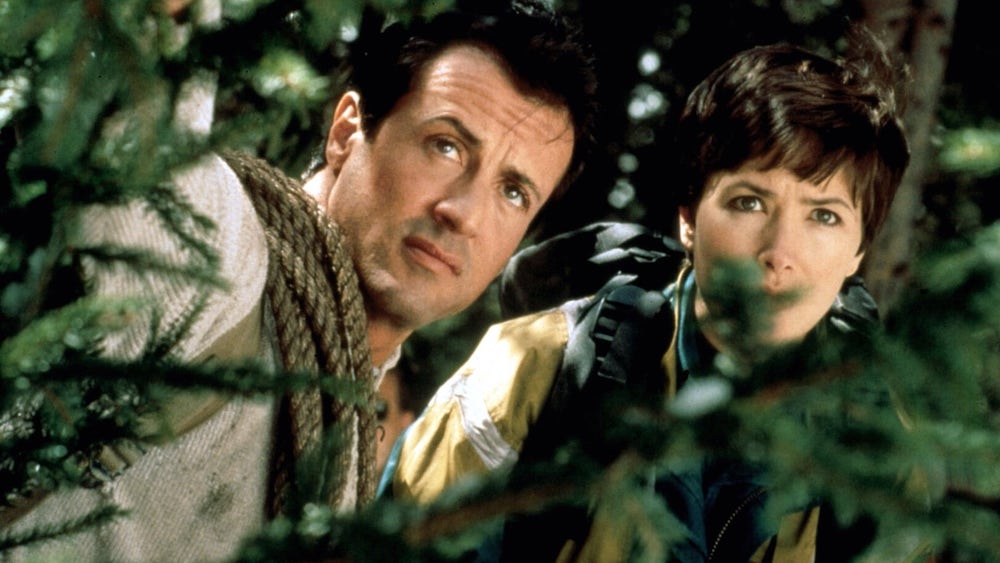 Based on a premise by John Long (a rock climber who writes books on the subject), Cliffhanger could itself be described as “Die Hard on a mountain”. The plot finds mountain rangers Gabe Walker (Stallone) and Hal Tucker (Michael Rooker) embroiled in the failed heist of Eric Qualen (John Lithgow) and his team or mercenaries after their plane crashes in the Rocky Mountains after trying to hijack $100M in uncirculated bills from a US Treasury aircraft. Qualen needs their help in locating the stolen cash, which has been dropped across the terrain in three high-tech suitcases, so Gabe and Jessie do what they can while disrupting the effort and fighting back against the robbers.

Cliffhanger is a little overlooked these days, perhaps because it’s seen as one of the many Die Hard knockoffs and arrived towards the end of Stallone’s heyday in Hollywood. After this movie, there was perhaps one last hurrah with Demolition Man (1994) before The Specialist (1994) and Judge Dredd (1995) seemed to indicate his days as a huge box-office draw were over. That’s a shame because it’s actually one of the better ’90s action movies and one of the last to be using so many practical effects and miniatures before CGI took over and, admittedly, made the scale of these movies far bigger. I distinctly remember watching a Making Of special on television and was flabbergasted to realise the final action sequence was done using a remote control helicopter. Even today, it doesn’t seem like that’s the case, and the effects have aged better than any mid-’90s attempt at a CGI chopper would have achieved. 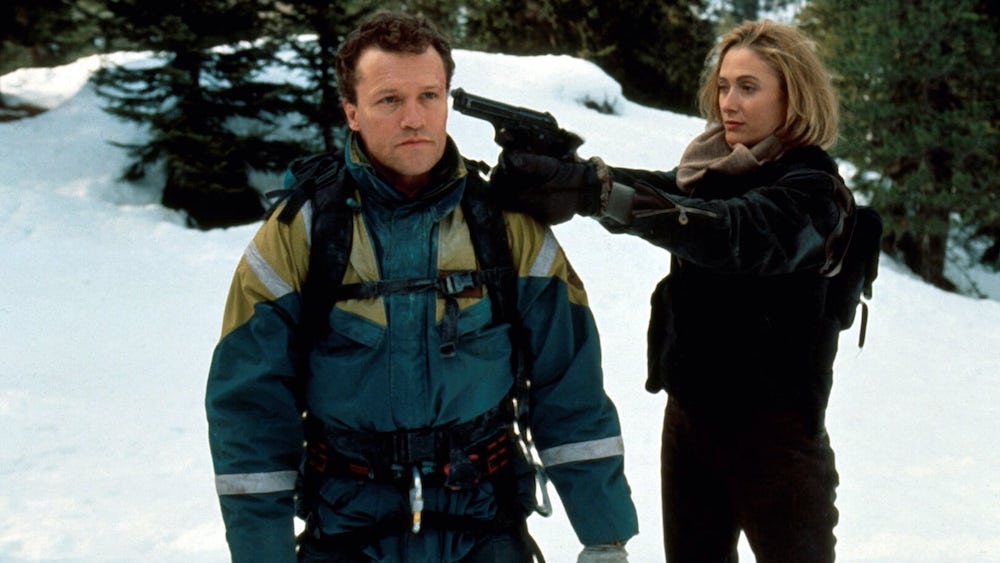 The movie starts very strongly with an unbearably tense sequence where Gabe is helping his friend Jessie and his girlfriend Sarah (Michelle Joyner) off a perilous peak. He sets up a wire from their position to a rescue helicopter on an adjacent peak, then holds it tight as they make their way across, only for nervous Sarah’s harness to break and leave her dangling (her life held by a thread), until Gabe manages to get across to her position and takes her hand until it slips out of its glove and sends her plummeting to her death. It’s a heck of a way to start the movie and, frankly, the rest of the movie never gets close to it in terms of sheer edge-of-your-seat tension and tragedy. It was spoofed in a few movies (Ace Ventura: When Nature Calls and Spy Hard), but I’m always surprised it’s not a common reference point for good cinematic suspense.

The rest of the movie is more straightforward and lacks the same emotional engagement, particularly because Lithgow’s on hammy form with a wavering English accent. But things are never boring and Harlin handles the action an drama very well, ensuring it’s plausible but not without moments of nonsense – such as a moment when Gabe bench-presses one henchman (Leon Robinson) up and through a stalactite in a cave, or when another baddie (Craig Fairbrass) takes sadistic pleasure in kicking Hal half to death on a cliff-edge while monologuing about the delights of soccer. And throughout it all, Stallone’s character seems a little more ordinary than usual; taking a beating, getting bloodied, struggling with the elements, and not being quite as unstoppable and superhuman when compared to John Rambo (which audiences at the time still saw him as). Stallone co-wrote the screenplay and the Die Hard influence is very clear—Lithgow doing an “Alan Rickman”, the wise-ass taunting of villains with “Want to trade?” written on the last remaining dollar in a retrieved suitcase, etc.—but that’s more a sign of the times. The very next year we’d get “Die Hard on a bus” with Speed (1994). 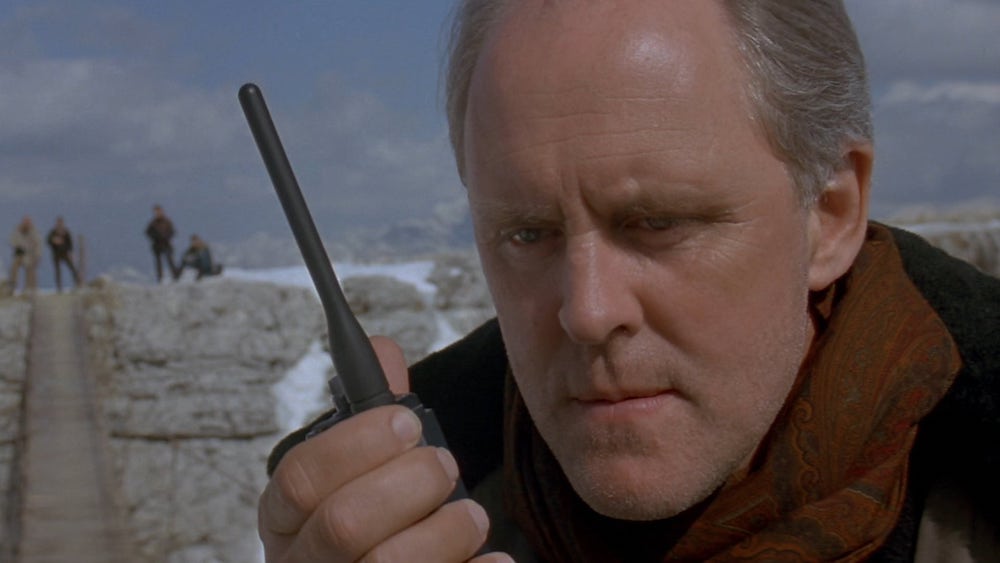 Now 25 years old, Cliffhanger has aged remarkably well. There are a few occasions when you can spot Stallone’s stunt double Wolfgang Güllich (whom the movie’s dedicated to because he died in a car crash shortly after filming), and you can more easily notice scenes on a soundstage made to look like the outdoors with styrofoam rocks covered in fake snow, but the miniatures don’t stand out and the location shooting across the Dolomites range of mountains in Italy. And for fans of movie stunts, this still contains the most expensive aerial stunt ever performed, because Simon Crane was paid a cool $1M to transfer himself from one plane to another in flight at 15,000 feet (although he technically couldn’t get inside the second plane, so clever editing gives the illusion he did).

A sequel was mooted, working titled Cliffhanger 2: The Dam, which would have seen Gabe Walker fighting terrorists that had taken over Hoover Dam, but nothing ever came of it. A remake has also been on the cards since 2009 and Stallone still expresses interest in filming a sequel—as he’s on something of a valedictory lap with new instalments of Rocky and Rambo in his later years.

In summation, Cliffhanger was always one of my favourite Stallone movies, and one of the most underrated action movies of the 1990s. It’s let down by being so clearly modelled on better movies like Die Hard, but Stallone’s on great physical form, you get invested in the crazy situation, and now it has added throwback appeal because there’s a refreshing lack of digitally augmented avalanches and impossible-looking stuntwork. 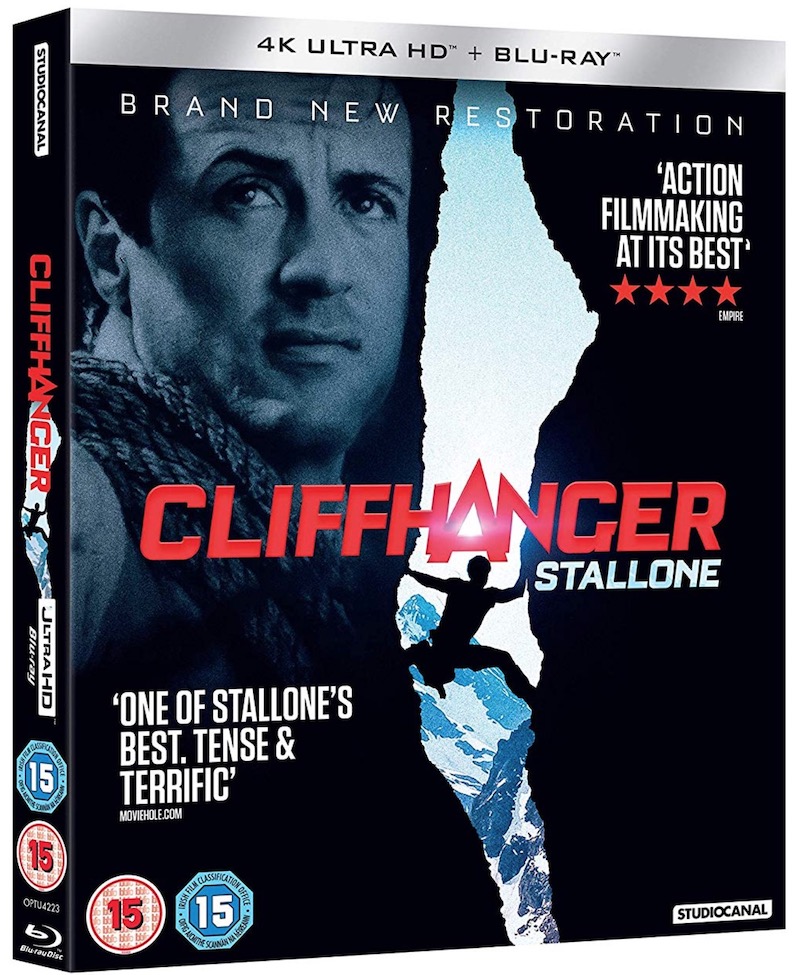 Cliffhanger arrives with a 4K UHD transfer of the 35mm movie, shot using Panavision cameras and lenses, restored from the camera negative in its 2.35:1 aspect image. The quality is slightly better than the regular 1080p Blu-ray, but it’s not a night and day difference. HDR helps give things an added visual wallop, especially with the bright snowy whites, while film grain is nicely resolved.

The puzzling downside of StudioCanal’s UK release is its lack of a Dolby Atmos/Dolby True HD sound mix, which will be found available in other territories, so we only get a DTS-HD Master Audio 5.1 track. It’s a decent mix and isn’t displeasing to listen to, but I’ve come to expect a superior experience with 4K UHD discs. Simply knowing a Dolby Atmos soundtrack exists (and that 4K is a Region-free format) might persuade home theatre connoisseurs to wait and import Cliffhanger from overseas. The US disc is scheduled for 15 January 2019.