This is the kind of remake I appreciate: one that takes the same idea and updates it for a new generation. When 1988’s Child’s Play came out, directed by Tom Holland (Fright Night), it was spooky to imagine inanimate dolls moving all by themselves. To make that happen in fiction usually involved possession by a malevolent ghost, but screenwriter Don Mancini tweaked expectations by having a serial killer evade capture by transferring his soul into an unassuming toy. It was a ludicrous B Movie concept, but Child’s Play launched a franchise of six sequels that are still being made.

This new Child’s Play doesn’t have the blessing of its creator, Don Mancini, who’s written every instalment until now and has directed three of them. That’s a shame, although in some ways this remake’s only tangentially a ‘Chucky’ movie because it’s impossible to make a killer doll film without evoking Child’s Play on some level. And why not utilise the brand name if it still has some cachet? The crowd’s response to Chucky’s moment in Ready Player One (2017) proved he’s still popular and fun, right? Hollywood loves a remake because of their built-in audiences.

Lars Klevberg’s Child’s Play is a welcome update because, 30 years after the original’s release, moving and talking dolls are commonplace. Or at least not beyond the realms of possibility as artificial intelligence and robotics grow ever more advanced. A plastic doll moving its limbs and talking is no longer a shocking notion, so there are more interesting possibilities to explore the dangers of A.I and consumerism.

For that reason, there’s no soul-transplantation Haitian Vodou ritual in Klevberg’s update, just a high-tech doll with ginger hair that has its safety protocols removed by a stressed Vietnamese factory worker before he commits suicide. “Chucky” (as the ‘Buddi’ doll obviously comes to be known) winds up in Chicago, Illinois, where it’s bought by single mother Karen Barclay (Aubrey Plaza) at a knockdown price due to being returned as defective, and is duly gifted to her hearing-impaired 13-year-old son Andy (Gabriel Bateman).

Without a psychopathic man inhabiting Chucky shell, desperate to find a more suitable human body to possess and continue his killing spree, in the 2019 version remake we instead spend time seeing the corruption of Chucky’s core programming. His glitches are amusing to Andy and his friends, but little do they know that Chucky is learning bad lessons from things he witnesses, together with a psychotic need to stay friends with Andy at all costs. And woe betides those who get in the way or upset Chucky’s new human pal.

I love how the film approaches the Child’s Play concept in a fresh way. Buddi dolls are a global phenomenon (much like the Buzz Lightyear action figure in the mid-1990s), but everyone’s itching to buy the new and improved ‘Buddi 2’ so owning the original is like having an outdated iPhone. Andy’s also a rebellious teenager in this remake, not a little six-year-old, so whatever pleasure owning a Buddi doll once held for a boy has long passed… which is why Andy and his friends find mischievous ways to play with Chucky and entertain themselves ironically with the stupid thing. They teach it how to play-act stabbing and watch The Texas Chain Saw Massacre 2 (1986) with Chucky nestled amongst them, unaware the toy’s silently deducing that their gasps and laughs are caused by scenes of grotesque bloodshed…

It’s also interesting that Andy’s home life involves a young and attractive mother trying to start a relationship with an abusive man Andy doesn’t get along with. It means that Chucky almost becomes a protective brother to Andy, albeit a sibling with zero morals and a level of intelligence nobody suspects. (And was it intentional Chucky even looks similar to Aubrey Plaza, his “mom”?)

Throughout the film, there aren’t very many kills, but the three or four it has are well-choreographed and imaginatively twisted. They certainly don’t hold back on the blood and gore, which horror fans will appreciate because a new Child’s Play could easily have been a 12-rated horror aimed at kids without any nasty content whatsoever. My favourite kill involved a hot pipe and a buzz saw, for what it’s worth.

Mark Hamill (Star Wars: The Last Jedi) voices Chucky and does a commendable job, although Brad Dourif was more entertaining because his Chucky was a foulmouthed grown-up trapped inside the plastic shell of a toddler-sized doll. The contrast was amusing. Hamill gets to be quieter and creepier and has more of an arc, but this new version of Chucky’s inherently more robotic and doesn’t hold one’s attention as readily.

I was also underwhelmed by the VFX used to bring Chucky to life, as it’s not as impressive as I was hoping for. There are a few standout moments augmented by CGI when Chucky’s walking around, which are cool to see, but not as many as I would have liked. And the design of the Buddi doll is fine but too cartoonish to be sinister.

Despite only clocking in at 90-minutes, the film starts to run out of steam in the second act, although the climax inside a big toy store on opening day for Buddi 2 does claw things back. Still, there’s more than enough to appreciate here considering how awful a remake of Child’s Play threatened to be. The performances are strong, and Gabriel Bateman is a child star who doesn’t grate and mostly behaves like a real kid would in these situations. The way Chucky can control other products from his manufacturers (aerial drones, TVs, driverless cars, smart home appliances) also gives the sinister doll an added level of power and threat. It was always a struggle to accept that a pint-sized doll would be a physical problem for any adult, but the script by Tyler Burton Smith gives Chucky a skillset that evens the odds.

The new Child’s Play is partly a cautionary tale about the perils of A.I, which is a valid way to approach this silly material and make it relevant and interesting for the Aibo robot dog generation. But you still get the core fun of a cute ginger doll stabbing people to death, so nobody can complain too much… although it’s easy to miss the outrageous personality of the original Chucky. 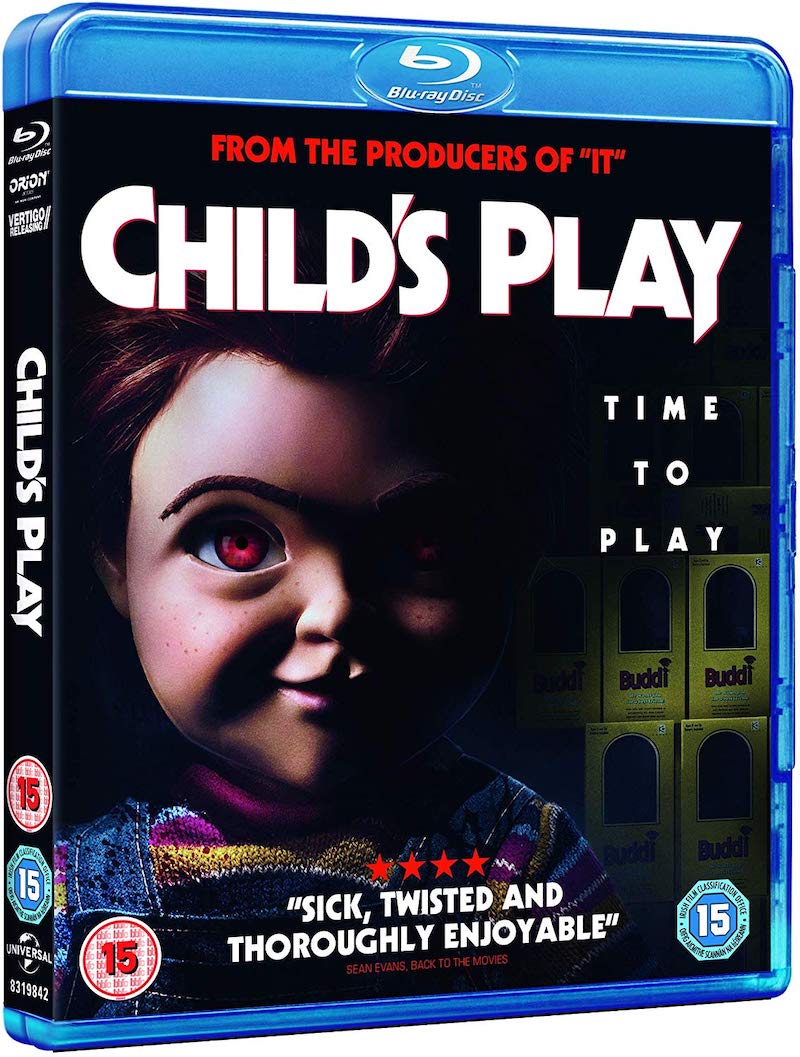 Lars Klevberg shot Child’s Play on the Arri Alexa Mini with Leica Summilux-C and Angenieux Optimo Lenses, using a 2.39:1 aspect ratio. It would thus have been possible to release a native 4K Ultra HD Blu-ray but, for whatever reason, we’re only getting a 1080p Blu-ray and standard definition DVD. The good news is this HD release certainly is no slouch, with particularly inky black levels and lots of details in the crisp image. I didn’t spot much compression artefacts or black crush, so it certainly gets a thumbs up.

The DTS-HD Master Audio 5.1 soundtrack is surprisingly good and atmospheric with good use of the channels, although sometimes the dialogue suffers in the centre speaker as a result. It’s a shame there’s no Dolby Atmos mix to give it some added oomph and height effects (for the drone attacks maybe?), but this is satisfying and immersive enough.