Humans themselves are frequently the architects of their own downfall in Black Mirror. It’s a simple message for the show, but one that tends to come with the bleak observation that we’re already too far along the path towards such an outcome. And that we’ll be unable or unwilling to reverse our fate. These issues are at the centre of “Hated in the Nation”, a socially relevant and powerful look at communication in the modern age. The way we rely on technology nowadays involves a relinquishment of control, and we can’t expect or predict the consequences that putting trust in our communication devices might have.

Alarmingly, “Hated in the Nation” takes place in a world not so different from our own. There are a few shinier pieces of technology, a wider adoption of smart home devices, and better smartphones, but it’s clear that writer Charlie Brooker has envisaged this as our near future. It’s set in a London we’d easily recognise, and a character mentioning that driverless cars haven’t gone “mainstream” yet hints that this perceptive tale takes place less than a half-century into the future.

Were it not for Bryce Dallas Howard’s lead role in “Nosedive“, Kelly Macdonald (Trainspotting, Boardwalk Empire) would likely be the biggest name to star in Black Mirror so far. She stars as DCI Karin Parke, an experienced and hardened city cop resistant to the cutting-edge technology that’s transforming the world. Teaming up with young cyber forensics expert Blue (Faye Marsay), the pair get tasked with investigating the murder of despised journalist Jo Powers (Elizabeth Berrington), a not-so-subtle equivalent of Katie Hopkins. After Jo receives death threats online, the police  find her gruesomely murdered in her own home. Parke suspects the husband, as it usually is, but Blue realises there might be something more sinister at play… 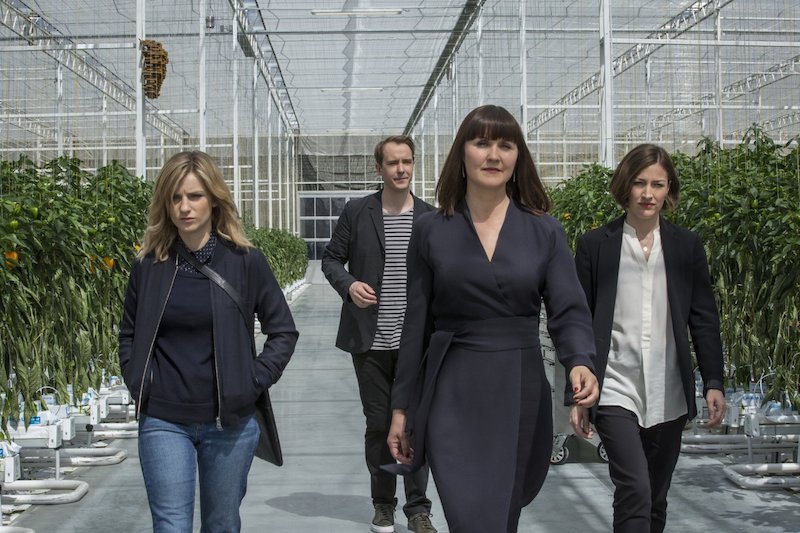 The Katie Hopkins connection isn’t the only thing echoing real life. It’s unsurprising to discover that Jon Ronson’s book, So You’ve Been Publicly Shamed, at least partially inspired this episode, which concerns public figures attracting the wrath of a hive of angry social media commentators. These figures include a loudmouth rapper who criticises the dance skills of a young fan, and an entitled politician behind disability cuts. A later example of a woman targeted for a moment of insensitive idiocy is eerily similar to the Justine Sacco incident, where Sacco was fired from her job while on a flight after having made an offensive joke before departing.

The unforeseen consequences of our actions, however small, are the focus of this gripping feature-length episode. “Hated in the Nation” is about how the internet disassociates us with the importance of the words we wield online. It’s about the power of social media, the impact of online shaming, and an outrage culture that’s become a runaway train of casual hate and fleeting anger. It seeks to remind us that real people are involved in these virtual interactions. That’s true whether they’re the ones sending hurtful messages without thinking about them, or on the receiving end.

This episode’s themes touch on the most pressing issues of the moment. A story about the fragility and significance of the online world is especially momentous at a time when a US presidential election has been substantially affected by social media and fake news; a time when large parts of the internet can be dismantled by massive attacks; and a time when trolling and online bullying is so pervasive that Twitter’s announcing increased measures to address the issue. Any story dealing with such themes is going to be about much more than just social media. It’s a connected web of issues. Unsurprisingly, this episode confronts topics like privacy, governmental oversight, freedom of speech, the Internet of Things, and our disconnection from reality.

As the episode’s mystery begins to unravel, we start to see how important to the story the introduction of ADIs (Autonomous Drone Insects) are. These tiny robots take the place of extinct bees, but have been reprogrammed to devastating effect. The fact that they’re also an environmental necessity shows just how dark Brooker’s view of this world is: the very things we need to survive become the things used against us. That these robots are also exploited due to a government backdoor ties this into yet another real world issue in the ongoing debate about privacy and safety when it comes to smartphones.

Like all the best episodes of Black Mirror, “Hated in the Nation” tells a sharp, focused, and thrilling story. With a longer running time of nearly 90-minutes, this isn’t merely a concept good enough to fuel a movie, it’s a tremendous piece of feature-length filmmaking in its own right. It’s structured like a police procedural, but the science fiction elements are a subtle and important part of the story. Its message is incredibly relevant, and it’s all about reminding us that those we might direct anger and hate at are still real people. It wouldn’t be Black Mirror without a bittersweet or just plain depressing conclusion, though. In the end, it almost feels like it’s telling us that humans can’t help but find satisfaction in some way by targeting others. There may eventually be an antagonist revealed in the narrative, but in that familiar Black Mirror way, it’s made all too clear that it’s all of us as humans that are the real villain of the story.

Written By
Simon Cocks
More from Simon Cocks
The drug war on the US-Mexico border has escalated as the cartels...
Read More