The fifth episode of Charlie Brooker’s Black Mirror takes us on a journey through a dystopian version of Call of Duty, by way of 1984. We see soldier “Stripe” (Malachi Kirby) undertaking his inaugural mission in the army, together with fierce female squaddie Raimond (Madeline Brewer), to fight the scourge of “roaches” (a disfigured, dehumanised enemy that arose after a biological attack).

Black Mirror’s penchant for exploring future technology again takes centre stage, as all the soldiers are equipped with a brain implant (known as “MASS”), which we learn controls their senses to guide their decision-making. It’s with this technology that the army has secretly perfected a method for ethnic cleansing, as MASS distorts perception of the enemy—turning them into monstrous zombies instead of the frightened humans they really are.

This is a haunting notion. The concept of trained killers is hard to grasp when the news is constantly showing images of distressed families caught up in war, so to have it taken one step further with Charlie Brooker suggesting how this brutal dehumanisation might progress is truly harrowing. We already know technology has changed the shape of many things (from consumption of media, to general commerce), but to imagine it controlling modern warfare is an idea to make you shiver. 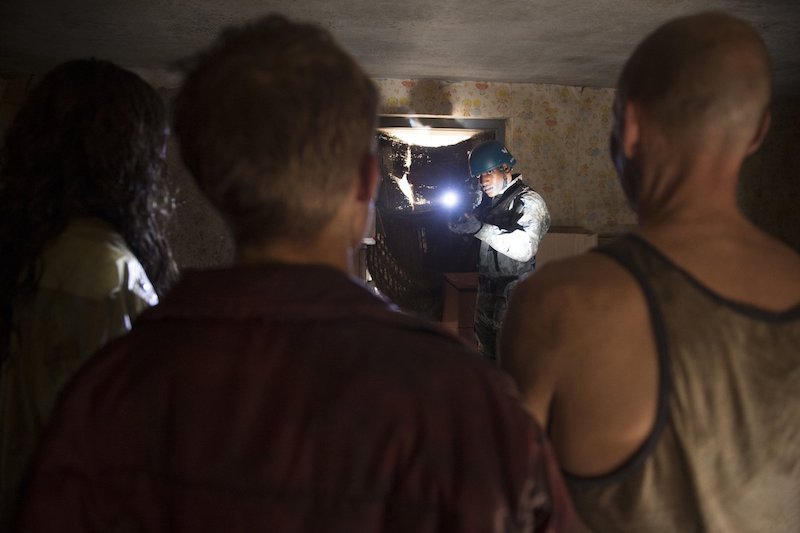 “Men Against Fire” also provides a different interpretation of the army to other TV shows currently airing, such as the BBC drama Our Girl. The heart of the army is gone. The idea that killing must serve a purpose is gone. It’s all turned into a video game, of the type teenagers will be unwrapping this Christmas for their Playstation or XBOX. Murder has been absolved and normalised, and it’s made all the worse when we learn Stripe voluntarily had his memory wiped to sign up for the army and its methodology. Somehow, the idea of somebody become submissive in this way is a very hard pill to swallow. It’s Black Mirror’s way of reiterating how society has become enslaved to technology and how far it could go if we are unable to grasp the reins.

After a series of tests on his implant and his physicality, Stripe is sent to Arquette (Michael Kelly) to talk through his first mission. Arquette asks Stripe how it felt when he chalked up his first kills to which he replies, “I didn’t”. It’s at this moment we realise the writers have been very clever. The script has incorporated another dimension to dehumanisation: stripping out emotion. When emotion is restore for Stripe toward the end of the episode, it’s harrowing, as he admits “they [the roaches] look just like us”, to which Arquette replies “of course they do, that’s what makes them so dangerous”. 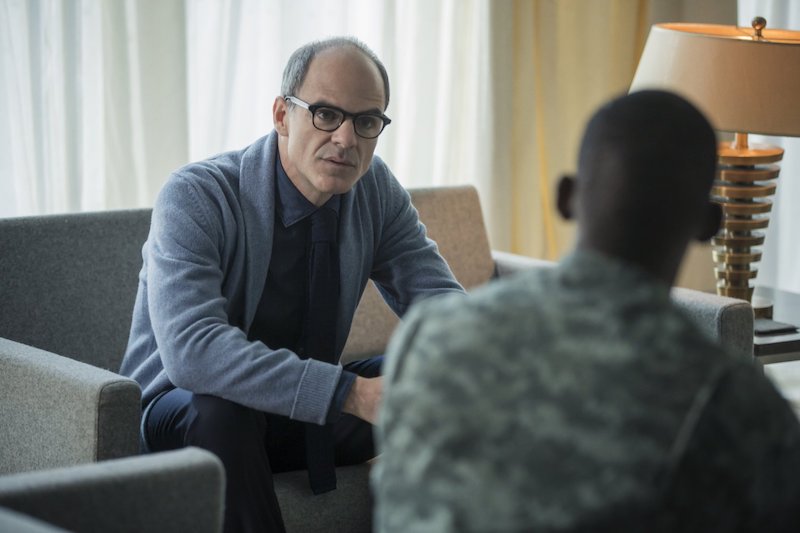 After seeing Arquette for the first time, Stripe is prescribed “a real good sleep”. It transpires that the doctor has the power to give Stripe a sexual dream, using his MASS implant (even though this glitches because of the implant’s malfunction). Regardless, here we see heteronormativity and the idea that a submissive and sexualised woman is the best kind of reward. A theme as disturbing as it is relevant: the idea that people can be coerced to do anything with the promise of incredible sex, to keep them submissive to a terrible regime.

One of Black Mirror’s strengths has always been, whether intentional or not, facing the prevailing issues in our society; of which attitudes towards women is one. Another? Choosing to turn a blind eye; to not see something we don’t want to see. However, the MASS device takes it one further, and we see an unsettling way of absolving wrongdoing.

After Rai murders the roaches, the scene then changes to Stripe locked in a cell and full of anger and frustration. Arquette gives Stripe a choice: either have his implant reset and go back to hunting the “roaches”, or live without it but relive the horrors of his actions as an eternal replay in his head. Unable to face the reality of his actions, Stripe chooses to have his memory erased and to help commit genocide.

In this very Orwellian episode, Black Mirror suggests that that the human mind will one day be subject to complete manipulation by the state, and fighting against the ‘thought police’ will be all but impossible.