My concerns about the imbalance of Better Call Saul was compounded by “Talk”, because Jimmy’s (Bob Odenkirk) storyline is by far the least interesting of the three in play, unless you count Kim’s (Rhea Seehorn) work ennui. I was worried this might happen without Jimmy’s brother around to keep things prickly, and after four episodes there’s little to suggest where season 4’s headed with Jimmy. We know where his character will end up, but until now that’s never felt like a problem, because the journey was so interesting to watch unfold. Please make it interesting again, soon… 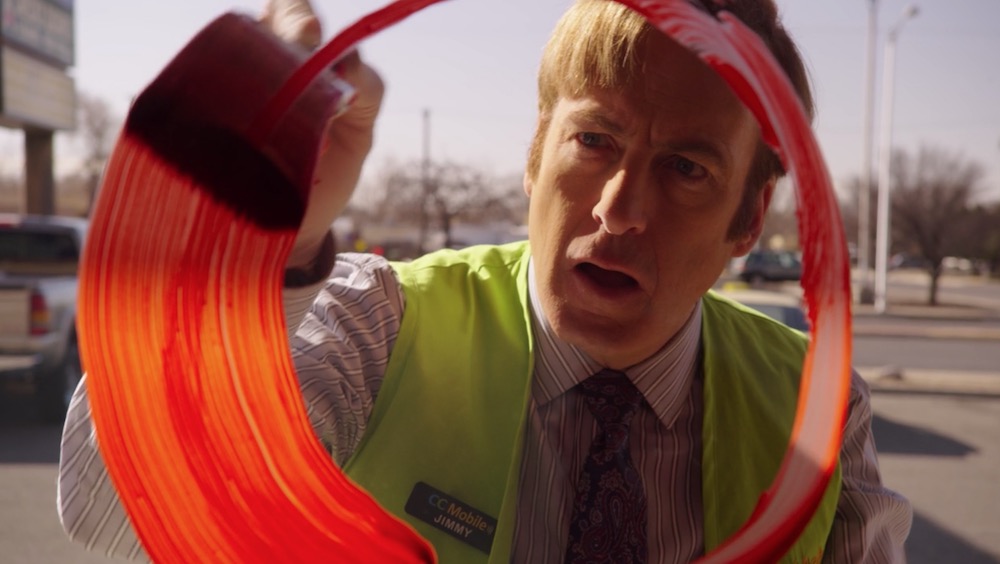 I appreciate Jimmy’s in a funk right now, refusing offers of work because the jobs are tedious and his heart’s calling him to the thrill of executing criminal schemes. Here, he reluctantly took a job as a mobile phone salesman, perhaps because Kim’s suggesting he see a psychiatrist to get over Chuck’s death, so anything’s better than that. Unfortunately, the CC Mobile shop’s in a part of town with little footfall and Jimmy’s immediately bored senseless as a shift manager (who was he even managing?), reduced to bouncing a ball against the front window to entertain himself. An obvious nod to Steve McQueen doing likewise with a baseball in The Great Escape (1963).

For Jimmy, his own escape was an ad hoc break to see hired thief Ira (Franc Ross), who’s sold the stolen ‘Bavarian Boy’ figurine for more than expected, and kindly decided not to cheat Jimmy out of the extra cash. It seem they’ve developed a mutual respect after their escapade last week, so Jimmy promises him more jobs in the future, and is inspired by Ira’s paranoia over mobiles to go back and paint “THE MAN LISTENING? PRIVACY SOLD HERE” on his shop’s glass windows. An enterprising way to turn the shop into a mecca for customers suspicious about spying, or will his bosses think that’s a step too far? 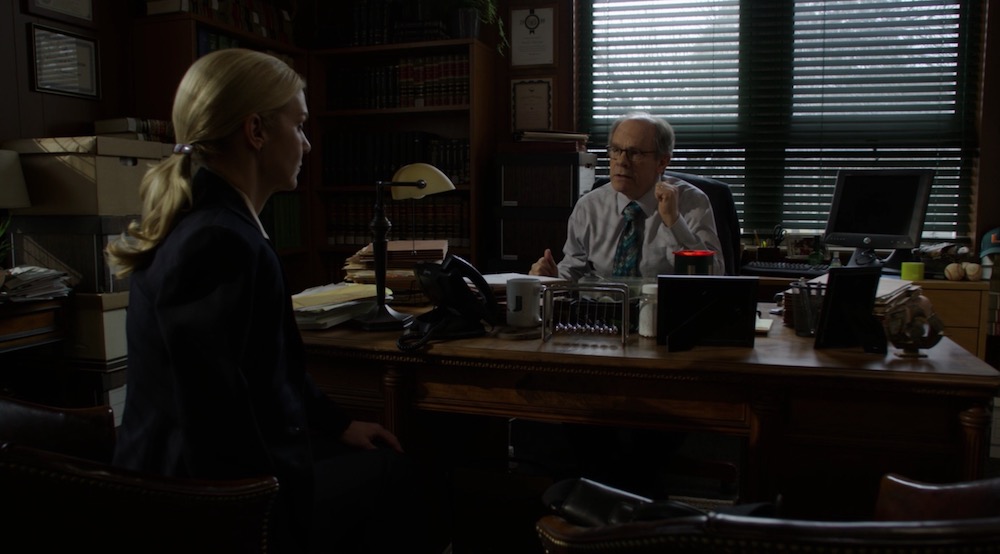 Court in the act.

Jimmy wasn’t the only one bored this week, as Kim’s likewise having difficulty getting herself motivated about being a lawyer. The Mesa Verde client was a big success that’s rapidly expanding, but her heart’s in watching a corporate monster grow and grow, so she instead spends the day watching Judge Munsinger (Ethan Phillips) go about his duties in a courtroom.

During a recess, Musinger spoke with Kim in his private chamber, and appears to have gotten the measure of her, cleverly making it clear the drama and excitement of practicing law is confined to the movies like The Verdict (1982). Most cases are tedious domestic affairs, and the experienced judge threatens to put her skills to use as a pro bono defence counsel unless she disappears. But after returning to court, Munsinger’s puzzled that Kim’s still defiantly in attendance. I’m guessing she wants the judge to carry out his half-serious threat, so she can get stuck into more ordinary cases and feel like she’s making a difference for the little man? 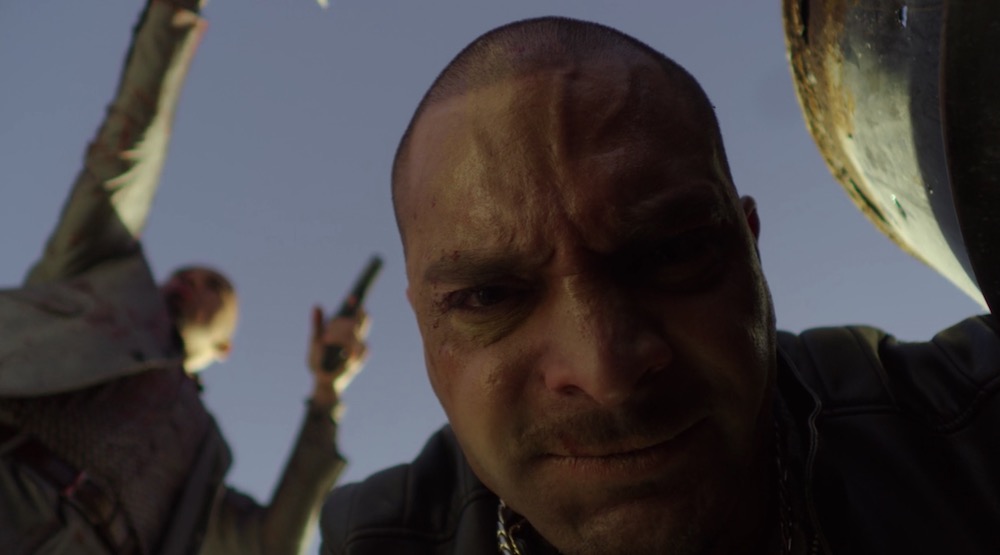 In the continuing downward spiral of Nacho (Michael Mando), Victor (Jeremiah Bitsui) sold the drugs taken from his wrecked car to the Salamanca’s rivals, the Espinosas. Later, Nacho identified one of the Espinosas as the guy who ran him off the road - which didn’t happen, of course, as it was just a way to coverup the fact Gus (Giancarlo Esposito) asphyxiated Arturo to scare Nacho into becoming his double agent.

So, the Cousins (Daniel and Luis Moncada) lived up their fearsome reputations by walking into the fortified Espinosa compound by themselves, with no plan, to steal back their “stolen” drugs. Nacho, watching from a car outside, eventually helped them out, despite his injuries, unable to watch them get slaughtered. Which speaks well of his character. Or maybe he just didn’t want to tell Don Hector two of his relatives died trying to retrieve drugs he lost?

The only downside of the Cousins’ crazy plan is that their hit was so high-profile we later hear they’ve been forced to head back to Mexico until the heat dies down. I guess that’s the last we’ll be seeing of them this season, and chronologically they’re next seen crawling on their bellies in the premiere of Breaking Bad season 3?

Later, Nacho realises the whole thing’s been part of Gus’s masterplan. The Salamanca cousins have now wiped out the Espinosas for him and opened up more turf for Gus to sell his own drugs, and have scurried back to Mexico out of the way. In poor health because of his decision to help the Cousins despite his gunshot wound, Nacho then seeks refuge at his father’s closed shop to recover, his condition making it very clear he’s in over his head. 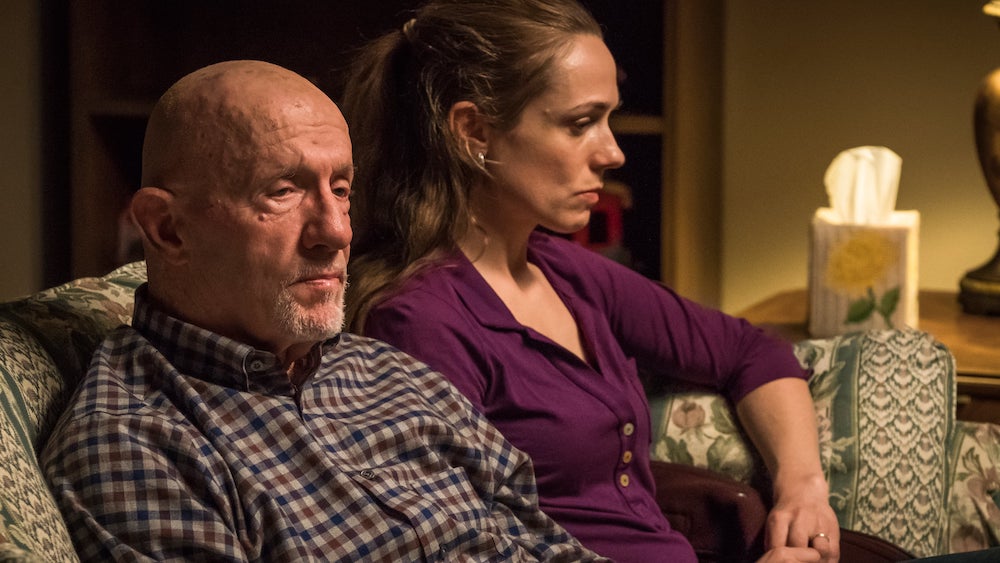 It took me awhile to remember who Mike (Jonathan Banks) was talking to in the diner over his crossword, but it’s Anita (Tamara Tunie), the woman he formed a bond with last season. But the meat of this week’s story for Mike, who got the best character progression, was his attendance of a bereavement support group with daughter-in-law Stacey (Kerry Condon). Of course, Mike mostly just sits in silence, containing his emotions as Stacey talks about her dead husband, his beloved son Matty. (The episode’s opening scene with the kid writing ‘MATTY’ inside some freshly poured concrete confused me, but we eventually realise the boy was Mike’s kid.)

The support group delivered a great performance from Banks, as always, with Mike struggling to keep his emotions in check as Stacey opened her heart to the group. But his real concern was in confronting “grief tourist” Henry (Marc Evan Jackson), who’s been part of the group’s weekly meetings for awhile now but whose “dead wife” never existed. 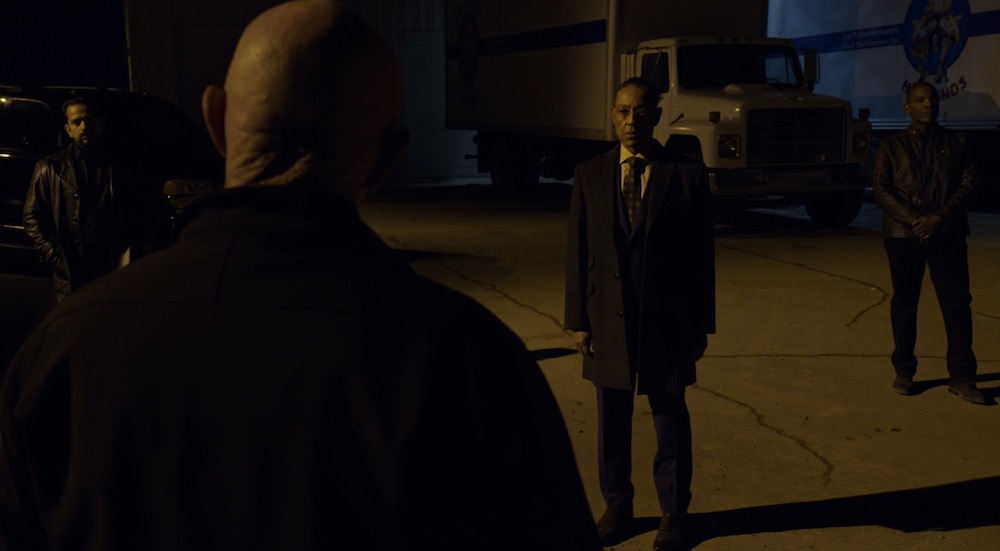 It was a darkly amusing moment when taciturn Mike finally broke his silence, exposing Henry’s lies to everyone, forcing him to leave the house in embarrassment. But while it’s in Mike’s nature to do something like this as a no-nonsense lawman, however abruptly, it didn’t help that he capped it off by criticising the purpose of the group - claiming they wallowing in each other’s grief, so were unable to spot the inconsistencies in Henry’s tragic story. Mike probably won’t be asked back alongside Stacey, and it’ll be interesting to see if any of this puts a strain on his relationship with his daughter-in-law. Mike may think these groups are pointless exercises, but Stacey probably doesn’t and thought they were both getting something out of it.

Finally, Mike was summoned to see Gus in a suitably unsettling nighttime location. But it didn’t phase the dependably unflappable Mike, who brushes aside Gus’s anger that he knew about Nacho’s intention to kill Hector Salamanca and didn’t tell him. Mike, of course, has a rational explanation: he only promises not to kill Hector himself, not be his bodyguard. More importantly, he’s experience enough to know that what Gus really wants is to offer him another job. And considering he’s rubbing Madrigal staff up the wrong way with his inspections, outstayed his welcome at the bereavement group, and disappointed Anita with his handling of Henry, a “job” is probably something Mike has time for now. But what does Gus have in store for him? Might it be taking out Nacho, who’s proving himself a liability? Is that something Mike could go through with, as they always seemed to get along quite well?