For more than half a century Jim Henson’s name has been synonymous with puppets. He brought young children Sesame Street, older kids Labyrinth (1986) and The Dark Crystal (1982), and even worked as a puppeteer on the original Star Wars (1977) trilogy. His son, Brian, spent most of his life in the Henson Workshop alongside his father, creating foam characters for himself. Then, following Jim Henson’s untimely death in 1990, Brian continued the family tradition by directing family favourites like A Muppets Christmas Carol (1992) and Muppets Treasure Island (1996).

Now, after a 10-year hiatus, Brian Henson returns with the first movie from the adult-comedy division of his father’s original company, Henson Alternative. The Happytime Murders has spent a decade in development, once with stars such as Cameron Diaz and Jamie Foxx attached. The idea falls somewhere between Who Framed Roger Rabbit (1988) and Team America: World Police (2004), as these puppets are certainly not the child-friendly muppets generations of kids grew up with. As the infamous tagline reads, it’s “No Sesame. All Street.” 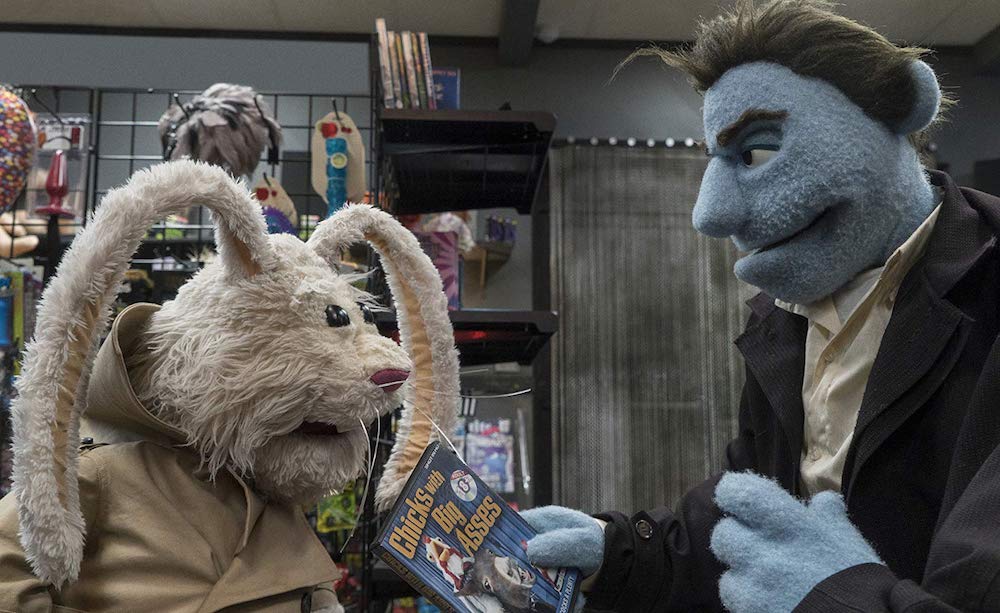 In a world where puppets exist alongside humans, but as second class citizens, Phil Phillips (Bill Berretta) is private detective working in Los Angeles after being fires from the LAPD in disgrace. Now dwn on his luck, Phil accepts a case from a femme fatale (Dorien Davies) that seems like a simple blackmail plot, but finds himself drawn into a string of murders connected to 1990s children’s TV show “The Happytime Gang”. When two stars of the show become the next targets, including his brother Larry and his former flame Jenny (Elizabeth Banks), Phil resolves to find the serial killer. However, solving this case is going to take tough fluff, as well as discipline, so he’s reunited with estranged former partner Detective Connie Edwards (Melissa McCarthy) to crack ‘The Happytime Murders’.

It’s easy to see why Melissa McCarthy (Spy) was cast as Connie: she can do the potty-mouthed cop schtick in her sleep. Although playing a character we’ve seen her inhabit numerous times before, McCarthy does a good job and commits to the debauched material with gusto. Bill Barretta (The Muppets) does a good job voicing and puppeteering Phil Phillips, making his character a sort of foul-mouthed Humphrey Bogart mixed with Robert Mitchum. Thanks to the expertise of Barretta’s puppetry, one quickly forget half this duo is just a hand in a sock.

However, the standout performance belongs to Phil’s lovelorn secretary Bubbles (Bridesmaids’ Maya Rudolph). She’s incredibly charming as a woman almost lifted from a 1950’s sitcom, and thanks to years of experience on Saturday Night Live Rudolph can turn a laugh with whatever material gets thrown her way. 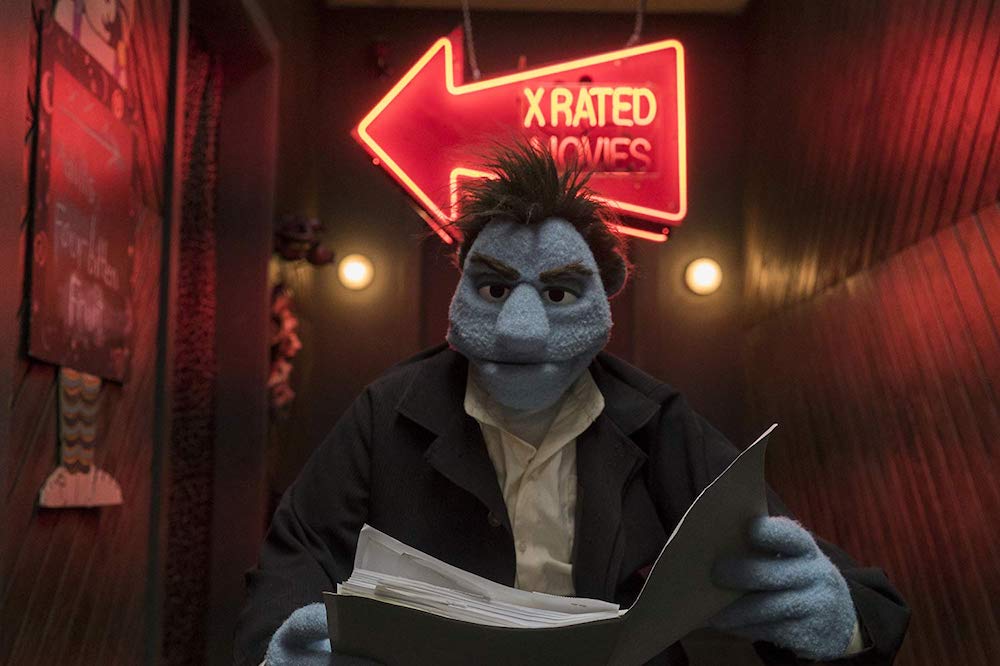 The appeal of The Happytime Murders rests on ridding one part of our childhood entertainment of its innocence. Brian Henson seems the perfect candidate to deliver on this crazy idea, and he essentially slathers a layer of grime onto the colourful Toon Town from Who Framed Rodger Rabbit, turning into a cesspool of indecency and perversion. Much like classic Muppet movies, the distinctive world that surrounds our characters is completely immersive. With a clever use of camera angles and digital F/X, you believe this shared world between humans and puppets could actually work. Watching the two “species” interact, so effortlessly, is a testament to not only the actors but the unseen puppeteers. Henson orchestrates numerous puppet-orientated gags to perfection, and although they don’t have the same raunch as Peter Jackson’s Meet The Feebles (1989) he maintain a good pace for an entertaining 90-minute comedy.

Todd Berger’s script is a satire of film noir and 1980s buddy cop movies, but it only occasionally delivers some genuinely hilarious dialogue and moments. The plot is simple but never becomes the movie’s focus, as Henson’s too busy setting up a bawdy sequence involving a muppet ejaculating silly string. Beyond sight gags and gimmicks, the story too often relies on repetitive sexual jokes and dropping unnecessary f-bombs. 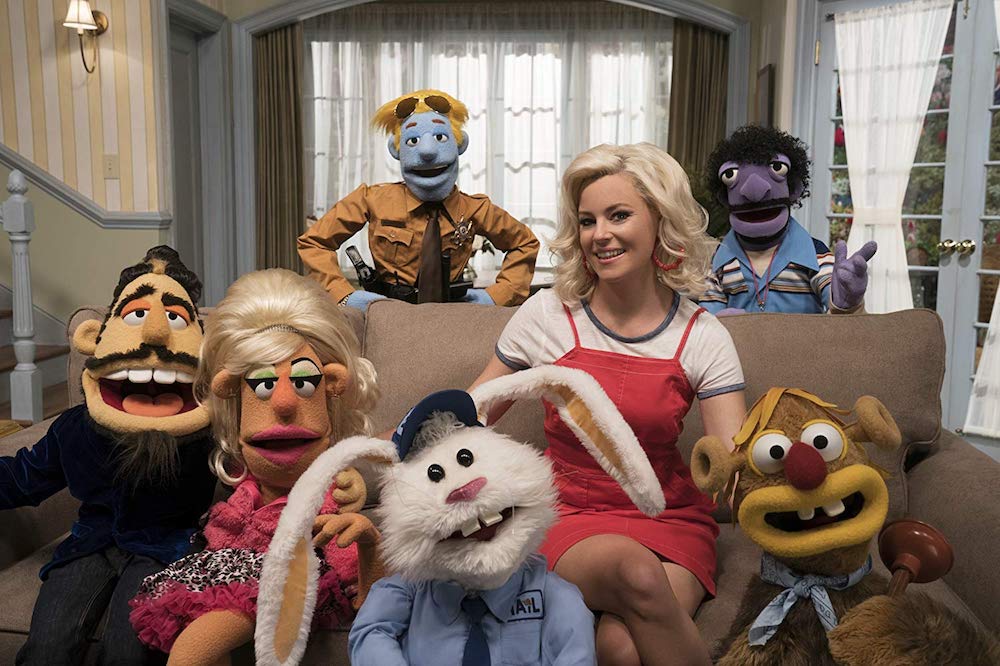 The crude humour eventually becomes incredibly tiresome. In its attempt to push the envelope with extreme moments, they begin to feel familiar, and certainly don’t hold the same shock value as films that got their first, like Team America: World Police or adult animation Sausage Party (2016). If Berger and Henson focused more on developing a darker narrative, maybe emphasising the racist undertones of puppets that don’t have equal opportunities, or focused on the satire of the buddy cop dynamic, The Happytime Murders might have developed more depth. Instead, it comes across as a misguided mess, never really knowing what kind of movie it wants to be.

The Happytime Murders is a mature twist on childish fare and Henson create a believably seedy environment very well, while the likeable cast are pretty good, and there’s impressive puppeteering that brings this world to life. It’s a naughty puppet show many will guiltily enjoy. However, the underdeveloped plot means it’s unsure where it wants to take the audience, so starts relying on gross-out gags and the sheer novelty of ‘X-Rated Muppets’… and that’s simply not enough.