If Jimmy’s (Bob Odenkirk) half of the show isn’t your favourite, which is something of a problem for a show that’s ostensibly about his backstory, chances are “Sabrosito” worked very well for you. Half the hour was taken up by Gustavo Fring (Giancarlo Esposito), shedding light on the bad blood between him and Hector Salamanca (Mark Margolis). We knew in Breaking Bad that they were rivals and didn’t like each other, and our assumptions about why aren’t wrong, but it was still great to see their mutual dislike for each other explored more.

The cold open was also a highlight for Breaking Bad fans, as it brought back Don Eladio Vuente (Steven Bauer), head of the drug cartel in Ciudad Juárez across the Mexican border. He was again hanging out at his luxury villa, taking a dip in the pool, and going through the “tributes” brought to him from his “norther business”. Hector, there in person, gave him a comical ice cream mascot of ‘The Winking Greek’, inspired by his image, together with a duffel bag full of rolled bank notes. It was a somewhat typical scene, with Eladio posturing and frightening the people around him with comments they’re not sure how to take, but nevertheless very watchable. Hector may have been intimidated, but he never showed it, and ultimately came to instead feel anger and jealousy towards Gus — whose own tribute, a Los Pollos Hermanos T-shirt, went down a lot better. It also helped that fastidious Gus had taken the trouble to shrink-wrap his own bank notes into heavy blocks. It’s all about the presentation. 1–0 to Gus. 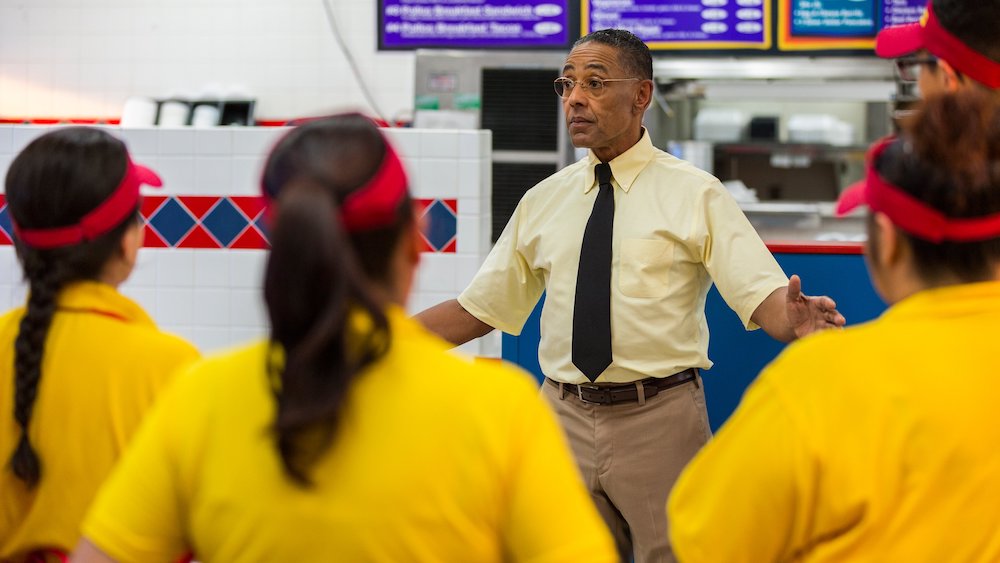 Embarrassing Hector, even in his absence, led to the episode’s best scene, when Hector and some of his cronies entered Los Pollos Hermanos to intimidate the staff, including assistant manager Lyle (Harrison Thomas), in an effort to scare Gus back to the premises. It was a very tense scene, and slightly unexpected, as I’ve always presumed the fast-food restaurant had been completely separated from the drug-trafficking that’s happening. But, as it turns out, there was this one terrifying incident that Gus had to explain away. Hector’s “revenge” was to try and get Gus to transport his own drugs across the border, now that the police have closed off his main smuggling route, which would place an unreasonable burden on Gus’s own operation.

I also loved how Hector delivered the message, sucking on a big cigar in Gus’s office, with his feet up on the desk, picking some grime off his sole with a letter opener. The next day, Gus’s explanation to his staff for the frightening ordeal they wall went through, seemed to work very well. He explained it away as an old enemy from overseas, trying to extort cash from him once again, then turned it into a patriotic “not in America” speech that got everyone on his side against the bullies he bravely sent packing.

Of course, we kind of know where this is headed. Hector in Breaking Bad is a paraplegic man who can only communicate by ringing a bell, so Gus must eventually get his revenge by putting him into that state. We always knew this, but it looks like Better Call Saul will explain exactly how — and judging from the scene where Gus went to make Mike (Jonathan Banks) an offer to join his operation, it’s going to involve the skill-set of Mr. Ehrmantraut, who also detests the Salamanca family. I can’t wait to see how it all plays out, leaving Gus as Albuquerque’s top dog. 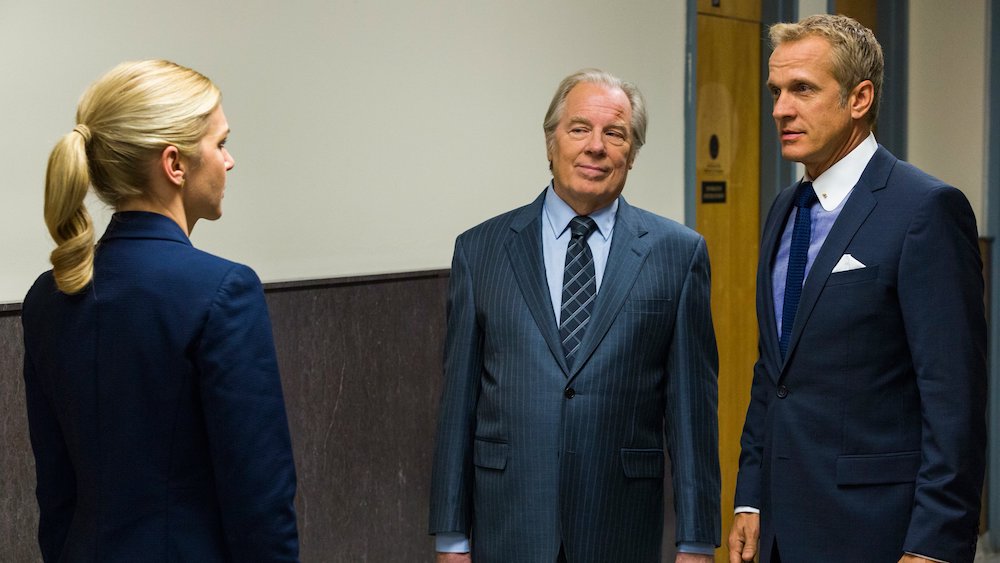 Jimmy’s story again wasn’t the best, but it tends to work better when there’s an air of mystery about everything happening. There’s still a court case brewing between Jimmy and his brother Chuck (Michael McKean), which will likely end with Jimmy losing his career as a lawyer, but rather like Gus he has a plan of action that involved Mike. We just don’t know what that plan is. Mike was sent to Chuck’s house to repair his broken door, in the guise of the handyman that had been called, then proceeded to take photographs of Chuck’s house that he later handed over to Jimmy in a diner. What was Mike doing exactly? Why will these photos help? It’s unclear.

But we do know that Kim’s (Rhea Seehorn) involved, as she got confirmation from Chuck after their disciplinary hearing that a copy of Jimmy’s confession tape definitely exists. That sounds like bad news, but both she and Jimmy seemed happy as they left the meeting together. Again, it’s unclear what’s afoot, but I rather like that. It’s also fun that Kim’s willing to play dirty, to save Jimmy at least, because she could have been written a very different way. But it’s always been clear that, while she’s a straighter arrow than Jimmy, she has a knack for being underhanded and isn’t going to just wash her hands of Jimmy when the going gets tough. I look forward to seeing how they defeat Chuck in court.

Above all, “Sabrosito” was a great chance to highlight some of Better Call Saul’s great duos. Hector and Gus make for excellent enemies, we had Mike and Jimmy working together again (they seem to just owe each other favours, with the next one due from Jimmy), there were flashes of the upbeat can-do spirit between Kim and Jimmy, and we even got a very rare moment with Chuck and Mike sharing the screen. And it seems another intriguing duo’s about to be formed, once Mike decides to keep financing his little granddaughter’s lifestyle by earning money from a big player like Gus.