The Fast & Furious franchise gets so much right that it’s easy to ignore the things that are less appealing about it. It is sometimes morally questionable/reckless and each film seems to need to feature at least three scenes of scantily-clad/objectified women. But it’s also a oddly touching series about family and loyalty, and it’s essentially too damn entertaining to write off. Furious 7 delivers again, with big thrills and exciting action… and it is a tasteful and meaningful farewell to Paul Walker (who tragically died before the film finished filming).

Picking up straight after the events of Fast & Furious 6 (and, perhaps confusingly, Tokyo Drift), this film shows what happens when the brother of Owen Shaw (Luke Evans) decides he’s out for revenge on the team that hospitalised him. That brother is played by Jason Statham, who is all imposing machismo (so, exactly like Vin Diesel and Dwayne Johnson) and snarling ferocity in this film. His outsized reaction to his brother’s defeat and his crazed revenge mission may not logically make as much sense as it should, but if you’re on board from that outrageous first scene–and if you’ve gone along with everything else that’s happened so far–there’s a lot of fun to be had here. And as with so many crowd-pleasing films that work this successfully, Furious 7 builds everything into character.

Using the premise as a springboard to explore character motivations and past behaviours, it becomes a necessarily contemplative look back at what this series has been about. Unsurprisingly, its main theme is simple and can be summed up in that one word you’ll hear so often when talking about Fast & Furious–“family”. It helps that the idea of loyalty within this group has been there since the first film, and it has been paying off since Justin Lin took over the franchise. Here, new franchise director James Wan takes those ideas and keeps them running strong, not needing to add complexity but using the broad notion to produce emotionally powerful moments. As far as the main character material goes, what we get here is demonstrative of the patience of the franchise. Weaker serialised narratives would’ve abandoned the amnesia experienced by Letty and found a way to return her to her previous dynamic with Dom. But Furious 7 finds ways to examine the personal consequences of her pain and uncertainty without ever turning Dom into somebody who forces her to be somebody she’s not before she’s ready. 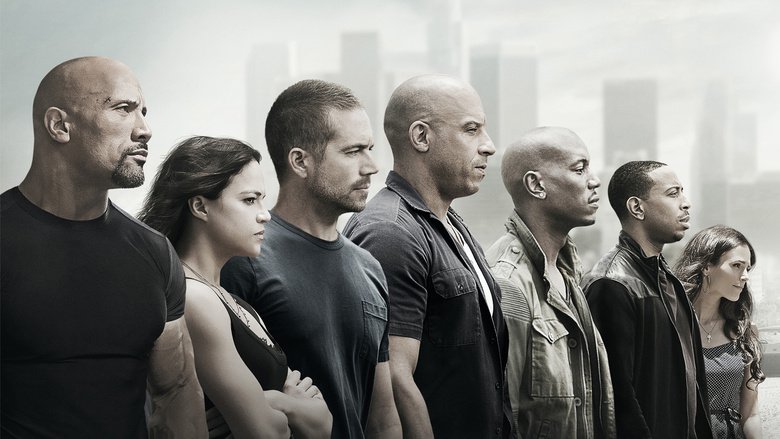 It’s solid stuff, and the slow build works because the climax hits almost every beat it should. While this is a film that doesn’t exactly do subtlety–my favourite quotes from Dom are all about laying the themes out as obviously as possible, like “I don’t have friends, I got family” and, “This time it ain’t just about being fast” (it’s about being furious too, get it?)–it does have a surprisingly sensitive side as it deals with the loss of Walker and the journey of his character Brian. At this time, it makes sense for Brian to be leaving the team, because he has a family of his own. Ultimately, Furious 7 is a hugely convincing tribute to Walker. If you are able to truly hold it together when hearing his close friend Diesel say “You’ll always be my brother” as the film comes to an end, then I’d be surprised. There’s more to mention that works here. Statham makes a convincing villain, Game of Thrones‘ Nathalie Emmanuel turns up as a gifted hacker and Kurt Russell is a bit of a scene-stealer as a shadowy government agent (the character is called, no joke, Mr Nobody).

The reappearances of other members of the team work well too, especially when it comes to Johnson’s Hobbs and Ludacris’s Tej. Without Sung Kang as Han, though, it does feel a little like Roman (Tyrese Gibson) is lacking a character to bounce off of. It’s also worth noting how the action in the film is delivered. Our heroes show more appreciation for saving innocent lives than those in the average superhero movie do these days. Reckless slaughter has been reduced after the tank antics in the previous film, and it becomes easier to root for a group of heroes that are out to save lives and put dangerous people in jail rather than just killing all of their enemies. Even with reduced violence, the film still constructs some amazing practical stunts and captivating scenes of stunning visual effects. Of course the rules of physics are bent way out of shape, but that’s a big part of what makes this wild ride such fun. Even more so than any other recent release, Furious 7 marks the beginning of summer blockbuster season. Yes, in April… we should probably drop the “summer” from the whole notion of the blockbuster season. Big movies are here already, and this film shows us that what is essentially the most successful superhero franchise not based on a comic book is still going strong.

The death of Paul Walker is tragic, and the film finds ways to remember his life and his character in remarkably beautiful ways. It’s strikingly heartfelt, and it sits within a movie that is seriously exciting and fun. At the end, one character remarks on how different whatever’s next is going to be. It’s hard to avoid how sad it is to recognise that everyone working on this film lost a friend and that the series lost one of its most important figures. And while what’s next will be different, it could still honour the spirit of what Walker helped build, and I’m certainly intrigued to see what an eighth film could look like.