While The Hateful Eight has proven to be a divisive movie, even many of its critics have praised Quentin Tarantino for working to keep film alive with the movie’s 70mm release (the widest of its kind, in the U.S, since 1992’s Far and Away). Seen in a proper movie palace, complete with overture and intermission, the ‘Roadshow’ version of The Hateful Eight is a grand moviegoing experience, and a reminder that film has a vibrancy and texture that digital projection, as much as it’s improved, still can’t match. As much as I admire Tarantino’s commitment to film, I especially enjoy the perversity of his shooting this particular movie in a format that, in its heyday, was mostly used for historical epics, grand musicals, and other big-budget spectacles.

I’m not talking about the complaint that Tarantino used 70mm for a movie that’s mostly interiors; the format is useful for more than just landscapes—and, besides, two reels of the film pass before the story moves inside, far more than the “five minutes” some reviewers have claimed. No, I’m referring to the contrast between what is, in 2015, a deeply romantic approach to shooting and exhibiting a new movie, and the film itself, with is decidedly unromantic. 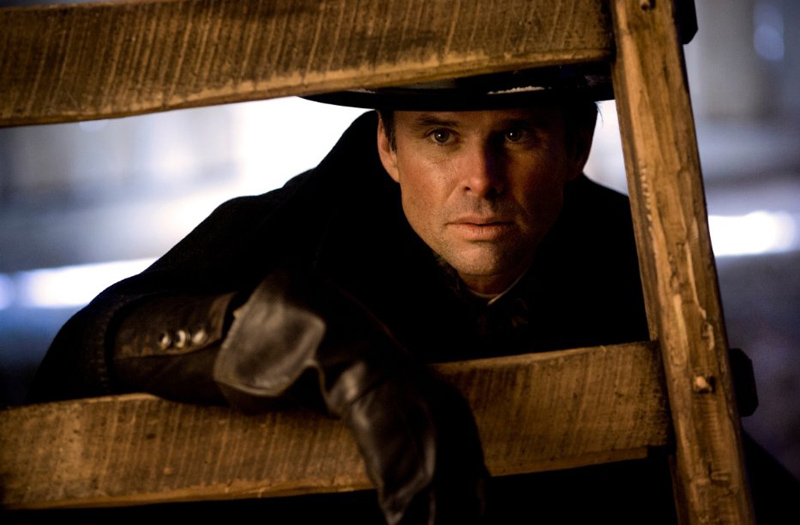 A violent chamber piece that plays, at times, like a horror movie, The Hateful Eight owes more to The Thing and The Last House on the Left (both of which are included in the soundtrack) than Khartoum, Ben-Hur, or any of the other 70mm films Tarantino’s mentioned in interviews. The Hateful Eight is a bleak, grisly experience with a blunt political subtext (unusual for Tarantino). It’s not the movie I expected, and I’ll be processing how I feel about it for some time, but as I think about how 70mm really brought out the flecks of brain matter stuck in one character’s hair, I can’t help admiring The Hateful Eight as a three-hour sick joke.

Romantic notions of the past are at the center of The Hateful Eight; most explicitly in the form of a letter written by Abraham Lincoln to former Union soldier and bounty hunter Major Marquis Warren (Samuel L. Jackson). When Warren crosses paths with fellow bounty hunter John ‘The Hangman’ Ruth (Kurt Russell), who Warren met some time before, Ruth is nearly moved to tears by Lincoln’s letter, which casts a shadow over the entire film. Set an unspecified amount of time after the end of the American Civil War, The Hateful Eight snows in Warren, Ruth and his prisoner—murderess Daisy Domergue (Jennifer Jason Leigh)—at Minnie’s Haberdashery, with a cast of supporting characters who, as is often the case in these kinds of stories, may not be what they seem: including Confederate General Sandy Smithers (Bruce Dern) and Chris Mannix (Walton Goggins), a former Southern renegade who claims to be the new sheriff of Red Rock. While Django Unchained ends like a superhero origin story, with Django and his rescued bride riding off into the night, The Hateful Eight takes place in an America where the war’s end has only served to further divide its people (and, the movie none-too-subtly suggests, little has changed today).

Much of the movie’s first act plays like a feature-length version of the protracted suspense sequences in Inglorious Basterds and Django Unchained; Tarantino is clearly having a blast teasing out the point at which the tension between his characters, particularly the racial animosity aimed at Warren, boils over. Tarantino deliberately invokes the tense, claustrophobic setup of Reservoir Dogs, and while this sometimes made me miss the relative economy of his debut movie, The Hateful Eight’s inevitable eruptions of violence are ugly and brutal in a way that feel more closely tied to Reservoir Dogs than the hyper-stylised violence in his more recent work. Not that either approach is necessarily better or worse, but if Tarantino were to quit at eight features rather than ten, the two movies would make fitting bookends to his filmography. 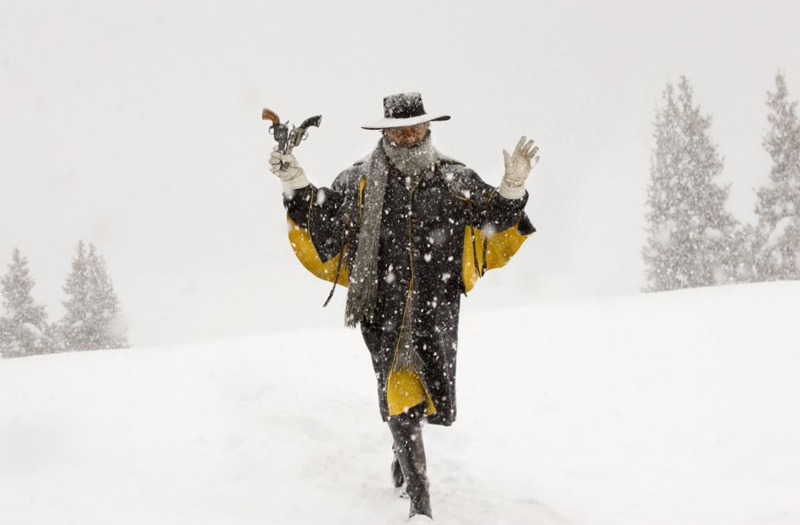 In a movie with no characters who are easily likeable, Russell and Jackson anchor the story, giving their hired killers a twisted integrity. And it’s a pleasure to see Jennifer Jason Leigh back in a meaty role; Daisy is a vile creation, and Leigh plays her with hilariously nasty commitment. The entire ensemble plays off each other beautifully, particularly in the first act, which also features some of Tarantino’s strongest direction. Those critics who claim that 70mm is wasted on interiors should take another look at how Tarantino uses the ultra-wide frame to choreograph parallel narratives unfolding in the foreground and background of nearly every shot. It’s when the precision of the first act gave way to the second half’s inevitable bloodbath that the movie lost me a bit. While I was still having a great time—I can’t think of another movie that made me exclaim profanities aloud more than once—I realised that The Hateful Eight lacks the sort of exhilarating moments I’ve found in most of Tarantino’s films. As I’m sure Tarantino could have gone for that effect if he wanted, I assume that this is deliberate; as the movie is largely about America’s long, evil legacy of racism and intolerance, it’s fitting that I felt more drained than excited by the movie’s end.

Admittedly, Tarantino’s message is sometimes muddied by his more puerile tendencies—for instance, while the idea that Tarantino is a misogynist makes no sense when you consider the many strong female characters he’s written, I can’t blame anyone who gets tired of seeing Leigh’s character repeatedly abused by the mostly male ensemble. And in other ways, the film’s structure is uncharacteristically clunky for Tarantino, particularly when he relies on narration (which he delivers himself) for a post-intermission reveal that surely could’ve been conveyed more elegantly. However, while these issues amount to more than just nitpicking, that I was fully absorbed by The Hateful Eight for three hours anyway confirms for me that, at this point, Tarantino is pretty much incapable of making an uninteresting movie. I expect to be wrestling with The Hateful Eight for a long time to come, but I’m looking forward to it.

Written By
Andrew Bemis
More from Andrew Bemis
I skipped American Horror Story’s first season at the time because it looked...
Read More