It’s the beginning of the end for HBO’s all-conquering fantasy Game of Thrones, which begins a bisected final season, with just 7 episodes this year and the remainder following in 2018. It’s also been longer than usual since the last instalment aired, and yet at the same time it feels like only yesterday. “Dragonstone” wasn’t the most explosive of premieres, but it served as a nice way of re-introducing the key players and where things stand between each dynasty. The storyline’s become rather complex over the years. Let’s recap what happened, and where things might be headed…

One of the episode’s best moments came early, in a cold open set during a banquet for the men of House Frey, hosted by the despicable Walder (David Bradley). As someone who doesn’t rewatch much TV, or remind myself of what happened in preceding episodes, it took me a minute to recall that Walder had been murdered by Arya Stark (Maisie Williams) in season 6’s finale, but that didn’t spoil the surprise. I thought we must be watching a flashback, until some of Walder’s dialogue made me think otherwise… and then the penny dropped. It wasn’t Walder, it was Arya in disguise, completing her vengeance by poisoning everyone involved in the notorious murder of her brother, mother, sister-in-law, and unborn nibling. It certainly put that storyline behind Arya, as she instead focused on a journey south, with Queen Cersei (Lena Headey) next on her kill list.

Along the way, there was a more lighthearted sequence with Arya coming across a group of Lannister soldiers headed to the Twins, sent after hearing what happened to the House of Frey. Rather strangely, the men included Thomas Turgoose (This is England) and pop star Ed Sheeran. It carried the unfortunate whiff of only existing to showcase Ed Sheeran’s cameo, as the modern-day equivalent of Boy George appearing on The A-Team. And yet, I thought the scene worked fine. It was perhaps deceptively useful, in giving Arya arguably her first normal interaction in years, with people her own age. It might also be foreshadowing the kind of future Westeros could have with more reasonable people in charge. These were “enemy soldiers” Arya was eating and laughing with, but she saw them as ordinary folk just trying to get by in this cutthroat world. I have a theory that Game of Thrones will end on a note not unlike the Dark Ages giving way to a kind of Renaissance period… 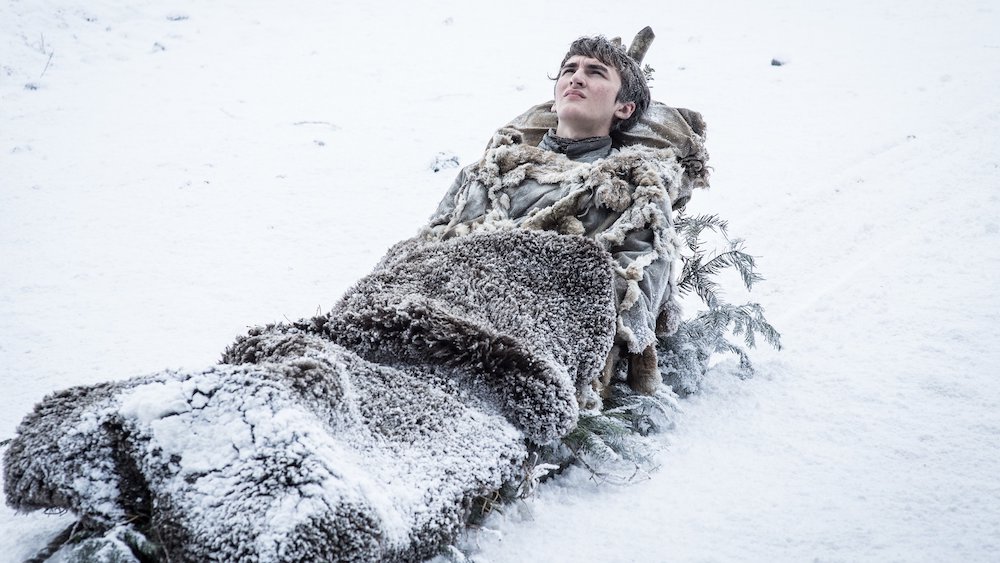 Of the many scenes that existed merely to setup things for later, this was the most conspicuous, with Bran (Isaac Hempstead) and Meera Reed (Ellie Kendrick) arriving at the mighty Wall and being let through by Eddison Tollett (Ben Crompton) and fellow men of the Night’s Watch. Bran’s having visions of the White Walker army advancing their way, very creepily, and it’s clear that Edd both accepts Bran’s a missing Stark and that an army of the undead are a threat this lame teenager could maybe help them with. 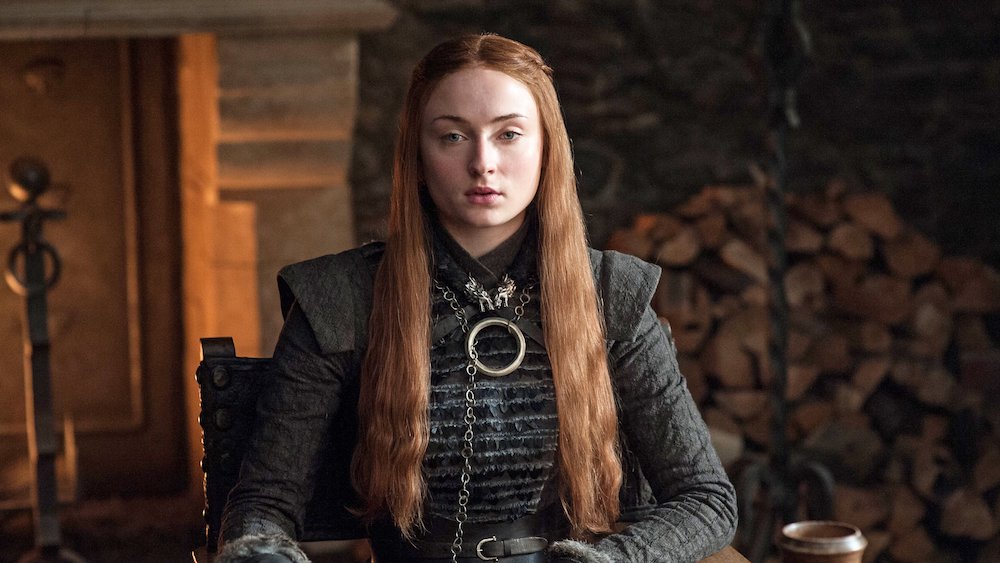 The rousing success at the end of season 6 was Jon Snow (Kit Harington) defeating Ramsay Bolton to take back Winterfell, the Stark family’s ancestral home. He’s now the undisputed ‘King in the North’, and we’re given a continuation of the scene where Jon’s giving orders to the lords of the North and trying to prepare everyone for battle now “winter has come”. But there’s the suggestion that Jon’s way of doing things doesn’t sit well with his half-sister Sansa (Sophie Turner), who’s quick to praise Jon’s innate air of authority and the well-earned respect he commands, but she had to bite her tongue when she disagreed with how he dealt with the Karstark’s (who sided with House Bolton)…

Sansa wanted to punish them for treason, by taking away their castles and gifting them to men who fought in the Stark name, but Jon can’t bring himself to end centuries of history in one fell swoop. For now, the Stark siblings can discuss their disagreements quietly in private, but it seems Littlefinger (Aiden Gillen) has noticed how Sansa’s being asked to play second fiddle, and that she may not like it. Jon’s role in “The Battle of the Bastards” was crucial, but it was Sansa whose actions enabled an unlikely victory, and yet nobody’s giving her the same level of respect and gratitude.

I’ve heard rumours that the presumably solid Stark siblings are going to be torn apart, as their disagreements mount up, so it’ll be interesting to see if their relationship’s going to turn ugly. Or if that’s merely an advantage for whatever Littlefinger has planned, because he has more plans than accents. 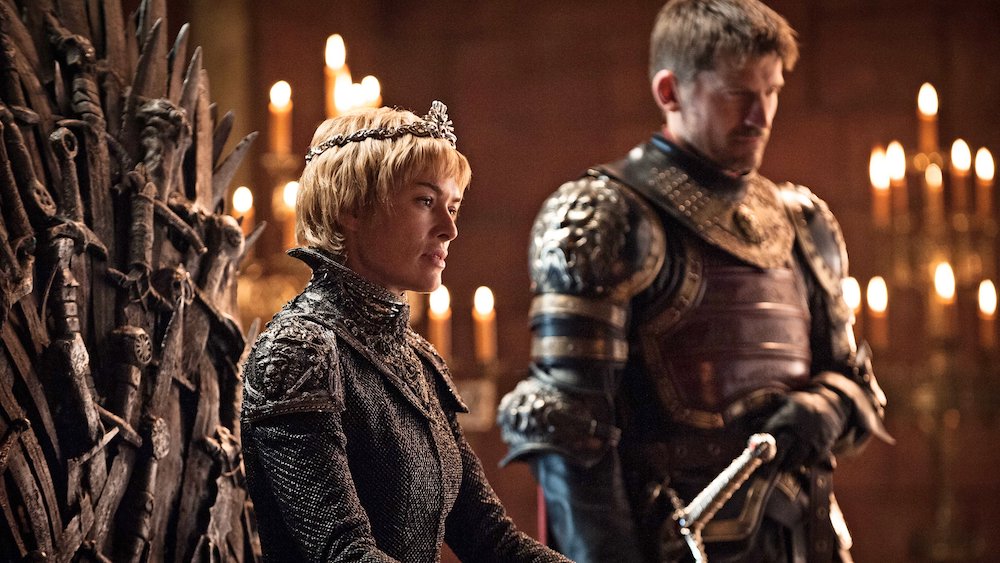 More pragmatic scenes, designed to remind audiences of where things currently stand. Cersei is Queen of the Seven Kingdom, but in reality only two as Jaime Lannister (Nikolaj Coster-Waldau) informs her. Cersei’s violent victory over her enemies in season 6 was a sight to behold, but she’s merely cleaned out the infestation in the capital city. There are bigger and tougher enemies to handle beyond King’s Landing, looking in every compass direction. Jaime, for now, appears to be useful in having a tempering effect on Cersei, making her see sense, but I’m sure her underlying psychosis is going to splinter their relationship.

Besides, Cersei has enough of a plan to be getting on with: invite Euron Greyjoy (Pilou Asbæk) to King’s Landing with his Iron Fleet, hoping to form an alliance against Daenerys Targaryen (Emilia Clarke). Euron wants her hand in marriage in exchange for his help, but Cersei can’t yet trust him, so Euron heads off to prove his trust in her eyes. It’ll be interesting to see what he decides to do, but it seems likely this alliance will go ahead, pushing Jaime into the difficult position of being in love with a Queen who’s taken a King. One question, though: Euron’s fleet was stolen by Theon and Yara last season, so have his people really been able to build a fairly substantial one in that time? It’s often hard to get a sense of how much time’s passing in Game of Thrones. 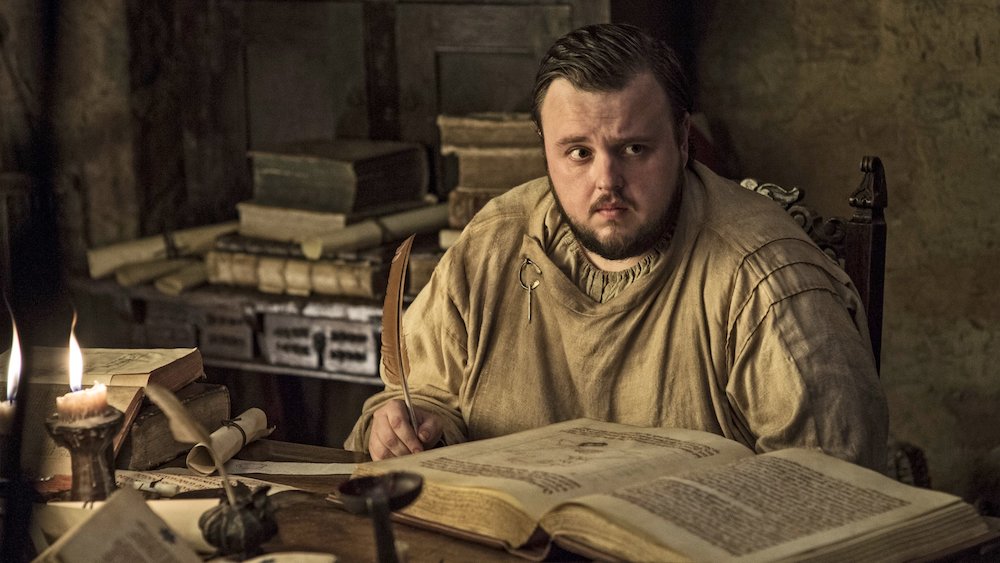 I’m not such a fan of Samwell Tarly’s (John Bradley-West) storyline, and it again seems to be used as a way of slowing the pace between the more exciting developments. But I enjoyed seeing that Sam’s arrival in Oldtown to start training as a maester isn’t as glamorous and exciting as he’d hoped. Rather than be taught arcane mysteries, he’s retching while changing bedpans and performing menial duties day in day out. Still, he appears to have an ally in friendly Archmaester Marwyn (Jim Broadbent), but it doesn’t go as far as understanding that Sam’s research into Dragonstone could be instrumental in defeating the White Walkers. Luckily, Sam’s steals a book and discovers that a mountain of dragonglass is the foundation of Dragonstone, so sends a raven to inform Jon of his discovery.

One thing that did pique my interest was the unexpected presence of Jorah Mormont (Iain Glen), who has evidently come to Oldtown in the hope of curing his greyscale. His entire arm appears to have scaled since we last saw him, but it’s good to know he’s still keen for news about Daenerys’s arrival in Westeros. One expects Jorah’s going to be cured and race to be at her side, or is that too optimistic for Game of Thrones? 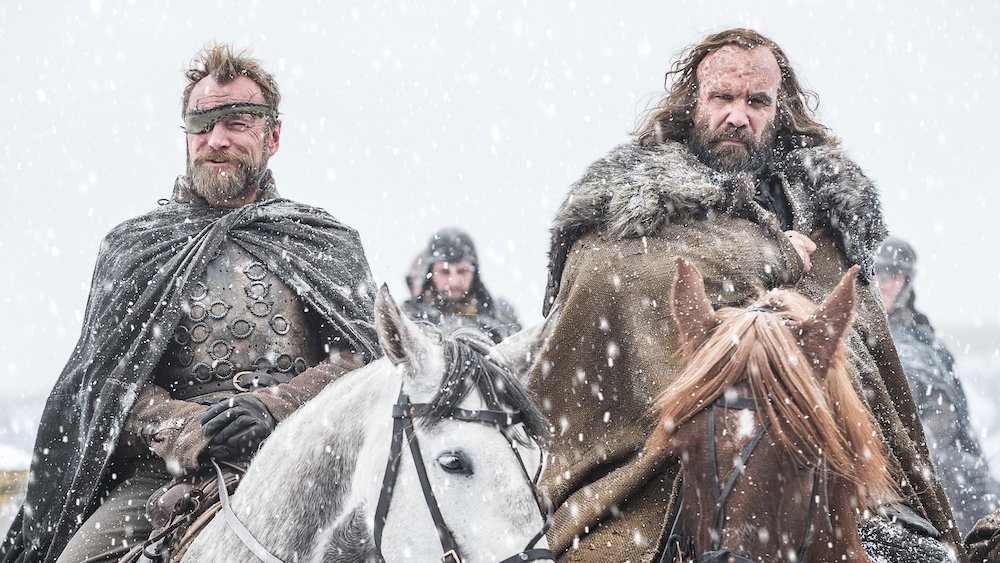 I’m enjoying the odd situation with fire-phobic Sandor “The Hound” Clegane (Rory McCann) joining up with The Brotherhood Without Banners, who worship a fire God. The grouchy Hound is always great fun to watch, with excellent deadpan delivery from McCann, and it was fun to see some of the ice between him, Dondarrion (Richard Dormer), and Thoros of Myr (Paul Kaye) start to thaw. A little. The Hound seems to have the ability to see the same visions Thoros gets from the fire, of the White Walker army’s advance, which is interesting. I’m enjoying his arc from atheist ogre to someone more spiritual who wants to do some good. There was a touching moment when The Hound buried the corpses of a farmer and daughter he once accepted the hospitality of with Arya, helped by Thoros. Could it be that The Hound is starting to make real friends and find his place in this world? 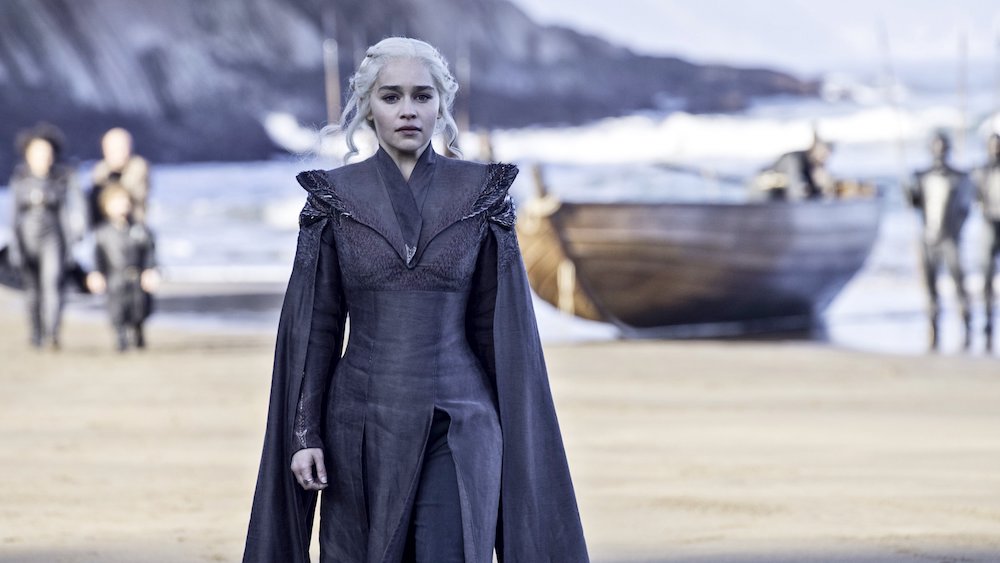 Everyone’s excited to finally see Daenerys sail into Westeros, but “Dragonstone” kept this titular moment until the very last scene. Finally, her fleet arrived in her Targaryen ancestral home, and we got a tour of the impressive interior of the fortress, including her family throne, before entering the war council room that used to play host to the Bolton’s. “Shall we begin?” is how Dany closed the episode, looking out at the map of the country before her, echoing the enormous one Cersei’s had painted on a foor. The battle lines are being drawn, and it’s interesting to note the strong feminist leaning Game of Thrones is keeping at the forefront of several stories. Most of the key players with actual power are women, and it’s possible Sansa Stark will even come to rule in Winterfell at some point.

“Dragonstone” was a solid opener, but it was more about setting out pieces and bringing audiences back up to speed. Not everyone’s obsessed with the show to have total recall of what happened in season 6, so it’s inevitable the casual viewer is going to need an hour to acclimate. But I’m excited to see where we go from here, especially as there are relatively few episodes to watch in 2017, and we’ve been told from a few actors that events happen at a dizzying pace. I just hope it doesn’t al fell rushed, as the slow-burn of Game of Thrones between the pay-off episodes is what always gave it such power.