Sometimes when I’m watching Vinyl I wonder: ‘would it have been a better drama if we’d spent a bit of time with Richie before his life went off the rails?’ I can’t fault Bobby Cannavale’s committed performance, but it’s also true he’s being asked to play a man in the throes of a drug-induced breakdown, and when you’re starting at such a high pitch it’s not long before you run out of places to go. It’s also the case that because Richie is, realistically it must be said, a raging asshole during this period, it’s hard to care for him when things threaten to go spectacularly wrong. As it stands right now, he’s an egomaniacal coke fiend who killed somebody—the fact he also understands music is nice for him but doesn’t exactly make me want to cheer him from the rooftops as he destroys the lives of everyone around him.

The Ballad of Lucy Jordan

When I interviewed Olivia Wilde ahead of the launch of Vinyl she said that she imagined Devon as a cross between Edie Sedgwick and Marianne Faithfull. I can see that, but what’s interesting is that it’s latter-day Marianne—the broken but furious singer who made the brutal, bleak album Broken English—she increasingly appears to be channeling. This week we watched Devon try to fit in with the wealthy housewives of Greenwich in an attempt to raise funds for a modern dance troupe; an interest which she later pointed out had been thrown to her by Richie as a sop, something to keep the little wife busy out in the country. The scene where she went screen print in hand to Andy Warhol (John Cameron Mitchell) and begged him for his signature so that she could auction it was a heartbreaking gem, and also a welcome moment of quiet power in a generally bombastic show. I know I say this every week but it’s worth repeating: the two best performances in Vinyl are coming from Wilde and Juno Temple. Devon could easily be a clichéd Betty Draper knock off, but Wilde’s skill constantly lifts her occasionally clunky material and ensures she’s probably the only person I truly care about.

Anarchy in the USA

By contrast, the most interesting thing about Jamie (Juno Temple) is her fury. In the pilot, Temple gave us the sense that she was viscerally turned on by the violence of the Nasty Bits. Yes, she wants to be an A&R executive, but there’s also something primal about her response to this band—a sense that she likes it rough and dirty, and that feeling was only strengthened last night when she hurled a bottle at them during a gig in order to get them to start playing the way they should. The dynamic between Jamie and the sullen Kip (James Jagger) is also increasingly interesting. They seem to be permanently on the verge of tipping into Sid and Nancy territory, but because Temple manages to sell her character’s rage and desire, it’s also one of the most believable parts of the show.

Welcome to my Nightmare

One thing that Vinyl did handle well this week was its celebrity lookalike. This week’s visiting rock god was none other than Alice Cooper (Dustin Ingram, having a ball in the role and showing how well this works with the right actor), who led the loathsome Clarke (Jack Quaid) down the primrose path of rock n’ roll debauchery, before humiliating him in front of his band thanks to judicious use of a stage guillotine. It was an entertaining subplot, and one that smartly illustrated the show’s central theme about executives and artists being at war more often then in agreement. The kicker to the story was that in a year or so’s time Alice will end up taking Clarke’s advice and ditching the rest of the band. Poor old Clarke, and after he’d boasted to the department that he was going to sign Alice as well… 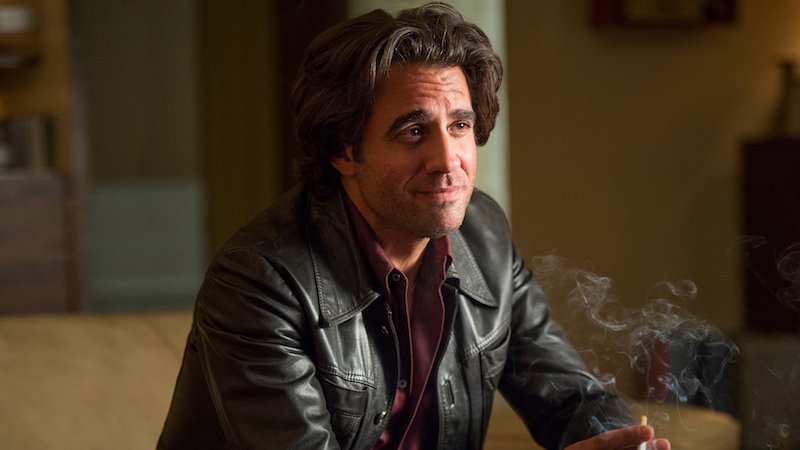 Hard to choose, but I’m going with MC5’s “Sister Anne“, narrowly over Thin Lizzy’s “The Rocker“.

You know what he said, he said that I’m Alice and you guys are just a bunch of schmucks standing behind Alice.

Oh dear Clarke, did no-one ever tell you that playing with the big rock n’ roll boys will always end in disaster?

So what do you think? Is Vinyl improving or does it remain all so much noise? Do you care about anyone on the show? And most importantly of all will Lester invent hip hop before Jamie invents punk? As ever all speculation and no spoilers welcome below…

THE DEFENDERS – Season One