Perhaps it was the impending Y2K that inspired filmmakers to dream up the best stories, or maybe they were desperate to get them released before the end of the world, but 1999 had a lot of stellar films. From Fight Club to The Sixth Sense, and Magnolia to Being John Malkovich, ’99 unleashed a huge number of films that are still celebrated today.

Wild Wild West is a well-known member of the ’99 Club, too, but nothing to celebrate. Will Smith infamously passed on playing Neo in The Matrix (1999) to star as Captain Jim West in this notorious box office bomb. This trivia prompts a comparison between the two sci-fi films and helps keep attention on Wild Wild West. Perhaps if it wasn’t for that stark contrast, Wild Wild West might have (and should have) disappeared quietly into the long list of terrible movies ever produced.

Another factor that makes Wild Wild West standout is its budget. At $170M, it was a staggeringly expensive film to produce for the time. In comparison, The Matrix, with its game-changing ‘bullet time’ VFX, only cost Warner Bros. $63M, and George Lucas’s long-awaited Star Wars: Episode 1—Phantom Menace cost $115M to make. 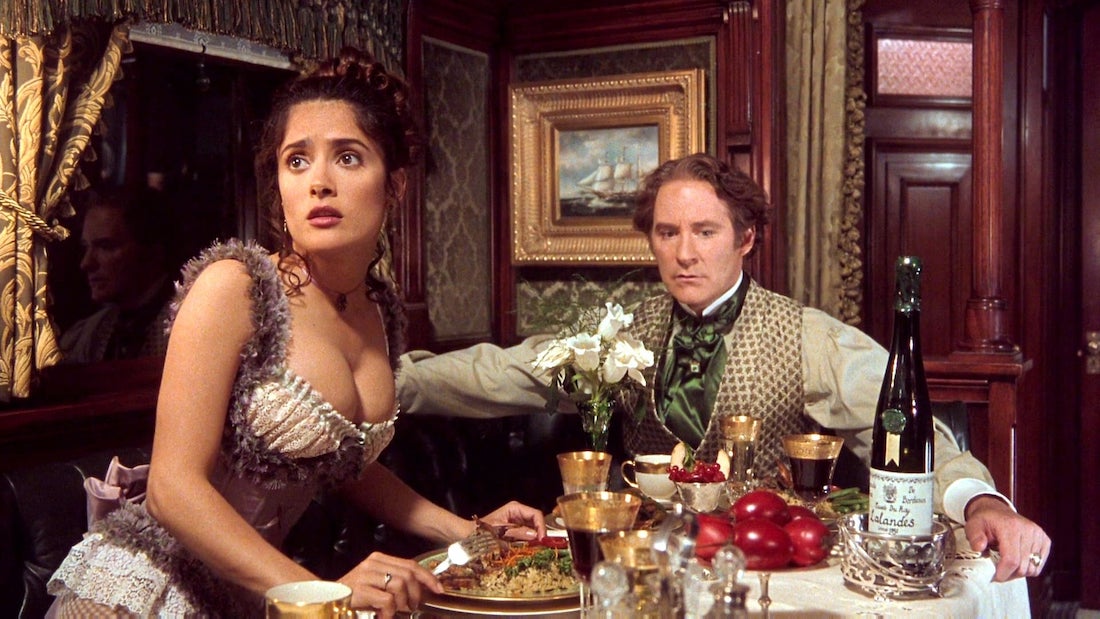 It’s unsurprising that the producers, Barry Sonnenfeld (also the director) and Jon Peters, thought this film deserved that expenditure. After all, even 20 years later, remakes are seen as a safer choice compared to taking a risk on original material. The Wild Wild West filmmakers banked on the sci-fi craze at the time and assumed that a popular 1960s TV series would please cinema audiences. That would explain why the casting involved a revolving door of A-list actors. Mel Gibson and George Clooney expressed interest in the characters of brash cowboy Jim West and crazy inventor Artemus Gordon over its five years of development.

If this was the reason the filmmakers didn’t put a lot of effort into the plot, it was an expensive mistake! Even with Will Smith headlining, Wild Wild West barely recouped its production costs and received five Razzie Awards, including one for ‘Worst Picture’. I have to admit, though, I saw Wild Wild West in the cinema as a child and thought it was silly but fun. It had big stunts, Will Smith, and steampunk elements that really fascinated me. The insanely catchy Wild Wild West tie-in pop song also stayed with me. Over the last few decades, I’ve heard that my initial thoughts on the film might need some revision, and upon rewatching it as an adult… yeah, Wild Wild West deserves all the Razzies it got.

This film is just a huge disappointment considering Barry Sonnenfeld and Will Smith made the superb Men in Black (1997) together, just two years before. There’s no cult status waiting in the wings here, as the film has aged even more poorly than expected. The plot is wafer-thin, with a story revolving around the reluctant teammates as they work together to save the newly-minted United States from a villainous ex-Confederate scientist. 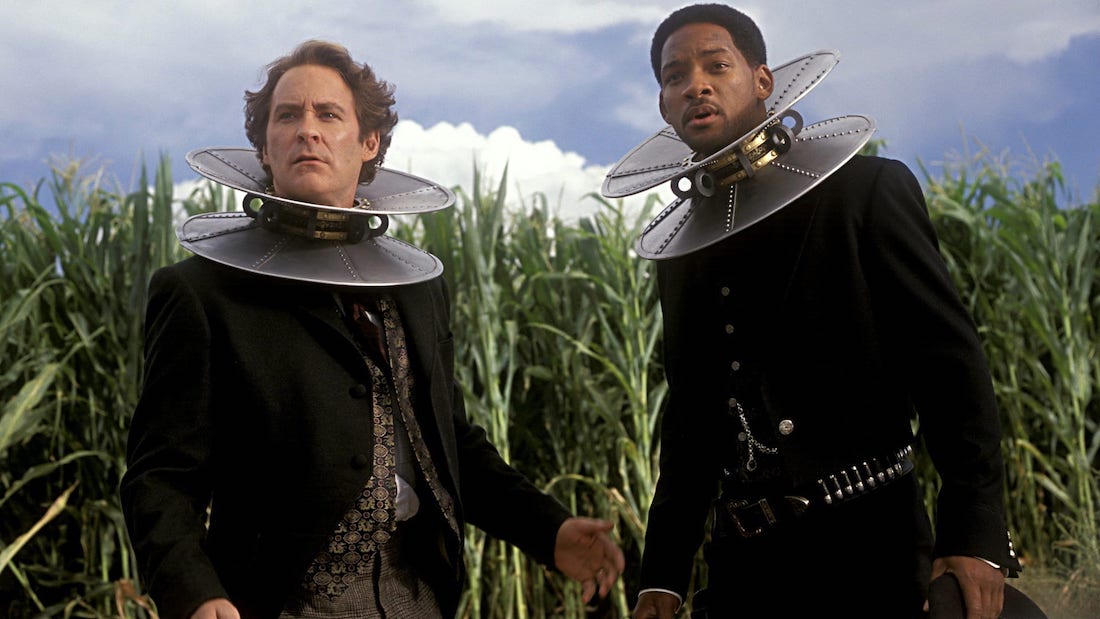 Will Smith as Jim West made sense on paper because this suave cowboy who catches villains was only a stone’s throw away from the street-smart Agent J he played in Men in Black. If you closed your eyes and removed the premise, Smith’s lines could easily have been transplanted over verbatim. Kevin Kline, playing both Artemus Gordon and the then-president Ulysses S. Grant, somehow has to deal with more time-appropriate dialogue, as do the rest of the cast. It’s jarring to hear and keeps you detached from the story. All one’s brain hears is “what’s Will Smith doing in this weird cowboy town?”

And he’s not even the one who stands out the most. The actor who suffers the greatest is Kenneth Branagh as villainous Dr Arliss Loveless, a wheelchair-bound man hell-bent on destroying the United States. His dialogue is almost impressively bad, married to an awful Southern accent. He aims for charmingly-evil and unhinged (a la Austin Powers’ Dr Evil) but ends up as a cringe-worthy, inept B Movie adversary. It’s painful to watch. 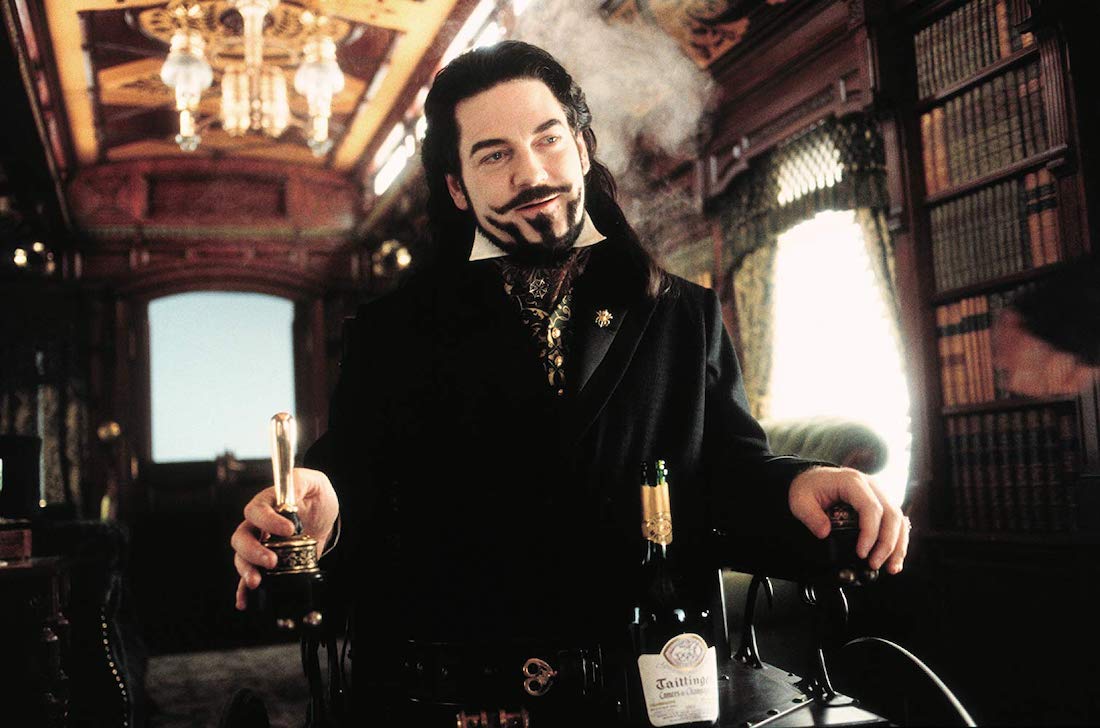 Wild Wild West also tries too hard to recreate Men in Black’s tone but fails due to the premise. Men in Black worked because it was grounded in reality, just as Sonnenfeld’s other successes had been. The Addams Family (1991) was rooted in our love for our family, regardless of how weird they were. But this film is set in a sci-fi version of the post-American Civil War period, with steampunk machinery and no consistent vision tying the film together. As a viewer, we couldn’t laugh at the jokes because we didn’t have a baseline from which to find absurdity in its reality. The whole film was bizarre.

Consequently, the many elements that would seem like parody or satire fall flat. When Smith’s hero and the villain exchange barbs, the former’s insistence on making fun of the latter’s physical disability is downright offensive. The fact that Salma Hayek, who’d quickly gaining attention after Desperado (1995) and From Dusk Till Dawn (1996), plays eye-candy both protagonists lust after, which isn’t surprising for female action comedy roles of the time. But it makes your heart ache when you know that she’s just three years away from delivering her exceptional performance in Frida (2002). 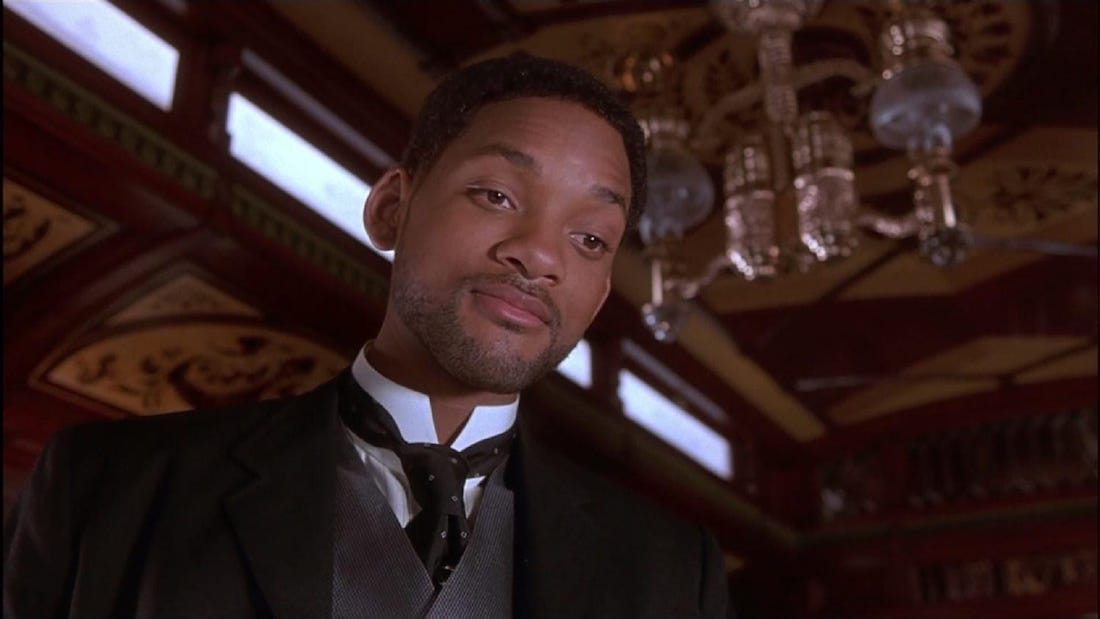 Wild Wild West doesn’t even allow you to turn off your brain and enjoy the action. Most of the fight scenes are hampered by too much CGI, which isn’t dreadfully integrated but ends up being the only message the film gives. Look at how much money we have! We can create a mechanical spider upon which you can fight on! We can even make Kenneth Branagh look like a spider too!

In the end, this film is so bad that even the star himself regrets it. In a 2016 interview, Will Smith admitted he only signed on because he wanted to keep being a box office winner after Bad Boys (1995), Independence Day (1996), and Men in Black. That was 17 years after the film had come out, and yet people were still asking him about it because he gave up The Matrix for it. That shows the impact of this (but very expensive) blip on his resume and makes one wonder what impact a better script or lower budget could have made.

Maybe Wild Wild West would have spawned its own James Bond-esque franchise. What a wild wild waste!