This is a test. One we’ve done countless times.—Dolores.

The opening flashback threw us an early curveball, as it seemed to be another flashback to a time when Arnold (Jeffrey Wright) is once again checking the diagnostics of his favourite host, Dolores (Evan Rachel Wood). But the position of power is switched, when it’s Dolores who disagrees with the way Arnold phrases a sentence, then freezes his motor functions and reveals she’s performing a test of his “fidelity”.

It seems that this “Arnold” was actually Bernard, presumably being tested by Robert Ford, using Dolores, before he became part of the workforce? The scene also echoed the one in “The Riddle of the Sphinx”, where William was likewise testing the fidelity of the James Delos robot copy, so maybe this is confirming that Bernard is essentially a successful breakthrough in what was trying to be achieved with James? Did Ford do this on the side, without anyone else’s knowledge? Why involve Dolores, unless she was just running a command and asked to compare her memories of engaging with Arnold to this new version of him?

Of course, I remain very confused that someone who’s the spitting image of Arnold (the genius who co-created the hosts) could just get a job at Delos and nobody bat an eyelid. It’s like a clone of Steve Jobs turning up for work at Apple one day, working alongside Tim Cook… someone would say something, right? This was a big hole in my understanding of season 1, and has yet to be filled. I have a suspicion it’s something that will never really make sense, unless we’re expected to believe Arnold was a reclusive man few people ever set eyes on. But is that even plausible?

Also worth noting that the aspect ration of this scene was 2.40:1, whereas Westworld is usually made to fit 16:9 widescreen televisions with no letterboxing. More on that later… 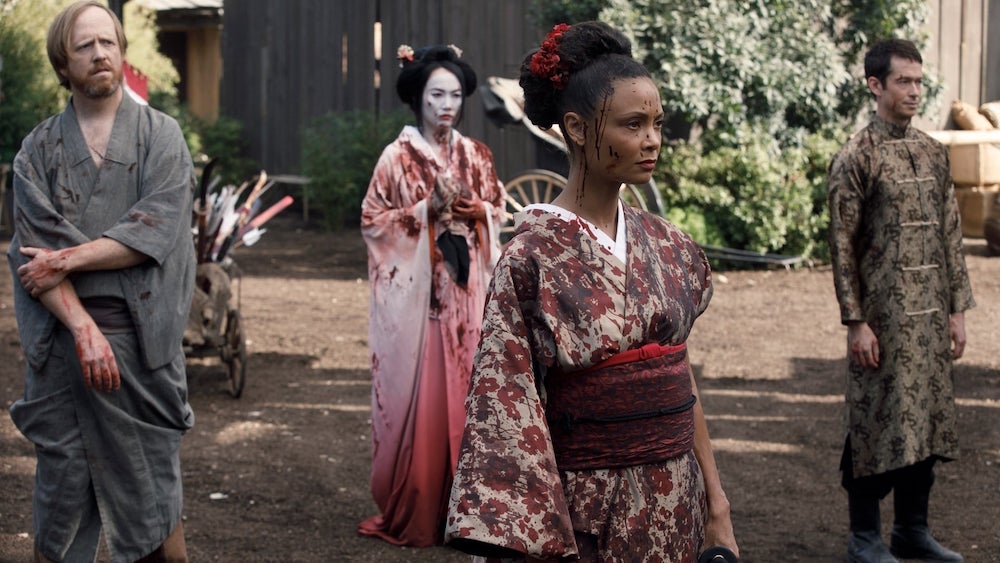 Shogun World provided a dose of something different last week, and Maeve’s (Thandie Newton) story in the Land of the Rising Sun concludes this week. Akane (Rinko Kikuchi) cut out her daughter Sakura’s (Kiki Sukezane) heart and joined Maeve’s group in their expedition to the Snow Lake—secretly the location of a hidden exit to a park bunker. There are quite a lot of characters assembled in this storyline, now Maeve, Hector (Rodrigo Santoro), and Sizemore (Simon Quarterman) have been joined by Felix (Leonardo Nam), Sylvester (Ptolomy Slocum) and ronin Musashi (Hiroyuki Sanada).

It therefore wasn’t a big surprise when they became separated, after Musashi secured them safe passage by defeating Tanaka (Masayoshi Haneda) in a duel—involving another graphic loss of a limb. This little two-week storyline resolved quite neatly for Akane and Musashi, even if a happy ending wasn’t possible.

It also made me wonder, once again, how big these parks are and where they’ve been built, because wasn’t that Mount Fuji? Have they really built a replicate of a mountain in this park? 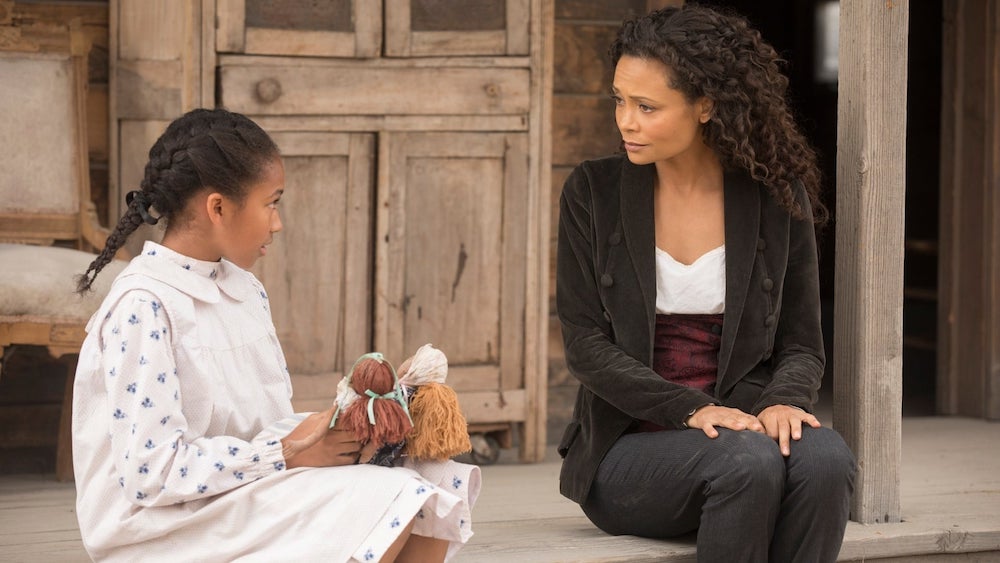 And after escaping Shogun World, it was a surprise to find that Maeve’s quest similarly came to an end. She was finally reunited with her daughter on the farmstead she remembers from a previous “character” she played, only to find that her child doesn’t remember her and currently has another maternal figure she’s programmed to cherish. More unexpected was realising that Maeve’s wandered into a familiar ‘loop’ of the farmstead’s narrative, with the Ghost Nation riding party once again descending on the house.

Only this time, Maeve manages to run away with her “daughter”, only to find that the Ghost Nation’s leader, Akecheta (Zahn McClarnon), doesn’t want to slaughter them… he wants them to follow him, as they’re looking for the same thing.

Also worth noting that Maeve continues to behave like she’s growing and even bonding with the friends (and enemies) she’s joined by. It makes her very likeable and more “human”, certainly in contrast to Dolores right now, who just manipulates people and has fellow host personalities “adjusted” if they’re not to her liking. 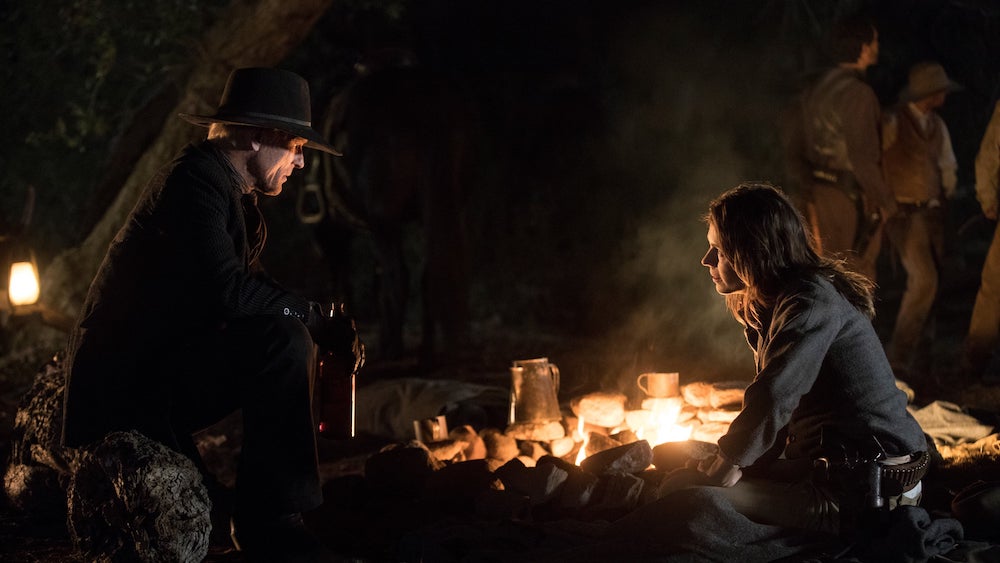 All right. Give it to me. What the hell you doin’ here? Thought you were done with me, and the family business.—Man in Black.

One storyline I’m not sure what to make of, just yet, is the Man in Black’s (Ed Harris). He was reunited with his daughter Emily (Katja Herbers), known to us as “Grace”, but seems to believe she’s just a host facsimile Ford has created to mess with his head.

I’m still not sure why the MIB seems to think Ford would go to such lengths, or what he thinks his “game” might be, but hopefully things will become less cloudy soon. Their campfire chat about Emily’s late mother and childhood seems to put the MIB’s mind at ease she’s genuinely his daughter, however, but it seems he doesn’t much care. She’s a distraction he doesn’t need, so he abandons her while she sleeps. 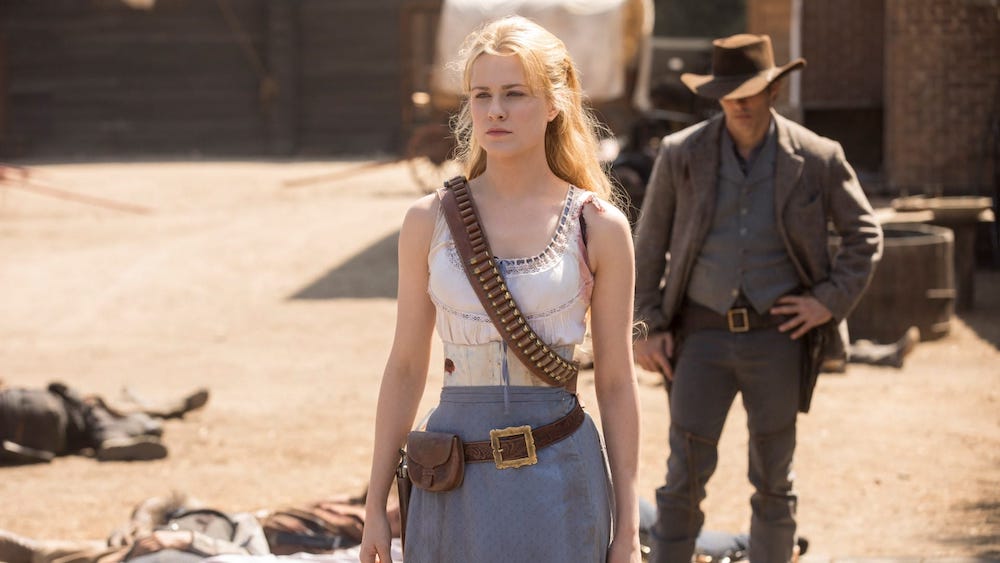 The day’s wastin’. Thought you wanted to ride at sunup.—Teddy.

In the near-past, Dolores puts her plan into action involving the repaired locomotive. It’s loaded with explosives and sent on a collision course with the Mesa’s entry terminal, causing a very loud explosion. It seems they’ve just caused a serious security breach, so is the plan to now escape into the real world? This wasn’t the most revelatory of subplots, although we did get to see Teddy (James Marsden) in his altered state—which wasn’t as radical as I was expecting. He’s more ruthless and loyal, but for some reason I was expecting a total transforming of his personality. He’s even aware that Dolores has tinkered with her settings, so to speak, which was unnerving.

Did you shut off the killer robots?—Coughlin.

Still in the near-past, Charlotte (Tessa Thompson) and Ashley (Luke Hemsworth) finally got Abernathy (Louis Herthum) back to the Mesa with his head full of top secret code. This enabled Charlotte to call for backup, led by an Irishman called Couglin (Timothy V. Murphy), beyond what has already been sent, which I don’t fully understand. Why wouldn’t Delos send everyone possible to contain the problem happening in the parks? Why wait until Abernathy was extracted first? Does it even matter if he’s “killed” while in the park? We already saw another host’s brain extracted after “death”, so I’m not sure I really follow what Charlotte’s been determined to do. Isn’t Abernathy just a glorified briefcase she needs to smuggle out? The chaos happening in the park is the perfect cover for that. Anyway, the minute the security team get vital systems back online, is just when the locomotive crashes. 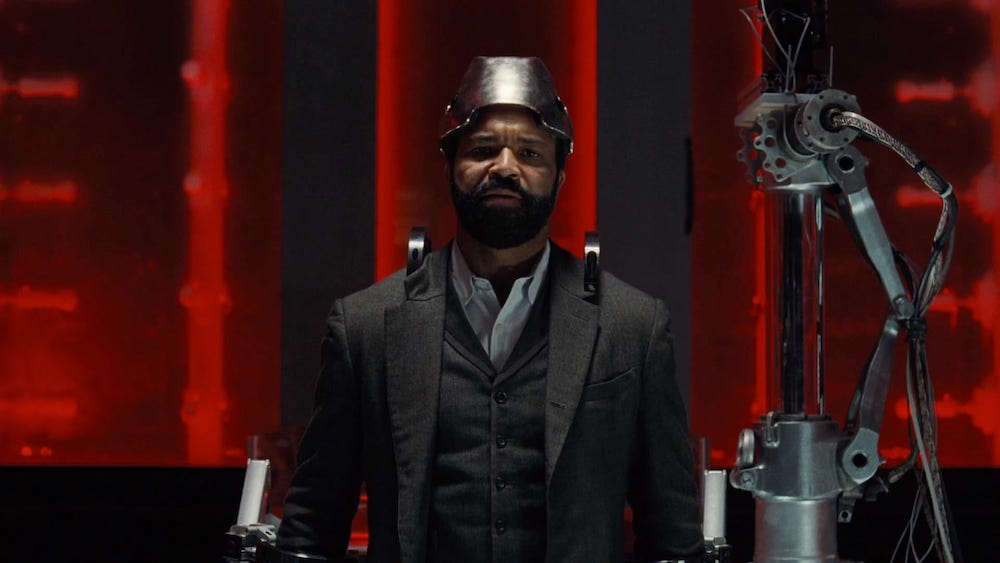 And finally, in the same timeline, Bernard and Elsie (Shannon Woodward) go to a new area of the park after detecting strange readings from there: The Cradle. It’s essentially the repository of all host data, where everything exists on servers before being uploaded into host minds and Delos can run sandbox simulations of their narratives, but something inside is preventing the Delos cleanup teams from accessing the system.

Bernard then makes the brave decision to connect to the Cradle’s mainframe, by having his skull cut open and brain extracted, which presumably would hurt him just as much as it would a human. He seemed relatively okay going through that, which felt odd.

Regardless, Bernard’s consciousness finds itself mingling with the programming that exits to create Sweetwater - which is portrayed as if Bernard’s actually there in the town, pre-uprising, to enter the saloon and discover a familiar face sat playing the piano: Robert Ford (Anthony Hopkins). This might have been a big mid-season surprised, as intended, but once again fans are a little ahead of the writers. Which isn’t necessarily a bad thing, but it seemed very clear that Ford’s consciousness is swirling around the system, so having Hopkins reprise his role as his own “digital ghost” was something many people predicted. It now seems almost a given that Ford has managed to do what eluded James Delos, and just needs to get his essence into a suitable host body. 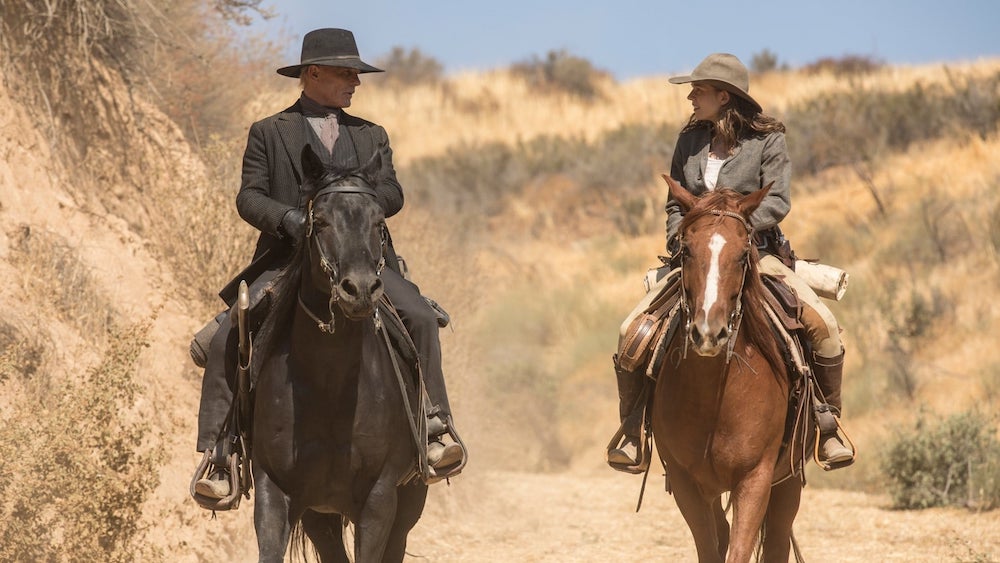 Westworld seems to alternate between episodes that set things up and those that deliver on things, so “Phase Space” was definitely in the latter camp. It was another piece-moving episodes, but I did appreciate getting some unexpected movement on Maeve’s wish to be reunited with her daughter. That happened a few episodes sooner than I was expecting, and I was even beginning to enjoy spending time in Shogun World - partly because violent sword fights are more entertaining to watch than gunplay.

There weren’t too many other surprises, beyond perhaps MIB thinking his daughter was an automaton for awhile, as the surprise ending with Ford’s reveal seemed like something we knew was coming. Somehow.

But this episode does set things up for interesting stuff to come. Maeve perhaps has a new mission with the Ghost Nation that have haunted her dreams for years, the locomotive crash could take the fight into the real world (or at least the park’s more sensitive areas), and the reveal with Ford is undoubtedly a big puzzle piece that will shed some light on what he’s doing from beyond the grave.

“Phase One” was a good hour, but with so many storylines pulling in different directions, coupled by curveballs the show throws in terms of its various time periods (which are hard to differentiate), and now the confusion over Bernard/Arnold, or even if scenes we’ve assumed happened in the past are occurring in a simulation… it’s becoming a bit of a head-scratcher. And now always in an enjoyable way, as some clarity is always welcome so you can really take grip of the story in your head.