Do we really need yet another boxing film? Last year, my love for Jake Gyllenhaal lured me into watching Southpaw, only to be underwhelmed to the point of boredom. So, I was rather set on not letting my love for another talented, sexy thespian trick me into making a similar mistake. However, given how Whiplash is still a favourite of mine, I caved at the prospect of a shirtless, muscled Miles Teller. Don’t judge me, we all have our weaknesses…

Surprisingly, Bleed For This is an entertaining movie, despite following every instruction from the rulebook of sports movie filmmaking. These are always stories of sacrifice, redemption, and second chances, set during rough if not borderline bleak scenarios. Like many other titles within the genre, this one’s the journey of a sporting comeback, only this Bleed For This is more unbelievable than most! The fact it’s a true story only makes it doubly compelling, in spite of whatever poetic license writer-director Ben Younger may have taken in adapting the truth.

The poster’s tagline perfectly sums up the film’s main strength: ‘This is what the greatest comeback in sports history looks like.’ What you discover by watching the film, and the thing that wins you over, is that our protagonist Vinny Pazienza (Teller) is a genuinely likeable character, so we can’t help but root for him to succeed, regardless of any storytelling manipulations. 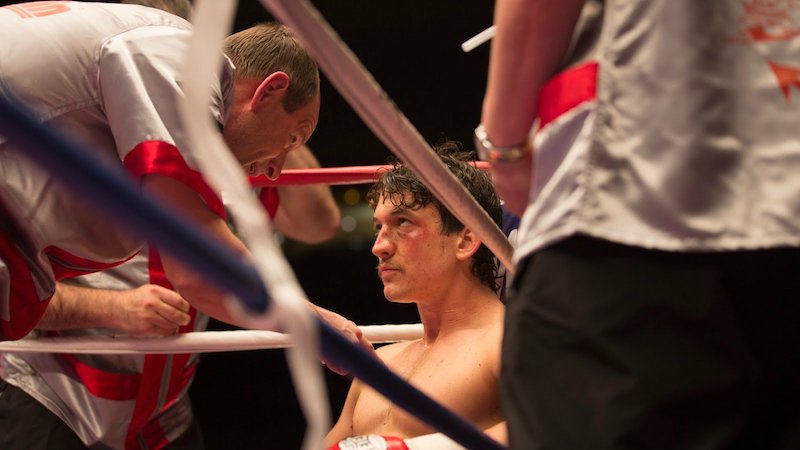 Having generally never followed any sports (except for a bit of footie during my teens), boxing is something I’ve never been attracted to. Maybe it’s got something to do with my aversion to violence, but truth is that not even the underlying homoerotic tension of its discipline has managed to snare my attention. That’s why cinema’s been my only window into learning anything about famous figures like Muhammad Ali or Rubin Carter.

Pazienza hails from Rhode Island, and during his professional career held world titles in the lightweight and light middleweight divisions. When former boxer Kevin Rooney (brilliantly portrayed by Aaron Eckhart), took Vinny under his wing for training, suggesting the jump in weight class, the move seemed a wise one. Unfortunately, Pazienza was involved in a car accident that resulted in a serious spinal injury. With a broken neck and paralysis only narrowly avoided, Vinny’s told by his doctors that he won’t be able to fight ever again. After finally being released with a metallic Halo brace affixed to his head, Vinny then spent three months in a bed-ridden nightmare, as spirit took a huge hit that only the faint prospect of a comeback could ever heal.

What’s surprising and awe-inspiring about Vinny is his resilience and conviction that he’d overcome the injury–not just to survive but because he didn’t see any other way to give his life meaning and purpose. In the process, he finds a great friend in Rooney and their bond becomes pivotal to the story, as Vinny challenges the opposition to his determination to fight again.

Even if you don’t know Pazienza and this true story, it’s not hard to predict how things will end, but that won’t spoil your enjoyment of Bleed For This. Ben Younger (who debuted promisingly with 2000’s Boiler Room) and then, aside from some TV work, only made Prime in 2005, returns to prove he’s a good director who can get the best from his actors. Teller has the raw charm and good humour that underpins Pazienza’s personality; while Eckhart nails Rooney’s boozy demons and sincere affection for his friend. Their friendship and the actor’s chemistry together are a pleasure to watch, pulling you through a fairly clichéd story making a trip to the cinema worth the effort.