For any millennials reading, it must be hard to appreciate just how much of a phenomenon The X-Files was in the 1990s. Here was a television show with a beautifully simple concept (two FBI agents—one a sceptic, one a believer—investigate the paranormal) that worked for mass audiences and geeks alike. It paved the way for much of today’s pop-culture, too, advancing what was possible on the small-screen and spearheading the use of serialised ‘mythologies’ that are now so popular. 19.8 million Americans were tuning into the exploits of Fox Mulder (David Duchovny) and Dana Scully (Gillian Anderson) at its peak, and even during its twilight years The X-Files was capable of reaching 13.9m viewers.

However, despite its unquestionable cultural impact, The X-Files is a tarnished memory for many fans, including myself. Much of that is because Fox allowed creator Chris Carter to run the show into the ground, years past its natural endpoint when Duchovny left and Mulder was fazed out of the narrative. 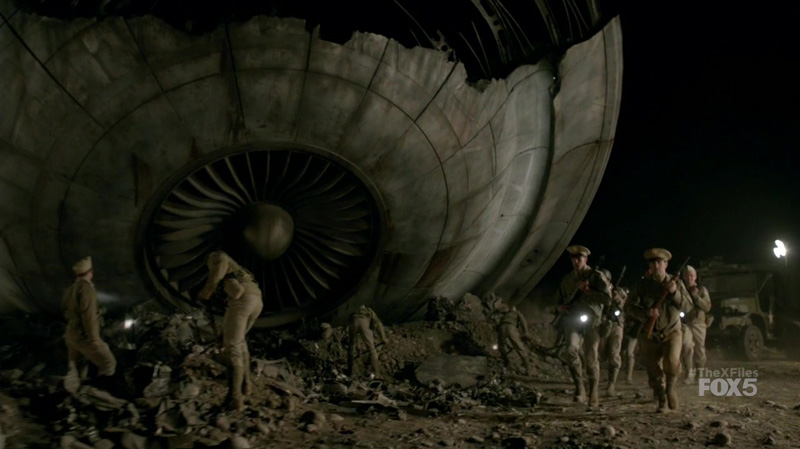 The alien mytharc never drew to a very satisfying end, either, which weakens the repeat value of episodes focused on the central government conspiracy. This was partly intentional, as it was presumed The X-Files would transition to the cinema after TV (where they could do justice to the alien colonisation scheduled for 2012), but audience interest was too low by the time the series ended in 2002. Duchovny and Anderson also wanted to do other things away from extra-terrestrials, understandably… and when they did return for 2008 movie The X-Files: I Want to Believe, Mulder and Scully were in a weird dynamic and embroiled in a dull story featuring Billy Connolly as a psychic paedophile.

So, while I was filled with nostalgic excitement for this year’s re-opening of The X-Files with a six-part ‘event series’, the truth is that this show’s been disappointing me for longer than it enthralled me. You might say it’s The Simpsons of drama. 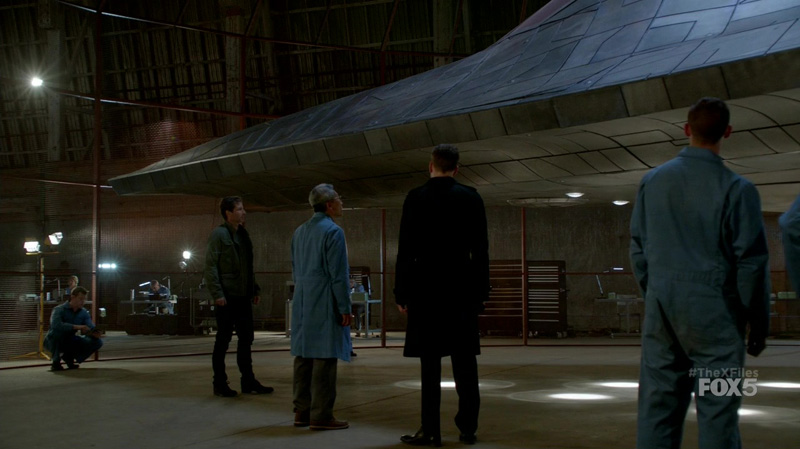 The premiere picks up 14-years after the series finale, and 8 years after the disappointing second movie. Things don’t appear to have changed too much for our heroes (Mulder’s a haggard recluse; Scully’s treating kids with abnormal birth defects at a local hospital), and it becomes clear Mulder’s rebellious spirit has calmed. Where once he was doggedly chasing “the truth” down dark corridors with a flashlight, Mulder now makes a point of qualifying he only wants to believe. A decade spent toiling on fruitless cases has eaten away at Mulder’s soul, so he’s not quite the tenacious oddball of his prime; he’s resigned to the fact he’s been chasing his tail for years, and is healthily skeptical about the conspiracies he’d once have blindly followed. 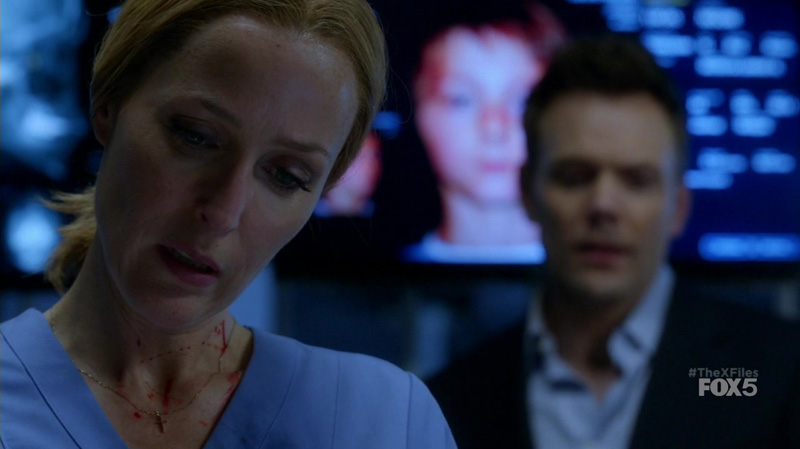 This all begins to change during this new X-Files’ premiere (written and directed by Carter), which strains to get the show back on its feet for a modern audience. FBI Assistant Director Walter Skinner (Mitch Pileggi) contacts Scully, asking her to get Mulder in a room with right-wing webcaster Tad O’Malley (Joel McHale)—a loquacious man who’s achieved fame by fear-mongering. Mulder isn’t convinced by O’Malley’s crazy-talk, until he’s taken to see a triangular ship built from alien technology levitating in a nearby hangar. It seems O’Malley has a fresh, contemporary perspective on the machinations Mulder spent his Bureau days investigating, and turns out it’s less to do with ‘little green men’ than a secretive group of “über-violent ultra-fascists” plotting to takeover the world, who’ve been controlling and conditioning the public using advanced alien tech.

You’re either on-board with this latest twist to The X-Files’ already convoluted mytharc, or you’re simply not… but it’s easy to see why Carter has revealed everything we knew until was a smokescreen, even if that’s inherently annoying for longterm fans. 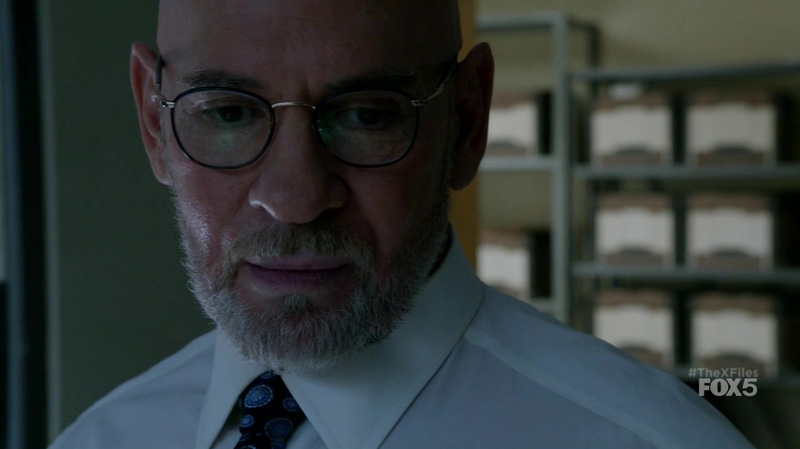 Times have changed, that’s for sure.

Conspiracies may still be popular and even more widespread, but apportioning blame on U.S officials aiding the colonisation of the planet by extra-terrestrials just seems naïve and silly, in a post-9/11 world full of more down-to-earth fears. These days we’re actually more tolerant of governments keeping secrets and acting with ulterior motives, so what Carter’s done is shift the show’s interest in UFOs to the right a little, so the deeper conspiracy is more human and contemporary. Ordinary men are to blame for society’s problems, not creatures from outer space.

What if everything we’ve been led to believe in is a lie? What if there is no alien conspiracy? —Mulder 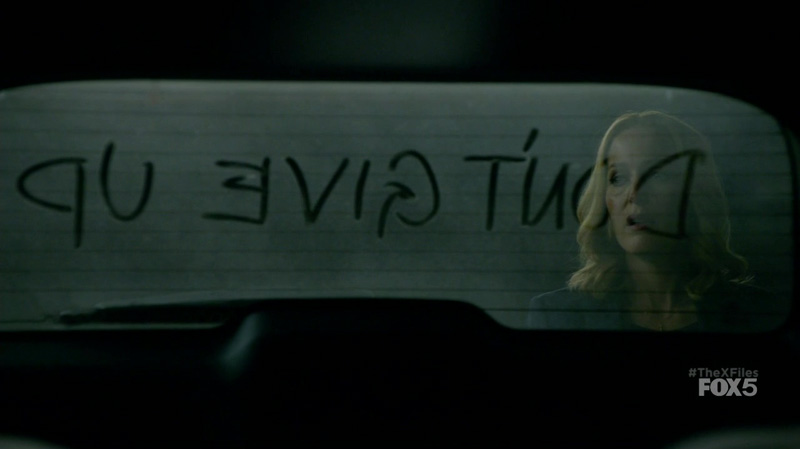 Crucially, too, putting more of a “human face” on matters is something Dana Scully can more readily buy into, which mean the sceptic/believer angle of the show has adjusted slightly. And that’s fair enough, as one of the most annoying aspects of the ’90s series was seeing Scully pooh-pooh all of Mulder’s theories at face-value.

It’s fear mongering, isolationist, clap trap, techno-paranoia so bogus and dangerous and stupid that it borders on treason. Saying these things would be incredibly irresponsible.—Scully

While I didn’t have a problem with “My Struggle” tweaking the formula (prompting a resurgence of Mulder’s desire to expose the real truth, with Scully’s backing), there were unfortunate issues with this episode in terms of its performances…

They may have played these characters for over two decades, but I got the distinct impression Anderson and Duchovny were having problems getting back into their characters. Maybe it’s partly down to their advancing years (Duchovny’s 55, Anderson’s 47), but there were times when they were missing a step. Their famous chemistry wasn’t as strong and, frankly, it sometimes felt like Duchovny had popped some diazepam. Maybe this was intentional, seeing as Mulder starts the episode very subdued and only galvanises once he’s touching a spaceship for the first time. It just felt like a playfulness was missing, and I’ve heard it argued this is evidence the actors are begrudgingly going through the motions for an easy pay cheque. I don’t know if I’d go that far (Anderson and Duchovny both have other irons in the fire, hence the brevity of this return), but I was still disheartened Mulder and Scully’s badinage felt half-hearted. The anticipated thrill of seeing them back together just wasn’t there, for me, which was both a surprise and a shame.

Still, I’m hoping things will improve as the show continues. The next four episodes are all monster-of-the-week tales, which were always The X-Files’ strongest suit. And, on a technical level, this episode’s special effects (of a downed flying saucer, and an injured alien crawling away from the crash site) were far more convincing than anything the ’90s run, and there was a bravura final shot of the show’s master villain, the infamous Cigarette Smoking Man (William B. Davis), inhaling one of his beloved Morley’s through a tracheostomy hole. 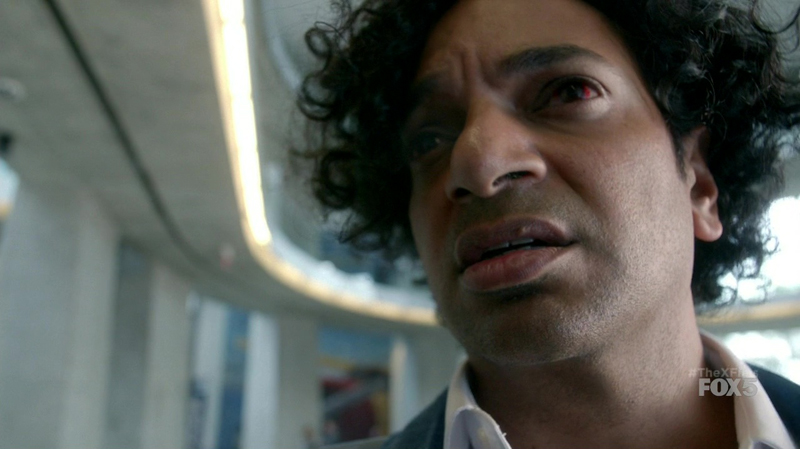 Airing the next day (perhaps to try and dispel episode one’s predictably negative reviews), was “Founder’s Mutation” from writer-director James Wong—who wrote in partnership with Glen Morgan during the show’s vintage years (1993-97), and is often credited with being a key part of The X-Files’ early success. Wong’s back for this event series, although he no longer writes with Morgan, and the result was a big improvement over the patchy, exposition-dump of the previous night.

Mulder and Scully (uh, just handed back their FBI credentials?) arrive at the server room of Nugenics Technology, to investigate the suicide of Dr Sanjay (Chris Logan); an employee who stuck a letter opener through his eardrum, into his brain, out of sheer desperation to stop a high-pitched noise nobody else could hear. After Scully notices Sanjay has the words ‘Founder’s Mutation‘ scrawled on his palm, Mulder theorises that infrasound made Sanjay kill himself and the noise is somehow connected to the company’s reclusive founder, Dr Augustus Goldman (Doug Savant). It turns out that Goldman’s conducting research on children suffering from genetic abnormalities, and his experiments have led to several youngsters gaining paranormal abilities—including telepathy. And in the case of a young janitor called Kyle Gilligan (Jonathan Whitesell), this ability can trigger searing auditory hallucinations in normal people.

Of the first two episodes, “Founder’s Mutation” is the hour that best represents what The X-Files was back in the day, even if the story felt like something from one of the later, weaker seasons. In some ways it actually felt like an hour of Fringe (arguably the best show that took inspiration from X-Files), and there were a number of clever moments and gruesome sequences that left an impression. Wong’s currently writing on American Horror Story, and one moment involving young kids with grotesque physical deformities certainly felt like the kind of ‘shock value’ sequence that FX drama would lean into. Fortunately, for the most part this hour was a well-plotted example of a type of story The X-Files became very famous for. The story unfolded at a good pace, there were disturbing and surprising moments, it wasn’t too predictable, and there were instances of humour to stop things getting too heavy (I particularly liked the moment a source thinks Mulder’s looking for oral sex).

For anyone concerned this new X-Files is going to ignore established canon, and perhaps stand too far apart as a quasi-reboot, I was pleased the issue of Mulder and Scully having a child together was returned to. Their baby was given away for adoption during the series to keep him safe, and this story made both parents consider what their lives would be like if they’d kept him. William would be a teenager, and while Scully daydreams of taking him to school, and Mulder imagines helping him launch a toy rocket, both reveries are tainted by a belief reality would be much darker—Scully finding her son’s literally half-alien, and Mulder that he’ll be abducted by aliens just like his sister.

You’re never just anything to me, Scully.—Mulder

I’m not sure if those scenes worked all that well, however; mainly because I don’t recall The X-Files doing very many ‘dream sequences’ of that type before, and I also have a suspicion most viewers stopped watching by the time Mulder and Scully had a child together, so maybe it was confusing? But it’s also a hint the issue of William’s whereabouts will play into the remaining series more strongly (will he find his biological parents?), and that Carter’s not going to pretend certain things didn’t happen to his characters—even the unpopular developments.

“Founder’s Mutation” may have been the second episode to air, but it was actually the fifth to be filmed, so it was heartening to see Duchovny and Anderson behaving more like their old characters. Both actors have aged well, let’s be clear, but you can’t hide the fact Mulder and Scully now resemble a middle-aged aunt and uncle, which just takes a bit of getting used to. And it’s becoming particularly noticeable that Duchovny’s voice has dropped an octave, although he was looking significantly less jowly here. I just wish their chemistry was back, but I’m still not feeling it yet. 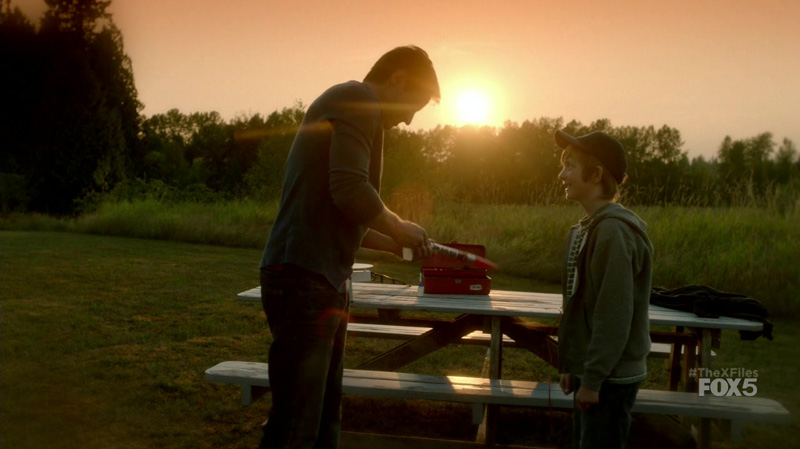 Written By
Dan Owen
More from Dan Owen
There were a lot of revelations in the mid-season “Lens”. Personal secrets...
Read More