Criterion’s Blu-ray release of The In-Laws arrives with no great anticipation or fanfare. It’s a film that’s flown under the radar for a long time after its poor studio handling and box office performance. It’s also been released in the same week as the death of its director, Arthur Hiller. This makes it a fitting time to look at this 1979 movie in more detail. Hiller was best known for Love Story (1970), so to discover he was also responsible for one of the most gleefully crazy comedies of its era comes as a big surprise. It succeeds simply because it makes you laugh and keep on laughing.

Sheldon Kornpett (Alan Arkin) is a successful dentist with a wife and daughter. If he’s notable for anything it’s for how mild and straight-laced he is. The time has come, though, for his daughter to get married, and that’s where the in-laws of the film’s title step in. Vince Ricardo (Peter Falk) is secretly working as a CIA agent and his son’s in love with Sheldon’s daughter. Thanks to a ridiculous plot revolving small countries needing to send inflation through the roof in order to settle their national debts, this odd couple get dragged around Central America, and, along the way, Sheldon sees his entire self-image disintegrate, while Vince pretty much remains Vince.

The array of comedic styles deployed in The In-Laws is what’s most impressive. Physical slapstick, one-liners, wordplay, and absurdist farce all play a part. The odd-couple pairing is what drives the farce and humour, however. It’s a simple conceit, but by having one man who’s already at home in the criminal underworld and another for whom it’s new and increasingly stressful, the comedy builds and builds. Every bullet that flies past Sheldon’s skull (of which there are many), adds to his gradual loss of sanity. Vince, on the other hand, remains unflappable, even when confronted by a singing firing squad. 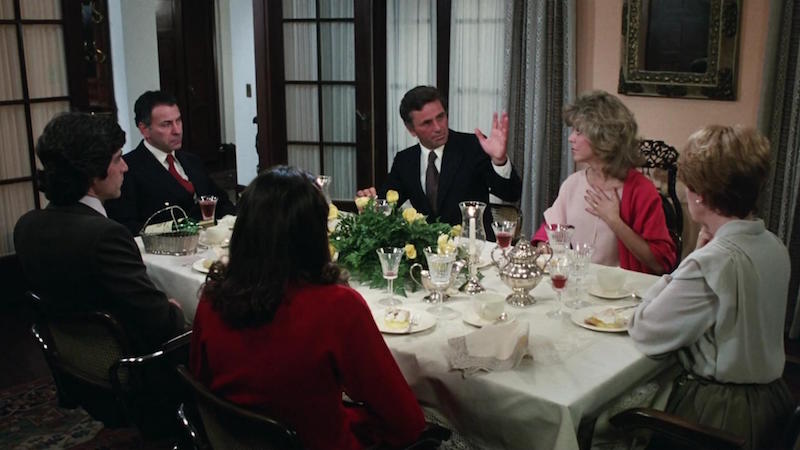 The comedy clearly fits within a tight structure, though. Today, the Hollywood approach to comedy is ramshackle and improvisational in so many cases. Although this might occasionally yield humour, there are usually as many gags that fall flat as there are gags that work. This is where The In-Laws differs. It’s a film that relies on strong writing, straight acting, and precise framing. In some of the best scenes, Arkin manages to be funny by doing nothing, or something that looks like nothing. He’ll often position his body in a particular way or throw a glance towards Peter Falk that conveys his shock, anxiety, or contempt, comically without a word being spoken. No one is trying to be funny in a distracting or off-putting way, and writer Andrew Bergman’s (who also co-wrote Blazing Saddles) influence is felt throughout.

The great casting extends to the supporting roles too. James Hong plays a flight attendant on a Wong Airlines plane, who has the job of explaining the plane’s safety procedure to Sheldon. When he proceeds to do so in Chinese, with all the glee and enthusiasm of any regular flight attendant, Arkin’s reaction is sublime. Richard Libertini takes on the role of a Central American military leader who;s part of the plot to ramp up global inflation. The actor was known for playing characters from all over the world thanks to his knack for accents. It’s certainly worth pointing out the simple but effective hilarity of his character’s gimmick: he childishly paints a face on the side of his hand, makes it drink water, speaks to it, and kisses Sheldon and Vince’s faces with it. Libertini, who died only earlier this year, is one of the best madcap elements of a very madcap film.

The quality of the image has been cleaned up nicely by Criterion. And there are some interesting interviews with people like Alan Arkin, Nancy Dussault, Ed Begley Jr., and James Wong, that add extra insight. The commentary, recorded in 2003, features Arthur Hiller, Andrew Bergman, Alan Arkin and Peter Falk. A booklet also shares Hiller’s recollections of making this film. The overall package should lead to more people discovering and appreciating The In-Laws for the great US comedy it is. This release might well turn out to the ultimate corrective to the disappointing reception of the film upon its initial release.