Anthology TV series are currently enjoying a minor resurgence, with the success of Channel 4’s Black Mirror, BBC2’s Inside No.9 and, in a looser sense, FX’s American Horror Story and HBO’s True Detective. But we’re still a far cry from the genre’s heyday (the 1950s to late-’80s), when shows like The Twilight Zone, Night Gallery, Outer Limits, Tales of the Unexpected, Night Visions, Amazing Stories, and Tales from the Crypt were popular.

Back in 1984, Night of the Living Dead legend George A. Romero created Tales from the Darkside for CBS, which ran for 90 episodes over four seasons, until cancellation in 1988. The series was inspired by the success of Romero’s Creepshow anthology horror film from 1982, but production company Laurel Entertainment couldn’t buy the rights to a straight adaptation from Warners Bros., so opted to create something very similar without infringing copyright.

Less known outside of its native U.S, Tales From the Darkside was successful enough to bankroll a feature-film, released two-years after the show was axed. In some quarters it’s considered the unofficial Creepshow 3—mainly because Darkside‘s vignette “Cat from Hell”, based on a Stephen King story, was originally intended to form part of Creepshow 2 until budgetary issues prevented its filming. There’s also a lot of cross-pollination with behind-the-scenes crew.

Tales from the Darkside: The Movie is directed by John Harrison (1st Assistant Director for Romero’s Creepshow and Day of the Dead), whose later output includes two Emmy-winning TV miniseries based on Frank Herbert’s Dune saga, co-producing his friend Romero’s Diary of the Dead film, and co-creating Syfy’s Painkiller Jane.

Like most horror anthologies, there exists a ‘wraparound story’ to frame individual vignettes and provide loose rationale for the stories being told. Weirdly, Darkside‘s narrative device is a half-baked update of Hansel & Gretel, where a suburban housewife called Betty (’80s pop-star/bad actress Debbie Harry) plots to eat a paperboy (Matthew Lawrence) she’s locked in her pantry prison. Luckily, the loquacious boy’s able to stall his grisly fate by reading aloud from a book Betty gave him to pass the time, ‘Tales from the Darkside’, which are dramatised as follows: 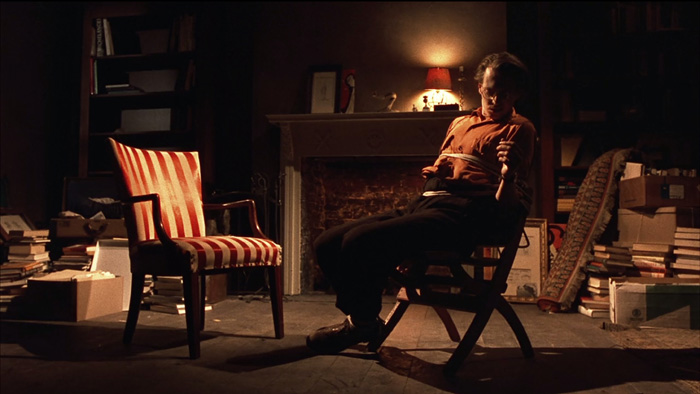 The first real segment of the film is an update of an Arthur Conan Doyle short story, adapted by Michael McDowell (Beetlejuice), which can’t avoid feeling outdated in terms of execution and silly concept. Here, nerdy grad student Bellingham (a pre-Reservoir Dogs Steve Buscemi) exacts revenge on two classmates who cheated him out of a scholarship–Susan (screen debuting Julianne Moore) and Lee (Robert Sedgwick)–by reanimating an Egyptian mummy and commanding it to murder them. Bellingham’s handsome buddy Andy (Christian Slater) gets involved with the resurrection ritual, although seeing as Susan’s his sister you have to wonder why Bellingham set himself up for a predictable fall. Indeed, there are plenty of logic issues within this segment, and the cliché of a reanimated mummy doesn’t elicit chills nowadays. Today, “Lot 249” amuses for the weirdness of seeing future Oscar-winner Moore involved in such a B-grade production. Although I must admit there’s a scene where the mummy sticks a metal wire up a victim’s nose, to pull out some brains (as ancient embalmers once did to him), which provoked a fair amount of sofa squirming. Of the three tales, it’s also the one with the best performances. 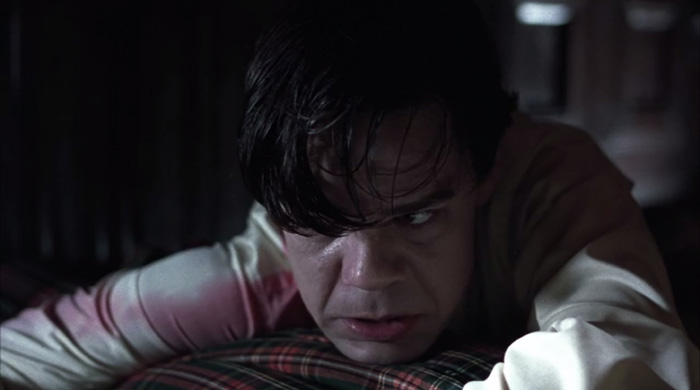 Coming from the mind of ailurophobic Stephen King (the script adapted by George Romero), it’s natural to expect great things from “Cat from Hell”. If there’s anyone who can turn a mundane pussycat into something terrifying it’s King. Here, a hitman called Halston (David Johansen—the cab driving ghost in Scrooged) accepts a $100,000 contract from wheelchair-bound elderly recluse Drogan (William Hickey) to kill a black cat that’s stalking his empty mansion. The pesky feline’s allegedly responsible for suffocating Drogan’s sister, then killing her friend and the family butler (Mark Margolis)… perhaps out of revenge for Drogan’s pharmaceutical company killing 5,000 cats during a drugs test? Half-amused, incredulous Halston accepts this apparently ludicrous request from a demented old bastard, but get more than he bargained for in his attempt to hunt down the murderous moggy. There’s fun to be had with this portion of Darkside, although Harrison struggles to make a small cat appear frightening on-camera (a sequence involving silly ‘cat POV’ shots don’t help), but there are memorable special effects of the cat jumping down Halston’s throat and curling up asleep in his belly. Created using pre-CGI mannequins and one well-trained, lubricated cat, that moment is both startling and amusing in equal measure. 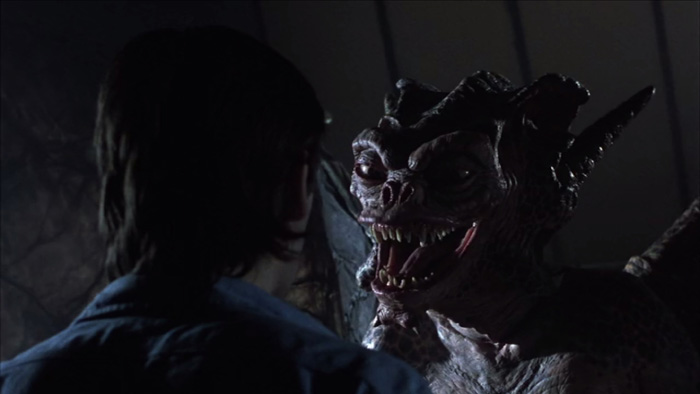 The final story is also indebted to the visceral prosthetic effects of the era, to create a gargoyle-monster that attacks a struggling artist called Preston (a pre-Dexter James Remar) and kills his bartender friend in an alley. Preston’s life’s spared, but he’s forced to make a vow (never tell anyone about his supernatural encounter), which is duly kept… for awhile, at least. Over the next decade, Preston’s miserable life quickly improves after falling in love with the beautiful Carola (Rae Dawn Chong), and fathering two children with her. That’s until he decides to reveal the unbelievable truth of what happened to him ten years ago. To say more would spoil the surprise, but I’d be shocked if you don’t guess the twist of “Lover’s Vow”—given one notable coincidence.

I later learned this story was based on the popular Japanese folklore of Yuki-onna (specifically a version of the tale written by Lafcadio Hearn), which lent credence to the story’s loose grasp of believable human behaviour. I had a tough time understanding why the creature wanted to spare Preston’s life, for example. Best to treat this one on the level of a camp fire horror story. Similarly to “Cat from Hell”, a lot of enjoyment comes from marvelling at the effects of the time—with the monster being a tangible costume, complete with bad lip-syncing, and a climactic transformation that’s body-horror gruesomeness at its most ’80s.