While “Primavera” isn’t as strong as last week’s season premiere, it deserves special notice for offering one of the freakiest images so far, in a show that gets freaky on a regular basis. Hannibal’s valentine to Will Graham (Hugh Dancy)—the body of his last victim gruesomely and meticulously contorted into an origami-like “topiary”—is grotesque enough, but Will’s hallucination of the meat-sack that used to be a person suddenly sprouting antlers and bone-limbs, slowly stalking him across the Norman Chapel, is disturbing even by Hannibal‘s high standards. I’ve seen friends and commenters compare it to Silent Hill, so I guess it makes sense I was reminded of Frank’s resurrection in Hellraiser. So, a bit of Silent Hill, a bit of Clive Barker, and a whole lot of Jesus-Christ-this-thing-is-going-to-make-appearances-in-my-nightmares. It’s the most disturbing incarnation of the stag (or Wendigo) that serves as Will’s projection of his relationship with Hannibal yet, and a reminder that, on a show about an iconic monster, the inside of the hero’s mind is usually the scariest place to be. 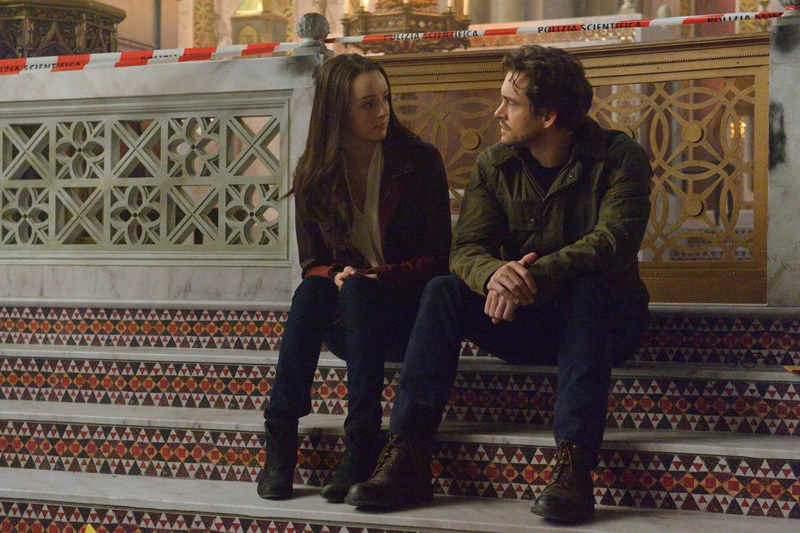 After a review of the devastating final minutes of last year’s finale, culminating in a literal river of blood, we rejoin Will’s story as he’s waking up in a hospital bed, badly wounded but still alive. The show is still teasing out answers as to the fates of the other principal characters left hanging last year, save one (spoilers ahead). I’ll confess that, when Abigail Hobbs (Kacey Rohl) walked into Will’s room, I assumed what apparently played for many others as a twist—that the young woman Will once saved, only for her to end up under Hannibal’s control, hadn’t really survived. Even by the show’s brazen (and much appreciated) disregard for “realism”, for Abigail to have survived having her throat slit a second time would require a major suspension of disbelief, so I was relieved she was revealed to be a manifestation of Will’s guilt and his conflicted feelings about Hannibal, whom he’s pursuing despite wondering if he’d have been better off running away with the doctor. Knowing the twist was coming didn’t hurt the episode, though—it felt like something we were meant to realise at our own pace—and the episode’s final scene between Dancy and Rohl was devastating and beautifully performed by both actors.

Much of “Primavera” takes place eight months after Hannibal’s escape, with Will pursuing him in Italy, but the show has clearly broken from any aspects of the weekly procedural format that it relied on in its first season. Much more time is devoted to conversations between Will and Abigail (which is to say, Will talking to himself*), that find Will indirectly trying to put the pieces together by ruminating about God and metaphysics. Admittedly, Hannibal’s philosophical dialogues always walk a fine line between thought-provoking and ponderous, and Will and Abigail talking about whether Hannibal is God, or wants to be God, or would like God if he got to know him, tend towards the latter. It works as a great contrast with last week’s more lively episode, though, with our empathetic hero having a harder time than ever getting out of his own head; while Hannibal, wounded though he may be by his friend’s betrayal, is still living it up. (As Will reminds us, Hannibal is always at least partly acting out of his own sense of amusement). 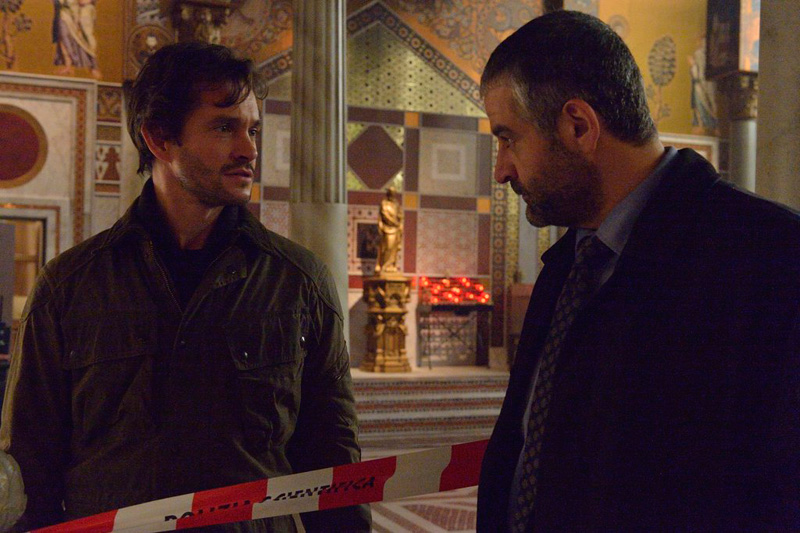 For all of the things “Primavera” gets right in reacquainting us with Will and his tortured headspace, it was when the episode briefly went into plot-advancing mode that it didn’t work for me, albeit for specific reasons I could be completely wrong about. Specifically, there was something off about the introduction of Inspector Pazzi (Fortunato Cerlino), a character from the novel Hannibal who once let Dr. Lecter slip through his fingers. It’s interesting to introduce the character in this context, and I’ll be interested to see where the show takes him (he meets a particularly grisly end in the book and film). The thing that distracted me is that—and I could be mistaken, as I haven’t been able to confirm this—I noticed early on that much of Cerlino’s dialogue appears looped. Once I noticed it, I couldn’t help noticing what what I assume was an attempt to hide the ADR, resulting in awkward editing, as nearly all of Pazzi’s longer scenes with Will are played off the wide shots and Dancy’s reactions, with only brief closeups of Cerlino. It’s a nitpick, but I found it hard to connect with Cerlino’s performance as a result.

Outside of that, the season’s first two episodes have set up a number of promising paths that the rest of the story could take. Fuller and the show’s writers continue to make smart, thematically appropriate nods to this year’s Europe-set horror movie antecedents, with Don’t Look Now quoted more than once (most explicitly in the ending’s slow chase, with its fearfully still sense of dread). It’s a fitting touchstone, given the hour’s preoccupation with grief and the repercussions of past trauma. While it’s a more somber episode than the premiere, I suspect it’ll prove to be a necessary one from a character perspective.

We’ve seen how Will and Hannibal respond differently to their post-breakup’s unresolved issues; and really, isn’t a man-meat sculpture Lecter’s version of a vaguely-worded Facebook update, meant to catch the attention of an ex whom you know’s looking? I’m fine with Hannibal taking its sweet time, plot-wise, but I must say that I really can’t wait until these two get back together.

*Unless Abigail was a ghost, as one brief moment seemed to suggest.