The marketing for Suicide Squad has been selling a film that, unfortunately, isn’t the one we got. With bright, lively colour in the posters and humour prioritised in the popular trailers, it was easy to get excited about DC Comics’ latest. This isn’t the subversive superhero movie you’re expecting. In the end, Suicide Squad doesn’t break new ground for the well-trodden superhero genre; it’s risk-averse, familiar, and even cheesy.

You’ve seen the tagline. This film is about the “Worst. Heroes. Ever”. Its core characters are supervillains taken from jail and forced to work for the government. The closest it has to a lead is Will Smith as Floyd Lawton/Deadshot, a lethal assassin/sharpshooter. He’s joined by the wild Harley Quinn (Margot Robbie), a character defined by her co-dependent relationship with The Joker (Jared Leto). They become part of a team, dubbed ‘Task Force X’, along with the fiery El Diablo (Jay Hernandez), Aussie thief Captain Boomerang (Jai Courtney), and the monstrously deformed Killer Croc (Adewale Akinnuoye-Agbaje).

We learn almost all backstories during the long-winded twenty minutes of exposition the film opens with. Amanda Waller (Viola Davis) is putting together this team and has to explain who they are and how she captured them. This is important so we understand why the team exists and understand Waller’s view that America needs Task Force X to combat supernatural threats. But it’s still a sequence that drags on painfully and nothing about it feels natural. 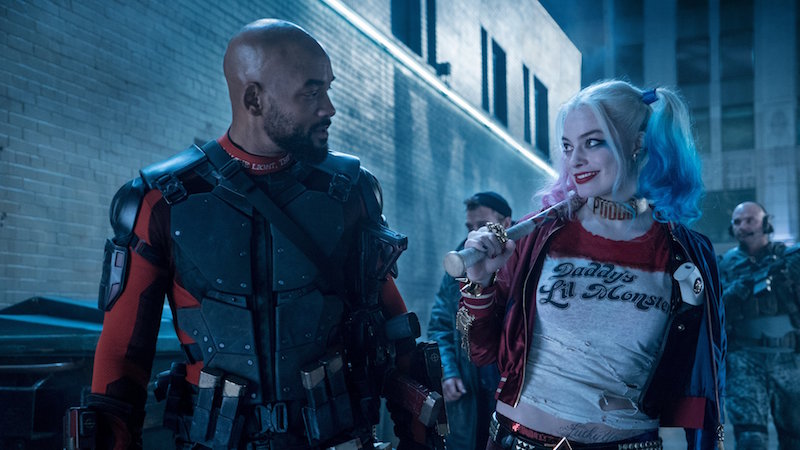 It’s here that we also get cameos from other corners of the DC Comics Extended Universe (DCEU), with Batman (Ben Affleck) and The Flash (Ezra Miller) apprehending bad guys. While it’s fun to see Affleck and Miller in their roles, it still feels like this version of Batman doesn’t work as well as the character should. Also, Miller’s cameo is too brief and poorly edited to be necessary. It’s the one scene in the film shot by Batman v Superman’s Zack Snyder, and you’ll notice how The Flash doesn’t appear onscreen with any other character. It just feels sloppy (more on that later).

Once you’ve got through that expository opening, the film finally gets going. A project managed by Waller goes wrong, unleashing the power of Enchantress on Midway City, so she orders Colonel Rick Flag (Joel Kinnaman) to head up Task Force X and clear up the mess. Oh, and the ancient witch Enchantress is also possessing Dr. June Moone (Cara Delevingne), who happens to be Flag’s girlfriend.

Director David Ayer (Sabotage, Fury) is best known for making street crime thrillers, and he tries to bring some of that flavour to Suicide Squad. He struggles, though, especially as he’s never able to pull off a comic book tone with his gritty approach. Much of the dialogue here is also ridiculously cheesy. It’s left to Will Smith to deliver some of the worst lines. “We’re some kind of suicide squad,” Lawton says in an early cringeworthy moment. And later on, he reminds everyone, “don’t forget: we’re the bad guys”. You’ll have noticed some of this stuff in the trailers, but it sticks out like a sore thumb in the finished product.

Where Suicide Squad does feel refreshing is in its comfort with comic book story beats. There are a couple of things that need a little more explanation, but I appreciated how this is so unashamedly geeky throughout. It doesn’t feel the need to unravel every instance of magic or superpowers, trusting that the audience will understand and keep up. It also doesn’t waste its time with introductions for The Joker or Batman, realising we know those two very well by this point. 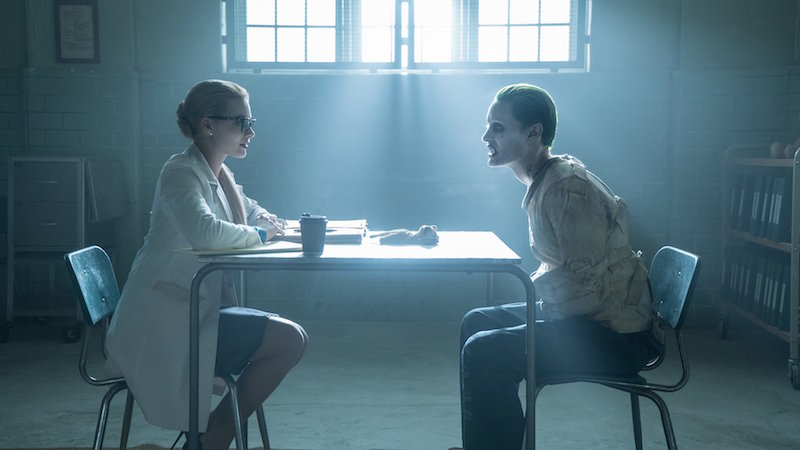 In general, Suicide Squad gets things right for its large ensemble. The performances from most of the cast are solid. Only Delevingne lets the side down with an unconvincing turn as the villain of the piece. Viola Davis makes for a much better antagonistic force as Waller, and she’s very compelling in the role. Smith and Robbie impressed in last year’s Focus, and they do so again in their leading roles here. And while there’s definitely not as much humour as those incredible trailers suggested, Jai Courtney and Robbie do a good job with what there is.

The best performance is from Jay Hernandez as El Diablo (real name: Chato Santana). His character is reluctant to use his flame-throwing powers, always fearing the destruction he could cause. Although every character has a tragic backstory, his is the most powerful and moving. Ayer loves his flashbacks and fills the film with too many of them, but seeing the reason why Diablo wants to stay out of the fight is well worth it on an emotional level.

What isn’t as effective is the backstory for Lawton. The film isn’t able to balance that he’s a loving and doting father at the same time as being a ruthless killer. Something just feels off. This is particularly true for the scene where Waller orchestrates his capture to get him into prison in the first place. The twisted love story between Harley Quinn and Joker is more convincing. For all his weird on-set antics, Leto pulls off an interesting and memorable interpretation of the character too. And The Joker being head-over-heels in love feels like something we haven’t seen from this supervillain before. The dynamic is captivating and The Joker is a proven master of anarchy, but he’s also hardly in the film (Leto has already said how upset he is about so many of his scenes being removed from the final cut).

While it’s easy to like the gloriously weird Harley Quinn and Robbie’s portrayal of her, there are also issues with this fan-favourite character that are hard to ignore. Suicide Squad’s handling of her is very superficial and she doesn’t get a chance to really develop. At a certain point it becomes clear she’s being treated as the film’s eye candy, and that’s uncomfortable. It’s always a bit baffling why she doesn’t wear many clothes while everyone else does, but Ayer’s camera lingers and leers at her body too. It’s not in a way that emphasises her power over men, it’s one that makes it evident this is an attempt to titillate the young male audience. 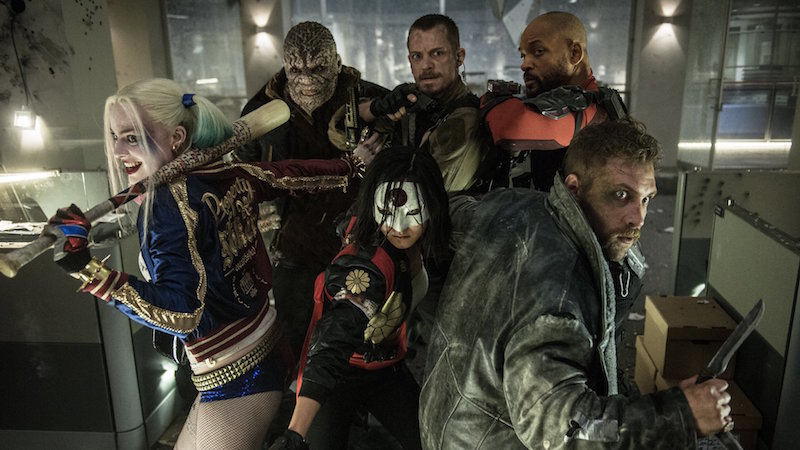 The greatest of all Suicide Squad’s failings is that so much of it just doesn’t make sense. A poor villain and the presence of a typical ‘big weapon’ to stop from destroying the world weaken the narrative, too, as they’ve become very tired superhero tropes. The action is standard stuff, but it’s worsened by the darkness of the colour palette. In some scenes, it even looks like dust particles are clouding the lens and obscuring the view. Much of this is incoherent and shoddy, and it’s easy to see that the rushed production hasn’t paid off.

While it does have some of the same issues as Batman v Superman, Suicide Squad doesn’t falter in all the same ways. One thing clear about both projects is that there was a mix of visions and a lot of behind-the-scenes disagreement and tinkering. You can tell it’s over-edited and cut to death, with much of the material for The Joker now missing. This isn’t as much of a drag as the shambolic Batman v Superman, nor as disastrous as last year’s Fantastic Four (the gold standard of unsalvageable blockbusters). However, Warner Bros. clearly used reshoots and edits to bring the tone of those widely-praised trailers into the finished movie, and it hasn’t been a success.

After the tepid response to Batman v Superman, Warners are bound to be worried about the development of the DC Extended Universe. It’s hard to escape the feeling that there’s a course correction happening here, but it hasn’t worked in Suicide Squad. This film feels muddled and messy, stumbling through the motions without a sense of purpose. It has its strong moments, handles characters well, and highlights some strong performances, but it’s maddeningly edited and needed a fresh re-write. If you’re expecting the bright, edgy film sold by the year-long marketing campaign, please lower your expectations.