I knew very little about Trudie Styler, beyond her marriage to Sting, before seeing she’d made her directorial debut with Freak Show. Having looked further into her career, it’s apparent she’s a highly talented and multifaceted woman who’s clearly driven in everything she does. Very much a jack of all trades, Styler’s had acting parts on stage and scree, as well as having produced numerous projects, and even found time for charity work. It’s hardly surprising it’s taken her this long to finally step into the director’s chair.

Styler is, of course, far more than just ‘Mrs. Sting’, and Freak Show affords her the opportunity to tackle an inspirational and challenging story many can relate to, especially in today. Despite the source material being over a decade old, it’s hard to argue against James St. James’ novel being more relevant now than it ever was. It’s almost surprising that it took this long for Freak Show to become a movie, but you can see why. It’s a story that deserves sensitivity and a gentle touch, and thankfully that’s what it gets with Styler at the wheel.

Is it as good as the book? No, but that’s rarely the case with any literary adaptation. The real question is: is it worth watching? I’d say yes, even if it doesn’t quite get everything right.

Styler’s movie isn’t as scary or violent as the similarly titled American Horror Story: Freak Show, but funnily enough there are similarities at the heart of both tales. The challenge of being different in this world, treated like an outcast and trying to live your life as you want. It’s about learning to love yourself and hoping others will follow, but also realising that outside acceptance isn’t the be all and end all. You may recognise lead Alex Lawther from TV appearances in Black Mirror and The End Of The F***ing World, but he’s a million miles away from those characters here.

Lawther he plays Billy Bloom, a gay teenager who gets bullied by the ‘cool kids’ but is far more interested in following in his mother’s footsteps than trying to be like them. Did I mention his mother’s played by Bette Midler? I think we’d all like to be like her. 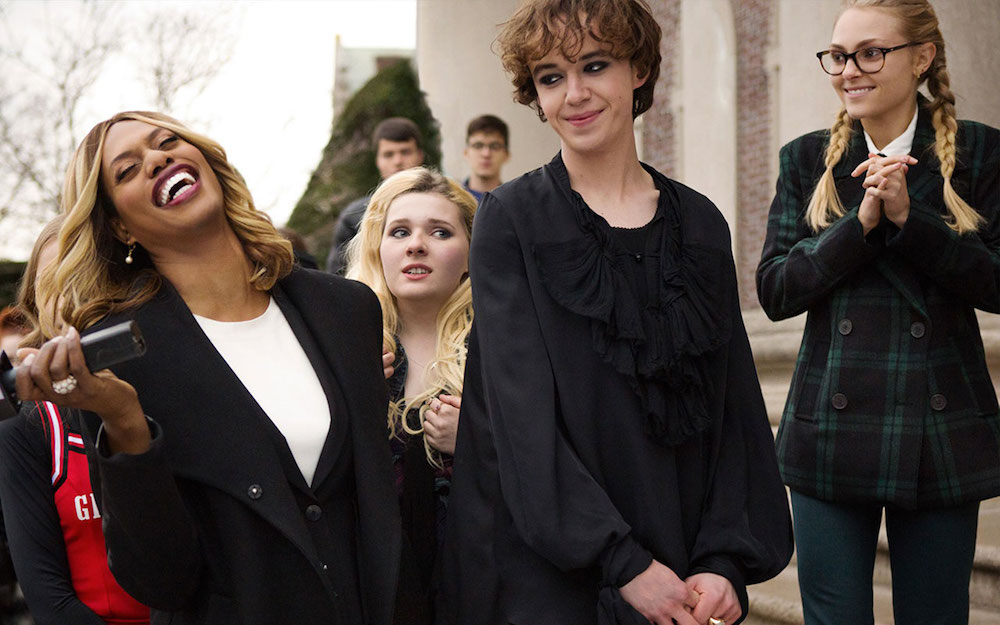 Billy is content to see himself as a ‘freak’ and embraces all his differences; so much so that he decides one day to run for Homecoming Queen. Well, why not? It’s a brave attempt at celebrating all things different and showing the world that it’s okay to be you. It’s like a modern day Carrie (1976), but much less bloody. There’s a retro feel to the film that isn’t that surprising considering the age of the original story, but so many parts are still relevant and important issues today. It’s nice to think that we’ve become a more accepting and liberal world, but the reality is that plenty of the bullying and judgemental behaviour portrayed in Freak Show is highly prevalent in schools and into adulthood to this day.

Billy’s flamboyance and downright refusal to change to please others makes Freak Show a cut above your average high school movie. It’s not perfect and it does suffer from distracting direction and muddled tone, but on the whole Lawther anchors the movie very well and makes it worth sticking with. Billy’s friendship with Flip (Ian Nelson) is one of the more predictable parts of the story, but it still works and it’s hard to begrudge his character a little happiness. Much like a surprise cameo that seems utterly random, but raises enough of a smile to be forgiven.

There are moments of potential brilliance here, but you end up feeling like Billy is better than the story he’s part of, and Lawther is much better than the film deserves.

Billy isn’t for everyone, and to be honest it’s quite difficult to like him at times despite him being the victim of pretty horrendous bullying. Lawther is up to the challenge of playing such a diverse and inspirational character, however, playing him with irony and good humour in ways many wouldn’t be able to pull off. There’s just something about Alex that makes him connect with audiences, absorbing you into his every performance. He has so much untapped potential you can’t help but feel his role in Freak Show is barely scratching the surface of what he’s truly capable of. If there’s any justice in the world, Alex Lawther’s a name you’ll be seeing everywhere in years to come.

While Styler’s first stab at directing isn’t a home run, Freak Show is nevertheless an enjoyable and meaningful story that I’m sure will resonate with many young people. Lawther makes it a film worth catching, as well as getting to see Bette Midler be Bette Midler. The supporting cast, including Abigail Breslin, AnnaSophia Robb, and Laverne Cox, all do decent jobs with what they’re given, even if the material’s a little stereotypical and predictable. Freak Show’s unlikely to become anyone’s favourite movie, but there are worse ways to spend 90-minutes.