After making what’s possibly the greatest British gangster film, Get Carter (1971), Michael Caine and Mike Hodges had built such a rapport as star and director, that they knew they had to work together again. Hodges called upon a third Michael, producer Michael Klinger, and asked for suitable scripts to be sent his way. He and Caine read several, but none struck a chord between them so, after some discussion, Hodges decided to write one himself…

He’d previously written a couple of episodes for ITV Playhouse and one of these, Rumour (1970), followed a seedy gossip columnist and used a voiceover to juxtapose what was being reported with what was seen to be happening. He liked the potential of this narrative device and recalled Michael Caine’s ‘Jack-the-lad’ character, talking directly to screen in Alfie (1966). He began developing an idea about an author of lurid fiction being hired to ghostwrite the biography of someone famous who may well have skeletons in the closet… 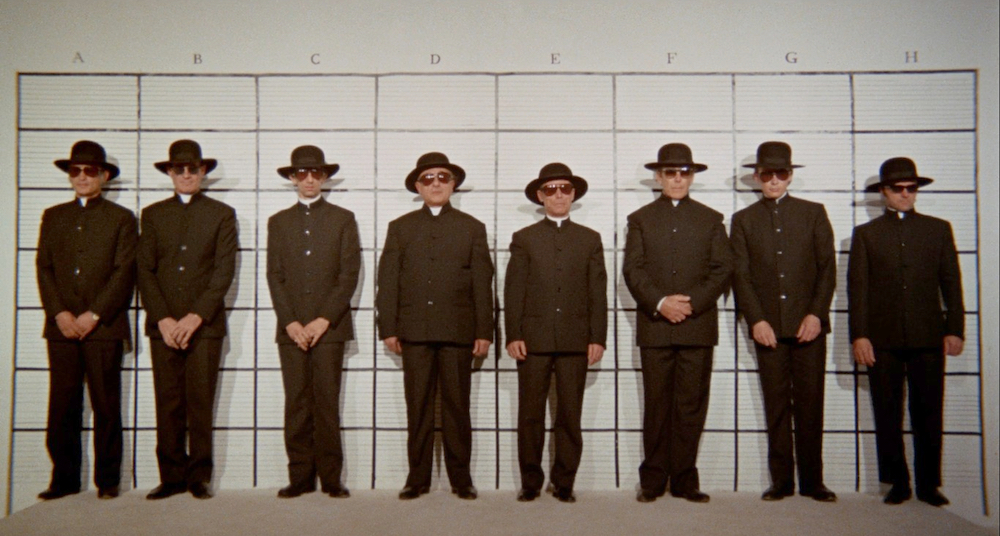 At the time, Hodges was dismayed to see fascism regaining strong support in the 1971 Italian elections. He could hardly believe it possible, with nearby Spain still under the totalitarian Franco regime, and the horrors of World War II still in the living memory of those voters… It recalled the Wilma Montesi case that had scandalised Rome just prior to the elections back in 1953. He decided to write a story loosely based on the famous case that could also be read as a political satire.

Montesi was a young woman whose dead body was found on a beach in suspicious circumstances. The police quickly closed the case as accidental drowning, and if it wasn’t for the Italian tabloids sensationalising things, it would have passed without much note. As it happened, the case exploded across the headlines and soon the girl’s death was being linked to high-ranking officials, minor aristocracy, and politicians. It rapidly became ammunition for political manipulation and ‘mud-slinging’. 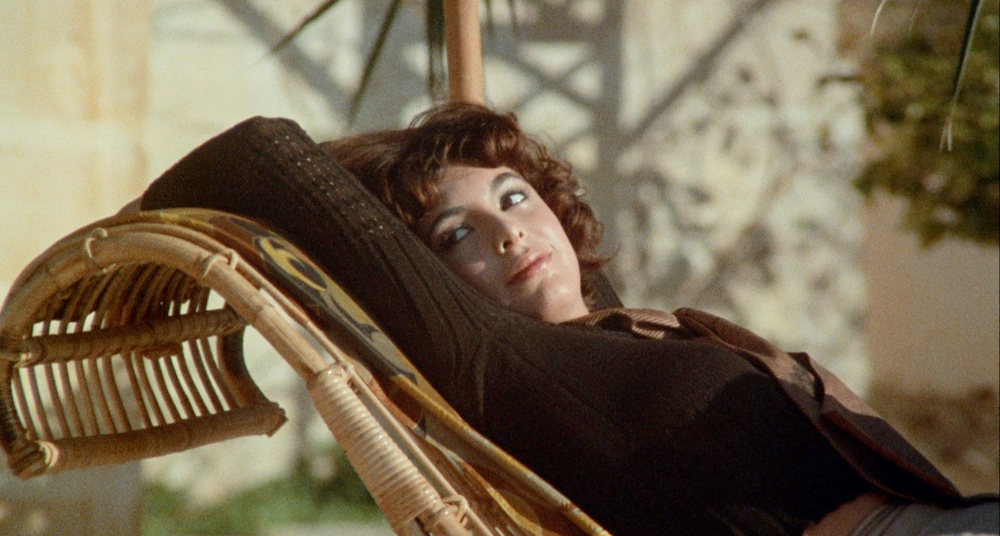 The ensuing journalistic investigations uncovered a deep web of corruption running from street level drug-trafficking and prostitution, to government-level corporate crime involving several prominent dignitaries. Despite a flurry of resignations, arrests and trials, there was never a satisfactory conclusion to the Montesi scandal and the cause of death was never proven to be anything other than accidental. The case is said to have inspired Federico Fellini’s La Dolce Vita (1960) and its reverberations can be felt throughout the Giallo genre, perhaps most palpably in Sergio Martino’s The Suspicious Death of a Minor (1975).

For such a serious starting point, Pulp works very well as a comedy… if your sense of humour is pretty dark and irreverent! It’s certainly not all laughs and the brief sequence filmed at a real boar hunt is downright harrowing. It could easily have been approached as a straightforward thriller and, along with the fantastic Maltese locations, this would probably have better sold it to the distributors. This unusual fusion of thriller and satirical comedy also confused audiences of the time, so Pulp never got the mainstream recognition it deserved.  It’s great to see it now getting the respect of this Blu-ray release from Arrow Films. 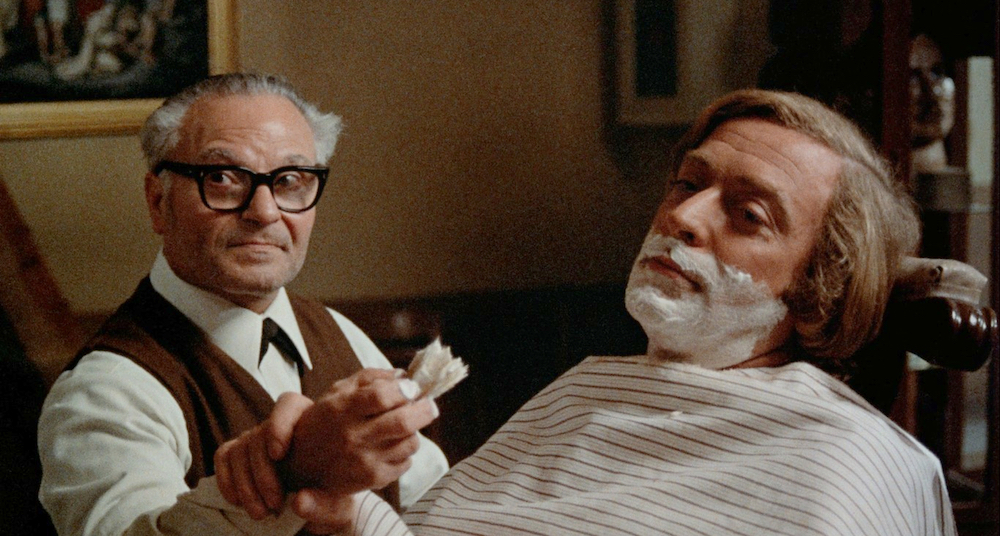 Much of the humour is born of Caine’s deadpan delivery and subtle physical acting in an excellent, self-depreciating performance as ‘Mickey’ King, the prolific author with many pseudonyms. His voiceover, giving the pulp fiction version of events that are often far more mundane, works very well indeed, and complements his understated performance—a perfect foil to the larger-than-life theatrics we get from Lionel Stander and Micky Rooney.

Mickey Rooney started his career as a child actor in the 1920s and showed a precocious talent for comedy, musical and dramatic roles. He gained wider recognition for starring opposite Spencer Tracey in Boys Town (1938), and became the first Oscar-nominated teenager, for Babes in Arms (1939). His transition from child to adult star was problematic and much of his adult life was troubled by addiction, failed marriages and bankruptcies. One of his notable adult roles was as Baby Face Nelson (1957) in the biopic of the notorious gangster. 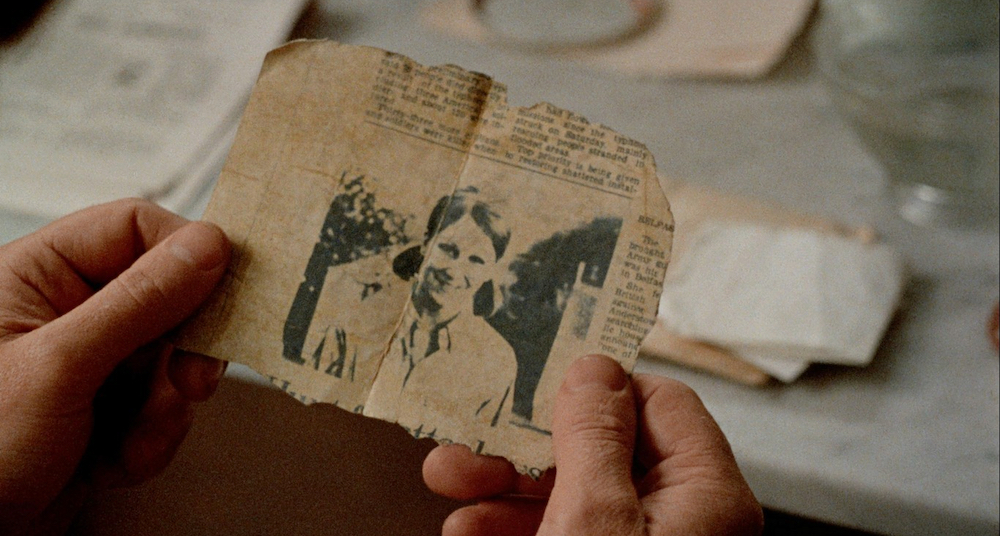 Casting Rooney in Pulp as the Hollywood has-been and mobster ‘wannabe’ Preston Gilbert, was no accident. His presence makes sense and hints at the film’s meaningful meta-casting: the overblown vanity of Gilbert, that he uses to battle the increasing despair of the once adored, now ridiculed, falling star is something that Rooney had experienced first-hand, more than once. He plays Gilbert as vain, hateful and manipulative, but also manages to convey something of the underlying pain, giving him a ‘human’ heart that the character works hard to hide, perhaps even from himself. It’s an overly brash portrayal, with some clever subtleties.

Although it takes a while to scroll down a filmography spanning 65 years, many people of a certain age will know Lionel Stander simply as ‘Max’, from the Hart to Hart TV movies. Perhaps fewer remember him for his overt political activism and as a founder member of the Screen Actors Guild which got him blacklisted in the late 1930s by Columbia Pictures. In the 1940s, his strong stance against McCarthyism and the House Un-American Activities Committee (HUAC), resulted in another Hollywood blacklisting that lasted until 1965. Not only does he do a great job as Preston Gilbert’s henchman, his presence is already commenting on themes of political power being corrupted by mobster mentality and corporate pressures. Admittedly, this meaning would be entirely overlooked by much of the audience, but is part of a subtext that adds value to a film that might otherwise be viewed as a fossil of its cinematic era. 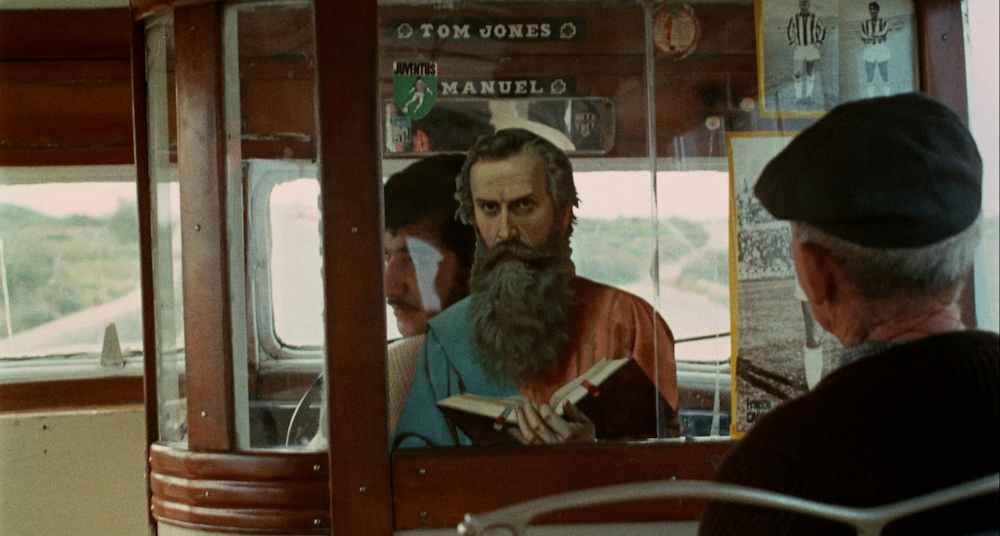 Pulp was also a comeback, of sorts, for Lizabeth Scott, being her first big-screen role since the 1950s, and harks back to her stature as a Hollywood leading lady in playing Betty Cippola, a possibly ‘fake’ Princess and wife of a prominent politician. She’s a crumbling beauty who desperately flaunts and flirts, using her charms to keep a grasp on some portion of power, albeit through the masculine proxy of her husband. Although Pulp is very much of its time, and gender representations will seem outdated to modern eyes, the exploitation and suppression of women is a definite theme that runs through it. It was Scott’s final role.

Pulp introduced Nadia Cassini to international audiences in the female lead as ‘sex-kitten’ Liz, kept by Preston Gilbert as a pretty trophy. Cassini’s striking good looks could easily have carried the part and she also contributes a layered performance, partly putting on the ’70s sexpot act, and then revealing depths beyond the stereotyping. Her expressive ‘face acting’ really helps the credibility of her leading men and it is surprising that she only went on to make one other English-language film, Starcrash (1978), a gloriously cheesy American-Italian sci-fi co-production. 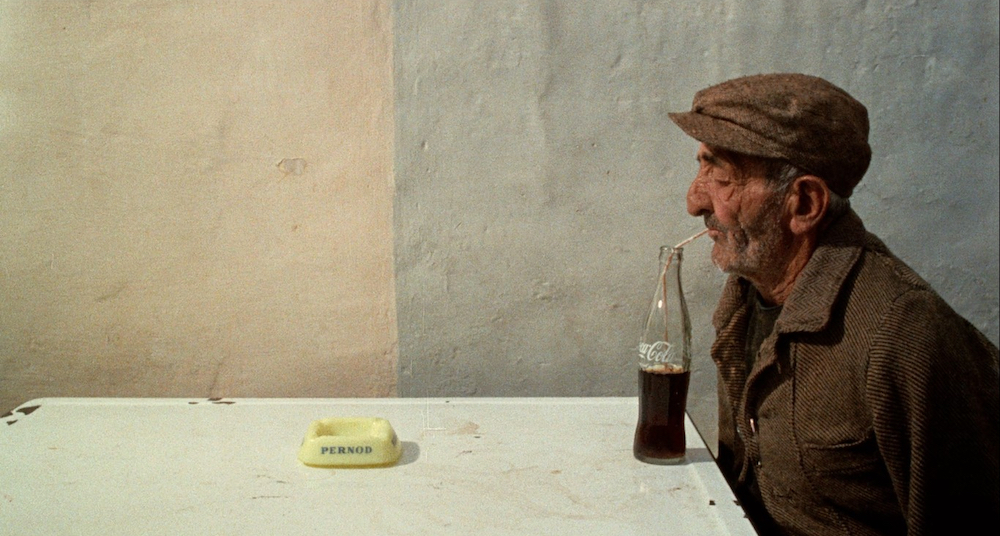 Perhaps the most meaningful piece of Pulp’s meta-casting is that of Italian actor Luciano Pigozzi in a brief cameo as a clairvoyant who holds some key clues. In his beige raincoat, he looks more like a crumpled detective from a typical Giallo or Poliziotteschi, as if he had just wandered in from All the Colors of the Dark (1972), or The Case of the Bloody Iris (1972), whilst on his way to Seven Deaths in the Cat’s Eye (1973). He was a familiar stalwart of 1970s Italian pulp cinema.

Often, Michael Caine in Pulp seems to be playing an Englishman lost in Giallo-land. There are plenty of gialli signifiers: a mystery that gets more complicated as the protagonist nears a solution, a murder with impossible or inexplicable elements, false clues and red-herrings to mislead the audience. A complex plot that uses the exploitation of the powerless by the powerful as a broad socio-political metaphor. Also, great use of location and inventive camera work. 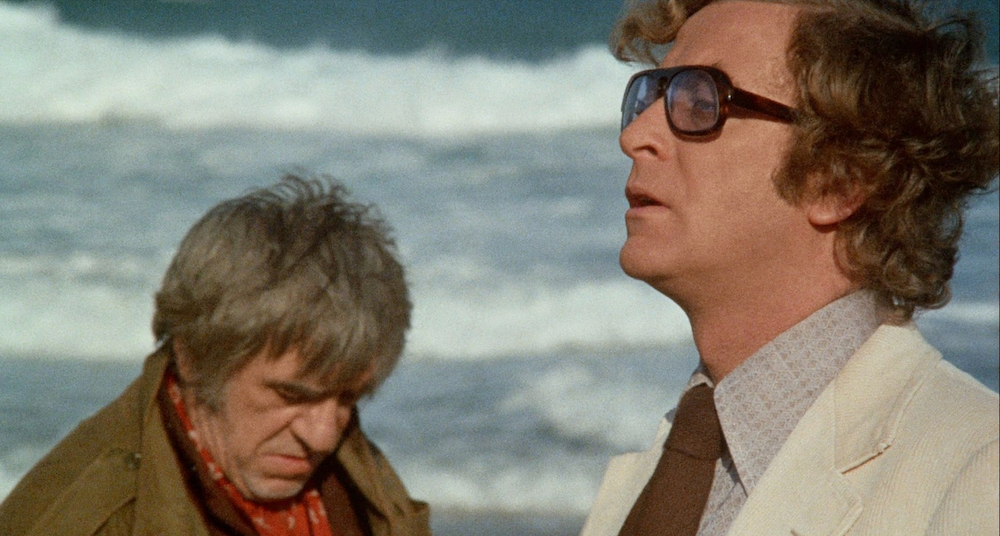 The technical craft of Pulp is brilliant—if judged on this alone, it would merit a five-star rating. As the first feature film for Ousama Rawi, Pulp was his calling card as a cinematographer and he really pulls out all the stops to make an impression. The location lighting is innovative and effective throughout, from difficult interiors to dazzling daylight, he really makes the most of Malta as a backdrop. Working closely with Mike Hodges, he ensured that every frame is either perfectly composed and balanced, or interestingly offset. There are some really tight close-ups, lit as character portraits, and a few very wide shots that use architectural structure, shadows and the movement of many extras in strong formal constructions.

There is a lot of purely visual humour that makes full use of the medium. One of my favourite moments involves King travelling by bus, with a goat nuzzling his nethers, whilst he tickles the cock (as in male chicken) of a fellow traveller. All the while receiving suspicious glances from the driver, over the shoulder of a cardboard cut-out religious icon, with a stern beard and judgemental stare. Goats become a recurring motif.

As a cinematic experience, Pulp is a beautiful thing to behold. Films from that era rested solely the craft of cast and crew. Dialogue was delivered and not reduced to a series of quick-cut sound-bites. The visual impact relied on solid cinematography, not digital post-production. The pacing was sympathetic to the material, not a battle against the dwindling attention-span of audiences. Compared to mainstream movies of today, Pulp seems like a European art movie. And that’s no bad thing!

The ultimate appeal of Pulp does rely on its comedy. As with all funny movies, that relies on the viewer’s own sense of humour, and a willingness to allow for its ’70s sensibilities. I was absorbed by the film from start to finish, grinned through much of it and laughed out loud several times. I also enjoyed the thriller elements and well-crafted plot. For me, anything with plenty of Michael Caine screen-time is a worthwhile watch… and I’m pretty sure Jarvis Cocker would agree. 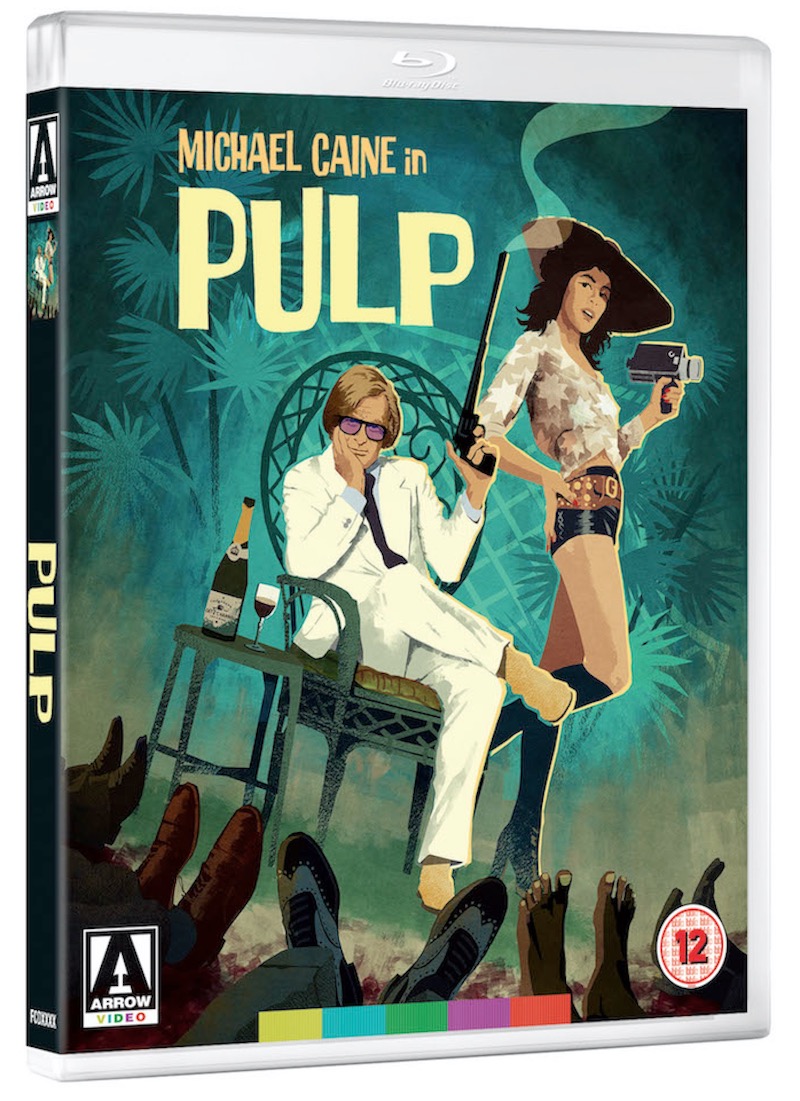