Now entering the final half of Star Trek: Discovery’s second season, “Light and Shadow” didn’t have a particularly strong story, but it was a necessary way to feed us more information and reorient the season towards its final destination. That’s not to say it wasn’t enjoyable, as there were enough incidents and fun character moments to make the hour pass by pleasantly, but you won’t be returning to it anytime soon.

The episode was split into two storylines. The least entertaining but arguably more important was seeing Michael (Sonequa Martin-Green) take personal leave to return home, to Vulcan, where she was reunited with her mother Amanda (Mia Kirshner) and quickly realised the whereabouts of Spock (Ethan Peck) has been known to her all this time. Amanda’s fugitive son has been hidden away from Sarek (James Frain) and Starfleet in a temple that can block Vulcan psychic connections, but when Michael finds him she’s surprised by the extent of his mental break.

“Light and Shadows” gave us the long overdue debut of this younger Spock, but he’s not the character we know from Leonard Nimoy’s indelible portrayal or even Zachary Quinto’s alternate version. This disturbed Spock is mumbling the First Doctrines of Logic over and over, together with a sequence of numbers Michael believes could be integral to understanding something about the mysterious red signals in space. 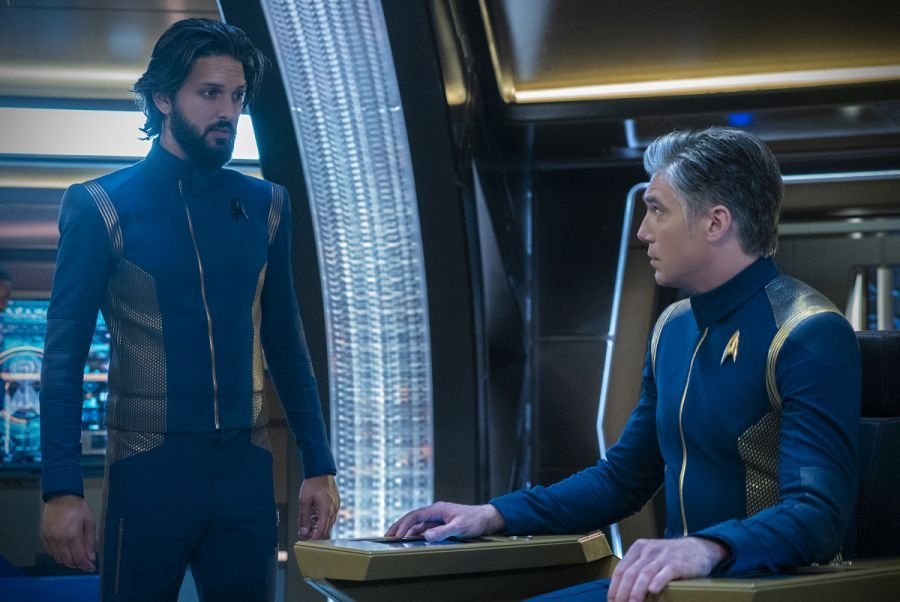 It was great to finally see Spock on the show, although I remain unconvinced Discovery needed to tie itself into such an iconic character in this way. It continues to feel unrealistic that Spock and his family never mentioned Michael during the course of 79 television episodes and numerous film appearances, but maybe the writers will come up with a plausible explanation by the time Discovery ends. Incidentally, the show has been picked up for a third season this week, so that won’t be for a while longer. However, here we are, and it’s at least interesting to have the show flesh out the overlooked character of Amanda, who’s lived her entire adult life amongst Vulcans and has therefore struggled to nurture Spock in the way that comes naturally to her as a human with emotions. We also learned that Spock has the Vulcan version of dyslexia, too.

Ultimately, Sarek finds out about his wife’s deception and Spock is sent to Captain Leland (Alan Van Sprang) in Section 31, who immediately set about trying to extract information from his addled mind, necessitating a rescue from Michael with assistance from Georgiou (Michelle Yeoh). Section 31 continues to be the least interesting new aspect of season 2, sadly, as it just seems like a lazy way to keep Georgiou involved in Starfleet without having her locked up forever – seeing as she was a tyrannical dictator of an Empire in the Mirror Universe, after all. It’s stupid that she’s been given a high ranking position in Starfleet’s covert black ops unit, but I could live with it if there was just something more interesting at work in this storyline.

A seed was planted that Leland is responsible for the death of Michael’s human parents, something Georgiou knows and is using as leverage over him, but I don’t care about any of that… yet? Michael has barely mentioned her human parents, so I don’t feel like their death is a foundational tragedy that informs her character from the ground up, and we don’t know Leland very well as a person, so it’s hard to feel anticipation for when this secret gets out. 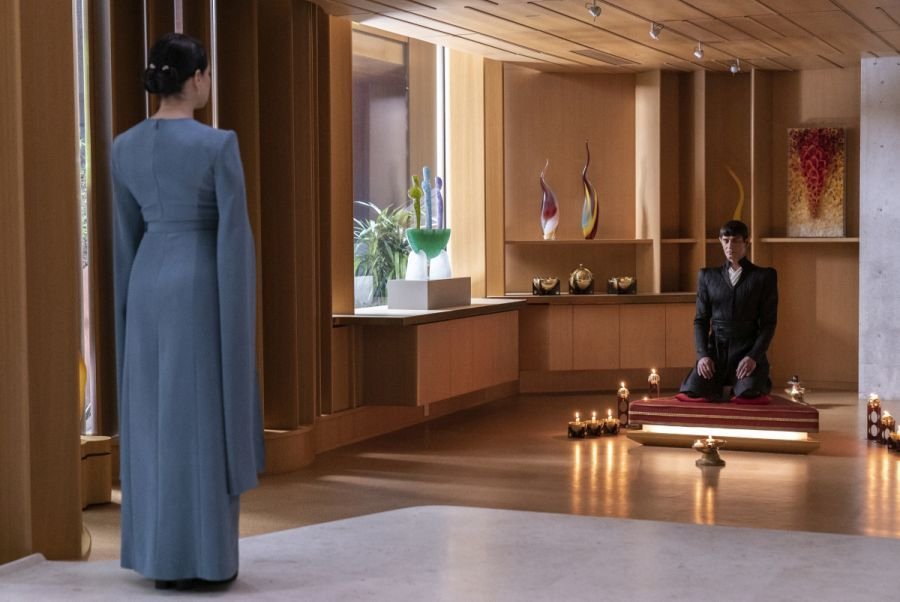 The other half of the episode was more entertaining and action-orientated, but it elevated expectations only to dash them. The USS Discovery encountered a “time rift”, which resulted in cool temporal distortions on the Bridge with Captain Pike (Anson Mount) seeing echoes of his recent past. Then he piloted a shuttlecraft with Lt. Tyler (Shazad Latif) into the time rift to explore it after sending a probe in, believing it might be linked to the Red Angel figure they think comes from 500 years into the future. Given the setup for something very cool and mindbending to occur, with Pike glimpsing a look at his near-future pointing a phaser at Tyler, the storyline ultimately fizzled into nothing.

Instead of giving us a classic Trek episode about time travel and temporal distortions, all that happened is Discovery’s probe returned to latch itself onto the shuttle, having apparently been “upgraded” and sent back through time to connect to their data bank. Stamets (Anthony Rapp) mounted a rescue because his tardigrade DNA means he’s less susceptible to temporal anomalies, and the mission was over after a self-destruct seconds before an emergency beam out.

I guess we learned that the Red Angel comes from an advanced civilisation half a millennia in the future, but it just seemed a wasted opportunity to do something cooler. There was also some perfunctory interaction between Pike and Tyler – with the latter questioning his captain’s commands, believing his macho attitude is fuelled by guilt over missing the Federation-Klingon War – before they came to an inevitable understanding of each other. 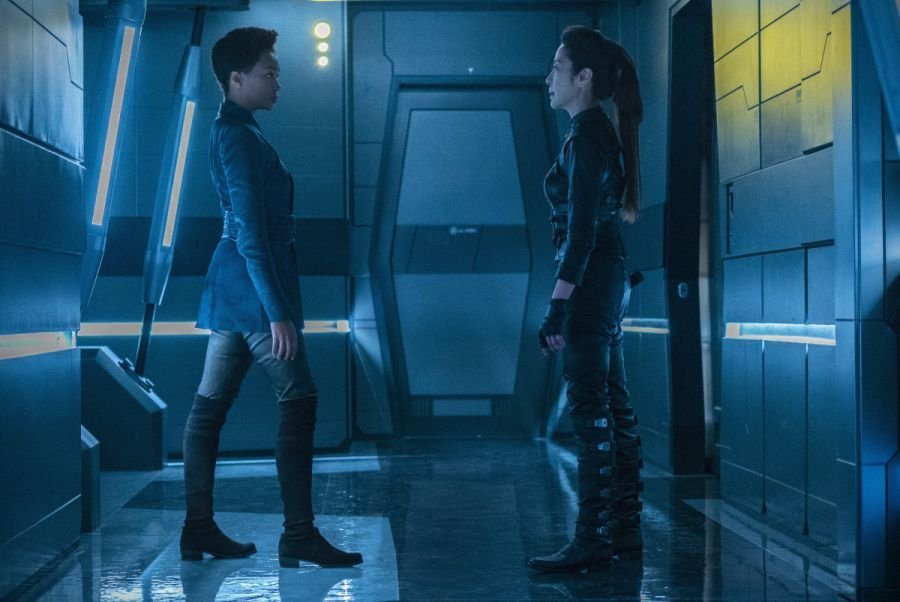 In some ways, it was where the episode ended that was of most interest. Michael is risking her career by freeing Spock, but she’s determined that the sequence of numbers he keeps repeating and coordinates – nobody thought to check that before her? Even stranger, they’re coordinates that point to Talos IV, which Trekkers will perhaps remember is the planet Captain Pike was being held captive on in Star Trek’s originally unaired pilot, “The Cage”.

Knowing that his character can’t stay on Discovery for the long haul, it now seems like this season is going to be explaining the exact circumstances that lead into “The Cage” story. And it also seems the Red Angel has infected Lt. Cmdr. Airiam (Hannah Cheesman), the robot crewman on the Bridge, with some sort of computer virus, so she’ll presumably be acting as the entity’s eyes and ears on the USS Discovery from next week… or else be compelled to do something for its benefit.

While certainly not the best episode of the season, or anywhere close, “Light and Shadows” did what it needed to as a transitionary hour pushing us into the latter half of episodes. I just wish the time distortions had become a more important and entertaining part of its narrative, to alleviate the dialogue-heavy side of things with Michael and her family on Vulcan.