I’m sure a lot of people were overjoyed with this episode, which epitomised classic Star Trek in many ways. It’s only right that Star Trek: Discovery do new things and take creative risks, to bring the series into the modern age and be more accessible to newcomers, but “Magic to Make the Sanest Man Go Mad” was comforting in its conformity to “the old ways”. While we’ve seen variations of a time-loop story before, ironically many times, in some ways it’s a rite of passage for every new Trek series to mess around with the clock…

This episode was written by Aron Eli Coleite and Jesse Alexander, best known for their work on Heroes, and they used the simple idea of a thirty-minute time-loop to have fun with these characters. And fun is something there hasn’t been much time for on Discovery thus far, what with the background of war and Michael Burnham’s (Sonequa Martin-Green) alienation from the crew. It’s been a tough show, flexing muscles, but in “Magic to Make…” the writers struck a good balance between the verisimilitude and edginess Discovery has brought to the franchise, and some of the sci-fi larks we’re more familiar with. 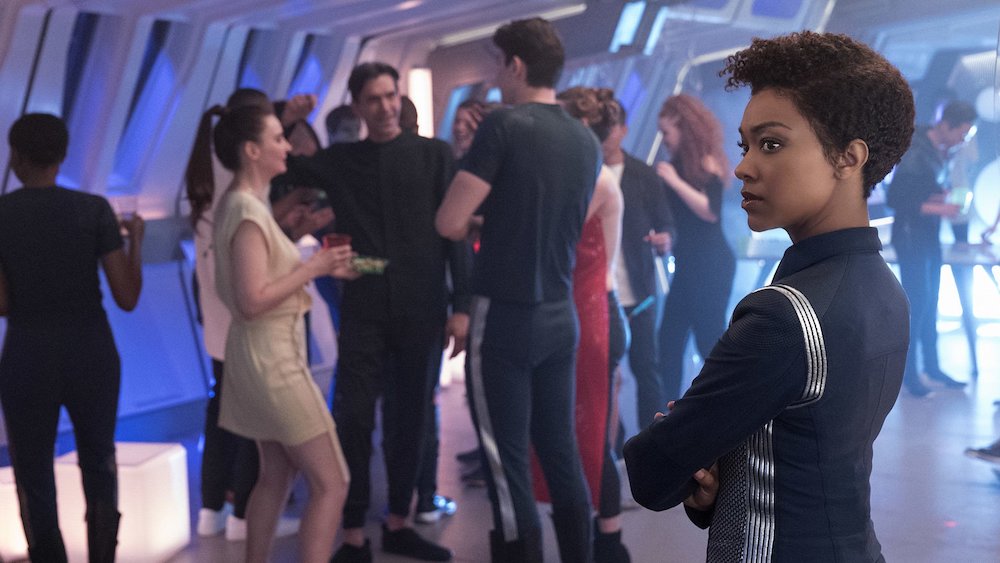 Essentially, Harry Mudd (Rainn Wilson) returned sooner than expected, determined to make Captain Lorca (Jason Isaacs) pay for leaving him behind to rot in a prison cell. His plan is to steal the USS Discovery and sell it to the Klingons and swing the war in their favour. To achieve this, he smuggled aboard inside an endangered alien species the crew beamed aboard to nurture, then activated a device that allows him to reset the timeline within a half-hour window. Consequently, this gave Mudd dozens of attempts to work out how Discovery’s spore drive works, and take delight in killing Lorca over and over again. And with each thwarted attempt, Mudd became more adept and difficult for the crew stop, like an evil version of Bill Murray in Groundhog Day.

This story would have been fine by itself, but it’s territory Star Trek’s mined before, most notably in The Next Generation’s “Cause and Effect”, so what helped this episode was the theme of repetition itself. Quite apart from Mudd sneaking aboard and destroying the ship if he hasn’t achieved his goal after 30-minutes, we also had a good storyline about Burnham trying to break free of her ordered routine. Her life’s very regimented and disciplined, so before the time-loop story began it was still interesting to see her interact with her colleagues at a party. The more free-spirited Tilly (Mary Wiseman) was even trying to play matchmaker with Burnham and Lt. Tyler (Shazad Latif), but it was proving difficult because Burnham’s Vulcan background means she’s a lot stiffer and socially reserved than normal human beings. And, of course, her personality and temperament probably reflects that of many people watching at home. 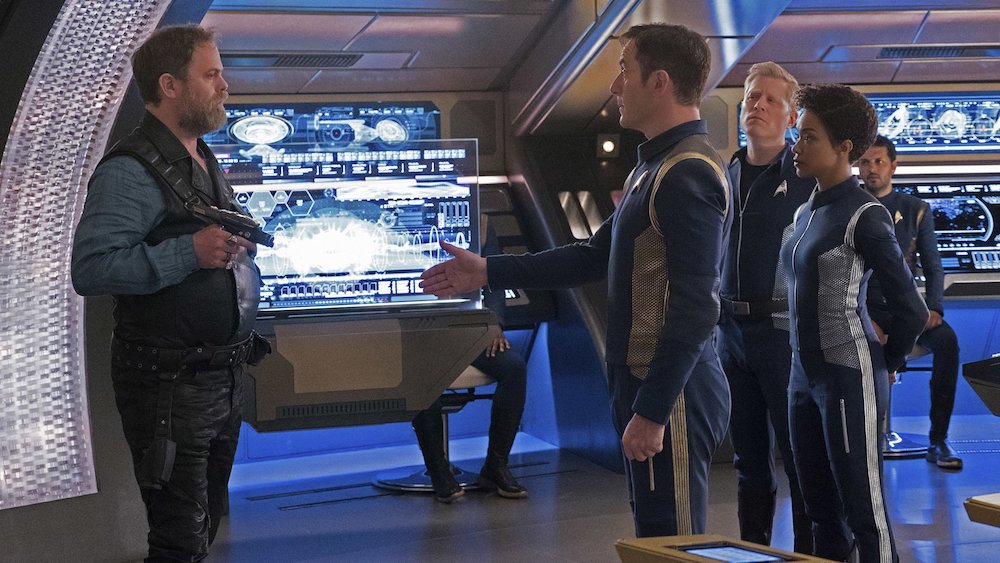 I rather enjoyed all those scenes. The characters are becoming more three-dimensional and there fun dynamics coming to the fore. Stamets (Anthony Rapp) was particularly good this hour, being more relaxed and giving Burnham some good relationship advice, although there’s a suggestion that his demeanour’s changed because of his ongoing interactions with the spore drive as the new “navigator”. So maybe he’ll go back to being an arrogant grouch soon, but I hope not, because he was a lot more entertaining and likeable in this mode. It was also a cool idea to have him aware of the time-loop, due to his aforementioned new role as the “tardigrade”.

Most episodes of Discovery have given us something to makes the show stand apart from previous Trek’s, and “Magic to Make…” probably gave us the first Star Trek social function that… actually looked fun. And I’m not one of those people who bristle whenever a futuristic show has characters listening to contemporary tracks, because folk today still listen to Beethoven and Mozart and we don’t bat an eyelid. It’s also much easier to accept than any attempt to predict what 22nd-century music might sound like, and doing an outright embarrassing job involving weird synth. Either way, here was a party aboard a starship that felt like something I could believe in. I also liked how it bled into the corridors, with a few crewmen stumbling around in the background of other shots. 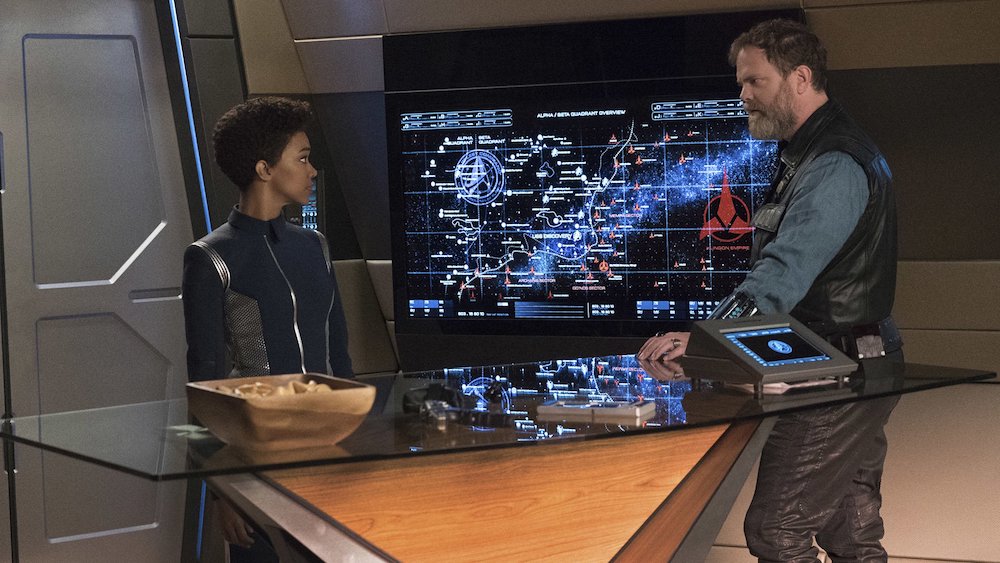 “Magic to Make the Sanest Man Go Mad” wasn’t a remarkable episode because it wasn’t offering anything fresh and new, but it proves that Star Trek: Discovery can do lighter stories with a few twists. I also appreciated the darker edge, like when Mudd painfully disintegrated Tyler during one loop (partly because Sonequa Martin-Green’s misty-eyed reaction was spot-on), or when he callously beamed Lorca into space and we saw his body writhe and die through the Bridge’s viewscreen. Indeed, Mudd himself came across as a genuine threat and someone to be taken seriously, and not a garrulous oaf blundering around with a gizmo that means his many mistakes can be corrected.

There are a few nitpicks and annoyances, like the resolution of the story being to essentially slap Mudd’s wrists and send him back to live with his gorgeous wife, but this was otherwise an entertaining instalment of a show starting to feel more Trek-y. There’s still a lot of work to be done, as there’s far too much focus on Burnham at the expense of other characters and different relationships, but hopefully this will come in time. They clear created the show with the intention of following Burnham’s arc, so Discovery has less of an ensemble feel than we’re used to. But I can feel the experimentation subsiding slightly, as the writers realise the strengths of Star Trek aren’t worth abandoning just to differentiate your show.