This is the second of two consecutive early noirs from director Joseph H. Lewis. Whereas My Name is Julia Ross (1945)—beautifully restored and also released through Arrow Academy—still bears up as a small but perfectly formed psychological thriller, So Dark the Night really doesn’t. Nearly everything that made Julia Ross an enduring minor classic is lacking this time around except for some nice—albeit inconsistent—cinematography from Burnett Guffey, one of the great visual stylists.

So Dark the Night sucks-in the viewer as a whodunit about Henri Cassin (Steven Geray), a great Parisian detective taking a much-needed vacation after an unbroken 11 years cracking cases in the French capital. He’s given a celebrity’s welcome in the small rural town and immediately attracts the attention of Nanette (Micheline Cheirel), daughter of the inn-keepers he’s staying with. It’s really his flash car and stylish suits that catch her eye and she sees him as a potential escape from her destiny as the betrothed of Leon (Paul Marion), a young local farmer. She’d rather be a fine Paris lady who shops and lunches, than a hard-working farm girl. 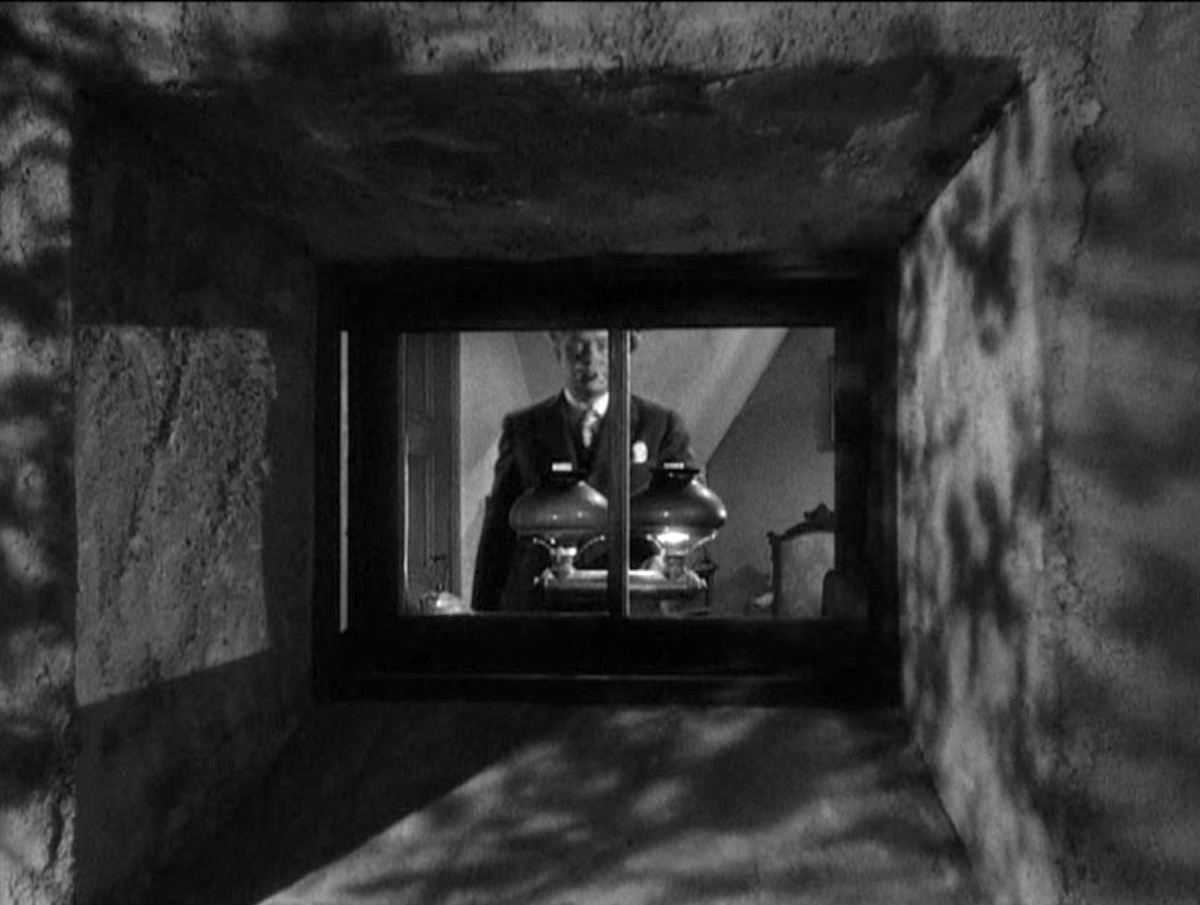 Cassin is vulnerable to the charms of this younger woman and a romance quickly develops, much to the chagrin of Nanette’s fiancé, Leon, who, with a stereotypical French passion, says he’d kill her rather see her with another man. Her father also disapproves because the local tradition seems to be that marriages are agreed between families, years in advance. On the other hand, her mother (Ann Codee) encourages her to pursue the older, and wealthier detective as a way out of domestic drudgery.

My favourite scene in the movie is the conversation between Cassin and the local doctor (Egon Brecher), in which he discusses the pros and cons of an older man marrying a younger woman. Unlike the rest of the film, the dialogue there is nicely scripted, subtle, and naturalistic, as they stand on a rustic bridge with a baroque backdrop of dramatic clouds edged in the moonlight. Both of these older character actors really hit their stride and, for me, it was the only time anyone seems believable. It’s also a great example of Joseph H. Lewis doing what he does best—using visual symbolism to add to the narrative rather than simply remaining a stylistic element. It doesn’t take a genius to read the bridge as a metaphor of transition, a visualisation of a dilemma. The camera angle is often from below, where the river would be, its implied waters representing the flow of time (literal water under the bridge, or the years of Cassin’s life flowing away), And just as in a Gainsborough painting, the brooding sky hints at the approaching emotional storm, the romantic light of the moon obscured by dark clouds… 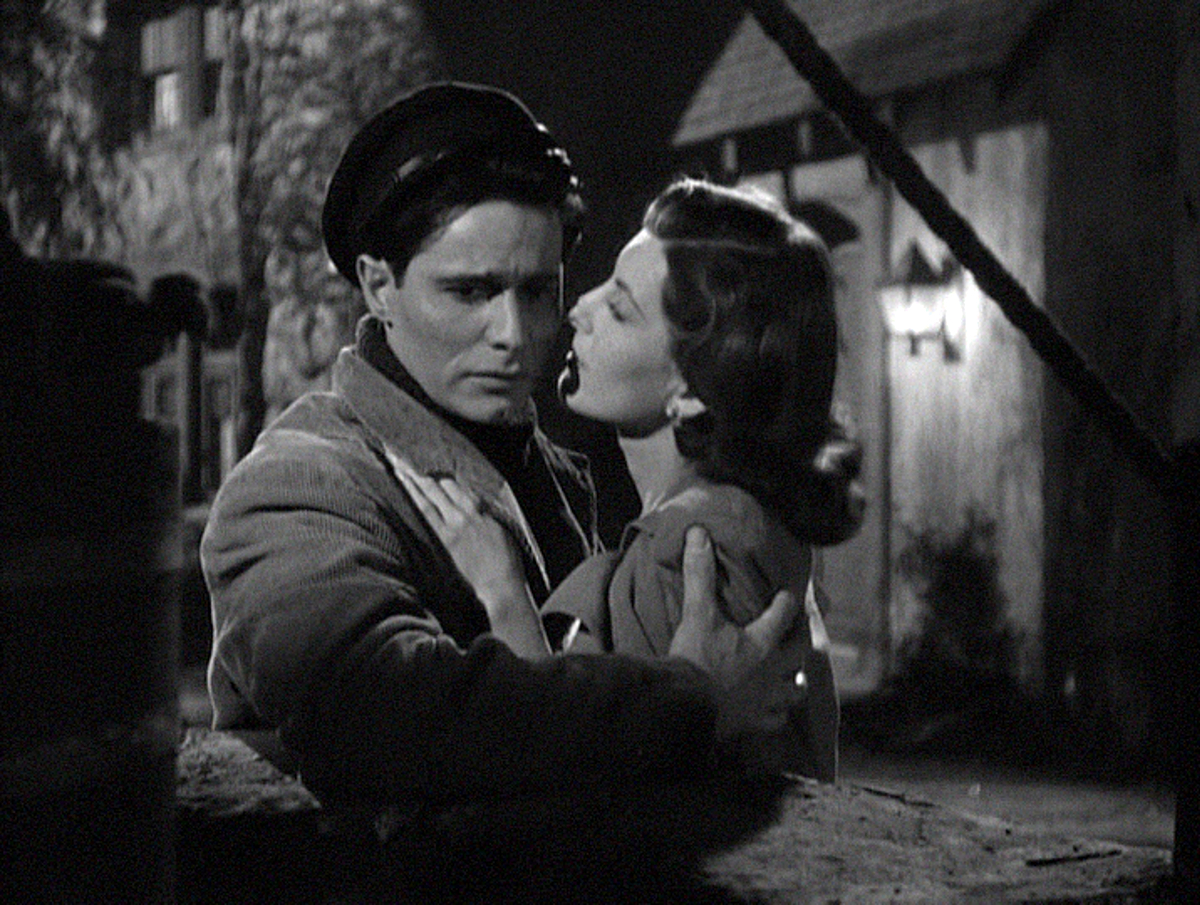 A little like Julia Ross in Lewis’s previous film, Nanette is another young woman being manipulated by a dysfunctional family, though this time she seems to be in cahoots. She’s attracted to Leon’s uncouth passions but is prepared to forego that future in favour of an easy life with Cassin as her suave sugar daddy. In this respect, she fulfils the role of the scheming noir femme fatale, which proves fatal… for her. When Nanette goes missing and then turns up dead, the famous detective is devastated and struggles to put his emotions aside and approach the case with his usual intellectual detachment.

When the murders start, things briefly hot-up. The middle act is quite engrossing and there are plenty of suspects set up for consideration, who then complicate things by becoming victims themselves! The film relies so heavily on one particular surprise that it’s difficult to discuss without spoiling what little fun there is to be had. Suffice to say, that the denouement is unexpected, but only because it’s rather ridiculous. On second viewing, there’s some foreshadowing and a few tenuous clues that hint at the ‘shocking finale’. But then there’s not much point of a re-watch if you already know the outcome because the narrative offers up so little reward elsewhere… 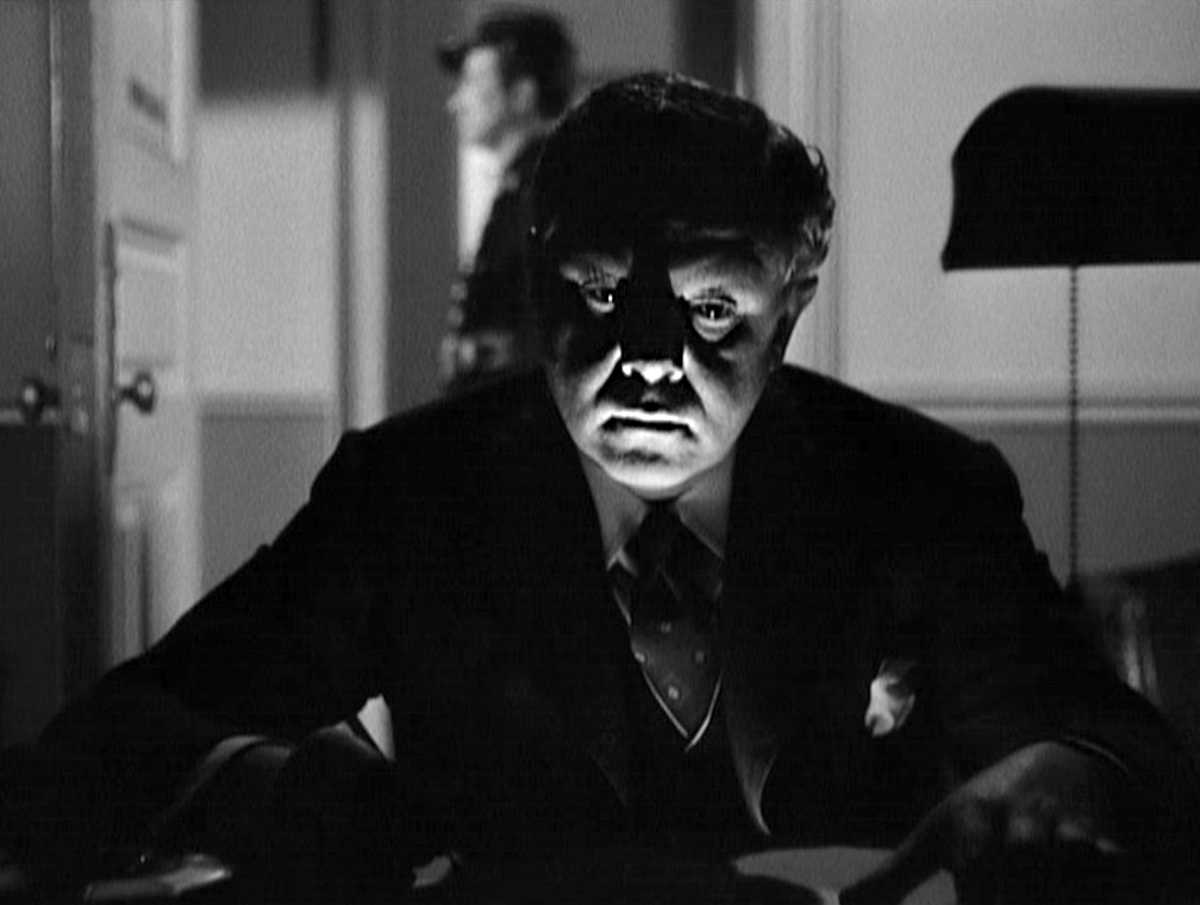 For the most part, the characters are merely cyphers and their motivations aren’t at all clear. When they do become clear, they lose all believability. There are no convincing personalities to latch on to and their responses also seem incongruous and detached. For example, no one seems all that upset at losing family members. Whilst this weirdness certainly stokes the viewer’s suspicions, it’s just lazy writing and clumsy misdirection.

The acting style also grates. The cast is certainly capable, and it’s great to see so many character actors in important roles, but they all seem to have brought their stage training with them and come across as caricatures rather than characters. Steven Geray, however, does do a really good job in the only leading role of some 200 appearances. He has an expressive, kindly face that he uses well to express deep, sometimes conflicted feelings, that belie the cool detachment he finds increasingly difficult to maintain. 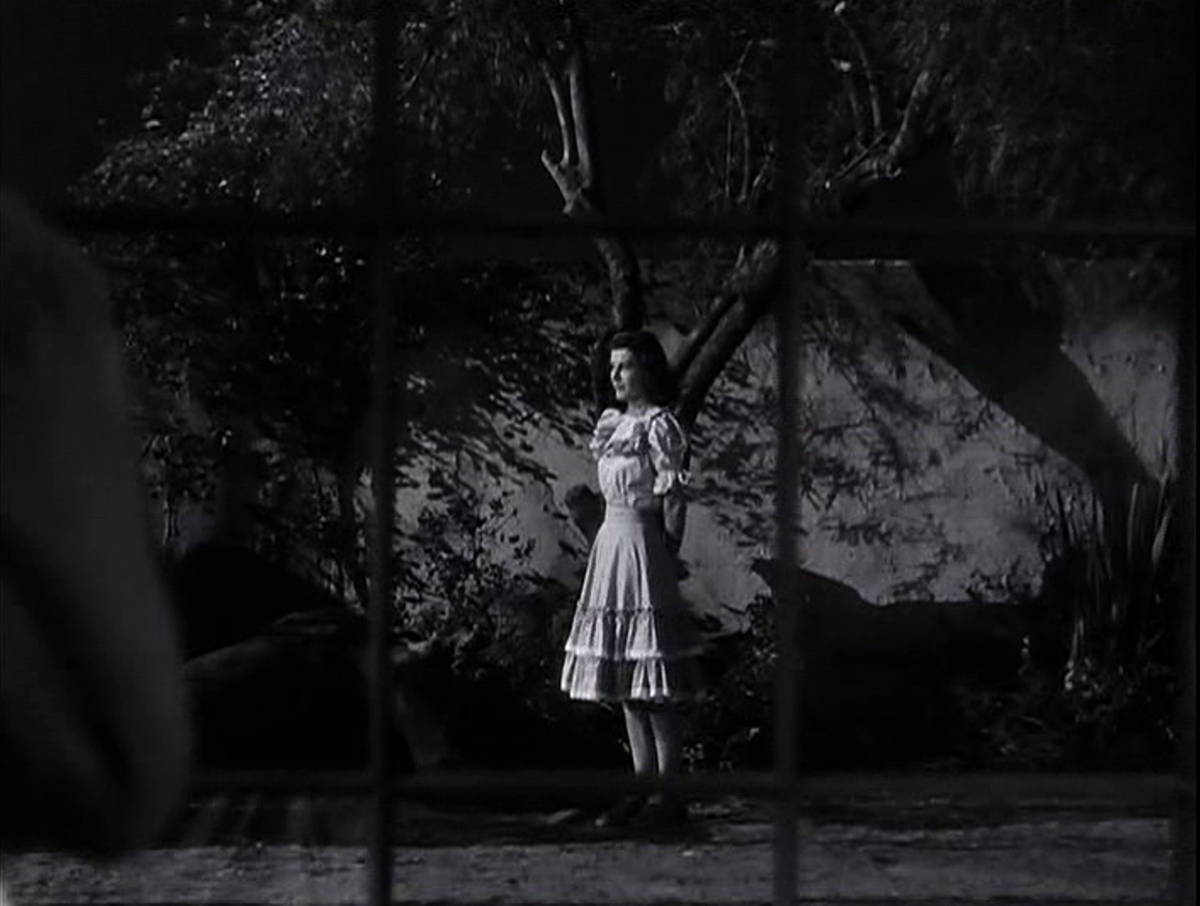 It was probably a brave script for its time. The murders are fairly nasty, though they happen off-camera and are only described. If they’d been shot more explicitly it would be heading toward proto-giallo terrain. As it is, we only get to see the aftermaths implied through reaction shots. We are left to piece together the scenarios, rather matter-of-factly, with the detective. There’s also the kind of outrageous contrivances one might expect from a lesser giallo, but it lacks the clever narrative gameplay needed to redeem such indulgences.

Joseph H. Lewis is a director who’s often been accused of putting style over content and So Dark the Night does nothing to challenge this view. There are inventive camera angles and clever compositions. Lewis was known as ‘Wagon-Wheel-Joe’ from his habit of shooting through objects, particularly wagon wheels in the many B Movie westerns he cut his teeth on. Here he puts the camera high above ceiling fans or low in a fireplace and shoots through the flames. He uses windows to give us frames within frames, the reflections creating a layered montage. But there are also plenty of pedestrian shots and the cinematography is patchy, partly due to the use of stock footage, but also some frankly poor camerawork. 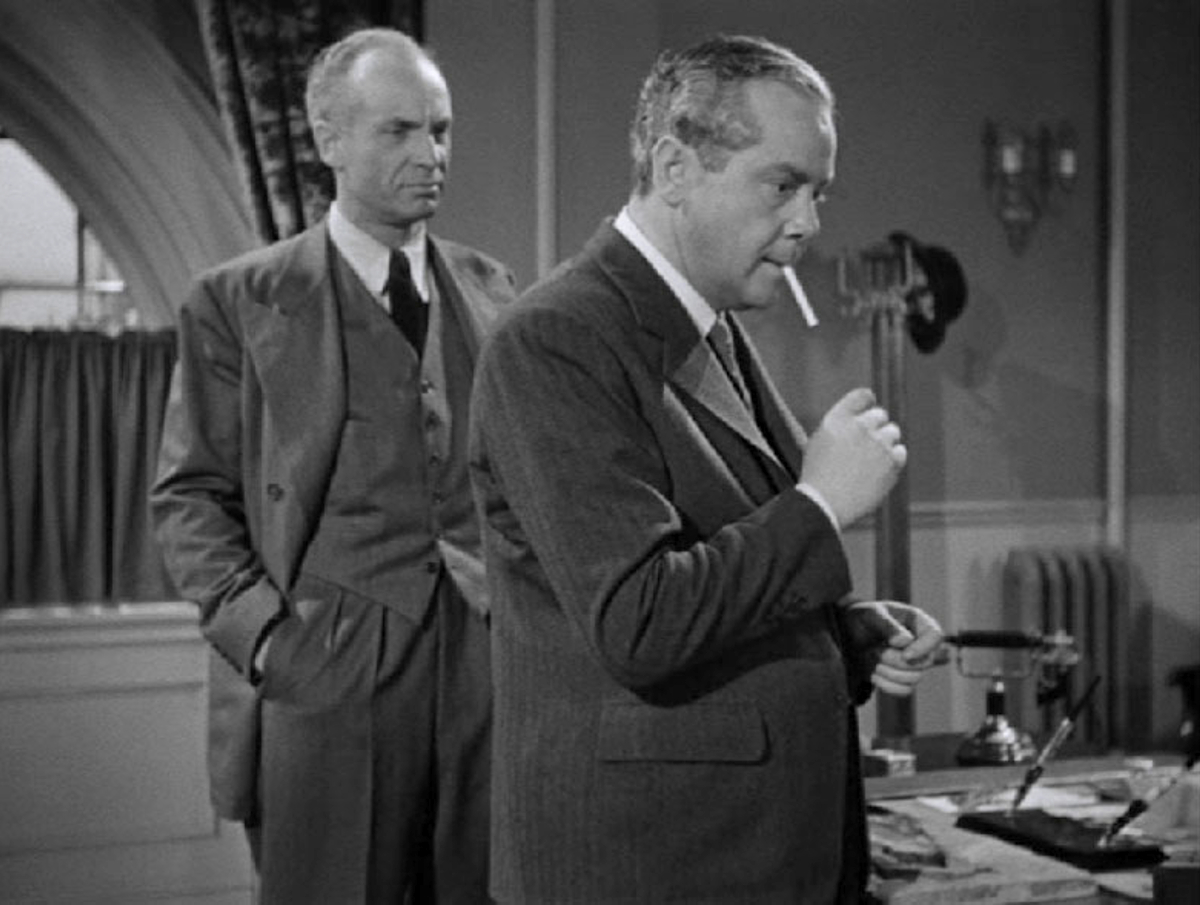 It’s nearly 15 years ahead of Hitchcock’s Psycho (1960) and pulls off a similar schizoid twist, so the dark denouement deserves a little respect, though it hasn’t dated nearly so well. Perhaps that’s because the French setting is unconvincing, to begin with, and so the set dressing already feels a bit wrong and misplaced in time.

It’s very easy indeed to confound audience expectations: simply introduce some new information just before the solution, a revelation that there was no way of predicting beforehand. Here, a somewhat silly twist’s thrown into the mix that there’s very little chance of foreseeing… Now, if this had been a double bluff and there was another twist withheld for the final scene, then we’d be on the way to a classic that could sit comfortably alongside the far superior conclusion of My Name is Julia Ross. Instead, it ends up as a one-trick-pony hinging on the reveal reserved for the last 10 minutes of its, thankfully short, 70-minute runtime.

I thought of two supertwists that could have redeemed the dreadful denouement and made for a more satisfying surprise. Alas, it becomes so desperate to be clever that it lets itself down with a woefully contrived and utterly unconvincing final act. It’s a let-down of such magnitude that negates any suspense built up throughout and ultimately makes the whole thing feel like a waste of time. 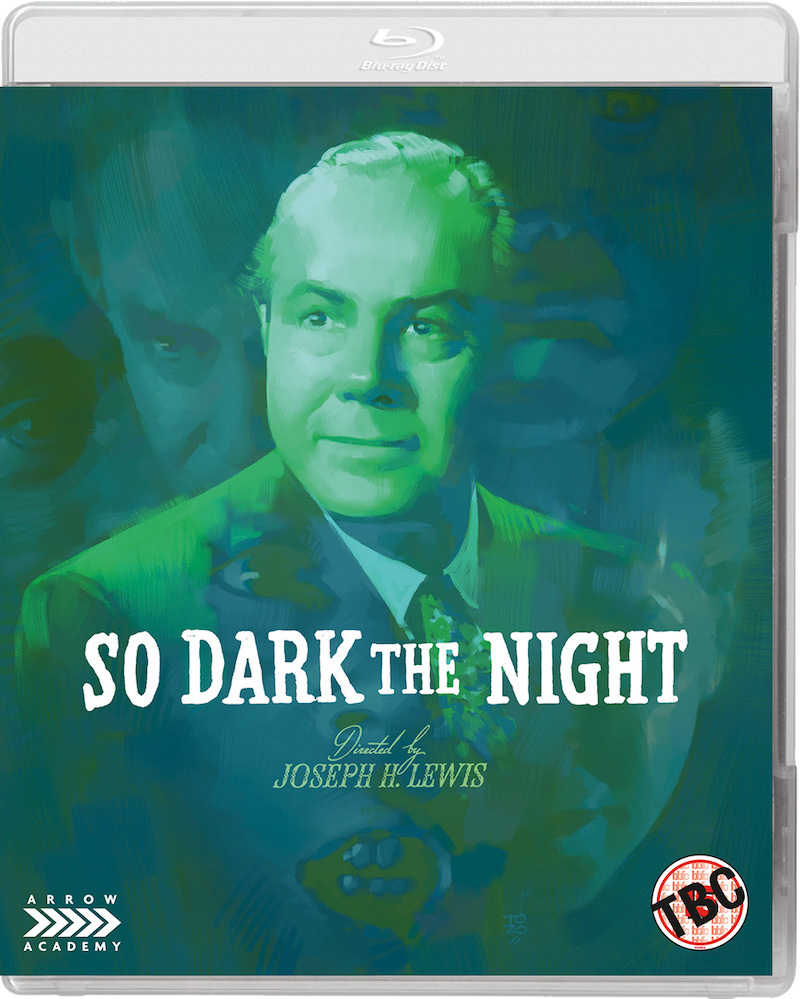