The ongoing issues with the mycelial network have felt like a hangover from last season, and one I’d rather have avoided, but “Saints of Imperfection” appears to provide a satisfying conclusion. Or it at least ties up some questions regarding May (Bahia Watson), the humanoid emissary from the mycelial network that attached itself to Tilly (Mary Wiseman) as a spore, and the uncertainty of Dr Hugh Culber’s (Wilson Cruz) fate after having his neck snapped but then appearing to boyfriend Stamets (Anthony Rapp) during one of the USS Discovery’s ‘spore-jumps’. And it did all that in a way that was genuinely exciting and intriguing, chalking up another hit for this much-improved season.

We still haven’t set eyes on Spock and we’re no closer to understanding what the “seven signals” are about, as attempts to find out keep getting interrupted by other matters. This week, while trying to prevent fugitive Spock’s shuttle from entering a nebula, Captain Pike (Anson Mount) and Michael (Sonequa Martin-Green) are surprised to find the occupant is actually Philippa Georgiou (Michelle Yeoh). Interestingly, Pike doesn’t know she’s not our Georgiou, but rather a doppelganger from the Mirror Universe, with Michael having to keep the secret and pretend “the war” has changed her since they last met. However, Georgiou is allowed to reveal she’s working for Section 31, under the command of Leland (Alan Van Sprang), whom Pike has a tenuous friendship with because their moral compasses are different. And it doesn’t help that a straight-arrow like Pike isn’t keen on Section 31 generally, because he doesn’t like their lack of accountability given their covert work. 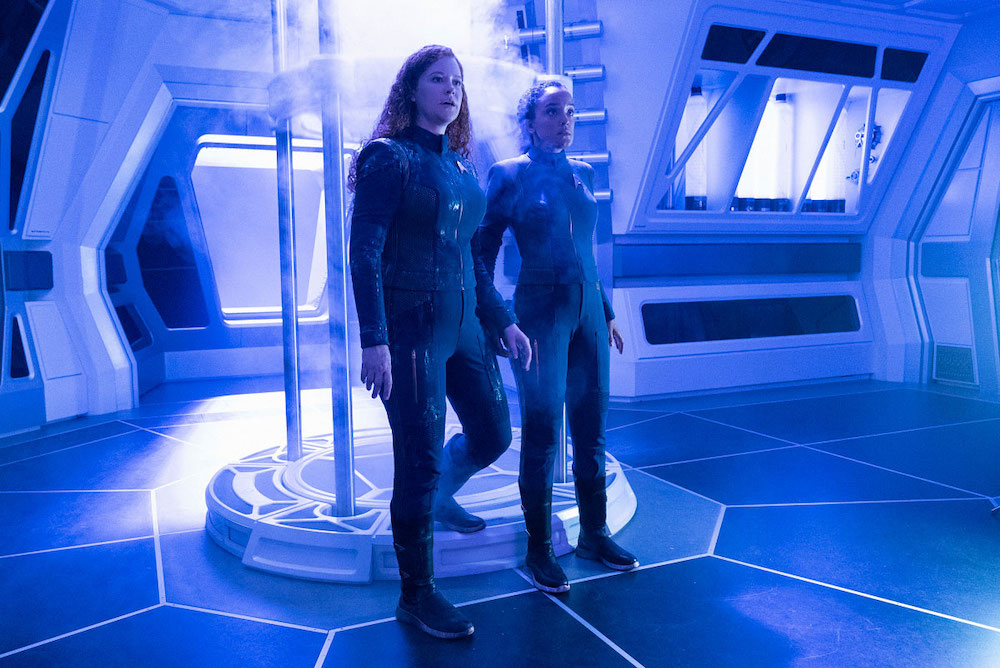 In many ways, “Saints of Imperfection” was built around various characters encountering forces in their lives that either compliment or contrast with them. Michael is back in the orbit of Georgiou, the ‘evil twin’ of her former captain and friend, who had such a positive influence on her life, who is now allowed to pretend she’s one and the same out in public. She’s also reacquainted with Ash Tyler (Shazad Latif), another person she loved with an unconventional identity – being a genetic chimaera of a Starfleet officer and an albino Klingon.

Pike also had difficulty adjusting to the presence of Leland and the controversial Section 31’s operations. And then we had Tilly brought into the mycelial network against her will by May (another ‘twin’ of an old friend), who used the mycelial cocoon in Engineering as an “organic transporter” to rebuild her body in mycelial-land (an impressive CGI vista of bioluminescent grassland). Once there, it became clear the environment is under attack from “a monster” Tilly can perhaps help them slay, which was later revealed to be none other than Dr Culber—who was duplicated into the mycelial network at the moment of his death and has been driven mad because he’s been treated like a cancerous cell by the organisms around him and attacked as a foreign intruder. He’s only survived this long by defending himself with poisonous tree bark. It was a genuine shock to see Culber looking so dishevelled and unhinged, too, given how sharp and well-adjusted his character was last season. 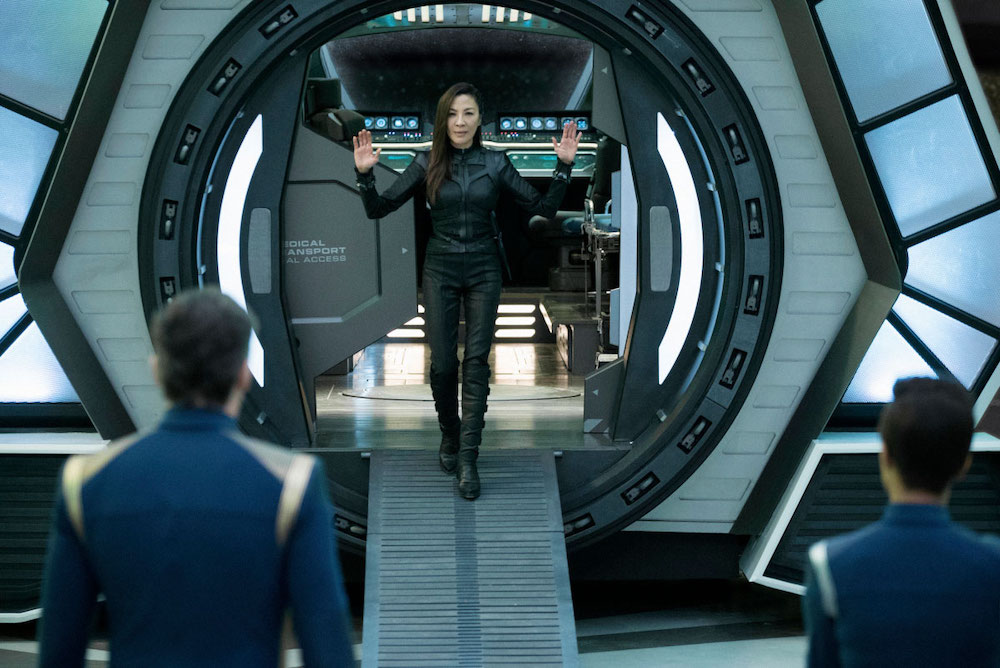 It’s always difficult to think up fresh types of Star Trek stories, but I appreciated how “Saints of Imperfection” became a sort of inter-dimensional disaster story, with the USS Discovery having to rescue Tilly by ‘half-jumping’ into the mycelial network. That resulted in a memorable image of the ship half dunked into mycelial-land, with areas of the ship almost appearing submerged into another realm and requiring tractor beam assistance from Leland’s ship to keep them from vanishing altogether and eaten by the mycelial organisms. It was a great way to do a story that mostly took place in one location, but with such different visual treatments that gave everything a very strong ‘here and there’ contrast. I loved the beautiful VFX of areas of the ship dissolving from the organisms attacking the hull, or how Culber’s body was starting to fall apart and pulse with orange-coloured energy from within. Star Trek: Discovery remains one of the best-looking sci-fi shows around right now. 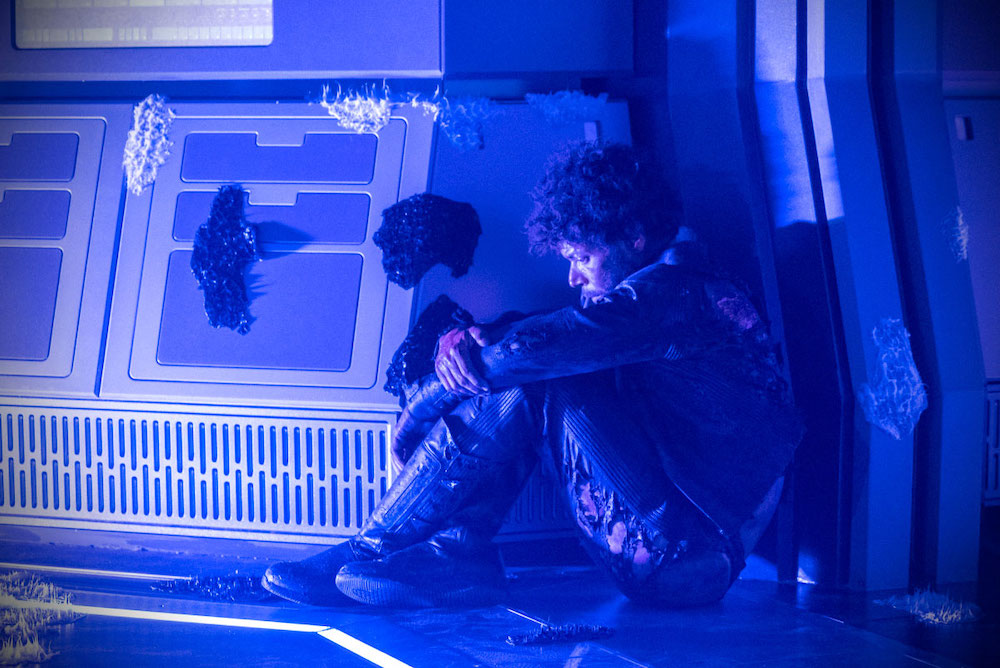 With the exception of the Klingon-heavy “Point of Light”, season 2 of Discovery has more consistently delivered on Star Trek’s classic ideals. “Saints of Imperfection” was another story built around a sense of exploration, optimism, emotional bonding, professional teamwork, and the characters were being challenged and overcoming problems on many levels. The writing from Kirsten Beyer (who wrote many Star Trek: Voyager novels) also kept me guessing about how things would turn out. I thought it was obvious Culber was going to be rescued by the end, but when he couldn’t walk back into his own environment I was surprised the show was going to use this episode to instead end Culber’s time on the show definitively… only to then find I’d been successfully tricked and there was instead a better way to enable his safe return home. It’s always good when an episode can lead you by the nose one way, then another, and it helps that Discovery is a show where almost every character’s safety doesn’t feel guaranteed. That also helped enormously last week, when Saru’s (Doug Jones) death didn’t seem like an impossibility either.

“Saints of Imperfection” felt like a mid-season juncture, as we now have most of the characters back in play and can perhaps focus on finding Spock and uncovering what the seven signals are about. I hope Michael and Ash rekindle their romance, ditto Stamets and Culber (without brushing aside the trauma he’s gone through), and perhaps the Section 31 storyline may even come together now Michael and Pike have a clear investment in some of the people in that subplot. Incidentally, I enjoyed the moment Ash used his comm badge, rather than pick up a hand-held communicator, to Pike’s astonishment, because that technology’s only widely used in The Next Generation era.