Exploitation movies have a none too proud tradition of portraying women as either victims or sex objects, yet some moviegoers are still enticed by the rape-revenge sub-genre. Traditionally associated with gory extravaganzas and grindhouse misogyny, these video nasties revolved around sexual violence. But occasionally, with films such as Faster, Pussycat! Kill! Kill! (1965) and Death Proof (2007), they rise above their sleaziness and offer a kick to the groin.

Deconstructing this controversial sub-genre, movies such as I Spit On Your Grave (1978) and Ms. 45 (1981) make it less about the exploitation of women and more about the victim’s growing empowerment. They depict men as predators and sexualise the scantily clad heroine, but eventually make you root for her to dish out as much bloody vengeance as possible. Corealie Fargeat’s Revenge is a new chapter in the history of the rape-revenge movie and this story proves that women are a force to be reckoned with. 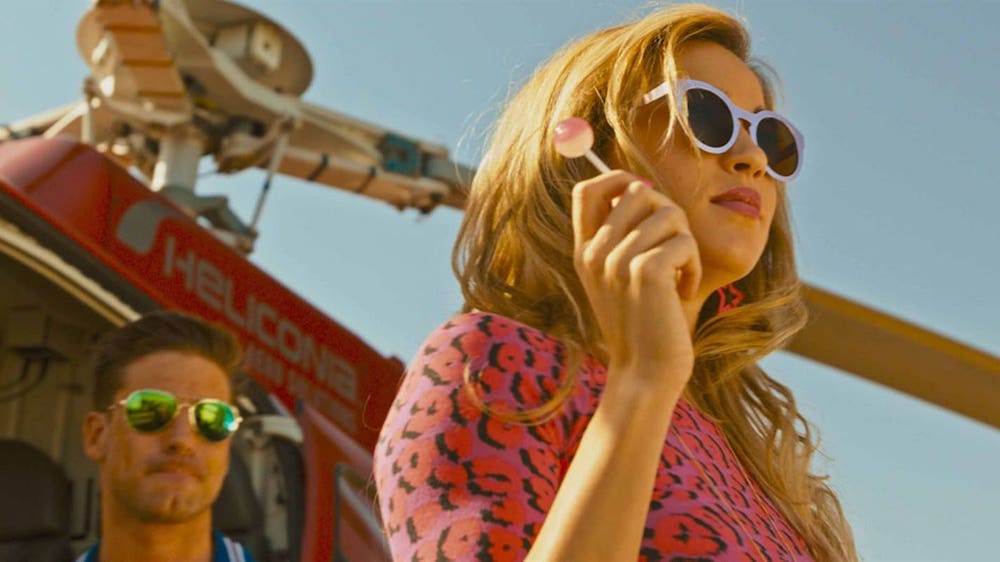 Jen (Matilda Lutz) is spending a couple of days with her wealthy married boyfriend Richard (Kevin Janssens) in his luxurious remote cabin in the desert. Besides this adultery, all is fine until they’re interrupted by Richard’s hunting buddies, Stan (Vincent Colombe) and Dimitri (Guillaume Bouchede), arriving unannounced. Unfazed, the four settle around a blazing fire pit as drinks are consumed and suggestive dances misinterpreted.

The next day, Stan thinks Jen is a mistress for them all, and although Jen makes it clear she isn’t interested in him, he barbarically rapes her with Dimitri turning a blind eye to his friend’s crime. Richard attempts to send Jen away, but she has no desire to become his dirty secret and threatens to tell his wife of their affair. To avoid that, he pushes her off a cliff and leaves her for dead impaled on a tree. Miraculously surviving and using what little resources she has, together with the sheer will to live, Jen hunts the men down one by one… ultimately getting her titular revenge.

Lutz’s performance is powerful, and she keeps her multilayered character consistently interesting by presenting so many different layers. Initially portrayed as a party girl attracted to the lifestyle a rich man can afford, wearing short skirts, Daisy Duke shorts, and huge earrings borrowed from Madonna circa 1980, Jen provocatively sucks her lollipop. She’s a millennial ‘Lolita’ for director Fargeat; a woman to fetishise. But after the grotesque assault Jen endures, her character quickly evolves… 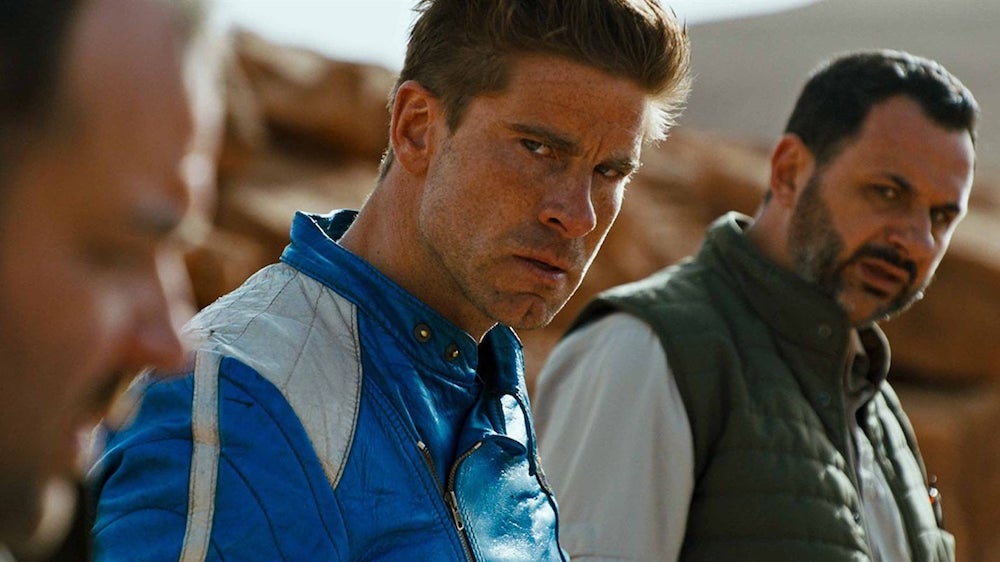 As soon as Jen develops in to a vengeful warrior, the self-realisation about her self-worth permeates her warrior’s instinct. Fergeat creates a setting where Jen must kill the men in order to survive and escape. However, despite her bravery, deep down Jen is still terrified and just as fragile as she falls to the ground from the recoil of firing a rifle. But her courage surges forth.

The intense journey both Fergeat and Lutz portray is that the instinct for survival outweighs the pain she suffered, creating Jen’s empowerment. The men, her enemies, are each the embodiments of toxic masculinity. Richard flashes his wealth, and his hunting chums are both ‘goonish’ before eventually showing their true misogynistic colours. Since they’re destined to meet their ultimate demise, Fargeat wastes no time in developing their characters beyond the caricatures that they portray.

Revenge is a homage to French Extreme Wave movies like Martyrs (2008) and High Tension (2003), and treats the mutilation of the human body with utter conviction. Forgeat handles Jens sexual assault graciously, and she doesn’t need to linger on the assault to make audiences squirm… she does this with the sheer amount of gore. 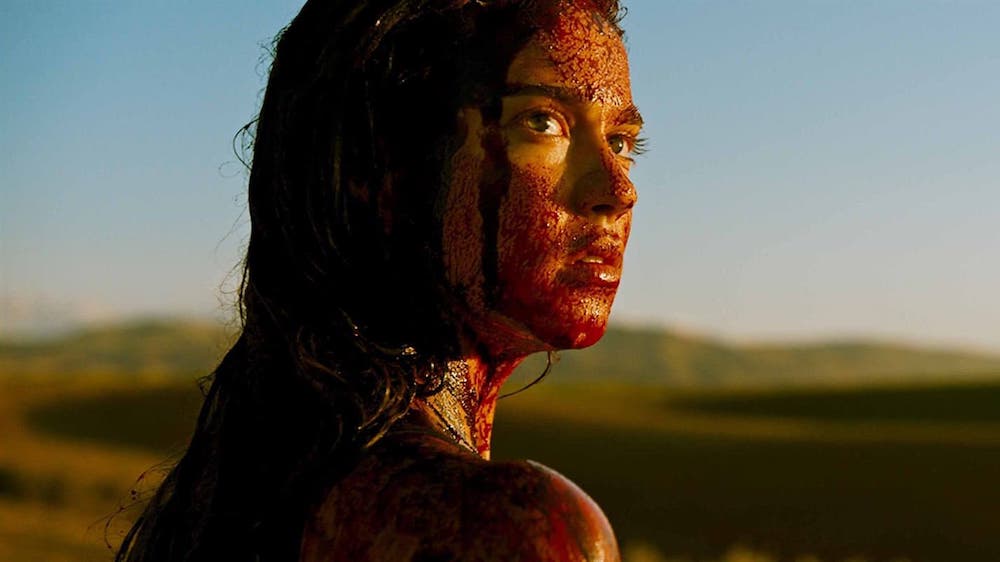 With an abundance of practical effects the human body is used as a creative playground, each gory scene could easily be taken from Re-Animator (1985) or Bad Taste (1987). It isn’t exactly realistic. Heads explode and copious amounts of blood are spilt, but it’s symbolic as you see a masculine character reduced to the point of suffering that Jen endured during her assault. They’re mutilated in to the monsters they already are on the inside.

On the surface, Revenge has jaw-dropping production that thrives on its gorgeous aesthetic and by creating such a shock factor, but it also lifts its bare bones plot from familiar rape-revenge tales and is thus rather predictable. However, it’s rare for this type of narrative to be told through the eyes of a woman, and it really does make a difference. Fargeat recycles the format established from male directors and brings a feminine touch to the premise—shifting the focus and journey of the film onto the empowerment of the female.

Whereas movies of this genre directed by a man would likely keep portraying Jen as an object of the male gaze, Fargeat ensures Jen wears each cut and bruise as symbol of triumph and asks the audience to look at her ordeal from a female’s perspective. 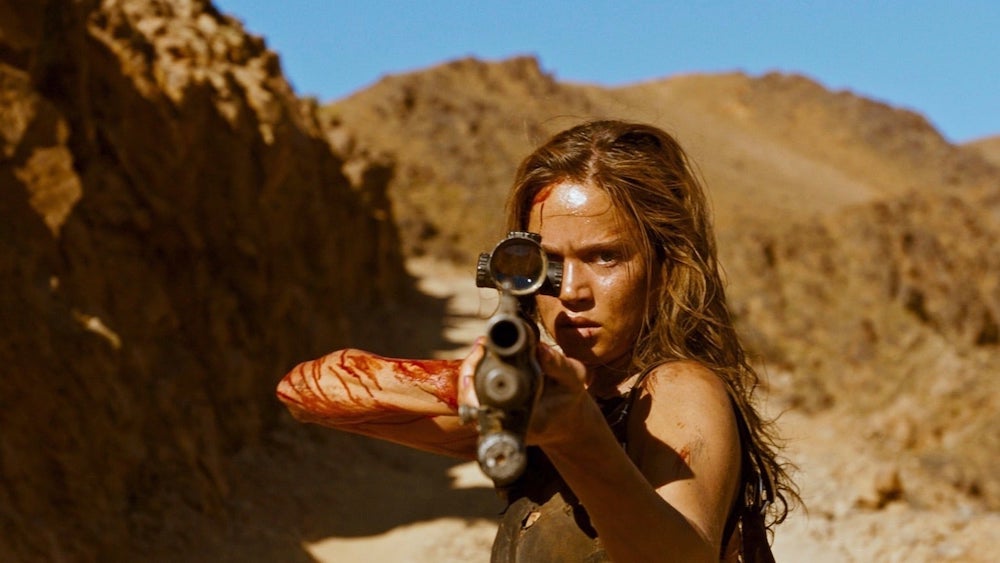 Fargeat’s keen eye and cinematography by Robrecht Heyvaert creates a film as beautiful as an Instagram filter. The vibrant blue sky and blood reds glow throughout, create a vibrant look evocative of Dario Argento. Along with the terrain of the dangerous dessert in the backdrop, Revenge would fit perfectly in the world of Mad Max: Fury Road (2015). To this is added terrific sound design to accompany the ultra-violent images. Whether it’s a knife in the eye or glass being removed from a foot, the amplified sound of icky gore will have viewers squirming. Even a drop of blood resonates with such force that each time they hit the desert floor it sounds like gunfire. Without losing it’s modern edge, Robin Coudert’s score is a homage to 1980’s John Carpenter synth. It successfully adds to the tension along with keeping up with the pace of the narrative. It adds an extra layer to the cinematography creating goosebumps.

In the midst of the #MeToo movement, Revenge is the kind of cult movie we need right now. French writer-director Fargeat cinematically explores the emotionally complex territory with a masterful tone and stylish visual flair. The empowering Jen could easily be compared to The Terminator’s (1984) Sarah Connor or Tomb Raider’s (2018) Lara Croft.

Despite a predictable narrative and some revisiting of genre tropes, the violence and gore is cranked up to 11 and Revenge hits the ground running. Although lacking in tension it’ll certainly make you squirm to the edge of your seat.