The penultimate hour of Preacher took a significant step forward, in terms of finally bringing ‘The Cowboy’ (Graham McTavish) into the main story, and there were several moments I very much enjoyed, but also more of the odd decision-making that has characterised this first season. It’s frustrating because I’ve started to make my peace with why the writers have designed the show this way, but there’s really no excuse for the inelegant handling of certain things.

Under arrest for the suspected murder of ‘Arseface’ Eugene, whom Jesse (Dominic Cooper) confesses he ‘sent to Hell’ to the boy’s father, Sheriff Root (W. Earl Brown), but not in the murderous way it sounds, it wasn’t long before Jesse had picked his handcuffs and bailed out of the Sheriff’s car to organise his final Sunday service. 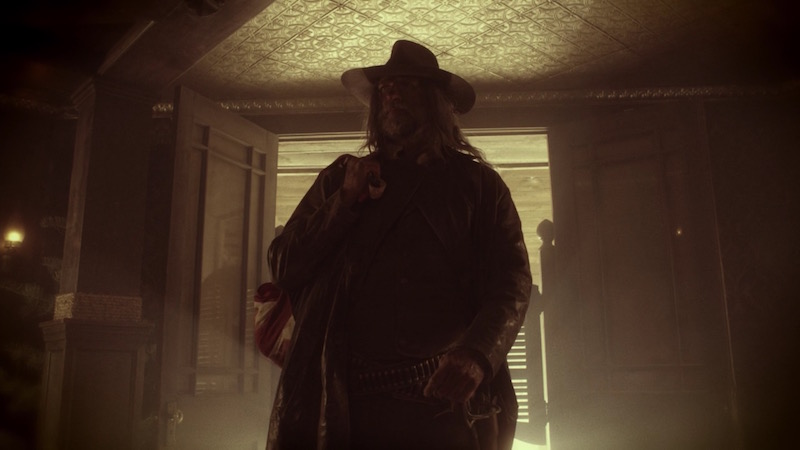 A service where he intends to literally command God down to Earth to appear before his congregation and make believers of them all. In the meantime, our preacher had to make amended with Cassidy (Joe Gilgun), who’s slowly healing in a back room after being burnt to a crisp in sunlight, being fed animals that Tulip (Ruth Negga) has bought from local pet shops.

One aspect of this episode I didn’t understand was the behaviour of Emily (Lucy Griffiths), who was called over by Tulip to keep feeding Cassidy while she left town. Emily hasn’t been written as a woman with a dark side—unless you count having casual sex with the smitten mayor—and she hasn’t been involved in any of the show’s dalliances with the otherworldly… and yet, she was very nonchalant about Tulip revealing Cassidy’s a vampire. Not only that but, rather than keep feeding him small animals, it was entirely her idea to trick her mayor “boyfriend” into coming over and locking him in a room with hungry Cassidy. 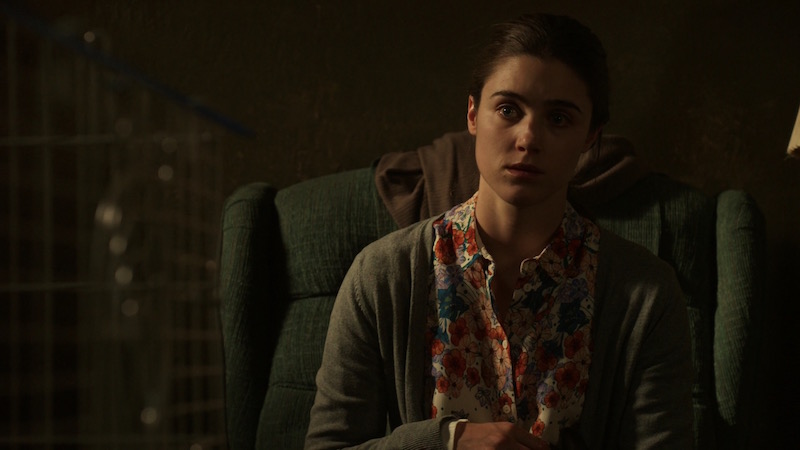 Sorry, but I don’t buy any of it. There just hasn’t been sufficient groundwork to make me believe Emily’s ready to believe in the existence of vampires, let alone facilitate someone’s murder. Have I missed something? It would have been easier to accept if the mayor had been a despicable character from the off, who deserved to die in a gruesome way, but he really isn’t. He was just a love-struck loser. If the idea was to make us realise even sweet, god-fearing people like Emily hide a darker side… that’s fine. But there’s been no signs of this side of her nature, whatsoever, and it instead felt like an easy ‘shock’ the show’s writers didn’t fully earn.

The way in which The Cowboy’s story got brought into the main narrative was more successful, once the show landed a decent twist I didn’t see coming. The scene picking up his story, where he returned to the unpleasant town of Ratwater to massacre the patrons of a tavern—shooting everyone dead with utmost precision, including the preacher that killed his beloved horse—was a very memorable action sequence. I loved the way it focused on the stoic expression of a Chinese bar singer, who provided a creepy soundtrack to the bloodshed before his own head was lopped off by the merciless Cowboy. 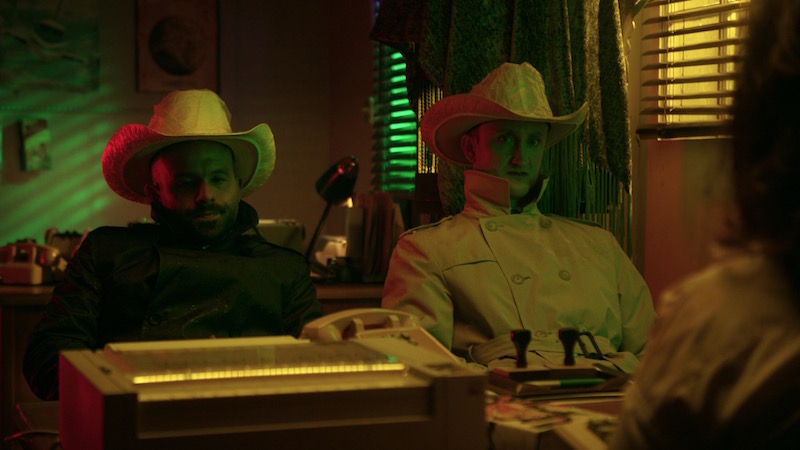 I must confess that when the episode started to replay all the previous scenes that have featured The Cowboy, from weeks ago, in a truncated fashion, I was losing patience. It seemed like a dumb way to bring casual viewers up to speed, or to remind people who haven’t been paying close attention about The Cowboy’s motivations for slaughtering dozens of people. I’d chalked it up as yet another stupid decision from the writers, so I was very relieved when it turned out to be a necessary way to foreshadow a big reveal: we haven’t been watching a flashback of a character who lived over a hundred years ago, or not precisely. These events did happen once, but the repetition was because The Cowboy is now stuck in an infernal loop. Why? Because he’s in Hell. Literally.

Now, Fiore (Tom Brooke) and DeBlanc (Anatol Yusef) were also trying to get to Hell this week. Amusingly, by visiting a travel agent with their very special request to go “south”. I always like it when the ordinary world is revealed to be hiding the extraordinary. And while it seemed likely they were planning to get Eugene back, so Jesse wouldn’t have a reason to keep hold of the ‘Genesis’ entity that’s chosen to inhabit him, the twist was they were actually after The Cowboy to make a deal: a way out of hell, where he relives the worst few days of his life, for all eternity, in exchange for killing Jesse Custer. The stage is set for the ‘Saint of Killers’ to finally make his presence felt in next week’s finale. 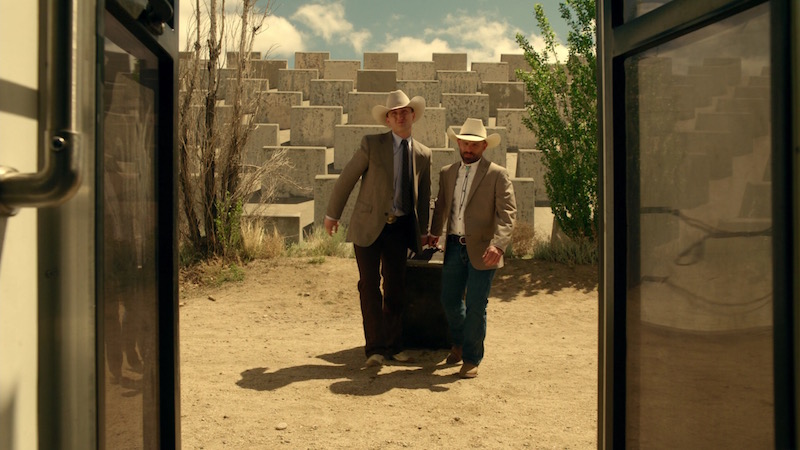 The Cowboy, Fiore, and DeBlanc stuff elevated this episode. (A special mention to the subtle Breaking Bad reference, with the angels waiting for a bus at the exact spot Jesse Pinkman also waited to leave town. Image above.)

It’s not that the rest of “Finish the Song” was a washout, but it was only really setting things up for next week. Jesse apologised to Cassidy and now they’re bonding over burying the dead mayor’s body (amusingly, beneath the very tree all those scalped bodies once hang in The Cowboy’s time); Odin Quincannon (Jackie Earle Haley) fully expects the fugitive Jesse to come back to his church; the deadly Seraphim has been released by Sheriff Root, who found her sitting in the angel’s bathtub, her arms and legs removed, and chose to perform a mercy killing he doesn’t realise has enabled her to ‘resurrect’ in a fresh body; and Tulip’s about to get her sweet revenge on the man she originally came to Texas to kill. 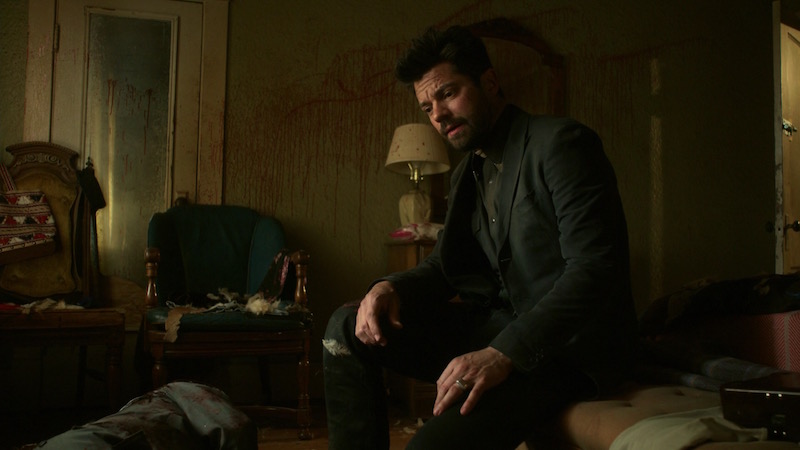 I have issued with the last two developments, though. Sheriff Root hasn’t coalesced into a dimensional character I understand, but I don’t really see him strangling a young paraplegic to death in a motel bathroom. It happened because it had to, not because the character would actually do that. And Tulip’s quest for revenge is fine, but it’s been impossible to get motivated by any of that because the man she wants dead has been faceless until now. Suddenly having him tied to a chair being threatened by Tulip doesn’t really work, because I have zero connection to him as a person, and the show’s flashbacks haven’t convinced me of why he deserves to die.

As usual, “Finish the Song” worked in some ways, but fell apart in others. The show just isn’t put together very well. Some of this is because aspects of the concept and the characters don’t work under the scrutiny of weekly TV, but also the decision to keep everyone anchored in one town. The comic book is being bent to the will of what AMC need for a continuing drama, and there are occasions when you can see the source material isn’t a good fit. But there are certainly moments when it works brilliantly. I just wish there were more of them. At least the finale looks poised to be an insane nexus—a church service where God’s going to be ordered to attend by a preacher hosting an angel-demon crossbreed, helped by a vampire, with an assassin from heaven and a hitman from Hell about to crash the party. Can’t wait.