I have a confession to make. I am absolutely wrestling mad. Truth be told, I can’t remember a time where I wasn’t watching the sport. From going down to Woolworths to buy videos when I was younger, or to the toy shop to buy figures of Hulk Hogan and The Undertaker, wrestling’s always been present in my life. It’s something I’ve never grown out of. Whether it’s WWF and WCW, or ECW and NJPW, there’s always something new on the horizon. One thing I’ve enjoyed the most in recent times is the emergence of women’s wrestling, especially with Impact Wrestling and WWE after many years of not being taken seriously. So when Netflix decided to make a TV series about GLOW (a.k.a ‘Gorgeous Ladies of Wrestling’), a women’s professional wrestling promotion launched in the 1980s, my interest was piqued and I knew it was something I needed to watch.

Admittedly, I knew very little about GLOW going into this show. One of my primary concerns with a TV drama about wrestling is how the “sport” is portrayed. For all its popularity, wrestling is still seen as a joke in many circles, and often not taken seriously due to its scripted nature. The athleticism and effort involved is usually ignored, and on the surface GLOW looks likes a promotion encompassing the camper side of the industry, and not the hard work that can go into making it a huge success. I was pleasantly surprised that Netflix have made a drama that not only captures the true essence of professional wrestling, but also the passion, hard work, and dedication that all the performers put in to entertain audiences. GLOW could’ve easily cranked up the comedy and made a mockery of its subject matter, but the balance between laughs, drama, and emotion makes for a gripping show in a variety of ways. 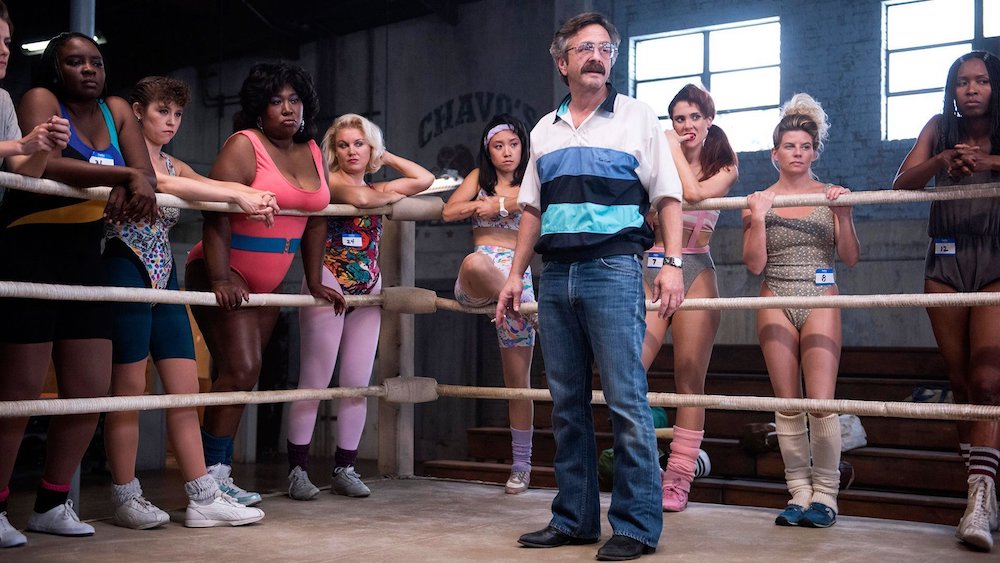 GLOW tells the tale of Ruth Wilder (Community’s Alison Brie), as she struggles with her passion for acting in an industry where women’s roles are very limited. She wants more from her profession and sees male roles as juicier and beyond the stereotypical secretarial roles she finds herself faced with. We see her doing improv, and it’s clear her love for acting goes far beyond just the money. In a strange twist of fate Wilder ends up at the first GLOW audition in front of director Sam Sylvia (Marc Maron), a slimy and uncaring man who has no limits regarding low he’ll go with his female talent. He also has no real enthusiasm for the project and is far happier just hiring the best-looking women and attempting to bed them. As you can imagine this doesn’t gel with Wilder’s exuberance and the two of them clash, at first. Through a cruel twist of fate involving her best friend Debbie (Betty Gilpin) turning up and ratting her out for sleeping with her husband, Ruth finds a real life rivalry that grabs the director’s attention and the rest is history.

Brie is, unsurprisingly, a fantastic lead actress and carries the show on her back with a believability that few others could carry off. Ruth is a tough role, with a whole range of emotions to portray. She’s smart and funny, but equally vulnerable and unsure along the way, and Brie brings her A game. The off-screen tension turns to an on-screen blowout with Debbie, taking on the persona of all American ‘Liberty Belle’, while Ruth steps out of her comfort zone and into the shoes of ‘Zoya the Destroya’ in that ever-popular USA vs foreign country storyline. It’s reminiscent of many true stories over the years from the wrestling industry, where the best rivalries on their shows have come from conflict behind the scenes. It demonstrates how Ruth and Debbie want to put their differences aside, or at least channel them in a different way, in order to both be successful. Ruth isn’t the only one struggling with her career, as Debbie was once in a hugely popular soap opera, but since having a child she’s found herself out of sorts, so GLOW offers them both an opportunity at the best time possible. 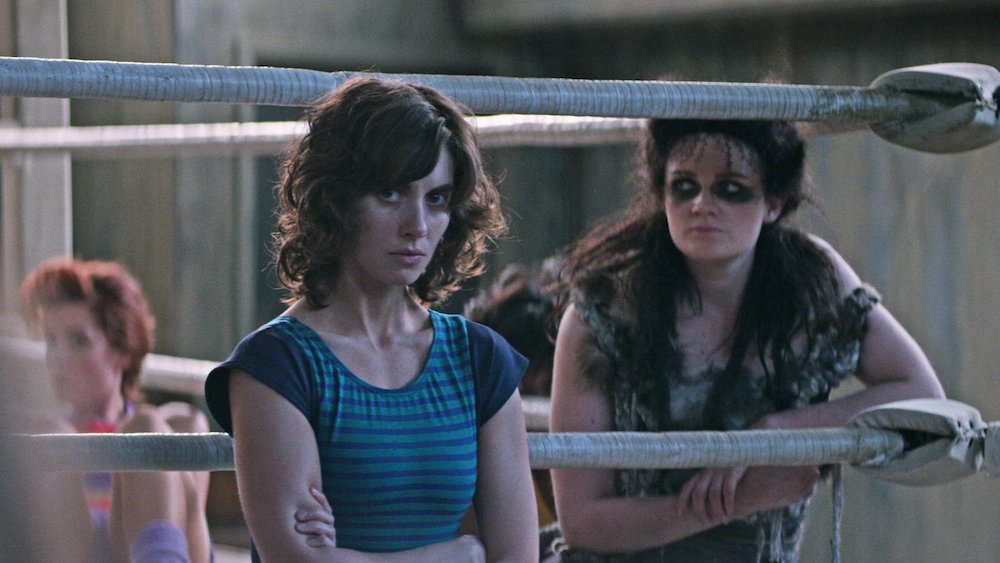 While GLOW’s success is anchored by the main event, the supporting cast also get a decent amount of time to develop their characters and backgrounds. Carmen (Britney Young) is ahead of the game, as she comes from a wrestling family, yet has issues with confidence. Cherry (Sydelle Noel) has a suspicious link to the director ,as well as a man at home to worry about. Rhonda (yes, it’s singer Kate Nash) relies a little too much on her looks but she has a good heart. And, perhaps the most intriguing, is Sheila (Gayle Rankin) as the ‘She Wolf’, who steps off Broadway to portray a challenging character that shows best the depth and emotion that GLOW is capable of. Creators Liz Flahive and Carly Mensch have clearly learnt from their previous work on Nurse Jackie and Orange is the New Black, and therefore know how to create strong and varied female roles that are fully defined and we can truly care about. We want to follow their work and see GLOW succeed, and the audience is fully invested in that journey.

One of the most fun things about GLOW, if you’re a wrestling fan, is spotting familiar faces along the way. John Morrison turns up as a trainer, and Brodus Clay and Carlito play Carmen’s brothers; while we see matches involving modern-day independent talent including Joey Ryan, Alex Riley, Christopher Daniels, and Kazarian. Even one of the most popular women’s wrestlers today, Awesome Kong, takes a role as Tammé ‘The Welfare Queen’ Dawson on the main GLOW show. The attention to detail on the wrestling shows they’re watching on TV, or the posters on the walls, etc, all add to the legitimacy and help   draw you into the ’80s era. These are all little things that help a wrestling fan enjoy the show a touch more, but GLOW isn’t all about the wrestling. It’s as much about the characters behind the characters and the journeys they’re on, so even if you know nothing about wrestling it’s still worth a watch. 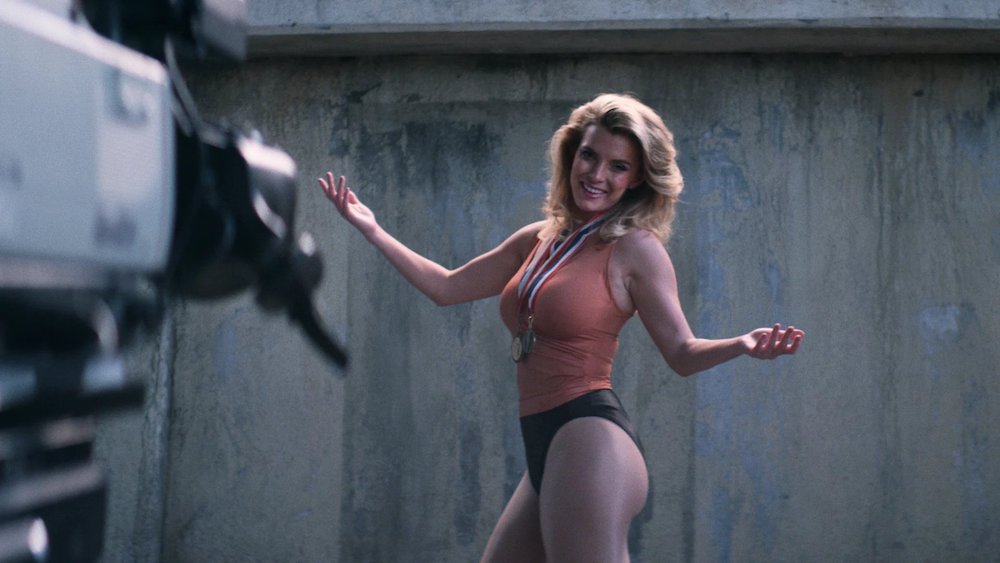 With all episodes available immediately on Netflix, GLOW is certainly one of those addictive shows you can easily breeze through in a weekend. Alison Brie is, as always, a complete pleasure to watch. Her comedic experience from Community is on full display, while her role on Mad Men as a strong woman in the 1960s certainly empowers her performance here, where the same gender inequality is still real a few decades later.

It feels like GLOW manages to deliver something for everyone really, and that’s where its strength lies. There’s a mix of characters and emotions, it has a strong narrative purpose and moral message, and while it may be dramatic in places it never loses the entertainment or humour that many associate wrestling with. What GLOW shows is how hard it is to become a professional wrestler, and in fact how difficult it is to be a woman in general. Whether it’s trying to balance a home life and career, or fighting against being held back because of your gender, such conflict existed in the ’80s and the conversation’s still relevant today. GLOW juggles an entertaining subject with thought-provoking social commentary, meaning Netflix has added yet another strong series to their lineup.