Comedy sequels rarely improve on the original. To be fair, the list of films better than the one that spawned them is always short, but it’s even shorter when it comes to comedies. It’s just unlikely that a script can recapture lightning in a bottle for a second time, let alone a third! While it has the same charming cast as the surprisingly brilliant first film and the slightly less entertaining follow-up, Pitch Perfect 3 is a prime example of sequel fatigue. The endeavour feels lazy, aimless, and lacks the kind of tonal and narrative logic that it needed. It still contained some fun moments, but it’s a big step down from 2012’s surprise hit.

Wrapping up the Pitch Perfect trilogy, this instalment sees the Barden Bellas a cappella group coming down from their high of winning the world championships in the previous movie. The team’s now split apart with each member trying to make new lives for themselves. But they’re desperate for an opportunity to sing together again, so reunite one final time for a European USO tour where they’ll sing for the troops and, unsurprisingly, end up in a competition with the other touring performers. 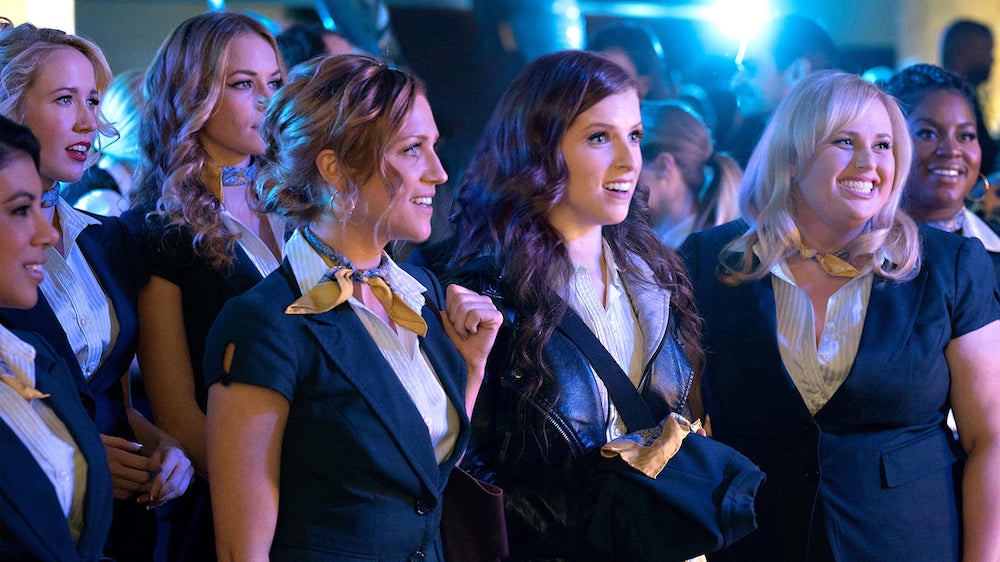 That’s not all, though, as the sequel takes a number of weird and jarring tonal missteps in its subplots. In fact, a secondary storyline is an uncomfortable detour into action movie territory involving con artists, gangsters, and fight scenes. It just doesn’t fit, and the cheesy action-comedy beats don’t blend with the established Pitch Perfect tone. Add to that the painfully awkward insertion of real-life producer DJ Khaled into the mix, and a villain with a terrible Australian accent (played by John Lithgow), and you’ve got a film that’s often a chore to watch.

Kay Cannon (30 Rock, Pitch Perfect, New Girl) is an undoubtedly sharp and witty screenwriter, but it’s evident she’s phoning it in here. Many of the best jokes are lazy callbacks to the previous movies, and numerous gags rely on the excellent cast’s ability to sell them. The performances from Anna Kendrick, Rebel Wilson, Anna Camp, and Brittany Snow are all still terrific, thankfully, and the dynamic between this ensemble is one of the only elements to be can still be strongly recommended. You can also still expect scene-stealing deadpan dialogue from Elizabeth Banks and John Michael Higgins, returning as the ridiculous singing commentators. 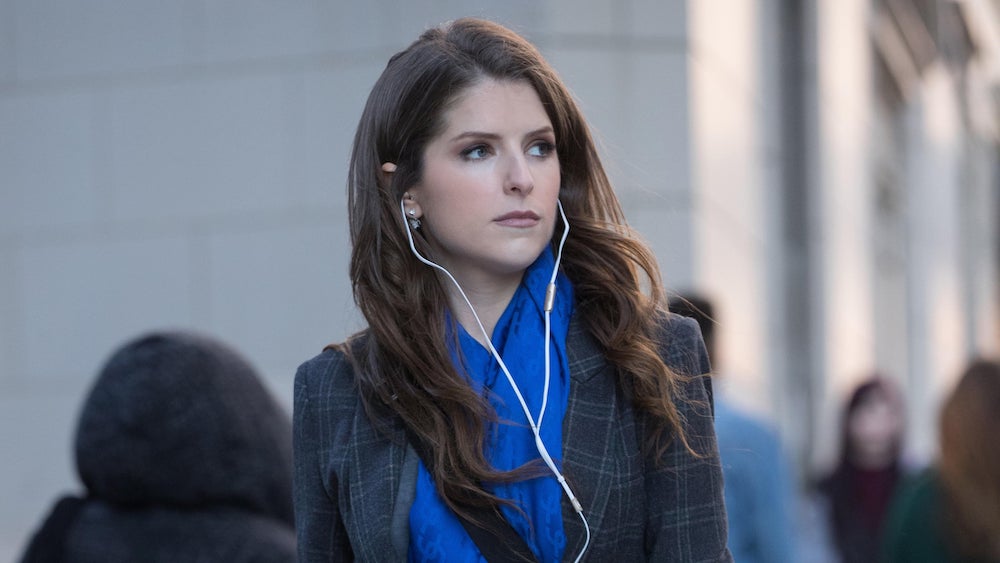 There’s something a little odd about having the entirety of the plot be centred around the USO tour and a “support the troops” narrative, though. It might be a stretch to say this is propaganda for the US military, but there are certainly moments when it feels like exactly that. There’s no doubt it was made in collaboration with the army, given there’s a “special thanks” credit given to the US Department of Defence at the end of the film. Even without exploring the reasons why there’s so much story about the military in the film, it’s just one more way that Pitch Perfect 3 feels strangely unlike the earlier two films. How did a light and frothy comedy about a collegiate singing troupe end up leading to a sequel about the army?

Too often, Pitch Perfect 3 attempts to raise the stakes and increase the scale of its story without doing the necessary groundwork to earn it. Character work feels rushed and unconvincing, and the film even undermines the finale it builds to in order to give us one last scene with the Bellas onstage together. Fans of the first film bought the soundtrack and played it on repeat, but that’s not going to happen here. There’s barely a memorable musical moment in the whole film, and even if the crowds are bigger and the stakes supposedly higher, nothing has the same resonance or feeling of importance. 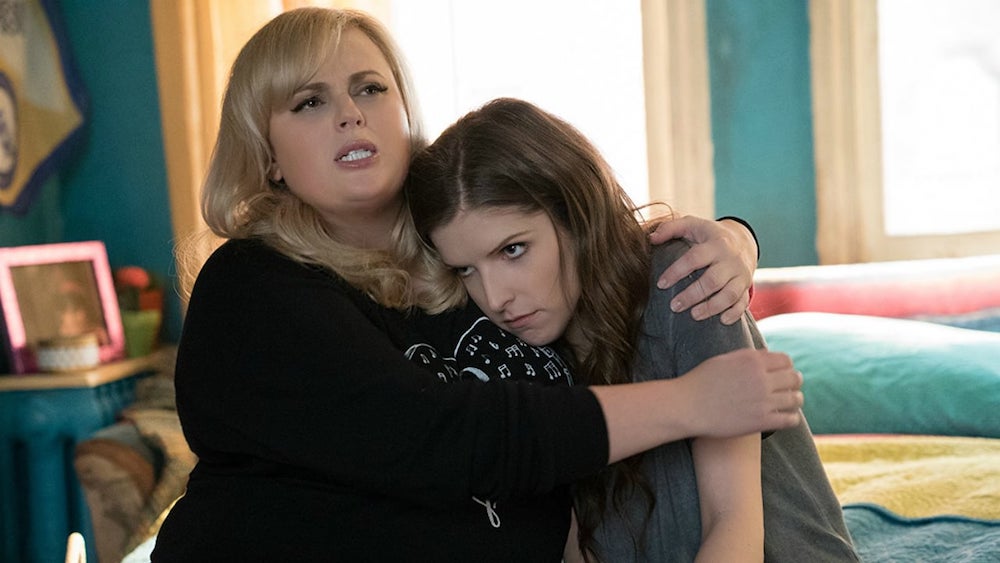 Diehard fans will certainly find ways to ignore the film’s glaring flaws, especially because the cast is still on impressive form. Wilson gets saddled with some of the most ridiculous material, and yet she emerges unscathed and manages to sell every moment. The same can be said of Kendrick and Camp. Much of the enjoyment of these films has been seeing the group interact and grow closer as friends, and that continues to be the best source of humour in part three, even if there are fewer laugh out loud moments.

In the end, one may get to the final notes of the film feeling glad this musical comedy saga has decided to wrap things up before it become unbearable. Pitch Perfect 3 feels tacked onto the series, in order to give the overall story a clunky sense of closure, but it’s disappointing to see that a legitimately terrific comedy led to this shabby and inert swansong. 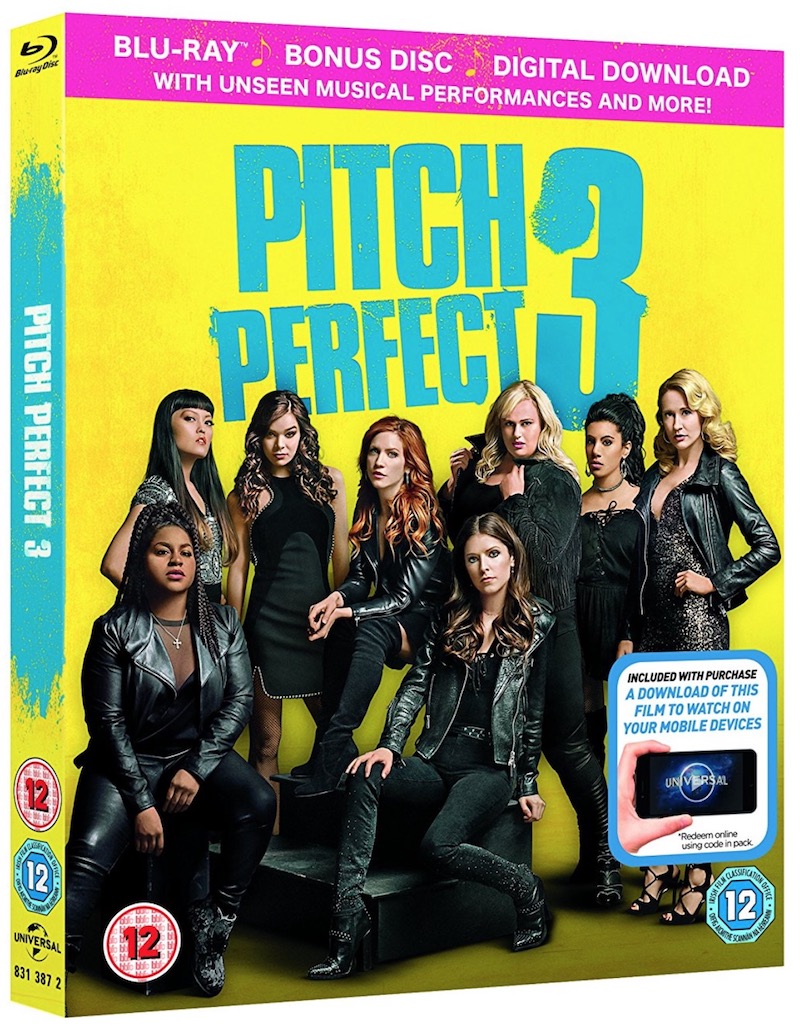 A colourful movie from start to finish, the 1080p transfer also does an excellent job capturing the textures and finer details on people’s faces. Blacks are deep and skin tones natural, although there’s source noice throughout the image. The DTS:X Master Audio is a fantastic experience, with plenty of strength and richness across all channels. Detailed and fluid aural highlights are abundant, which is just what you want from a movie about singing and music, with the highlight being the impressive finale performance from the Bellas. — reviewed by Dan Owen.