A quadriplegic man has a trained monkey help him with his paralysis until the little simian begins to develop feelings, and rage, against its new master.

George A. Romero’s name will always be synonymous with zombies. He essentially created that horror subgenre with Night of the Living Dead (1968), but it’s worth remembering Romero also made other things to terrify audiences. One of those, Monkey Shines: An Experiment in Fear (1988), was his first studio movie, for Orion Pictures, who desperately needed a box office hit to ease their finances difficulties. Working with a $7M budget in his hometown of Pittsburgh, Pennsylvania, Romero’s vision was compromised by the studio’s interference, so the experience guaranteed his return to the indie scene for the rest of his career.

There’s a deliciously bonkers concept to Monkey Shines (adapted from the 1983 novel by Michael Stewart), which Romero films almost like a soap opera slowly going insane. Allan Mann (Jason Beghe), a talented athlete who goes for runs with a rucksack full of bricks, is hit by a truck and paralysed from the neck down. (In one of the most unconvincing traffic accident sequences I’ve seen in cinema—it has to be said, George. RIP.) Oddly, this all happens within minutes of the opening credits, giving us not much time to understand Allan as a character or appreciate what his mobility truly means to him. I think Romero was just itching to get to the crux of the matter… 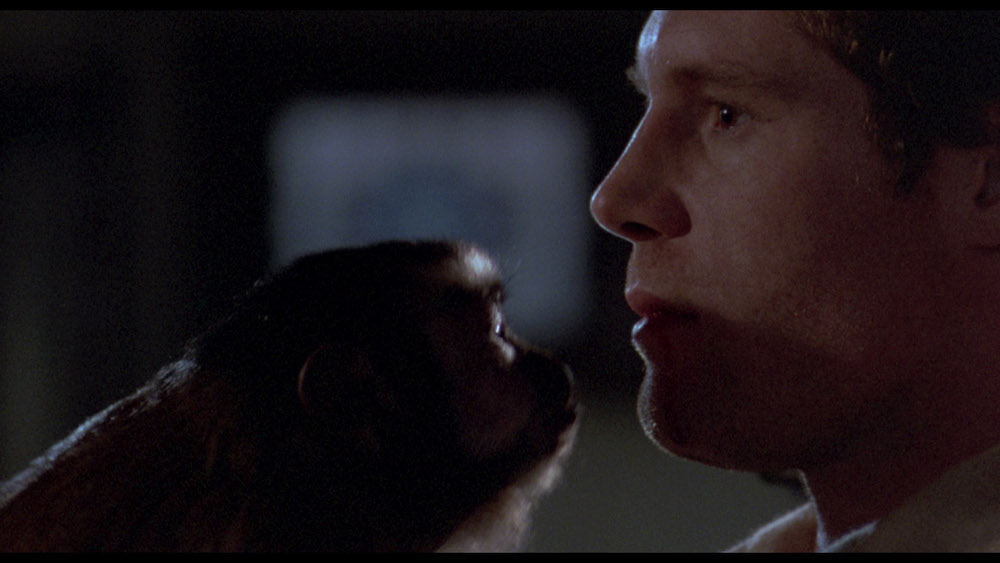 Once Allan returns home months later, confined to a wheelchair he controls using a sip-and-puff wand, he understandably struggles to cope with his new physical limitations. His girlfriend Linda (Janine Turner) doesn’t think their relationship can last and dumps him, while his home nurse’s grouchy attitude starts to wear thin. After a failed suicide attempt (the first sign this is a horror movie you’re watching, not a triumph of the human spirit drama), Allan gets a new lease for life after being introduced to Ella—a Capuchin ‘service monkey’ gift from his friend Geoffrey (John Pankow).

Even at this point, Monkey Shines could be mistaken for being an uplifting story about a handicapped sportsman who forms a special friendship with a little monkey that helps him get his life back together. Maybe even with a sad ending where Allan’s animal buddy dies? I’m spitballing. The movie is shot very much like that type of maudlin tearjerker (even down to its tinkling piano score by David Shire), but the screws begin to tighten once it becomes clear that Ella’s protectiveness of Allan is turning overzealous.

And, for his part, Allan starts placing too much value on his monkey’s importance over other people trying to help him, with the exception of pretty quadriplegia specialist Melanie (Kate McNeill). Then things get stranger, with Allan developing a nighttime psychic connection with Ella (able to see through her eyes as she runs around) and, during one memorable moment, exhibits simian traits as their bond grows worryingly deeper. 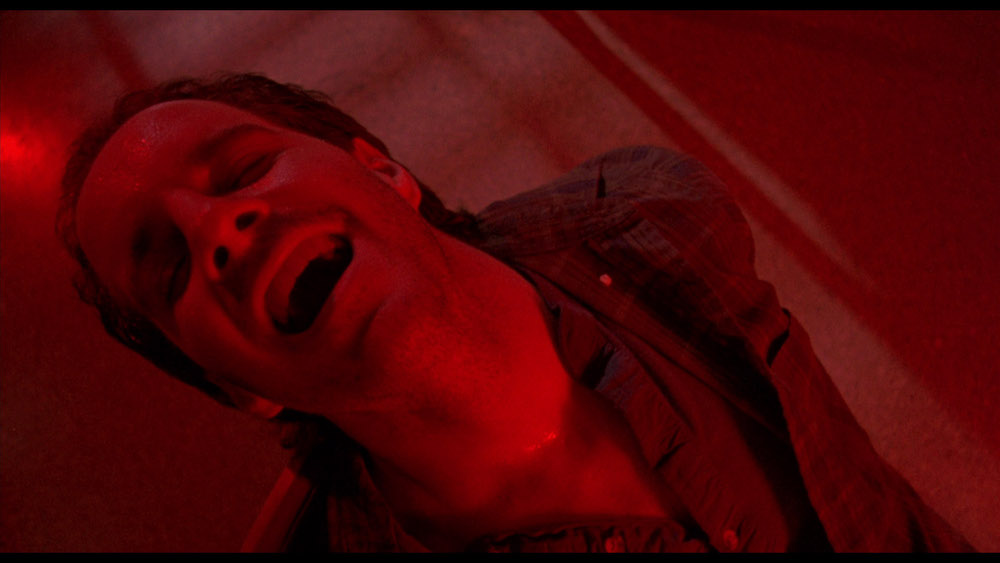 I was disappointed Romero didn’t pursue some of this story’s weirder elements more confidently, as there are times when Monkey Shines veers into Outer Limits territory: Allan’s scientist friend Geoffrey has been experimenting on Ella and the other highly intelligent monkeys by injecting them with human brain tissue. But, of course, Romero’s more comfortable going for the clearer visceral shocks of seeing a broken man become physically dependent on a creepy monkey that throws hairdryers into bathtubs to electrocute those it perceives as threats to its “master”. Eventually, of course, the distinction between “master” and “slave” gets blurred in Ella’s marble eyes.

Monkey Shines was meddled with by Orion, who insisted it end on a happy note and be considerably shorter than the 240-page screenplay suggests it might have been. While it’s common to side with filmmakers in situations like this, Monkey Shines feels like its 113-minutes should actually have been further pared down to 90. I can’t imagine a four-hour Romero-approved cut being a marked improvement, as things are already muddied with too many weird subplots. The core drama of an injured man at the mercy of a murderous monkey is enough to concentrate on, but Romero thought otherwise… 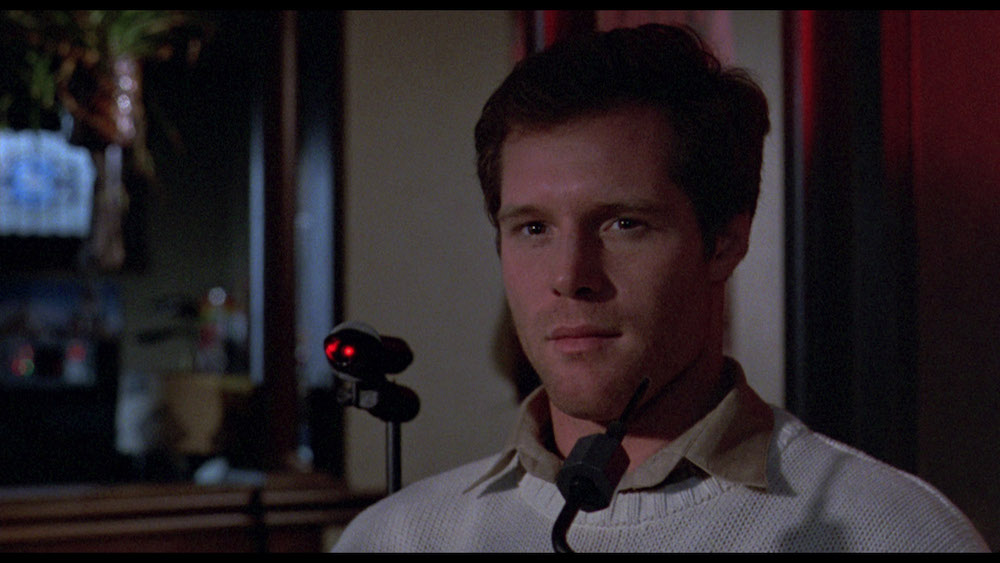 That said, perhaps Romero’s intended version would’ve spent more time showing us Allan’s pre-accident life as an athlete and boyfriend, so we truly feel the pain of what his life becomes. More problematic for Romero was Orion adding their own “shock” into the climax after poor test screenings—although I found that moment to be an effectively bonkers jolt. Nothing flags Monkey Shines as being a ‘jump-scare’ kind of horror, so delivering one at random definitely delivers what it was supposed to.

The performances are all decent, but Jason Beghe as Allan is on particularly great form considering he can’t move anything below his neck. He’s not an actor I had any awareness of beforehand (although he looks so much like a young Michael C. Hall I was convinced there might be a family connection), but Beghe does a terrific job walking the fine line between human drama and creepy weird horror. Still working today, Beghe became more famous for his 13 years as a member of the Church of Scientology from 1994. He’s now a prominent critic of this religious movement and has appeared in various whistleblower videos and documentaries. One actor I do know is John Pankow, although he’s almost unrecognisable here if you know him best from playing a blowhard TV producer on Showtime’s Episodes. And there’s a fun early role for Stanley Tucci, with hair, as the egotistical surgeon who saves Allan’s life.

I’m sure Romero only saw Monkey Shines as a dispiriting dalliance with the Hollywood studio system (it made less than it cost to make, $5.3M), but there’s enough good stuff here to recommend it. You certainly don’t see many horrors movies about quadriplegics (although Upgrade’s a notable recent example), let alone a horror involving a killer monkey holding someone hostage in their own home. There are a few too many distracting subplots and side characters we don’t care about (this would work better as a single location two-hander between man and monkey), but its problems are interesting ones to think about… and I was never bored by it. 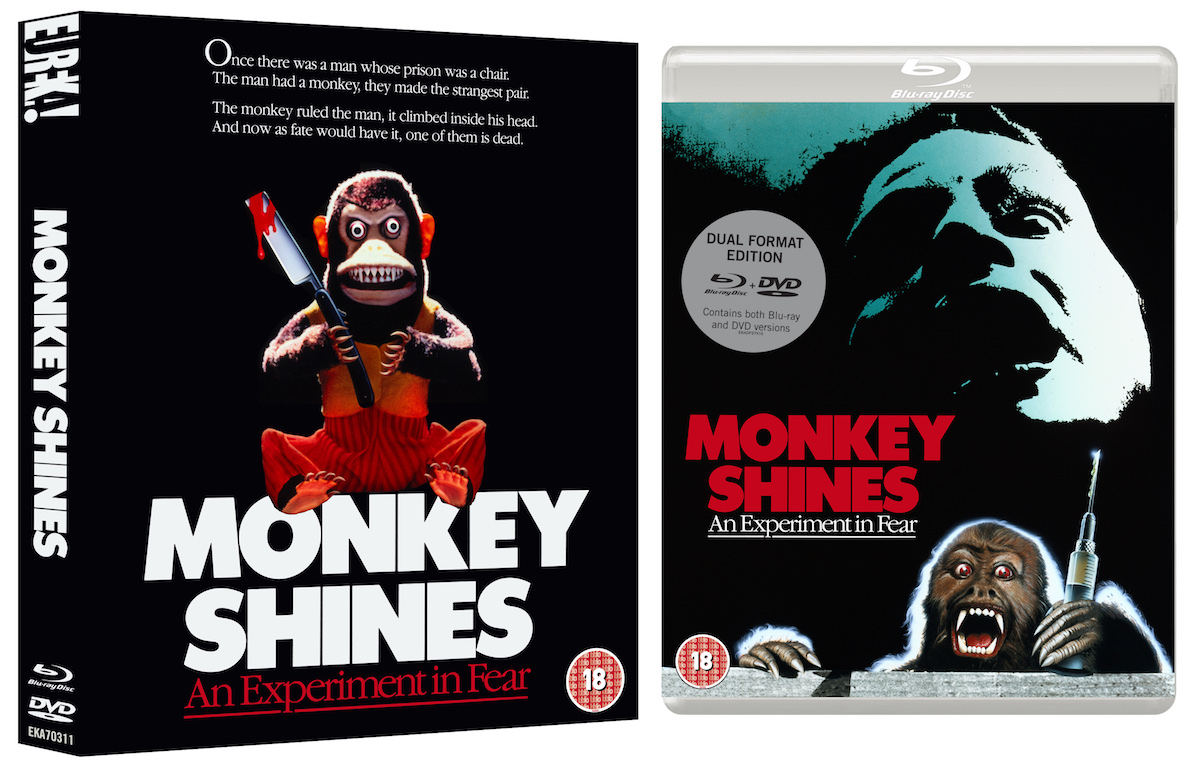 Eureka Entertainment brings Monkey Shine: An Experiment in Fear to Blu-ray with a good 1080p transfer of its 1.85:1 image, that has strong details and retains a patina of film grain. This only bothered me during the darker scenes, of which there aren’t too many. Colours are decent (although some flesh tones are a bit hot), but the picture doesn’t leap off the screen because the movie’s intentionally quite muted.

The DTS-HD Master Audio 5.1 is robust with clear dialogue, although the mix is weighted to the front speakers. I don’t recall much happening in the rears at all, actually. It’s an improvement on the included original stereo, especially for David Shire’s music and the added bass levels.

Written By
Dan Owen
More from Dan Owen
February is less than 24-hours away, so below you’ll find Frame Rated’s...
Read More