François Simard, Anouk Whissell, and Yoann-Karl Whissell (Canadian filmmakers collectively known as “RKSS”) made a splash with low-budget cult indie Turbo Kid (2015), a nutty post-apocalyptic 1980s-infused comedy action-adventure superhero movie. That breakthrough had its roots in a short they made, T is for Turbo (2011), and beforehand they were making an array of throwback gorefests and ’80s-inspired genre mashups and fake trailers.

Summer of 84 continues their fascination with the ’80s, but it’s a big creative leap forward. You wouldn’t guess it came from the same triad, as it’s more restrained and classic in its style and tone. I’d loosely compare it to seeing Troma’s James Gunn go “legit” with Guardians of the Galaxy (2014). There are surprises along the way that give it some edge, but it could have used more swerving of expectations, frankly. But the script (not written by the directors) seems content to draw its narrative out, and only really starts thumbing its nose at predictability near the end. 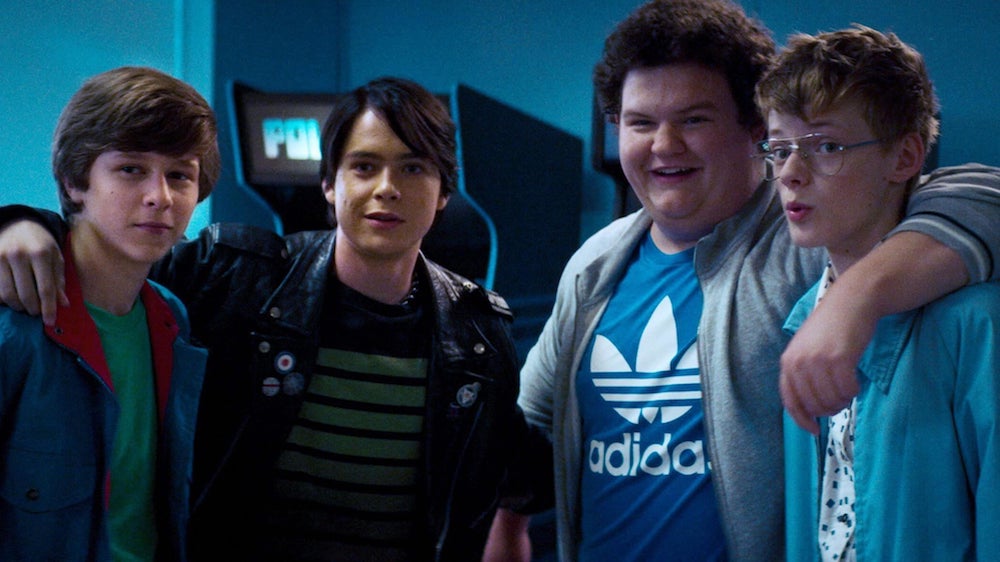 You know where you are with Summer of 84, at least to begin with. It’s a nostalgic riff on those ’80s adventure movies where a bunch of kids get into mischief together, usually involving aliens or monsters. Although I’m starting to wonder if there was genuinely an ’80s trend, or if my generation simply watched The Goonies (1985) and Explorers (1985) on such heavy rotation we got a skewed perspective on what the decade was putting out.

Either way, the blockbuster adaptation of Stephen King’s It (2017) and Netflix’s Stranger Things tapped into the current appetite for ’80s spookiness, and Summer of 84 will inevitably be compared to the latter. But it’s notably different because the story here is more down-to-earth and doesn’t mimic the era’s biggest hits too slavishly- although it does have the cliches like the gang riding around on BMX bikes, and using binoculars to spy on girls getting undressed in their bedrooms. You know you’re in ’80s movie-land when teenage girls are taking take their bras in well-lit rooms with the curtains open at night, as this never happens.

Here, 15-year-old Davey Armstrong (Graham Verchere) starts to suspect his podgy neighbour, police officer Mr Mackey (Mad Men’s Rich Sommer), is serial killer ‘The Cape May Slayer’, responsible for the disappearances of 13 local teenagers. Determined to prove his theory and become a hero, Davey and his friends decide to investigate Mr Mackey by themselves and gather irrefutable evidence before going to the authorities with their findings.

The characters here fit into the standard trope of ’80s child gangs: lead Davey is the relatively normal one with an interest in the paranormal, Dale “Wood” Woodworth (Caleb Emery) is the chubby sensitive one, Tommy “Eats” Eaton (Judah Lewis) is the cool kid with a black leather jacket, Curtis Faraday (Cory Gruter-Andrew) is the clever geek with glasses, and there’s a sexy blonde love interest neighbour called Nikki (Riverdale’s Tiera Skovbye). They’re analogous to the core characters of Stranger Things, but also many other ’80s child ensembles, and the situation they find themselves in reminded me of Fright Night (1985) with its own enemy-next-door provocation. And that Tom Holland movie was itself a vampiric riff on Alfred Hitchcock’s Rear Window (1954).

For maybe an hour, Summer of 84 does exactly what one would expect a Spielbergian serial killer mystery flick with kids to do. The gang spy on Mackey, finding suspicious activity and weird coincidences to indicate he might indeed be a murderer, but it’s never quite enough for them to risk going to the cops and looking like paranoid idiots. But, without spoiling things, at a certain point writers Matt Leslie and Stephen J. Smith realise their script’s got stuck in a cat-and-mouse holding pattern (not even giving us other suspects or red herrings), so they decide to have a little fun with our assumptions.

The story starts doing “climactic” things earlier than expected and ultimately goes in a direction that upends the comforting vibe we’ve been acclimated into. There’s something “safe” about nostalgia involving junior heroes. You don’t expect things to get too vicious and disturbing with underage kids involved, but Summer of 84 benefits from taking risks of taste towards the end. I was just disappointed it didn’t take this approach a little earlier, or avoid the flabby middle by cutting a quarter-hour from the second act. That might have tightened the plot up a little, making it more of a concentrated dose of mischievous boys-own adventuring that turns nasty.

The RKSS trio are already working on a sequel to Turbo Kid, and this movie also leaves the door open for seconds—Summer of 88, anyone? It’s by no means a perfect cult gem, because the actual “mystery” is non-existent, the characters are all stereotypes lifted from other movies, it’s littered with uninventive jump-scares (like walkie-talkies that loudly burst tense silences), the buildup goes on much too long, and I’m not sure the tone was nailed exactly… but the performances are all good, it doesn’t club you over the head with its ’80s-ness after the first half-hour, and the ending’s memorably dark and not what one expects based on the premise and initial tone.

For me, the good stuff outweighed the bad—just about. I was entertained and appreciated the bold choices that eventually came, despite how open-ended the ending felt. Some may feel unsatisfied by it. And as someone who found Turbo Kid too aggressively madcap, seeing these filmmakers produce a quieter movie with a subtle touch was a welcome surprise. I’m now very interested to see what RKSS do next. I mean, after whatever retro zaniness Turbo Kid 2 blasts into our eye sockets.