As we head to the season finale, “Loose Lips” re-arranges the furniture on The Man in the High Castle, and although it’s another slow-paced episode that could’ve done with some vigour, its concluding revelations are worth the journey.

Over in the alternate reality, Nobusuke Tagomi (Cary-Hiroyuki Tagawa) has slowly realised that he’s the problem causing the family to fall apart. On the surface it appears to be something about breaking a teacup and upsetting his newborn grandson, but deep down he understands he must confront a psychological crisis. 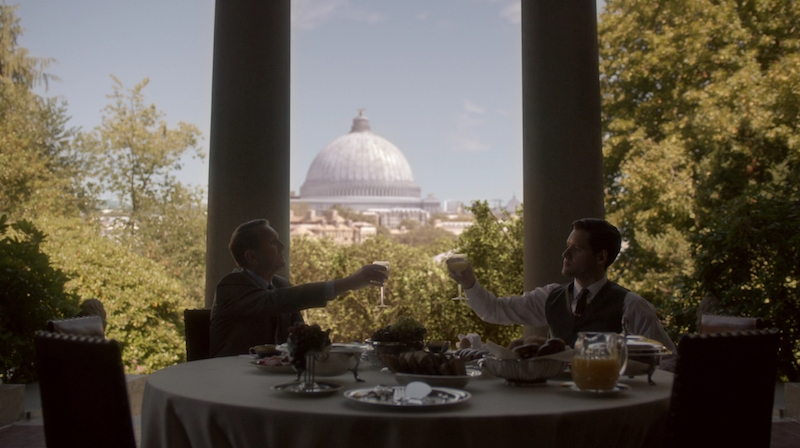 His bright idea to repair the cup (nodding back to Juliana’s conversation with Lucy about Kintsugi, the Japanese art of repairing broken pottery) is a huge and obvious metaphor for the micro and macro relationships in both realities. Everything is falling apart, is in dire need of restoration, and the certainties in both worlds are questioned as the end of one dictatorship paves the way for its replacement.

However, back in Japanese-occupied San Francisco, no one seems to have noticed Tagomi’s disappeared. There have been no urgent searches for their missing Trade Minister as they hover on the brink of nuclear holocaust. Surely he has urgent meetings and events to attend? We also don’t know what happened to the alternative-world Tagomi. From all indications he wasn’t a happy man, and all we know is that he disappeared into a fog by the Golden Gate Bridge. Juliana’s brief pause for silence when she reveals this suggests his alter-ego may have committed suicide. 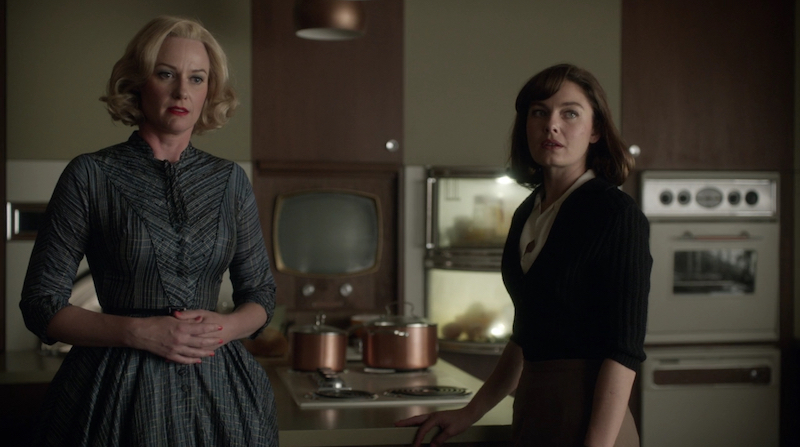 One wonders why the show’s writers put Tagomi in this alternate reality, and I presume there will be a jolly good reason now that this reality’s Juliana has brokered his reconciliation with wife and son, he’s repaired the cup, and accepted Juliana (Alexa Davalos) as his daughter-in-law. This offers a lighter tone in contrast to the doom-laden mood of the rest of the episode, and it does add much needed emotional qualities to someone who’s effectively in the employ of an oppressive Japanese government. This Tagomi appears to have found his way out of the fog.

In Nazi-occupied New York and Japanese-controlled San Francisco, the situation is dire. Following on from Himmler’s phone call to John Smith (Rufus Sewell) at the end of the last episode, Hitler (Wolf Muser) has slipped into a coma and is about to take his last halting breaths. The Reich is battening down the hatches, attempting to keep the news secret, but in Berlin there is an almighty power struggle underway. It’s all about who will occupy Hitler’s place and preserve the machinery of dictatorship. 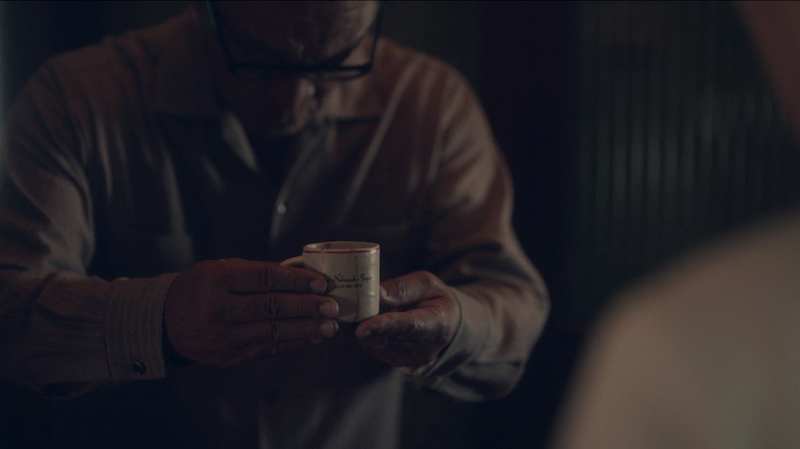 Enter Joe Blake’s father, Reichsminister Heusmann (Sebastian Roché), who is invited to assume the mantle of Acting Chancellor. Heusmann indicates this a poisoned chalice and he will be squarely to blame for whatever happens from this point forward. It will make Berlin a dangerous place as the power struggles continue and he orders Joe Blake (Luke Kleintank) back to New York for his own safety. At first, Heusmann does not expect to survive for long but by the end of the episode we realise he’s been playing his cards very close to his chest.

In New York, John Smith is apprehensive about the news of Hitler’s imminent demise. As he ponders the power struggle in Berlin, he decides it is time to let Juliana know why she has been granted asylum in the Reich. In an effective scene, he turns all the power off in her apartment, to ensure their conversation is off the records of those spying on her, and settles down with her for an interrogation. 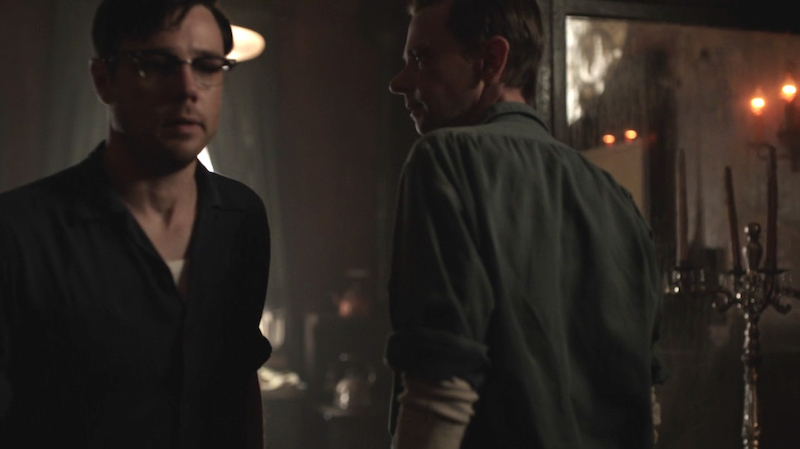 She confesses that she did meet the Man in the High Castle and has seen the film where Joe Blake executes Frank Frink (Rupert Evans). John Smith seems to believe her and perhaps he considers the events in the film as a possible outcome of the current chaos seizing the Reich. It’s a chilling reminder that Smith saved Juliana for this one purpose, as a means to an end.

Juliana continues to cultivate her membership into the Third Reich Wives Club, where Lucy’s (Emily Holmes) gossip about the possible death of Hitler, borne out by the old footage of the Fuhrer playing on TV to suggest he’s spending time at his mountain retreat, sends her straight to the phone to inform George Dixon (Tate Donovan). I really rather like the gossipy relationship between Lucy and Juliana, and it’s wonderfully undercut here by Helen Smith’s (Chelah Horsdal) deep displeasure that they’ve reduced themselves to chattering women when the first duty of every woman in the Reich is to her household as wife and mother. Such speculation about Hitler is considered treason and Helen’s attitude underlines the fact that they must accept the demands of living in a dictatorship. She reminds them that “every choice that you make is no longer about your future alone. Everything changes.” 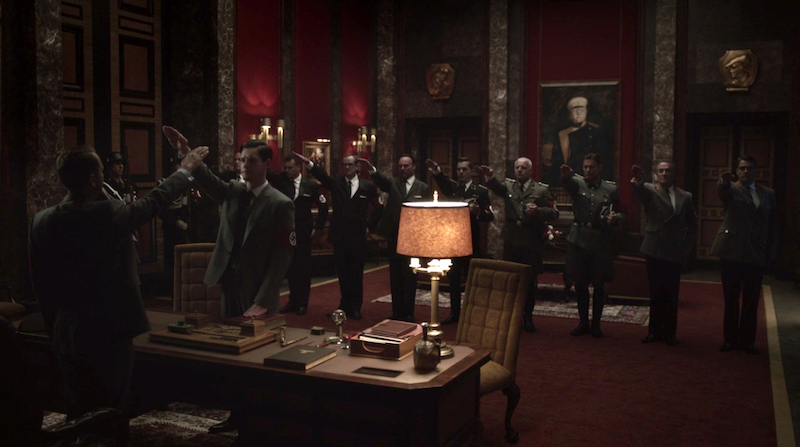 However, while the SS are on high alert, even the Kempetai’s Inspector Kido (Joel de la Fuente) is confronted with Nazi defectors leaving Berlin in fear of what might happen once Hitler dies. One defector brings him some interesting intelligence and confirms that the Crown Prince was shot by Nazi agents and not by the Resistance. The fragile cooperation between Kido and Smith to hunt down the Man in the High Castle is concluded with a very terse scrambler phone call. It’s basically every totalitarian for himself as Berlin descends into chaos and Japan goes on a war footing.

Childan (Brennan Brown) and Ed (D J Squalls) consider a partnership with Frank after the success of their last sale, and now they’re free from the yoke of the Yakuza. However, Frank is focused on resistance and revolution, and demanding Ed’s help with planning the forthcoming bombing campaign. Ed is horrified at what Frank has become and a future partnership is looks increasingly doubtful. The interplay between Childan and Ed is still very appealing but I wonder how long these two are going to last in the series. I doubt they’ll be with us in the next season and that’s a shame. 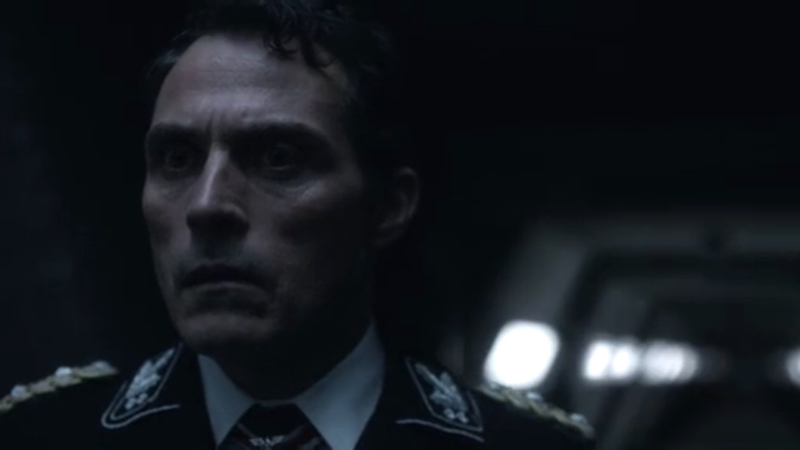 Juliana gets her information to the Resistance but worries she may have created a chain reaction that’ll eventually lead to the events depicted in the film. She asks that word is sent to her stepfather Arnold (Daniel Roebuck) to ensure he and her mother get out of San Francisco. When Arnold visits Frank it comes as a deep shock to Frank that Juliana is alive and working on the same side. He’s rather bitter that Gary (Callum Keith Rennie) and the Resistance have manipulated him all along into believing she’d defected and was dead. Frank doesn’t seem to grasp that in time of war, the truth is a very precious commodity and facts will always be twisted to suit the purposes of those who crave power. Gary offers him a reality check: “this is war. It’s bigger than all of us. So stop making this about your personal bullshit, Frank.”

And talking of twisting facts, we see John Smith put on something of a show for one of his prisoners. Remember Reinhard Heydrich? Heydrich attempted a coup at the end of the first season and tried to persuade Smith to join him. However John Smith warned Hitler of Heydrich’s plan and he was arrested. Smith fools Heydrich (Ray Proscia), now rotting away in a prison cell, into thinking Germany and Japan are at war, leading Heydrich to confirm what Smith has suspected.

Among high-ranking Nazis there remains a desire for war with the Japanese, and the mastermind behind it is Heusmann. Of course, as predicted, Joe Blake now commits himself mind and body to the Nazi cause and helps his father fill the power vacuum left by Hitler’s demise. In a rather chilling final scene he is sworn into the Nazi Party and joins his father, ready to wield power over Berlin. It’s a cracking cliffhanger because Smith also realises he’s too late, that Hitler is dead and Heusmann has already taken control.

DOCTOR WHO – ‘Legend of the Sea Devils’